The cliché goes that you have to be crazy to be a goalkeeper. The only crazy thing about them is the lack of respect for their craft.

Crazier still is the rise of Alisson.

Within a week of signing, he was thrust into action when the Brazilian suffered a calf injury in the Reds’ opening-night win over Norwich City.

Adrián soon went from benchwarmer to the hero of the hour in the Reds’ UEFA Super Cup win over Chelsea, stopping Tammy Abraham’s penalty to hand his new club their second European trophy in three months.

As ways to introduce yourself to your new fans go, this wasn’t bad.

The idea of a guy who was West Ham's second choice becoming Liverpool’s – albeit interim – No.1 is bizarre enough. But, as is so often the case in football, this story took another unexpected twist on Friday.

Speaking ahead of Liverpool’s trip to Southampton, coach Jürgen Klopp revealed Adrián was struggling after a pitch-invading fan inadvertently injured the Spaniard when he ran onto the field in Istanbul following the Super Cup win.

In the event, the former Real Betis keeper was cleared to play but was at fault for the Saints' goal – he fired a pass straight into former Red Danny Ings and the ball bounced off the striker and into the empty net. 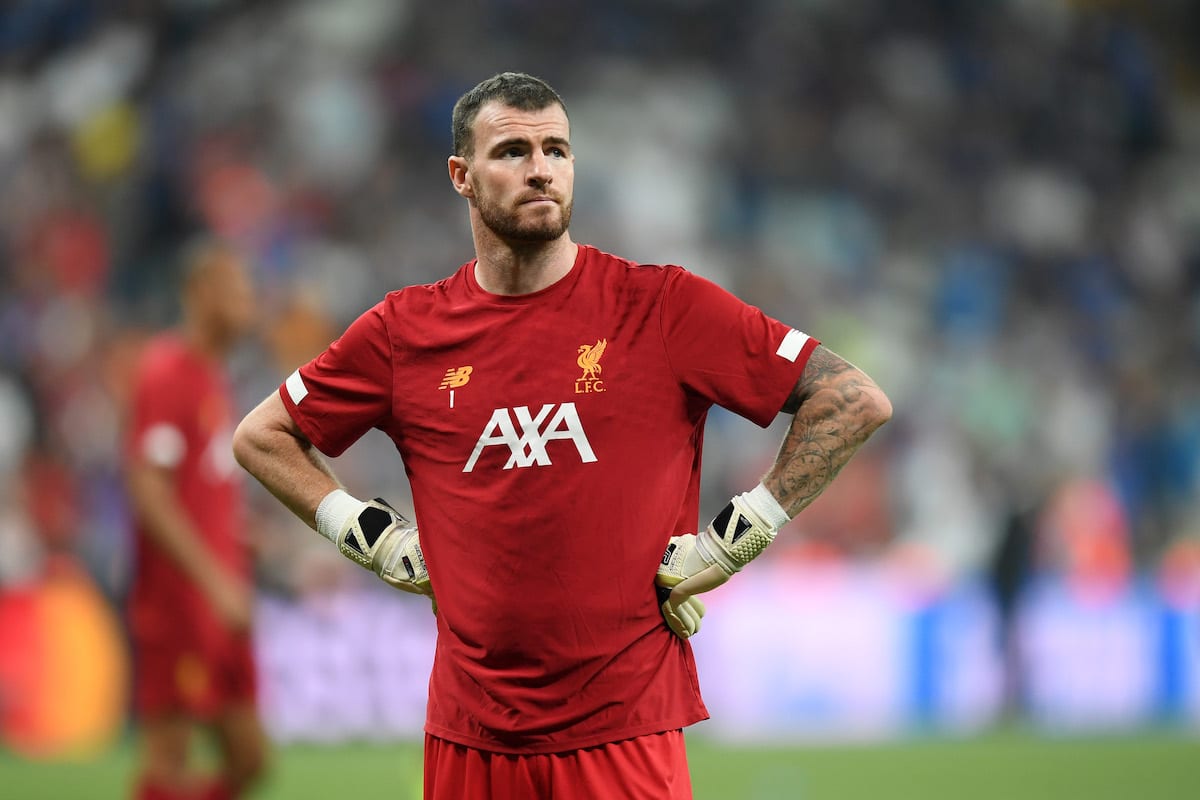 Had Adrián been ruled out, Liverpool would have had Andy Lonergan between the sticks. His last competitive outing came in a 3-1 win for League One strugglers Rochdale over Scunthorpe United on March 23.

Lonergan was on loan at the Dale from Championship outfit Middlesbrough last term. He hadn't even signed to be their No.1. He was firmly behind Darren Randolph and 40-year-old Dimi Konstanstopoulos in the pecking order and was only named as a substitute in the league on ten occasions.

He initially pitched up at Liverpool over the summer to provide goalkeeping cover while Simon Mignolet completed his move to Club Brugge and to give Alisson time to rest and recuperate following Brazil’s Copa América win. It was never on the cards that he would actually sign or play.

In fact, it’s not since the 2015/16 season with Fulham that Lonergan has been anyone’s No.1. Stop-gap stints at Wolves and Leeds preceded his switch to Boro but the veteran stopper has long since accepted his deputy status.

After all, it’s an increasingly popular role.

Stuart Taylor and Richard Wright made the job famous at Manchester City while Rob Green was ‘the hero of Baku’ after celebrating Chelsea’s Europa League despite being the club’s third-choice keeper.

The Hero of Baku became a Blue on this day one year ago! ?

The rest, as they say, is history… ? pic.twitter.com/Qi9hmd1ts5

Only this summer, City signed Derby County No.2 Scott Carson on loan to provide back-up to Ederson and Claudio Bravo. All being well, the former England international won’t ever be named on the bench for Pep Guardiola’s side, let alone play. But, as Liverpool’s predicament has proven, football has a funny way of tearing up best-laid plans.

It wasn’t always like this. In the not-too-distant past, it was the trend to have two excellent keepers competing for the No.1 shirt.

and David Ospina while Manchester United had David de Gea and Victor Valdes.

In 2017, The Independent ranked every Premier League deputy with Adrián, interestingly, coming out 11th – ahead of then Liverpool No.2 Loris Karius.

The role of the back-up keeper is very important – so we’re told. Without someone pushing the No.1, it’s easy to take your spot in the team for granted. When a goalkeeper signs for a club it’s made clear whether they can expect to be No.1, No.2 or No.3. That isn't the norm in any other position.

With outfield players, every shirt is up for grabs. Even when it’s clear a player is being signed for a rotational role or to one day succeed the senior player in their position, the drop-off in quality is never as stark as in the goalkeeping depth chart.

Notwithstanding the short notice and the fact Lonergan was already known to Liverpool after spending a portion of pre-season with the team, signing him to deputise for Alisson is the equivalent of picking up a jobbing Championship or League One centre forward to stand in for Mohamed Salah.

It’s stranger still that this has happened at Liverpool, a club who clearly place great stock in having a top-class goalkeeper after breaking the world record to sign Alisson from Roma last summer.

Finance isn’t an excuse – not for Premier League clubs at least – but the issue is finding a goalkeeper of sufficient quality who is happy to be back-up or, at best, compete for a starting berth. The Harry Kane conundrum, if you will.

On an almost annual basis, Tottenham Hotspur face the same dilemma in trying to recruit a striker who is happy to play second fiddle to the England captain but able to fill the void in his absence. It’s easier said than done.

And yet, with a Premier League title pursuit and the Champions League to defend, as well as two domestic cups which would be welcome additions to the trophy cabinet, there are plenty of games to go around for Liverpool – or at any other top-six side.

Money, as touched upon, isn’t an issue and if the price of success is having a £20-£30million keeper sat on the bench most weeks but picking up matches in the cups, surely it must be worthwhile?

It's time the role of goalkeeper was treated with more respect.