Borussia Dortmund have been a breath of fresh air this season. With Lucien Favre at the helm and an effective blend of experience and youth in their squad, they are sitting pretty at the Bundesliga summit, unbeaten after 11 games having beaten Bayern Munich 3-2 in a thrilling Der Klassiker showdown at Signal Iduna Park.

Now regarded as genuine challengers to Bayern's German crown, Favre's men are unsurprisingly being likened to the Jürgen Klopp-led Dortmund which captured successive championships in 2011 and 2012.

And while Dortmund fans are understandably cautious in their optimism – they were top under Peter Bosz after nine games last season before a 12-game winless run culminated in the Dutchman losing his job before Christmas – they look like the real deal.

Favre has quickly found a formula and the results have been remarkable. They have scored 33 times in the league this season, while Jadon Sancho, Marco Reus and  Paco Alcácer have helped turn them into one of the most potent attacking forces in Europe. And while the arrival of Alcácer coupled with Sancho's coming of age has proved important, Axel Witsel has been an outstanding addition in midfield.

Considering his commanding performances in Dortmund's engine room after having featured prominently for Belgium – for whom he earned his 100th cap last week – during their run to the World Cup semi-final, it's somewhat surprising that this season is Witsel's first in one of Europe's top five leagues.

The 29-year-old's career has been a little curious. Having emerged as a key figure for Standard Liège while still a teenager, Witsel was snapped up by Benfica in 2011. After a solitary year in Portugal, Zenit Saint Petersburg captured him in a big-money move.

Despite being persistently linked with Premier League clubs throughout his five years in Russia, Witsel decided to write his next chapter in the Chinese Super League with mega-rich Tianjin Quanjian, managed by Fabio Cannavaro.

Witsel turned down a move to Juventus in favour of China, a move which attracted widespread criticism with the Belgian being perceived as choosing a thicker pay packet over the chance to impress at a European giant.

But in August this summer, just three weeks after Belgium's third-place finish in Russia, Witsel joined Dortmund, his appetite for European football having reawakened by playing a major role in his country's World Cup campaign.

Penning a four-year deal, the midfielder said he was “ready to be a leader” for his younger teammates.

Having spent 18 months in China, some expected a transition period. Witsel, hungry to hit the ground running at a top club, had other ideas.

He scored on his Bundesliga debut, during a resounding 4-1 win over RB Leipzig, and hasn't looked back since, thriving in defensive midfield as part of Favre's high-functioning 4-2-3-1. In the Bundesliga this season, only one midfielder – Bayern's Thiago Alcantara – has completed more passes than Witsel, highlighting his role in making the transition from defence to attack.

Witsel often drops deep to receive the ball from one of Dortmund's defenders and uses his creative instincts to find one of his more advanced teammates (only three midfielders have completed more forward passes this season).

Perhaps one of the most impressive demonstrations of what Witsel offers Dortmund came during their thrilling 4-3 win over Augsburg in October. With his side trailing 1-0, the Belgian makes a crucial interception to win the ball on the halfway line. 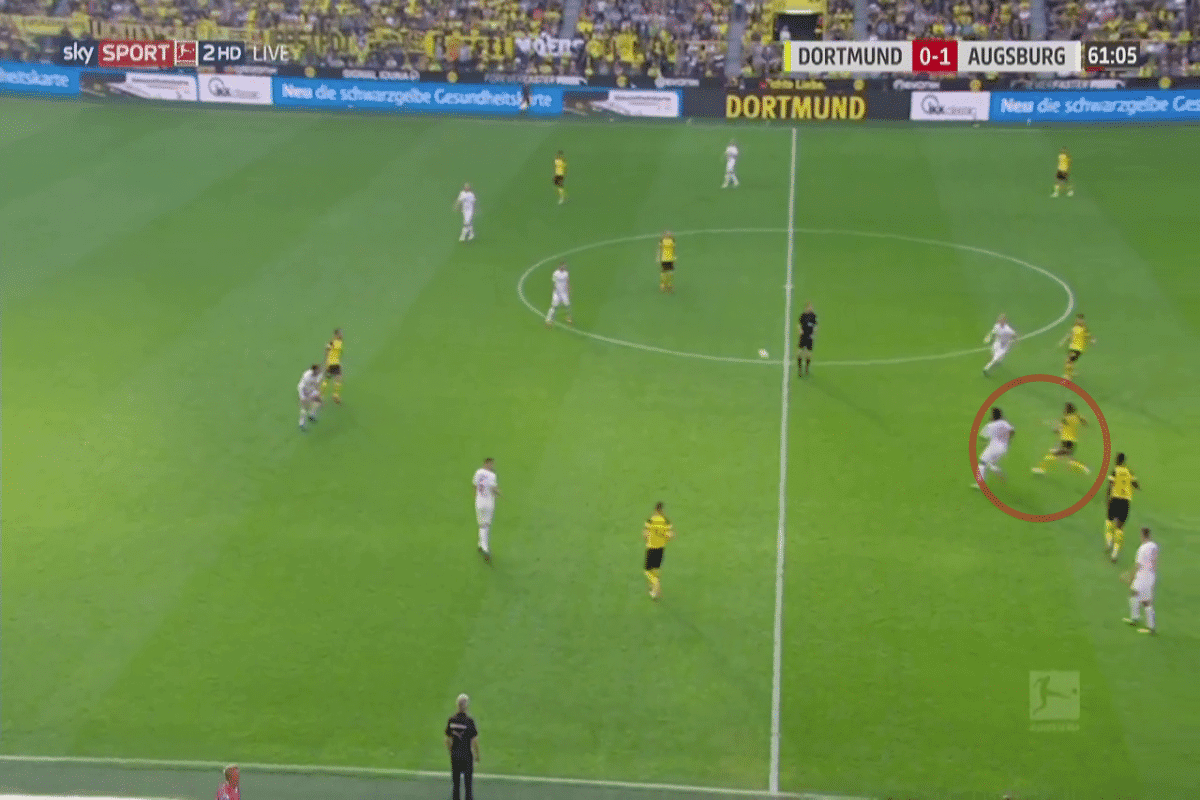 Driving into space, he spots Sancho making a run between two Augsburg defenders. 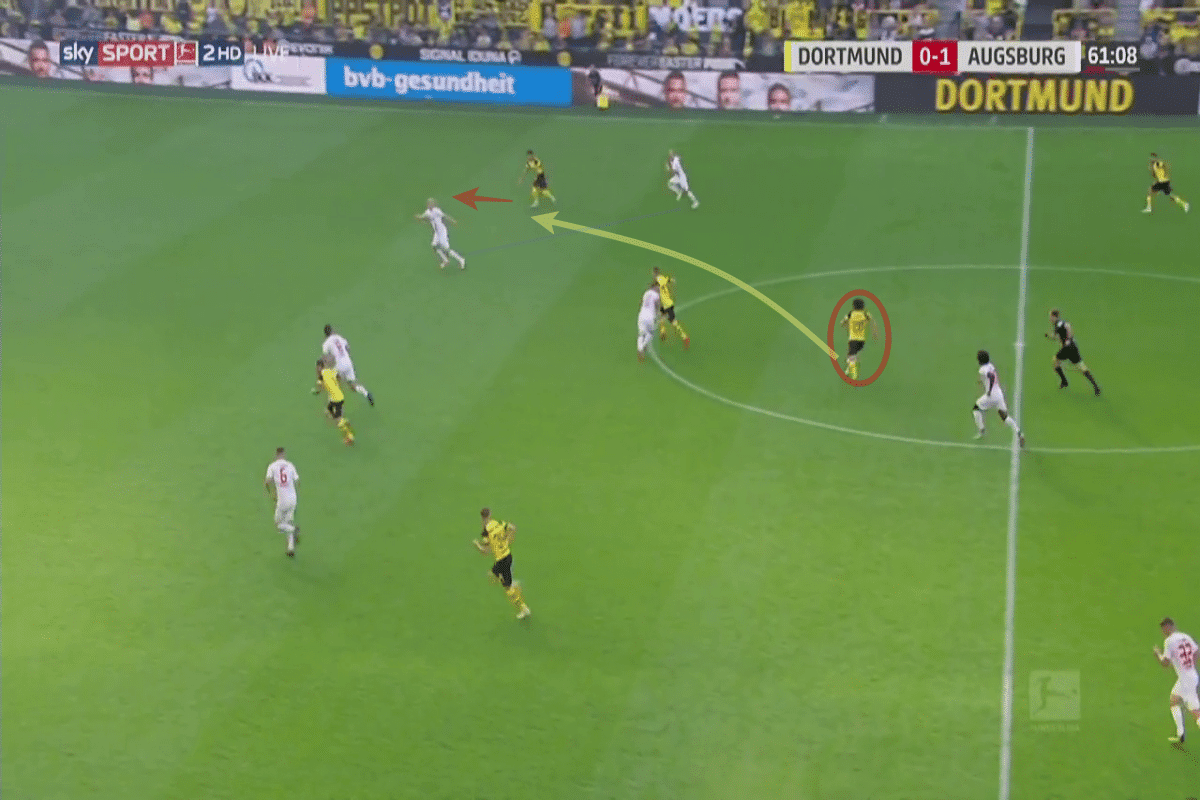 With the technique to match his vision, Witsel curls a ball into the young Englishman's path. 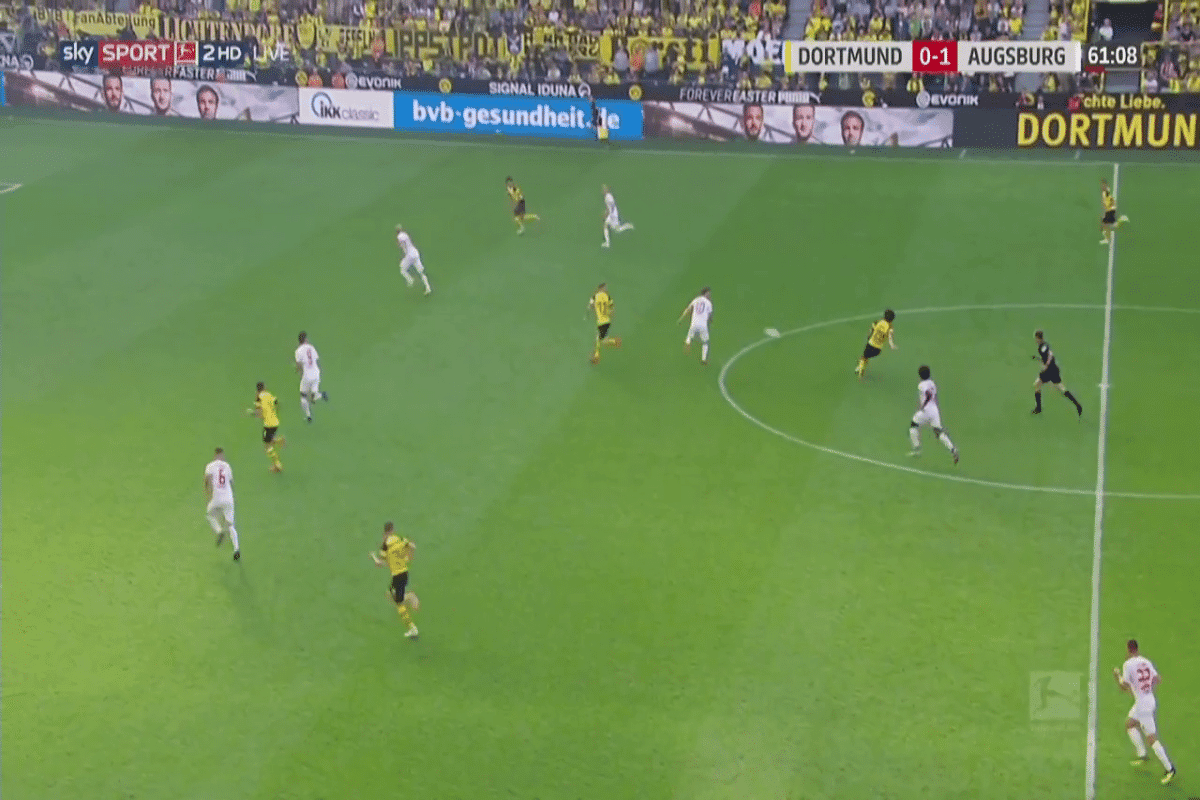 Witsel's intervention allows Sancho to tee up Alcácer for the equaliser, triggering a frenetic finale to the game in which five goals are scored in the final 20 minutes. 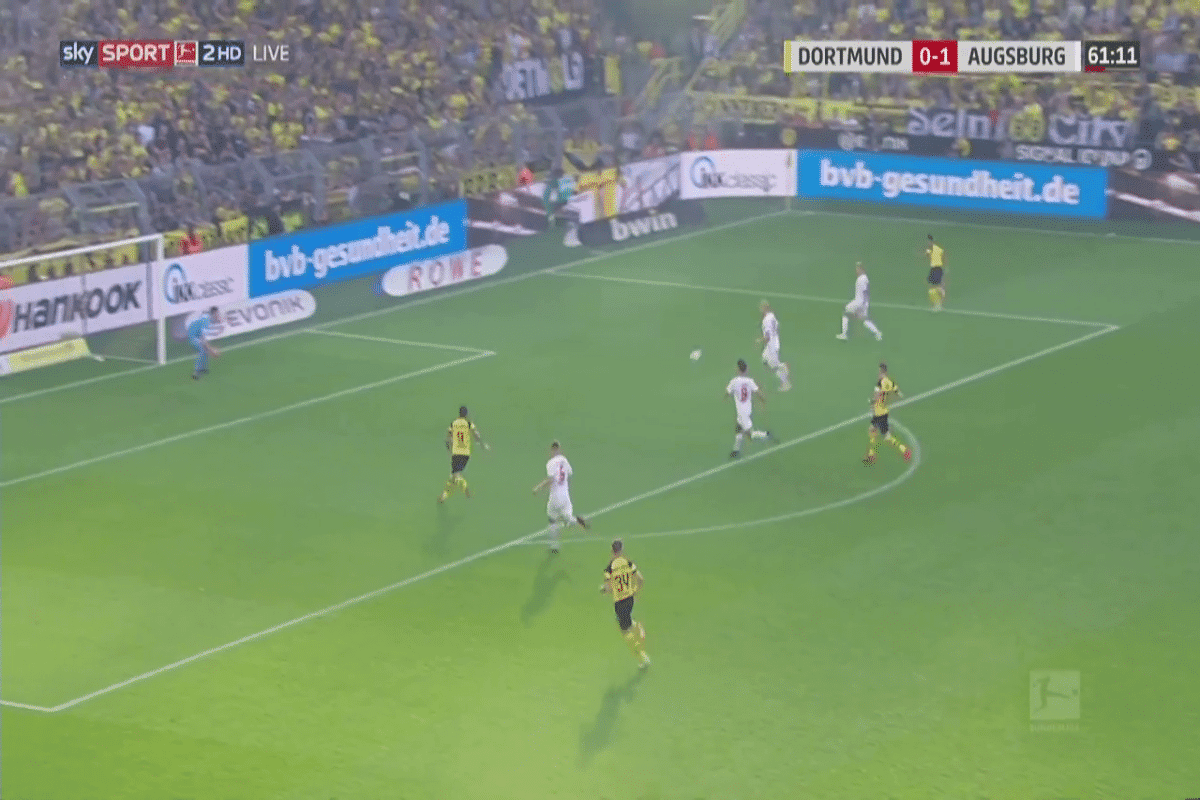 Eager to prove his big-game mentality, Witsel was also hugely influential in the win over Bayern. Relishing an intense showdown with the champions, Witsel was the most accurate passer on the pitch with 96 per cent, created three chances and notched a crucial assist, setting up Alcácer to put Dortmund ahead in the game for the first time.

Again it was an impressive moment of quality from Witsel, driving through midfield before slicing the Bayern defence open with surgical precision to swing the game in Dortmund's favour.

Moments like these have made Witsel an instant hit with Dortmund fans. His capture from Tianjin was a shrewd move on the club's part, too. Experienced, refined but eager to prove his credentials at the highest level, the Bundesliga leaders are reaping the benefits of Witsel hitting his peak, full of confidence after slotting seamlessly into Favre's midfield. 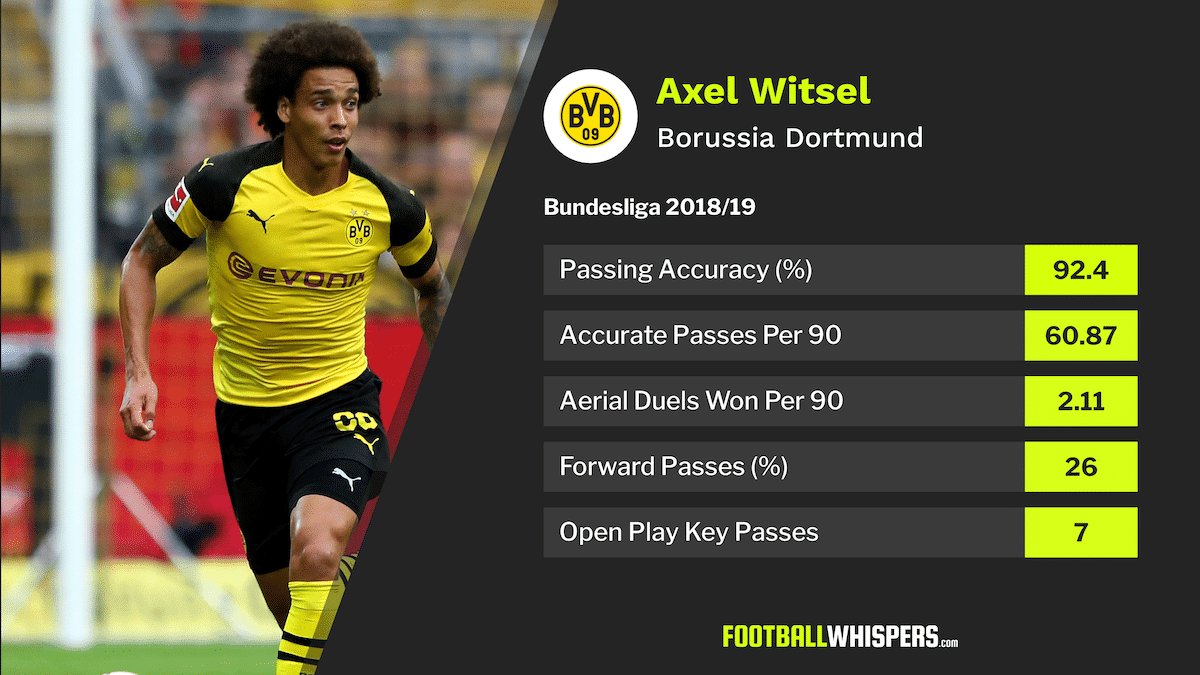 And it's important not to ignore his defensive contributions. Witsel has often seized an opportunity to break up the opponent's attack, whether it be a clean interception, tackle or a tactical foul. Astute, organised and tenacious, he has been as important shielding the defence as he has been in launching counter-attacks.

He seems to have really embraced the club, too. Witsel has always maintained that his family are the driving factor in any decision he makes but they have been able to quickly call Dortmund ‘home.' Indeed, after thumping Atlético Madrid 4-0 in a result that shook Europe, Witsel took his young daughter on a victory lap over towards the adoring fans crammed into Signal Iduna Park.

It was a heartwarming moment – and one which illustrates just how settled Witsel already seems to be.

Indeed, last week he said joining Dortmund was the ‘best decision' he's ever made regarding his career. Considering how things have gone so far, it's difficult to argue with such an assessment.