Manchester United fans watching Aston Villa’s play-off semi-final victory over West Brom this week might have liked what they saw.

Their attention, understandably, would have been focused on Villa’s on-loan centre-back Axel Tuanzebe, a player who is quickly showing signs that he is capable of making the step up to the Premier League.

The 21-year-old was typically dependable and assured at the back as Villa secured their progress – via a penalty shootout – into the final of the Championship play-offs. If they earn promotion, Tuanzebe will have played a big part.

For United, the question now is whether or not the defender can successfully make the leap into the first team at Old Trafford. Ole Gunnar Solskjær’s side, as was proved by a dismal end to the season, are in desperate need of defensive reinforcements this summer.

Tuanzebe, though, remains inexperienced. He has made just eight appearances for United since emerging from the youth setup in 2015, and this season at Villa is the first time he has played regularly throughout a campaign.

Next season, then, might be too soon for Tuanzebe. But his performances this season suggest he has the potential, given an opportunity, to excel in the top flight.

He is certainly cultured enough to play Premier League football. Tuanzebe, in a possession-based Villa team, has made an average of 42.59 successful passes per 90 minutes this season at a completion rate of 85 per cent.

He is commanding in the air, too, winning 3.31 aerial duels per 90. And he is comfortable stepping out of defence, breaking lines with forward passes (17.33 per 90) and occasionally running his way out of trouble (0.5 completed dribbles per 90). That Tuanzebe is equally comfortable at right-back is evident when the ball is at his feet.

Solskjær will, no doubt, be keeping a close eye on the Congo-born defender when Villa meet Derby in the playoff final at Wembley later this month. Tuanzebe has formed a strong partnership with Tyrone Mings, and that helped Dean Smith’s side end the Championship season in impressive form. 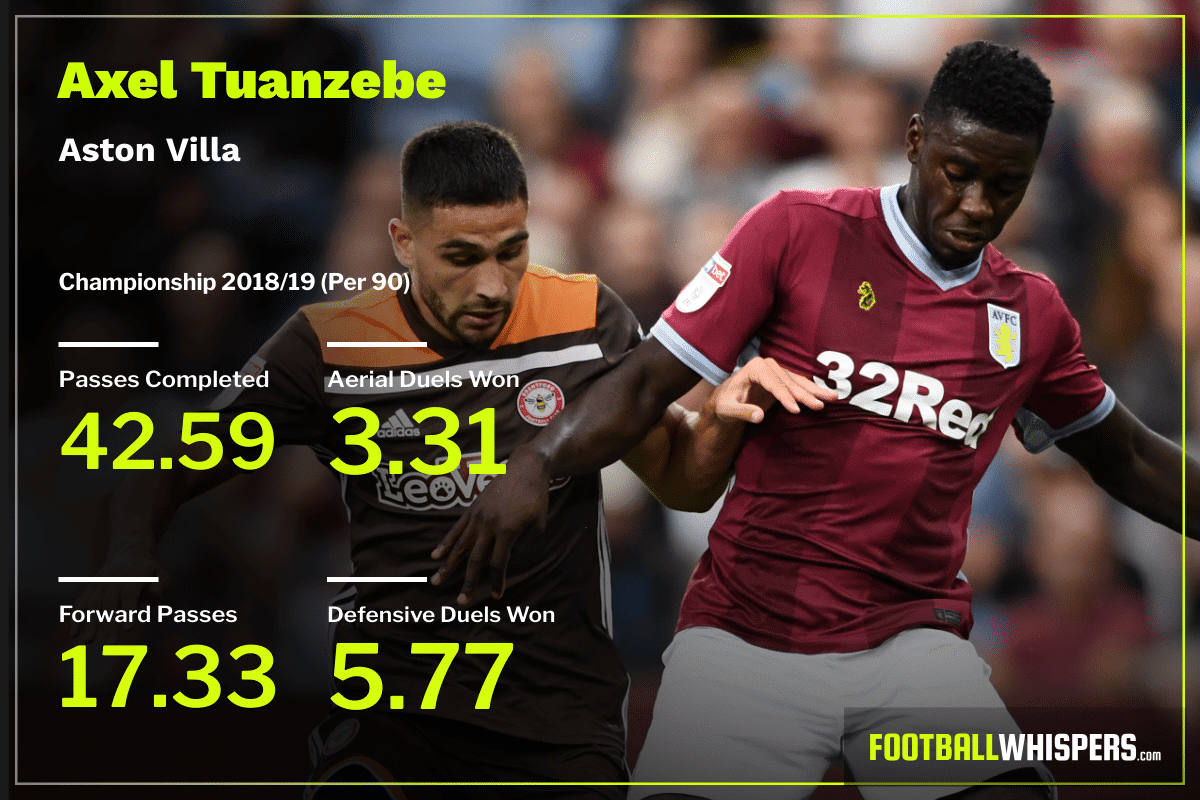 “Hopefully now Axel is going to get to play in the play-off final,” Solskjær told MUTV this week. “He's played well, had a couple of injuries, he's a boy that I can't wait to see in pre-season for us next year.

“I think they (the youngsters) know deep down it's ingrained in our history and tradition that you will get a chance and they know they will get the backing from supporters. I have to say it'll be nice for them to have a full season somewhere and play but then again maybe the best place is here, when you train with the best players in the world and in this environment.

“We've got a history of making them the best. We've got loads of good examples of players being out for a year on loan and coming back as men, so let's see what we decide on these boys. But I can see most of them staying here and getting chances.”

Tuanzebe, then, might find himself with an opportunity to impress in pre-season. His defensive output for Villa this season has caught the eye and, though there are areas of his game which can be improved, the future looks bright for the youngster.

With United in transition, and Solskjær repeatedly emphasising the need to utilise the club’s youth system, Tuanzebe will certainly not be out of the first team picture ahead of the new campaign. With the exception of Victor Lindelöf, United's current crop of centre-backs – Phil Jones, Chris Smalling, Eric Bailly – have hardly convinced this season.

Tuanzebe must consider, too, what his best option is. If Villa secure promotion, there may be the possibility of a permanent move to the Midlands.

“It is not a conversation I have had with Axel,” Villa manager Smith said last month. “Axel is a great player and we all like him here. He’s a great athlete, quick and comfortable on the ball and tactically astute too.”

Whatever happens in the buildup to next season, expect to see Tuanzebe playing in the Premier League in the very near future. He has proven himself in the Championship, and has all the attributes required to become an established top-flight defender in the years to come.