The £60million club-record signing of Pierre-Emerick Aubameyang was the perfect tonic for Arsenal fans still smarting from a loss to lowly Swansea City just hours earlier.

But the arrival of the Gabonese hitman at the Emirates from Borussia Dortmund might not have been greeted so warmly by current Gunners No.9 Alexandre Lacazette.

The Frenchman was himself Arsenal's most expensive ever purchase just six months ago, but Aubameyang's signing seems to signify a lack of faith in the former Lyon man from Arsène Wenger.

Prolific in Ligue 1 for several seasons, Lacazette has perhaps underwhelmed slightly since coming to the Premier League, returning nine goals in 25 outings.

But he has been fielded as a lone striker in a system that hasnt truly played to his strengths, too often requiring him to hold the ball up and drop away from the frontline to link play – tasks the French international can perform to a good standard, but are not his strong suit.

At Lyon, Lacazette thrived with playmaker Nabil Fekir playing in close proximity to him, offering give-and-goes and service in behind the opposition defence. And, when Fekir was out injured in 2016, the Arsenal man, playing centrally in a front three, was aided by the breaking support of Corentin Tolisso, the likes of which has not been on offer in North London.

So the arrival of Aubameyang might ring alarm bells for Lacazette. The pair, while stylistically different, both thrive playing off the shoulder of the last defender and excel at finishing in one-on-one situations, and therefore don't appear to match up well as a partnership.

What's more, Wenger has not regularly used a genuine front two for more than a decade, dating back to the days of Thierry Henry and Dennis Bergkamp working in tandem for the ‘Invincibles'.

The signing of Henrikh Mkhitaryan and the news of Mesut Özil's imminent contract renewal appears to point to the continuation of a front three-based system, or a 4-2-3-1 – either way, there will only be space for one central striker. 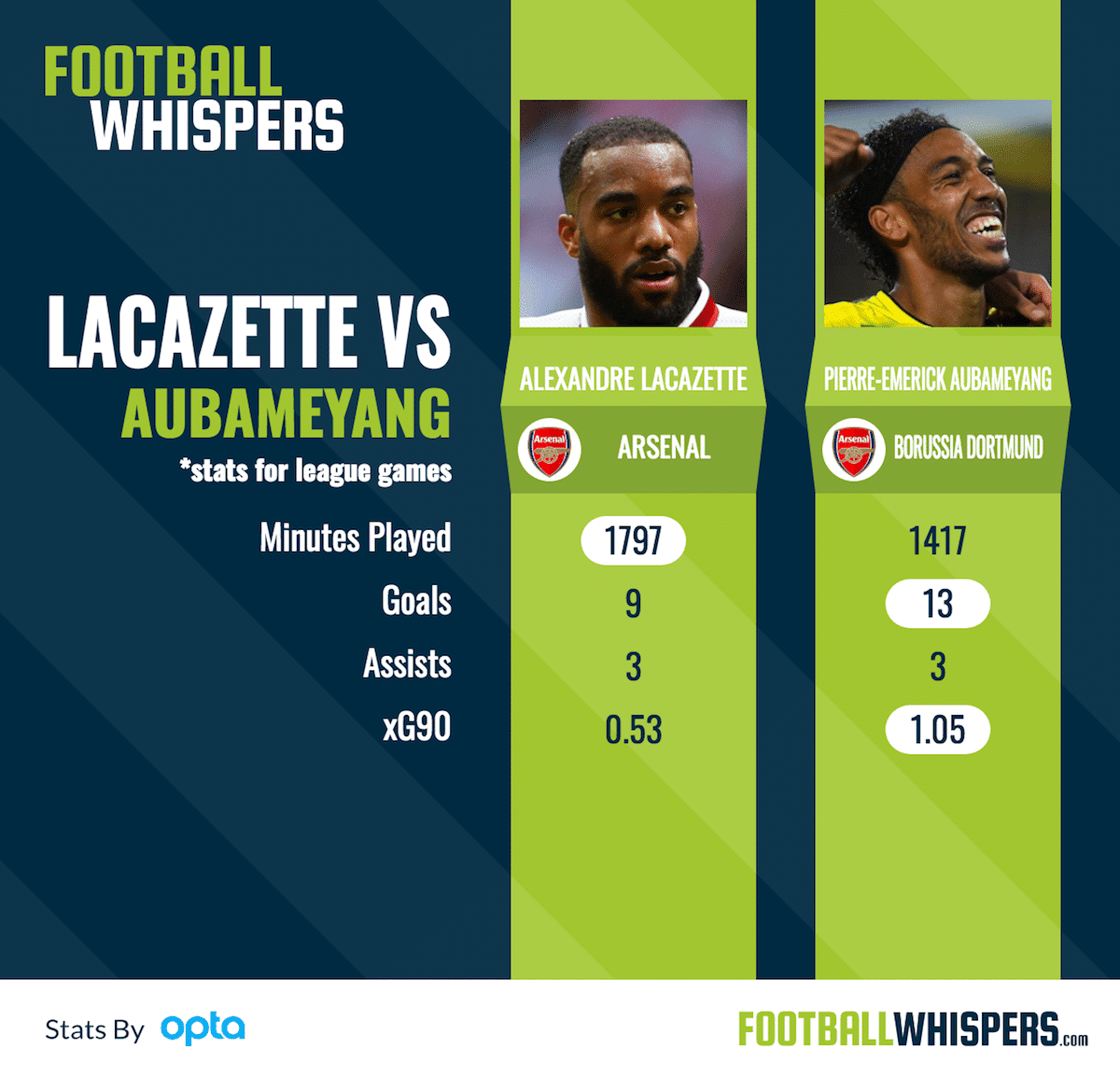 Given the outlay for Aubameyang, the former AC Milan striker is almost certain to be fielded in his favoured role.

Lacazette and Aubameyang both started out as wingers, but neither has played wide consistently for four years, now accustomed to the intricacies of centre-forward play and revelling in the glory a goal-scorer received. Asking either to revert to a wide role would be to grossly misuse their strengths.

If it comes down to a straight choice between the two, as the above graphic shows, Aubameyang represents the most attractive option. He has outscored Lacazette this term, while his stunning expected goals per 90 minutes (xG90) average of 1.1 shows just how astutely the Gabonese seeks scoring opportunities.

The possibility of Aubameyang's raw speed and lethal finishing being fed by master creators Özil and Mkhitaryan is mouthwatering for Arsenal fans. In this equation, however, Lacazette is the odd man out.