Despite a club-record outlay of more than £140million over the summer, defeat to Manchester United on Sunday means that Everton sit 18th in the Premier League, with just four points to show from five fixtures.

The Toffees started the season brightly, beating Stoke City on the opening weekend thanks to a goal from returning hero Wayne Rooney, followed by a credible draw at title favourites Manchester City.

But things have since gone sour for Ronald Koeman's men, without a win in six outings and in danger of being cut adrift in the race for the top-six finish they had their eyes on.

After back-to-back 3-0 defeats to Tottenham Hotspur in the Premier League and Atalanta in the Europa League, Everton were not expected to make any waves when they travelled to Old Trafford to take on José Mourinho's men, and few would have been too surprised by the eventual 4-0 scoreline in favour of the hosts.

However, the Merseysiders were competitive for long stretches of the game, and even shaded possession with a 50.8 per cent share, making more passes than the home side (510 to 476).

An early wonder-strike from Antonio Valencia stacked the deck against them, and individual errors late on contributed to a score that flattered United. But it was the Toffees' lack of an outlet in forward areas that ultimately cost them.

Everton arrived at Old Trafford with a plan to sit eep and frustrate the 20-time champions, then, ideally, make effective use of the ball when they won it by getting the likes of Rooney and record signing Gylfi Sigurðsson into advanced positions.

But Valencia's fourth-minute strike forced Koeman's side to adopt a more proactive approach, only to be let down by a lack a pace in attack.

Operating with such a deep defensive line makes breaking forward incredibly difficult without the option of either a targetman up front, holding up play and waiting for support, or a player with the pace to over distance, be it a centre-forward running the channels or a winger carrying the ball forward from deep.

Against United, Everton showed they have neither. 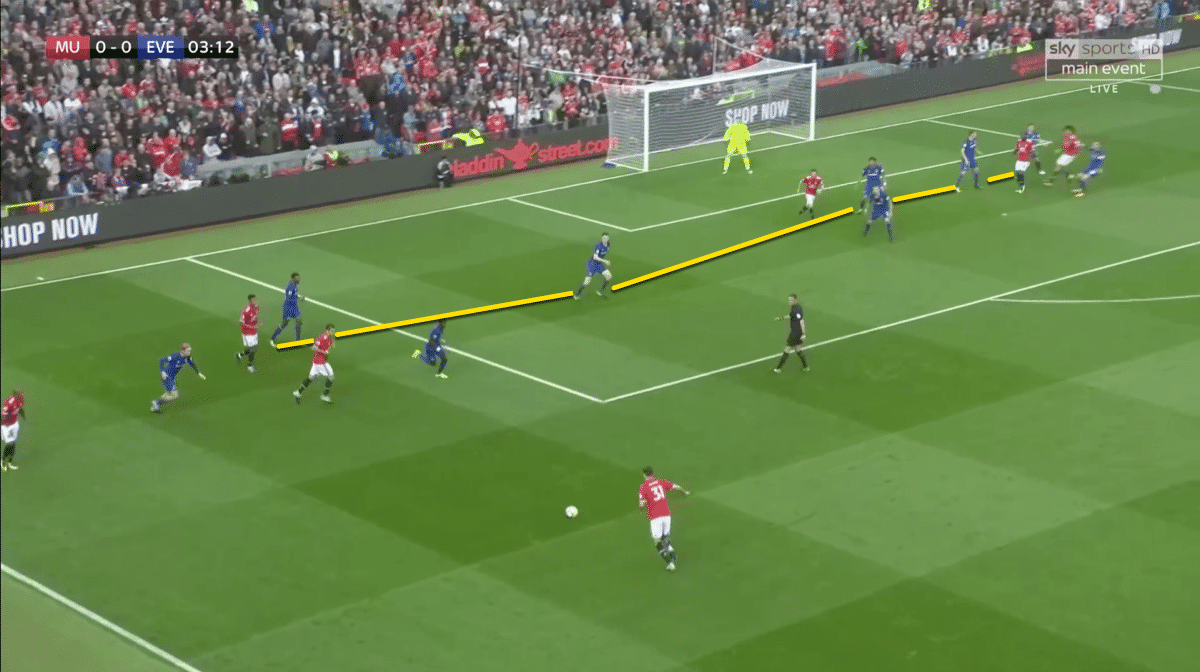 Above, we see just how deep they were holding their defensive line in the build-up to the opening goal. Everton were overpowered in the early exchanges but soon recovered a foothold, enjoying spells of sustained possession. 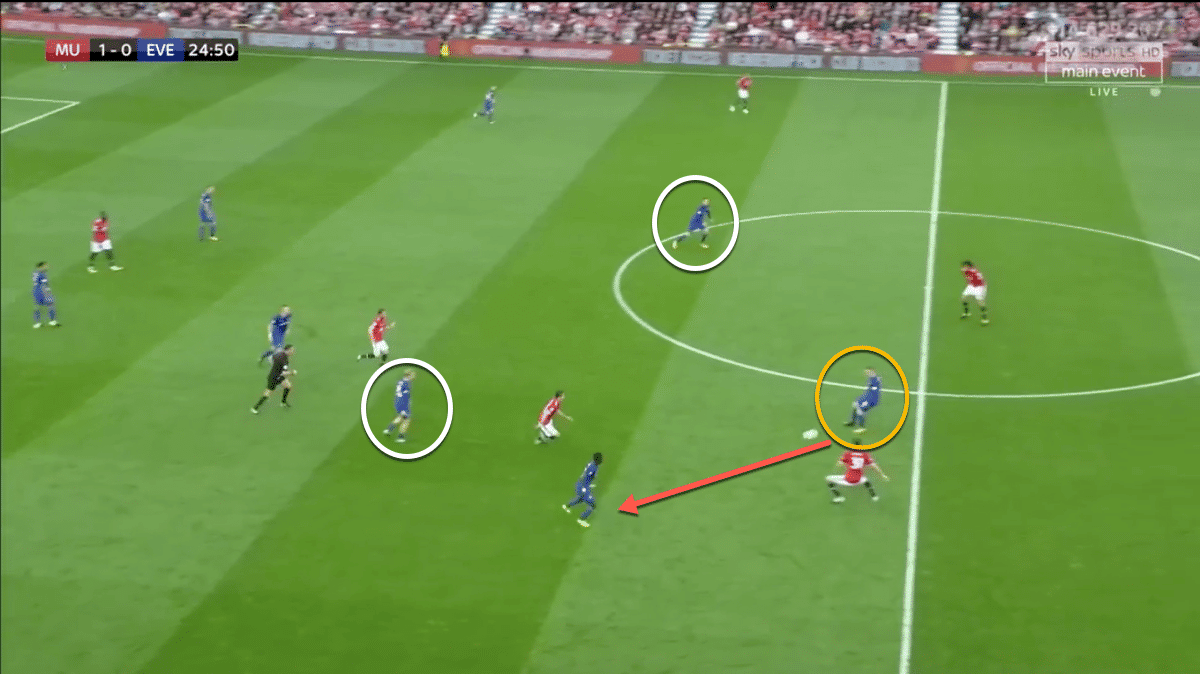 However, as we see here, Rooney (circled yellow), playing at the point of attack in Everton's 3-4-3 formation, constantly came towards the ball to exert his influence on the game.

This wouldn't have been an issue if the Toffees were able to send runners beyond the former United and England captain. But, with Sigurðsson and Tom Davies (both circled white) flanking the 31-year-old, this wasn't a readily available option. In this instance, Rooney instead lays the ball off, backwards, to Cuco Martina.

As a result, Everton‘s offensive play was always in front of the United back four, with no real threat in behind aside from the rampaging runs of right-back Martina who was looking to exploit the defensive weaknesses of Ashley Young on the left of United's defence.

The Price Of Selling Lukaku

For all Everton's spending this summer, the £75million sale of Lukaku, who scored against them for United on Sunday, means they might have ended up making a net loss in terms overall quality.

The powerful Belgian forward's pace in behind means he is able to offer an out-ball in the channels, and, as he has shown since arriving at Old Trafford, his ever-improving hold-up play is an asset to any team he's in. 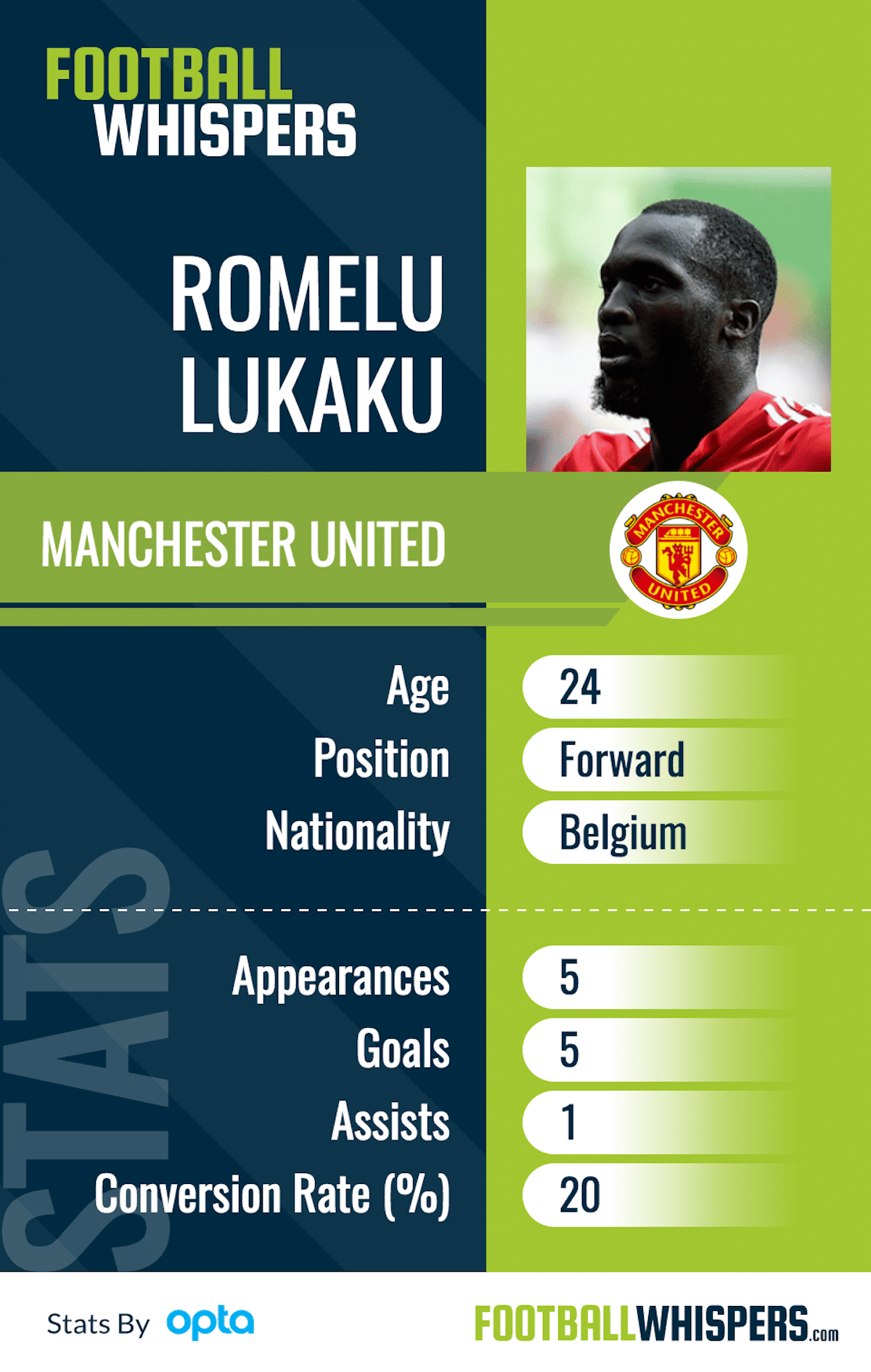 Keeping Lukaku wasn't really an option for the Toffees: the player had made his desire to leave clear and they received a good fee for a striker who is young, gifted and experienced, yet still has holes in his game.

However, the club's efforts to replace the former Anderlecht and Chelsea attacker have, thus far, come up short.

Rooney came in on a free transfer from United, but England's all-time leading scorer is more comfortable as a No.10 and lack the dynamic pace of his earlier career.

Sandro Ramírez, picked up from Málaga for just £5.2million, could prove to be one of the bargains of the summer window, but the Spaniard is still only 22 and will take time to adjust to the Premier League.

Dominic Calvert-Lewin is another option. The star of England's FIFA Under-20 World Cup triumph was excellent in Everton's draw against Manchester City at the Etihad in August. But, at 20, he is perhaps too young to be relied upon, and it is as yet unknown whether he will develop into a clinical finisher at the highest level.

The last point there is salient because, not only do Everton miss Lukaku's pace, movement and physical presence in attack, they also miss his deadly finishing.

The Toffees have only scored two goals in the Premier League so far this season, and rank 19th in the division for shot conversion. Their measly average of finding the net with just 7.1 per cent of their attempts at goal is better only than Crystal Palace, who have not yet scored.

Meanwhile, over at Old Trafford, Lukaku has already netted five times in his first five games for United, maintaining a personal conversion rate of 20 per cent. Even that is a reduction on the 22.73 per cent he managed at Goodison park last term.

The transfer window has closed, so Koeman's only option to arrest the slide is to inject some pace into his line-up, either by utilising young Ademola Lookman more in the wide positions, or putting more faith in Sandro or Calvert-Lewin centrally.

With Sigurðsson, Rooney, Davy Klaassen and even the injured Ross Barklay, Everton have an abundance of players able to play in the No.10 role. All of whom are fine creators, but all lack a touch of pace and dynamism.

There is a dearth of suitable No.9s on the blue half of Merseyside, however, and it's costing Everton.