If this match is half as exciting as the previous match up then neutrals are in for a treat. The big question though is will it be? Find out with our Atletico Nacional vs Nacional match preview with free tips, predictions and odds mentioned along the way.

If the recent meeting between Atletico Nacional and Nacional combined with their wider form might mean that a match result prediction is a tough one to gauge. Goals, however, should be guaranteed. Atletico Nacional have conceded in four of their last five home games whilst scoring in the same number whilst the away form of Nacional is exactly the same; they've scored in four, conceded in four and kept zero clean sheets. The sides have played one another five times in the past too with both teams scoring in all but one face-off.

Ordinarily, we use 2.5 as our over/under benchmark. It just didn't feel like an ambitious enough prediction for this match. For starters, last time Atletico Nacional and Nacional played one another they shared eight goals. It's more than that though; in three matches in the Copa Libertadores, Atletico Nacional have seen 12 goals – six for and six against – which is an average over 3.5. Nacional can actually go better than that with a combined 14 goals in their matches; that's an average of 4.7.

They say there is no substitute for experience and if 36-year-old Gonzalo Bergessio is anything to go by then it would be hard to disagree. The Nacional striker scored 27 goals in all competitions last season and now he has four goals in as many games this season. Part of that impressive strike rate is because of his display against Atletico Nacional in the 4-4 draw mentioned earlier. The Atletico Nacional defence will be having nightmares the night before the game. After all, Bergessio did grab a hat-trick. Who is to say he won't manage to grab at least one this time?

Atletico Nacional vs Nacional: Stats and other info

A draw is no good for anyone

Taking a point from this game wouldn't be the worst thing in the world for Atletico Nacional – although a draw is hardly a great result either. For Nacional it would be the case of another game gone and another step closer to finishing bottom of the group. It's unlikely to be a bore draw though and when goals go flying in, anything can happen. If either team was to snatch a win then their chance of progressing to the next stage will have shot up considerably.

FAQ for Atletico Nacional vs Nacional 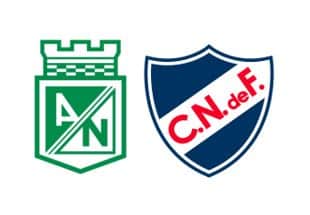