An interesting matchup in the upcoming round of Copa del Rey is the Atletico Baleares vs Celta Vigo duel. With that in mind, here's our preview of the game, along with some free betting tips.

If you are not sure what is the right bet for the Atletico Baleares vs Celta Vigo duel, check out top betting tips for this match:

It's obvious that Celta Vigo is the favourite in this game – they play in La Liga, while Atletico Baleares plays in Primera RFEF, which is the third rank of Spanish football.

More importantly, Celta Vigo is in good form at the moment and they enter this match after beating Real Betis in Sevilla. We expect Celta to take this challenge seriously after Getafe failed to do so and win this game to progress to the next round.

In fact, we can even see them scoring three, so you can also try that if you want to take a punt at higher odds. In any case, Celta Vigo scored at least two goals in three straight matches, and we expect that trend to continue in this game.

If you want to bet on top Copa del Rey odds, check our list of odds for the Atletico Baleares vs Celta Vigo duel right here:

While the guests are the clear favourites in this match, the home team is good form as well. So, let's take a closer look at both teams:

Although they've lost their last two matches in Primera RFEF, Atletico Baleares is actually in pretty solid form. In the last five matches, they have two wins, one draw, and two losses. Overall, the team is fifth in the standings and should be in fight for promotion this season. Furthermore, Atletico demolished Getafe 5-0 in the previous round of Copa del Rey, so they need to be taken seriously.

When it comes to the potential lineup for Atletico Baleares, we can see them fielding the same team that did so well against Getafe, or at least with minimal changes.

With three wins, two draws, and one loss in the last six games in La Liga, Celta Vigo is finally finding good form and playing up to their standards. Their last match in La Liga was particularly impressive since they've beaten Real Betis away from home in a pretty convincing manner.

Galhardo and Solari are the only two players on Celta's injury list and they will likely miss this game. However, we don't expect to Celta field their best team in this match since its a cup game and their opponent is playing in a third-tier league. 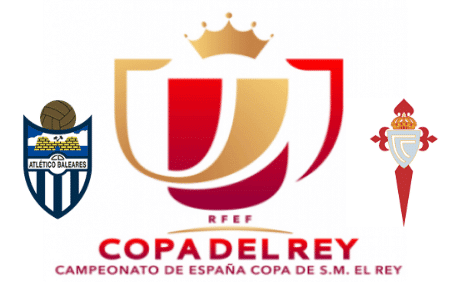