Under 2.5 goals have been scored in three of the last four Basque derbies and we're expecting another tight and tense affair on Wednesday. Under 2.5 goals have also been produced in five of the host's last six outings as well as in each of the visitor's last three fixtures.

Real Sociedad have already beaten Athletic Bilbao 1-0 on two occasions this season, once in their reverse league fixture in December and the other at the weekend when the pair went head-to-head in the Copa del Rey final.

All the stats and odds for Real Sociedad vs Athletic Club

Real Sociedad the favourites to win the Basque derby

Real Sociedad certainly have the psychological edge over their guests on Wednesday having already beaten them twice this season. The hosts will be boosted by their Copa de Rey success at the weekend, where once again Atheltic Bilbao were their victims. This is a derby match so we're fully expecting a close and hard-fought 90-minutes, but everything is pointing towards a home win. Real Sociedad look set to be without the services of Silva, Illarramendi, Moya, and Sangalli due to injury, but they were able to beat Bilbao without the majority of those players in Saturday's Copa del Rey final.

Athletic Bilbao are sick of the sight of their Basque neighbours right now and would probably be wishing to be playing any other La Liga side on Wednesday night. The visitors have been involved in plenty of low-scoring matches of late and we're predicting another one on Wednesday. Athletic Bilbao have lost two of their last four matches, one of which was against Real Sociedad, and it is the home side that head into this game as the form favourites. 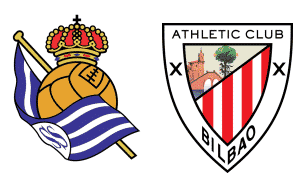