Aston Villa look to get back to winning ways in the Premier League this weekend when they play host to Roy Hodgson's Watford. The Hornets lost their opening game under their new manager but have managed to draw two of their last three games on the road.

We're backing this game to end in a draw as Aston Villa have only managed to win one of their last three home games against Watford and head into the game on the back of a draw and a defeat from their last two league games. Watford have picked up two draws from their last three away games and despite losing against Brighton, the Hornets looked much more organised and will be out to frustrate the home side.

There is a good chance that this game will be low-scoring as both teams have been struggling for wins of late and look out of form. Under 2.5 goals have been produced in three of Aston Villa's and four of Watford's last five matches in all competitions, and we're expecting another tight and tense 90-minutes this weekend.

Aston Villa looking to heap the misery onto struggling Watford

Aston Villa made the trip to Newcastle last time out and failed to impress. Newcastle pressed Villa hard and the visitors couldn't really cope, although, the Magpies only scored via a deflected Trippier free-kick in the 35th-minute. Aston Villa thought they had equalised in the second half when Watkins tucked the ball home from close range only for the goal to be disallowed by VAR due to a narrow offside call. Villa now sit 12th in the Premier League table but could move up two places if they beat Watford and results elsewhere go in their favour.

Watford looked better in Roy Hodgson's first game in charge but the result still went against them. Brighton scored a goal in each half at Vicarage Road to claim a 2-0 win. Dennis looked dangerous for the home side and came the closest to scoring when he rattled the bar following a mazy dribble and shot inside the area. However, Watford still sit second from bottom and even a win this weekend wouldn't be enough to lift them out of the relegation zone.

Aston Villa: Nakamba and Traore have injuries, while Konsa is suspended.

Watford: Nkoulou, Baah and Etebo could all miss the trip to the Midlands through injury. 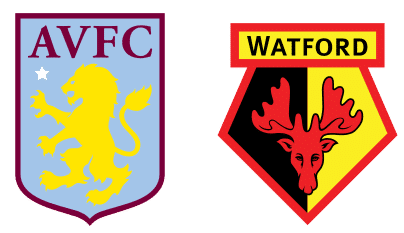