Roberto Di Matteo’s reign as Aston Villa manager was doomed from the very start. During his very first press conference he stated the team would “give our best and try to challenge for promotion next season”. Try to challenge. There is managing expectations and then there is not being confident and not believing what you are actually saying. Di Matteo fell into the latter category. In the very same press conference Aston Villa chief executive Keith Wyness contradicted the newly appointed manager by saying “our priority for next season must be to win promotion”. The Villa CEO’s expectations were transparent. The club wanted to bounce straight back into the Premier League and anything else was simply not acceptable.

It’s no surprise that Roberto Di Matteo lasted just 12 matches. What was supposed to be an expedition to the Premier League quickly turned south. When the Villa board relieved the manager of his duties the club were just the two points above the drop zone and a hefty 10 points away from the play-off places.

Aston Villa owner signed off on over £50 million worth of signings in the summer with strikers Jonathan Kodjia and Ross McCormack signing for a combined £27 million from Championship clubs Bristol City and Fulham as Di Matteo looked to beef up his attack. Defenders James Chester and Tommy Elphick along with midfielder Mile Jedinak arrived for fees totalling £13 million. The revolving door at Villa needed WD40 with the amount of times it was used in the summer with nine players arriving and eleven players departing.

Keep up to date with Aston Villa transfer rumours

After such a high turnover of player it was naturally going to take time for Di Matteo and his new team to find some balance and rhythm. But the manager didn’t help his cause by regularly chopping and changing not just the starting XI but the formation. Villa juggled between a 442, 4231 and a hybrid three/five man defence in just 12 matches. Almost a different formation every third match. There’s being forward thinking and then there’s having absolutely no idea what your best team is. Once again Di Matteo falls into the latter category.

Villa were without an identity and without a style. Villa took the decision to act before a return to the Premier League was out of their reach. They appointed a seasoned veteran in Steve Bruce, a man with four promotions on his CV, to guide them back to the promised land. Despite initial fan unrest at the appointment, what with Bruce being a bit of a cult hero at rivals Birmingham, the Villa board decided the pros outweighed the cons of such an appointment.

The ex-Birmingham boss arrived during the international break and had an immediate impact. Since his arrival at Villa Park, the team is unbeaten with two wins and two draws. For context, Bruce has managed more wins in four matches than Di Matteo achieved in twelve. Some could argue nothing has changed at Villa and this run is nothing more than a new manager bounce but make no mistake about it, Bruce has wasted no time making changes at the sleeping giant.

For starters the Villains now see to have an identity and a style. Aside from Bruce’s first match in charge against Wolves, where Villa played a 442, they have been been using a narrow 433 system with Bruce rotating between Rudy Gestede, Jonathan Kodjia, Albert Adomah and Jordan Ayew as his three man attack. Whichever two play as the wide attackers often drift infield with the full-backs, usually Alan Hutton and Jordan Amavi, being the ones to offer the width. When defending Villa transition to a 451 system. 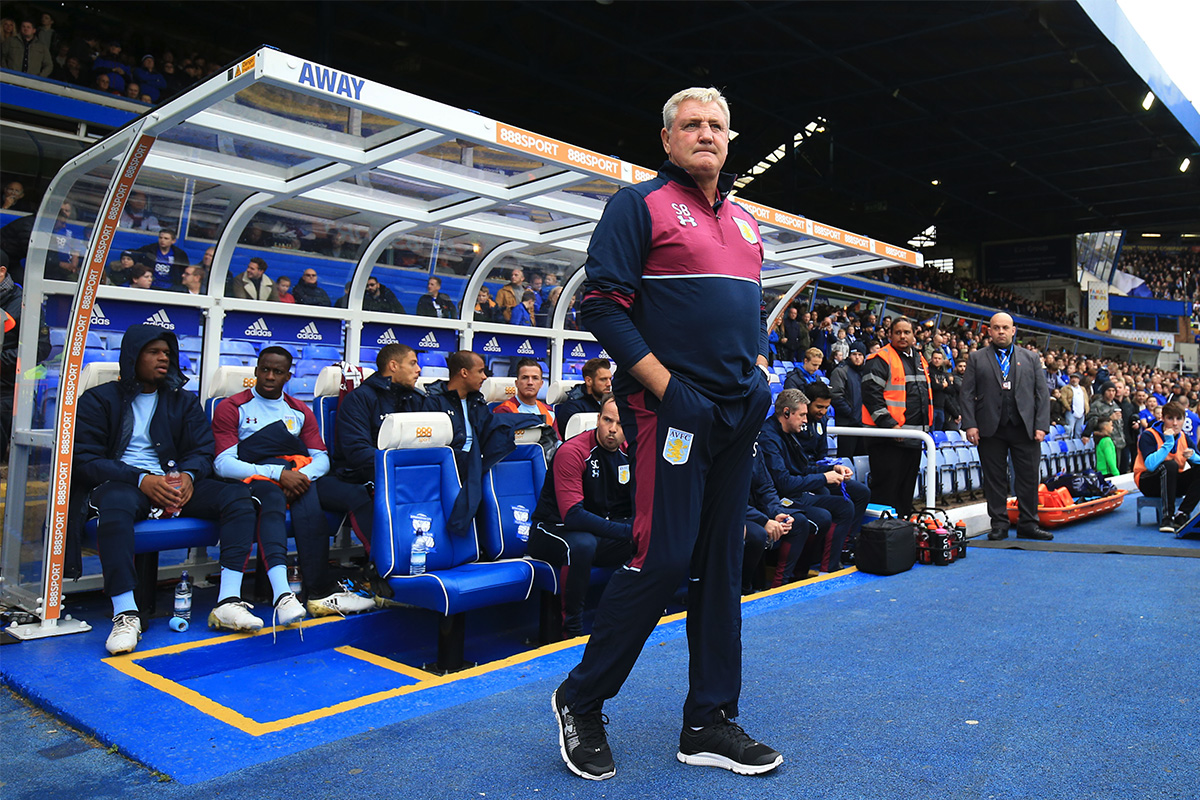 Villa now seem to be more resilient under Bruce too. Granted it’s a small sample size, under Bruce Villa are conceding just the 0.75 games per game as opposed to the 1.25 the club were conceding under Di Matteo. Had Villa carried on conceding at that rate under the Italian they would have conceded 58 goals over the 46 games Championship season. Last season the most a team in the top 6 conceded was 45. If Bruce is able to maintain this current rate then Villa will finish the season having conceded around the 41 mark putting them well within contention for a play-off spot.

Another change for Villa since the arrival of Bruce is just how much they see of the ball. Under Di Matteo they averaged 50% possession but in Bruce’s four matches so far it’s down to 39% and in only one of the matches, against Wolves, did Villa have more than 50% possession. As you’d expect with less possession Villa now attempt fewer passes per match. Under Di Matteo Villa attempted, on average, 401 passes per match with the opposition attempting 406. In Bruce’s four matches they have averaged just 313 passes per match with the opposition attempting 535 passes.

Instead of trying to dominate possession and dominate the ball it appears Bruce is willing to sacrifice possession and trust his team to be resilient enough to withstand the opposition having most of the ball and bide their time before hitting them on the counter attack and utilising the abundance of pace they have at their disposal.

The fact Bruce has been there and done it seems to give the players confidence. He’s breathed new life into players who looked as though they were just going through the motions under Di Matteo. After the 1-1 draw with Birmingham City, Villa goalscorer Gary Gardner had this to say –

“Every player knows what they're doing now. We feel confident. The gaffer's been there and done it – four promotions, and hopefully he can get another one with us. We've worked very hard and it's showing. It feels like we can't lose. I know it's funny to say that but it's a good feeling to have. Going into games knowing you've got a better chance of winning than losing is good.”

After an impressive run of form Villa are now just the six points off of the play-off positions meaning Bruce has made up four points in just four matches. With Bruce at the helm you shouldn’t bet against Villa being in the promotion mix come the end of the season.

Newcastle United have made another transfer signing and are on the cusps of possibly doing more work in the market. Steve Bruce will hope his team...

Live streaming is one of the most popular sports betting features nowadays, and many punters look to try out platforms that offer it. In our...