The Championship play-off final pits Aston Villa against Derby County. A place in the Premier League awaits the winner of Monday's clash but unlike previous years, the form book suggests there should only be one winner.

Dean Smith's men are the team to beat having lost just once in their last 15 matches. And that defeat came at the hands of eventual champions Norwich City.

During that period, Villa went on a ten-match winning streak to confirm their place in the play-offs, finishing fifth in the Championship.

Spearheaded by forward Tammy Abraham, on loan from Chelsea, the Villans scored 13 more goals than their opponents on Monday. They won both matches in the normal season, too, with a 7-0 aggregate scoreline.

But in knockout football, form counts for very little. In fact, the two teams are much closer than it first appears. 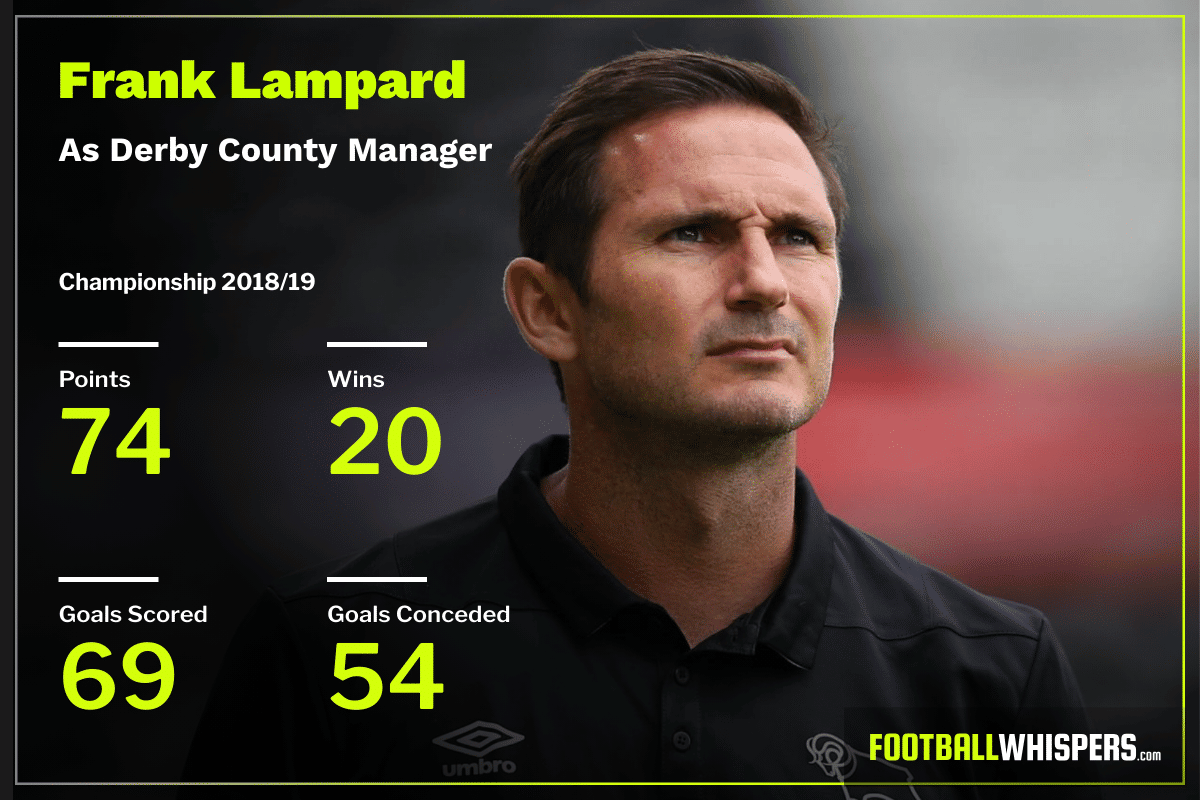 While their form could best be described as patchy heading into the final, having won just six of their previous 15 but only losing on two occasions during that run, the Rams are something of a wildcard.

They needed a final day victory over third-placed West Bromwich Albion to pip Middlesbrough to the final play-off spot. They lost the first leg of their tie against favourites Leeds United at Pride Park only to then defy the odds to win 4-2 at Elland Road. It was only the second time all season that Marcelo Bielsa's men had conceded more than three goals in a single game.

Aston Villa's semi-final was just as exciting. A 2-1 win at Villa Park was followed up by a 1-0 loss at The Hawthorns. The match went to penalties and the away side won 4-3 in the shootout.

Abraham fired home the winner but it was Conor Hourihane who got Smith's team off to a good start. The Republic of Ireland international was once again one of the key men this season, netting nine goals in all competitions to make it 20 over two seasons for the 28-year-old. 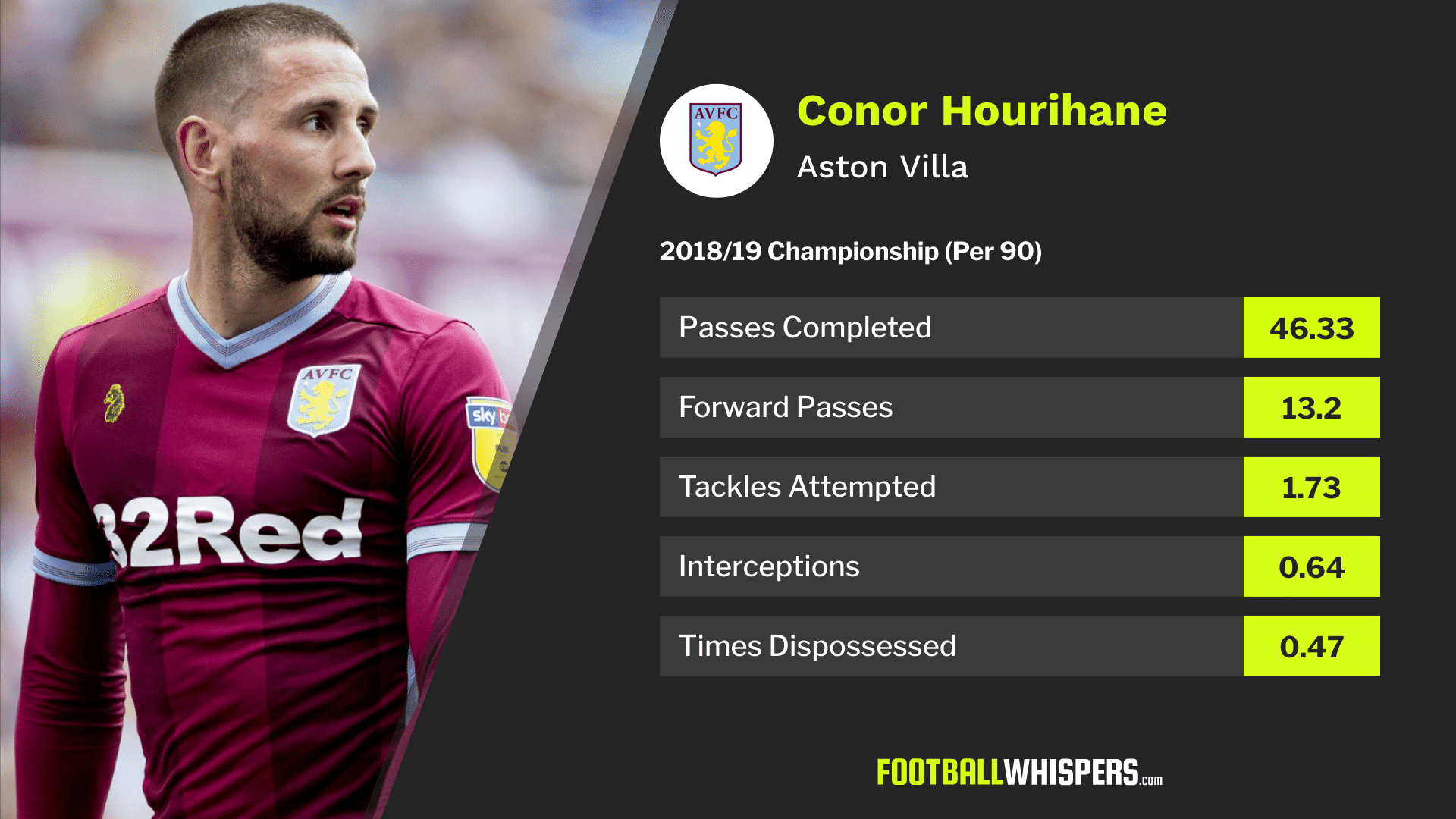 Paired with John McGinn, Hourihane is part of a formidable midfield for Villa. McGinn does the dirty work and this allows the former Barnsley man to pull the strings.

The Villa No.14 is the hub. He makes the most passes, creates the most chances and, inevitably, has the most touches. All eyes will no doubt be on Abraham and Jack Grealish, but it's Hourihane who could dictate how the final goes.

While Villa have a sustainable style, Derby are unpredictable. Whereas the midfielders see a lot of the ball for Smith's side, centre-back Richard Keogh averages the most passes and touches for Lampard's side.

Mason Mount has created the most chances but he's not as involved perhaps many would assume. He's enjoying himself on loan from Chelsea but, alongside Wilson, he tends to get involved in the final third more than he does anywhere else. The ball is played around in the defence before the midfield area is bypassed.

It means two styles will clash on Sunday. Both like to play possession football, averaging 53 per cent each this season, but both play it in different areas.

The teams can play their own game at Wembley without having to tweak much. The outcome will hinge on whether the reliable goalscorer can outperform the unsustainable one.

It could well be Abraham vs Wilson. 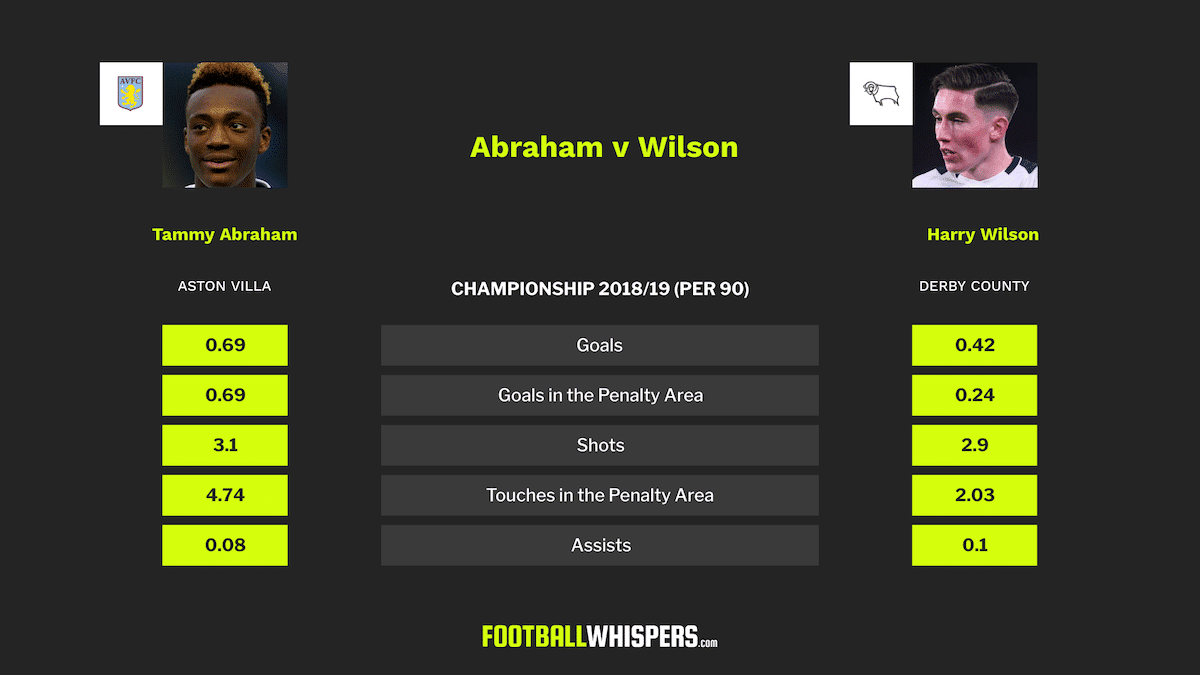 Both youngsters have enjoyed their loan spells this season. Abraham's return of 25 goals in the Championship can only be bettered by Teemu Pukki while his goals per 90 record is second only to Dwight Gayle.

He was involved in five goals in the final five matches of the season and then he netted against West Brom in the semi-final.

Everything about Abraham screams reliable and sustainable. Villa can count on him to deliver if the opportunities come his way.

But just like Derby themselves, Wilson is a wildcard. The club's top scorer in the Championship with 15 this season, the Liverpool owned wide forward isn't a poacher. Almost half of his goals have arrived outside the penalty area and he's not a constant threat throughout, as highlighted by his touches in the penalty area.

But he has that something special about him. And he is a big game player. With Derby needing points, Wilson assisted the goal in the 1-1 draw with Swansea City, he notched both in the 2-0 win over QPR, scored in the final game of the season against WBA and then scored and assisted in the 4-2 semi-final win over Leeds United.

Big moments. Big goals. And this despite having stats which suggest there isn't much reliable about the way he plays. The biggest moment of his career is on Sunday, what will he produce with the eyes of the world watching?

Aston Villa vs Derby County is one of the most intriguing play-off finals in a long time.