Since David Gold and David Sullivan took over at West Ham United in 2010, it is fair to say signing a decent striker has not been something the duo have been particularly good at.

More than £50million has been spent signing 31 players to play that role, but 15 of them failed to get even a single goal during their time in East London.

A mixture of free transfers, temporary loan additions and expensive signings over a seven-year period, as well as injury problems, has stopped the Hammers from possessing a consistent, clinical, goal scoring striker.

So it is no surprise to see them once again linked with a number of strikers this summer.

We assess four of those linked with a move to the London Stadium.

The Manchester City striker has been linked to West Ham by The Sun.

After his breakthrough season in 2015/16 under Manuel Pellegrini, where he scored 14 goals in 35 appearances in all competitions, Kelechi Iheanacho found his time on the pitch severely limited this season.

Since Pep Guardiola arrived at the Etihad Stadium this campaign, he has played just 899 minutes, scoring seven times in 29 games.

But perhaps crucially he was not even in the squad for ten of the final 17 games of the season.

For a 20-year-old at a crucial stage at his career, he needs to play, and at the moment he won’t get that at City with Gabriel Jesus and Sergio Agüero ahead of him in the pecking order.

The Nigerian has suggested he isn’t aware of talk surrounding his future and wants to stay at his current club.

“I’m happy to stay at Manchester City and keep fighting to help them achieve what they want to achieve.”

He’s a very good finisher and if he got more chances in a Premier League side, you would expect him to put them away – he had a shot accuracy of 64 per cent in the Premier League last season.

But for someone who isn’t short at 6ft 1ins, he is disappointing in the air, winning just 13.79 per cent of his aerial duels.

Given his promise, you would be surprised if Iheanacho left the Etihad permanently, but a loan move may be on the cards. 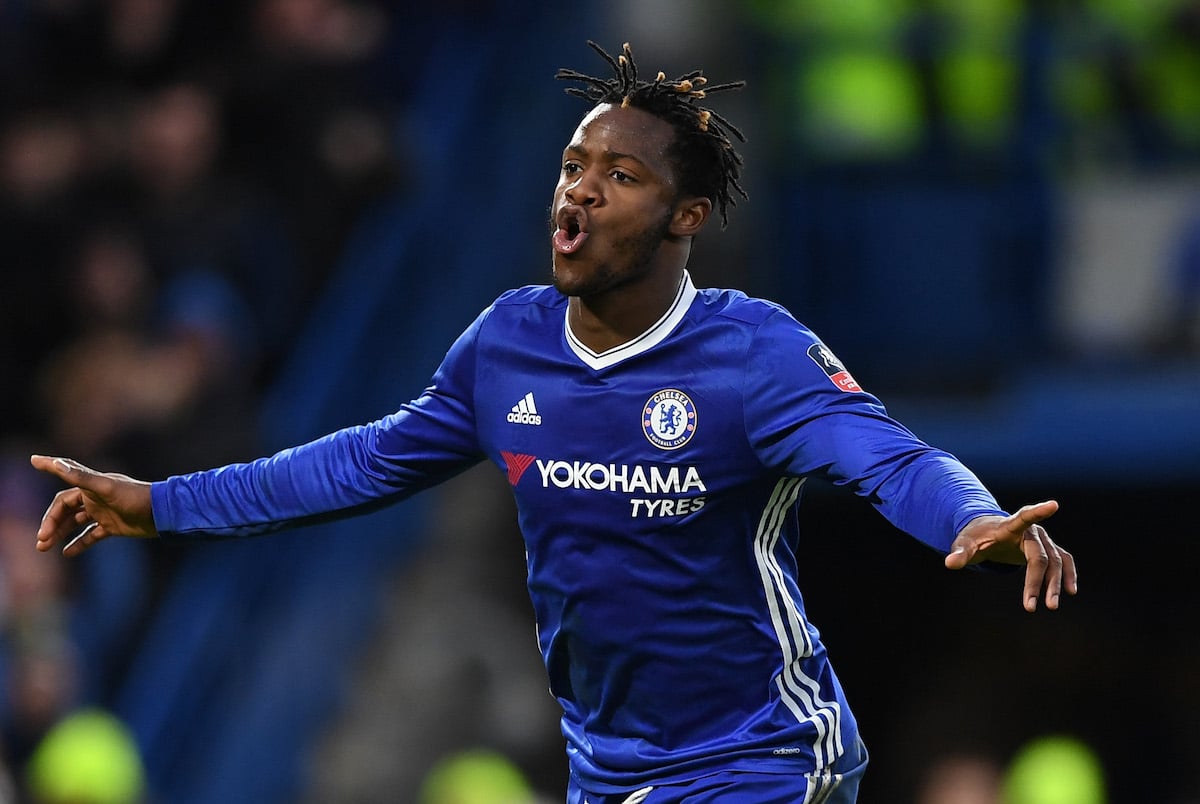 It looked like Michy Batshuayi was going to be a £33million write-off at Chelsea.

He hadn’t even started a Premier League game and was behind Diego Costa in the pecking order.

And then he stepped up against West Bromwich Albion to score the title-winning goal – albeit from the bench.

Speaking on Sky Sports after that game, Thierry Henry, who has coached him as part of the Belgium set-up, said: “That is typical Michy. He’s all instinct.

“When we work in front of the goal he’s one of the best, especially with his left foot. He showed that tonight. That goal will go down in history.”

He actually finished the league season with four goals in three games, including a great strike where he cut on to his left foot and fired low into the corner against Sunderland with just seconds left during the last game of the season.

The 23-year-old even started a Premier League game too.

The Hammers were linked with the Belgian when he was at Marseille last year, but he could make the move to the London Stadium this summer.

ESPN are reporting that Chelsea are willing to let him go on loan to West Ham next season.

And like Iheanacho, if he is in a team where he is playing regularly, you’d expect him to score.

Because of his limited time on the pitch this season – one start and 19 substitute appearances in 299 minutes in the league – his goal record looks great, working out at 1.51 goals scored every 90 minutes.

Not many can beat that!

It appeared Conte bought him to be part of a front two that never ended up materialising at Chelsea, perhaps that could suit him should he make the move to West Ham.

Alongside Andy Carroll or even Iheanacho, Batshuayi could look very good indeed.

The 29-year-old got 11 goals in 31 appearances since his arrival from SV Darmstadt 98 in the summer.

He’s a tall striker, at 6ft 4ins and has been hugely impressive this season as he helped his club finish fourth in the Bundesliga.

His good form has even earned him his first call up to the Germany national squad for the Confederations Cup, which starts in mid-June.

But with Hoffenheim qualifying for the Champions League next season, a move to West Ham would be a shock, especially considering the Hammers aren’t even in the Europa League.

And in regards to a move, he appears to have shut it down, saying: “This topic is annoying, I've already said everything.”

Whether West Ham need another tall striker who could be an aerial threat given they have Carroll is also questionable, especially given the Englishman is more impressive in the air.

He won 62.72 per cent of his aerial duels, whereas Wagner has won just 49.72 of his in the league season just gone.

Watford forward Isaac Success has also been linked to the Hammers in recent days.

One of his representatives, Douglas Idahosa told AllNigeriaSoccer: “It is true that West Ham are interested in signing Isaac Success.

“If he is not promised first team opportunities he will move before the window closes.”

The agency reportedly in talks with West Ham chiefs on behalf of Success also handles the affairs of Hammers players Antonio and Aaron Cresswell, so a move could be smoothed over by that.

Like Iheanacho and Batshuayi, the 21-year-old Nigeria international has struggled for game time this season, playing just 531 minutes in the Premier League since his arrival from Granada for £12.5million.

He has only started twice in his 19 league outings, but has played on the wing rather than always being an out-and-out striker.

What Walter Mazzarri’s replacement has planned for him will obviously play a big role in his future, but whether West Ham fans would be happy with someone who found it difficult to get in a struggling Watford team is another question. 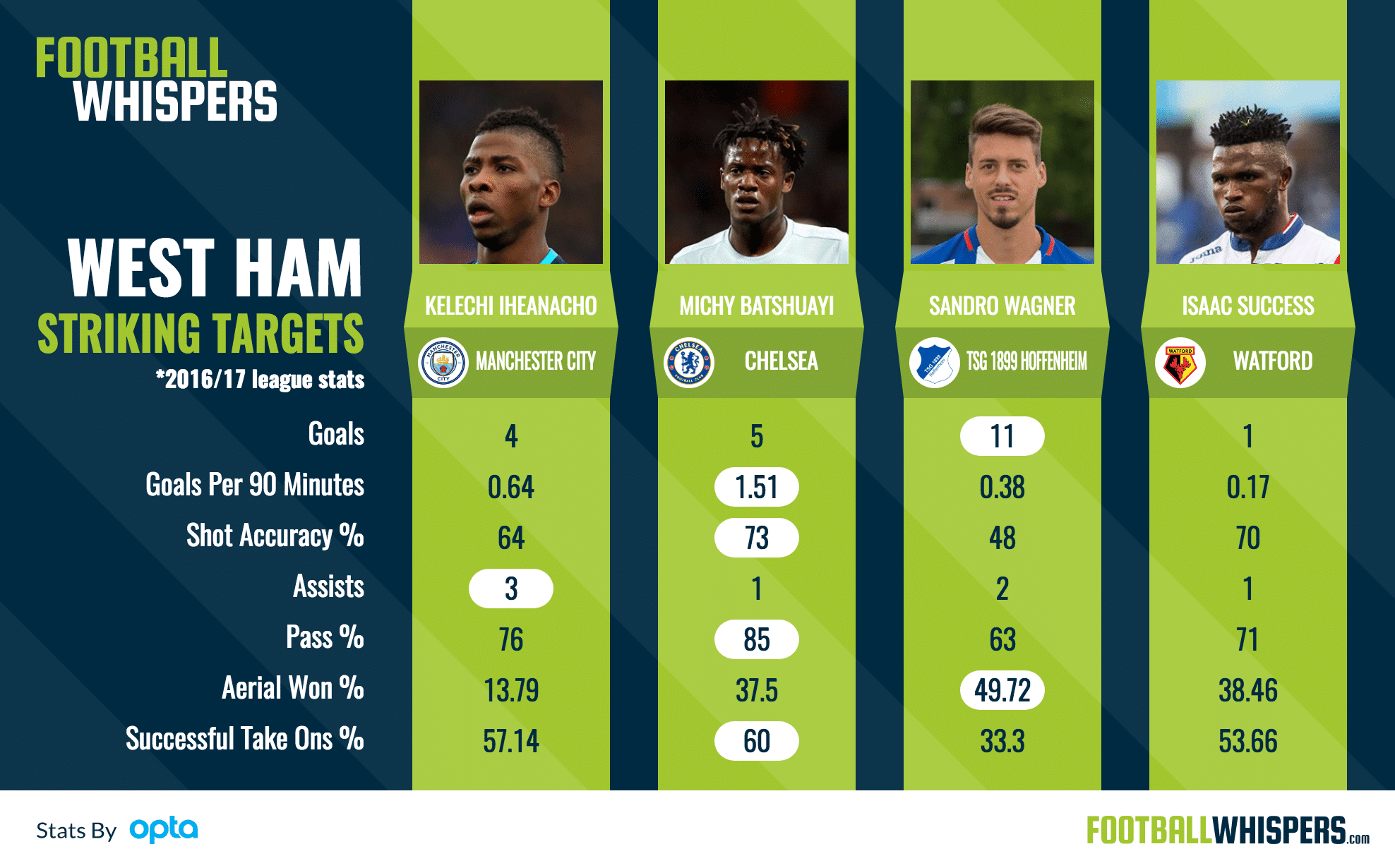 Yet, while he was in Spain he looked promising. He was a good dribbler – in fact he completed 53.66 per cent of his attempted take ons in the 2016/17 season – but he is yet to prove himself in England.

Whoever West Ham bring in, surely fans will hope it isn’t like last summer when they were linked with the likes of Zlatan Ibrahimović but ended up bringing in an underwhelming Simone Zaza.