There was a time when Ashley Barnes was being touted for a call-up by Austria. Now there is a legitimate case to answer over whether an England cap should be out of the question.

Despite being born in Bath – and having the West Country twang to prove it – the 29-year-old has represented Austria, the country of his paternal grandmother's birth, at under-20 level.

His hopes of a senior call-up were dashed in February 2019, though, when the Austrian Ministry of the Interior rejected his application for citizenship.

It's easy to look down on Burnley and plenty do. Sean Dyche's agricultural brand of football means they are not the neutrals favourites and they do not have any particularly sexy names to speak of.

The fact Tom Heaton, Nick Pope, Jack Cork and James Tarkowski have won England caps while playing for the Lancastrian outfit is remarkable and a testament to the job Dyche has done at Turf Moor.

“He has a very, very strict recruitment policy,” former Burnley keeper Paul Robinson said while appearing as a pundit on Bein Sport in 2017. “There’s a certain type of player he wants. He’s got a style that he wants to play, and a certain player that fits the mould.”

He became Dyche's first cash signing when he joined from Brighton & Hove Albion for £450,000 in January 2014 to aid Burnley's promotion push. He did so by scoring three times in 21 appearances for the Clarets.

But Dyche had not signed the strapping striker for his goals; it was about what he could bring out of and do for his team-mates – much as it had been in Sussex where he only broke double figures in two seasons.

At 6ft 1in Barnes isn't a giant. But he makes the best possible use of his barrel-chested physique, leaning into, holding off and out-muscling defenders for fun.

In his first three seasons he scored just 11 league goals for the Clarets but – injury in 2015/16 aside – remained a regular as Burnley returned to the Premier League after a single campaign away.

Gradually, Barnes has introduced more goals to his game. He netted nine in 36 – or one in four – in 2017/18 and topped that last season with 12 in 37. In fact, over the last three seasons, he has the 13th-highest expected goals score of any Premier League forward – 26.41. Better still, he's exceeded it with 27 goals.

“He has worked very very hard to bring success to himself, he is an awkward customer and has learnt the game,” Dyche said ahead of Saturday's trip to Arsenal. “We want him to continue pushing himself and help the team.”

On Saturday he got his 2019/20 campaign up-and-running with a brace as Burnley swatted Southampton aside 3-0 at Turf Moor.

That double means Barnes is up to 11 Premier League goals in 2019: the same as Raheem Sterling, Mohamed Salah and Pierre-Emerick Aubameyang.

Yet as his double proved, Barnes is about more than his physical assets – he is an intelligent centre-forward too. 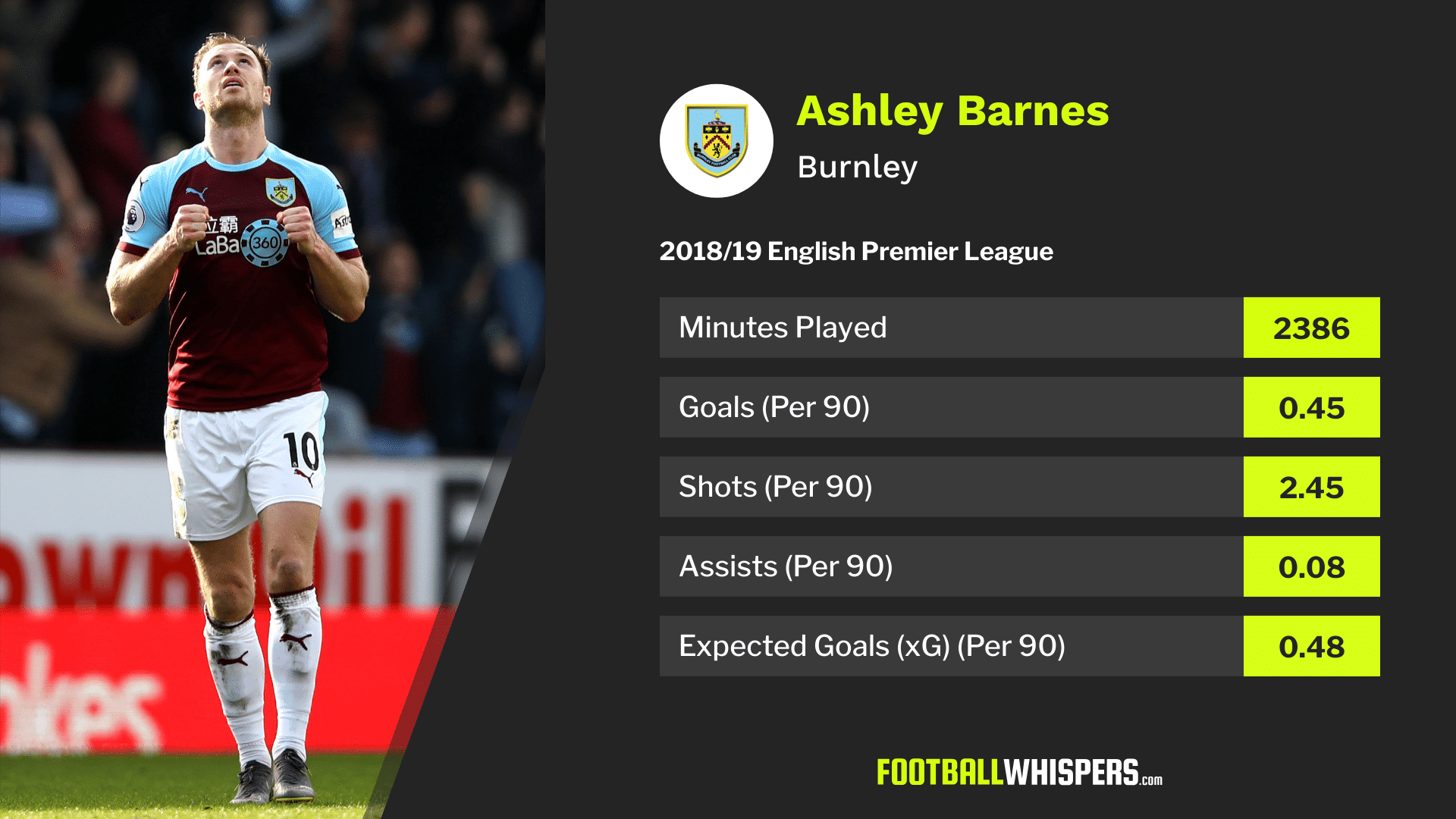 His first against the Saints owed plenty to luck. Left-back Erik Pieters hooked a clearance forward from halfway and when Jannik Vestergaard got caught underneath the ball, toppling comically, Barnes nipped in to lash home.

His second, though, was all about timing, lurking patiently before nipping round the back of Vestergaard before side-footing the ball past the helpless Angus Gunn.

Speaking after the game, Dyche said: “I've got great admiration for him. This pre-season he stuck at it but hasn't got a goal. He looked hungry for it.

“His second finish is sublime. It's a brilliant ball in from Erik Pieters but it's a great finish. When they finish like that, centre-forwards, it looks easy. It's not easy when it's coming over your shoulder like that.”

That ability to escape the attentions of defenders does not come by accident. It is a craft Barnes has been honing over the years and it was evident last season – he scored at the Emirates Stadium, Stamford Bridge and Old Trafford, as well as netting at home to Tottenham Hotspur.

Attention is finding Barnes in other ways, though. Burnley fan Bacchus recorded a grime track in the forward's honour.

And while you won't find the tune on Dyche's iPod, it's about time someone made a song and dance about the forward.