There is next to nothing between these sides in the table right now. Who will win as they face off on Sunday? Find out with our Ashanti Gold vs Accra Lions match preview with free tips, predictions and odds mentioned along the way.

Hosts to take the win

Ashanti Gold have enjoyed some good form recently, they lost just once in their last six games, with four wins and a draw. It's worth noting that Ashanti Gold's last four losses came on the road; they've been pretty solid at home, having won all of their last four home games. On the other hand, Accra Lions have mostly struggled away from home this season; they've played 15 road games so far, and lost 10 of them, with just three wins and two draws. All things considered, we're making the prediction that Ashanti Gold will take all three points from this match.

Goals will be hard to come by

Accra Lions have been the lowest scoring team in the Premier League this season; they've scored just 20 goals in 30 league games so far. As a matter of fact, Accra Lions blanked in three of their last five games; they managed just two goals in that five game stretch. It's also fair to point out that Accra Lions have been solid defensively in recent weeks; they did not concede a single goal in their last three games, and they've kept five clean sheets in their last seven games. Because of this, Accra Lions' games tend to be really low-scoring games; 11 of their last 13 games went below the 2.5 goal mark, with nine of those games going under 1.5. On that note we don't think there will be up to two goals scored in this match.

A midtable clash that could go either way

There is just the one point between these sides in the middle of the Ghanaian Premier League standings. That said, Ashanti Gold have a game in hand meaning a win could see them put some real distance between themselves and Accra Lions. The flip side of that is that Accra Lions could close things up with a win themselves.

Ashanti Gold bounced back from a 2:0 loss to Medeama by beating Elmina Sharks last weekend; they now have four wins in their last six games, with a draw and a loss. Ashanti Gold will welcome Accra Lions to the Len Clay Stadium on Sunday; they'll be eyeing their fifth win in seven games.

Accra Lions have had a fairly decent run of form the past couple of weeks; they are unbeaten in their last three games, with two wins and a draw. Accra Lions are 10th on the Premier League table, just ahead of their opponents Ashanti Gold; they'll look to put some more distance between the two teams with a win today.

A quickfire FAQ on Ashanti Gold vs Accra Lions 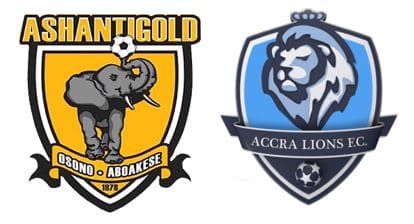