There's something about Arturo Vidal which is at odds with Barcelona.

The Chilean might just be the least Barcelona Barcelona player ever, in fact. He hurtles around the pitch like a Labyrinth pinball, covering every blade of grass, clattering into tackles and involving himself in everything.

Then there's his appearance. The spiky mohawk, the tattoos covering his arms, neck, chest and, well, entire upper body. None of it is in keeping with the team's choirboy look. Frenkie de Jong, all floppy blonde hair and blue eyes, is the archetypal Barça player – stylistically and aesthetically.

Yet Barcelona need a Vidal and he proved his worth yet again by coming off the bench to snatch victory from the jaws of defeat against Internazionale in their Champions League group fixture on Tuesday.

For 53 minutes Inter's plan had worked perfectly. They were deep, compact and organised, soaking up the pressure and springing into life on the counter. Though it was too early to take the lead when Lautaro Martínez slotted home in the third minute.

Still, for almost an hour, Barcelona huffed and puffed but failed to blow Inter's house down. Pass, pass, pass. Nothing was getting through and something had to change. So instead of turning to Ousmane Dembélé, Ernesto Valverde's first switch was to introduce Vidal for Sergio Busquets, his very antithesis.

Barça did not need the Spaniard. They had control of the game and the ball by virtue of the fact Inter didn't want it. Squint and you might have been fooled it was José Mourinho in the visitors' dugout, reprising his role as party pooper nine years earlier.

Vidal changed all that. Immediately he gave Barcelona's midfield the verticality and zest it had lacked. Possession football is all very well and good but it needs to build to something and the Chilean gave De Jong and Arthur another focal point, someone to link midfield and attack with Antoine Griezmann still struggling to find his role in this side.

Within moments Vidal had unsettled Inter in the box, spun and got a shot off. It was blocked, but it set the cat among the pigeons. Just five minutes after his introduction, Barça levelled and it was the 32-year-old who turned provider, clipping a perfect cross into Luis Suárez to volley beyond Samir Handanović.

It was Lionel Messi who set up the Uruguayan's winner with a slide-rule pass and afterwards the Blaugrana skipper paid tribute to Vidal.

Midfield peer Arthur weighed in, too. “Every player has his own strengths but it's clear that Arturo helped us pressure further up the pitch,” he said. “It's what the team needed.”

It's no secret Vidal is a good player. You don't play for the dominant club in Italy (Juventus), Germany (Bayern Munich) and Spain over the last decade without being of a certain level. It's more the fact his rambunctious style of play is at odds with the calm, control and measure Barcelona are famed for. 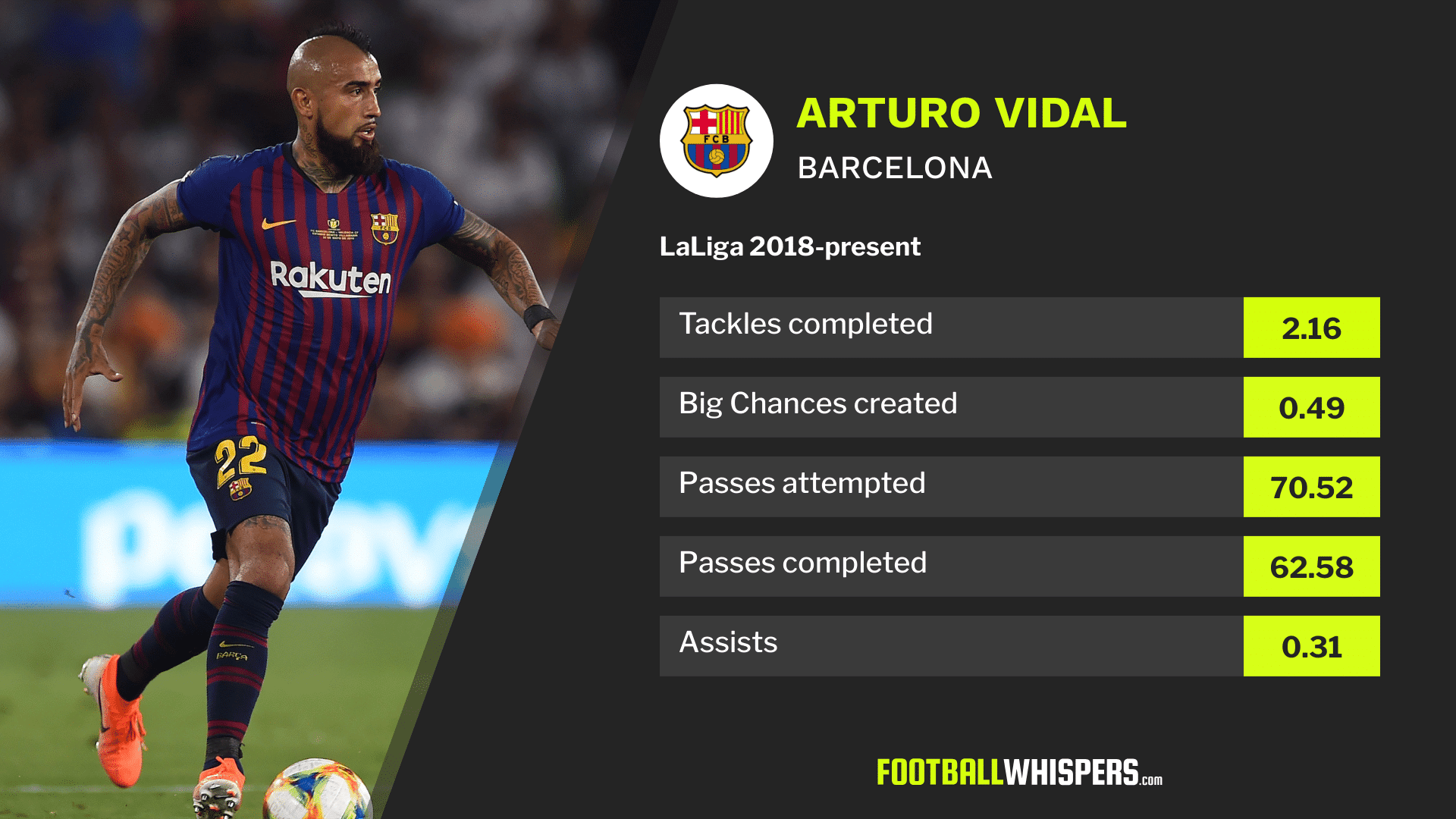 But that is the point. The Catalans have evolved. That was evident two summers ago when they recruited Paulinho from Guangzhou Evergrande. Like Vidal, the Brazilian was signed for his physicality and tenacity. He served his purpose to a tee – despite unkindly being labelled the worst signing in Barcelona's history – before returning to China after a single season.

But like Paulinho before him, the spiky-haired midfielder has proven any doubters wrong. Since arriving in Catalonia in the summer of 2018 he ranks third in LaLiga for attempted tackles (3.65 per 90) and fourth for successful tackles (2.16). But there's much more to Vidal's game than simply being an enforcer. He possesses real quality when in possession too. He is fifth among LaLiga midfielders for Big Chances created (0.49) and assists (0.31).

Even Pep Guardiola is a fan, saying “If I go to war, I want Vidal alongside me” while in charge at Bayern.

Yet his Barça career might have been over before it had even begun. When Arthur was preferred for last season's Champions League clash against Tottenham Hotspur at Wembley in October, Vidal took to Instagram – as is the modern way – to express his disappointment.

Barcelona coach Valverde attempted to play it down, saying “Maybe he had an accident at home. He didn't tell me he was angry” before making the midfielder warm-up continually against Valencia without bringing him on. Vidal piped up again, posting a message which read: “Don't fight with Judades; they hang themselves.”

But both men swallowed their pride and Vidal finished the season with 1,928 LaLiga minutes to his name, playing in all but five of Barça's fixtures. By no means an ever-present, but more minutes than in either of his last two seasons at Bayern.

But Vidal has never lacked for ambition. Upon arriving at Barcelona he stated his expectation he'd be a starter and an aim of winning the Champions League which had proven elusive up to that point.

On Tuesday's evidence, Barça need Vidal to achieve that as much as he needs them.