After helping his club Gremio win the Copa Libertadores, Arthur’s post-game celebrations were rather unusual. The midfielder was pictured posing with Barcelona representative Andre Curry, wearing the famous Blaugrana shirt.

It caused a bit of a storm and the Brazilian club felt they were forced to contact FIFA about the alleged tapping up.

“Arthur is of great character, in relation to the mounted mess, he is not at fault,” said Nestor Hain, the club’s director.

“I was informed that Barça wanted to eat with him and his family. Gremio cannot prevent it, but Barça gets into a problem with Gremio involving the kid.

“We are writing a communication to FIFA for manipulation after confirming the way in which they acted.”

Now, according to the the Daily Mail, Chelsea and Manchester United are looking at the midfielder while a Barça move stutters.

“On the Barcelona matter, they did speak with me,” admitted Arthur. “We had a meeting, but I want to say that there’s nothing final.

It’s believed the Spanish giants would be forced to trigger the player’s £44million release clause if they want to sign him, but contracted until 2019, there could be a deal to be done by another side, especially considering Barça have just splashed out lots of money on Philippe Coutinho.

Born in Goiânia, he has progressed through the Grêmio youth system and was called up to the first-team in 2015. After spending a few months on the bench, he came off the bench against Botafogo in the final game of the campaign.

Five months later, in the opening day of the new season, Arthur got his first league start against the same side and he hasn’t looked back.

After 40 appearances in the Brazilian Série A and 12 during this year’s equivalent of the South American Champions League, guiding them to the Copa Libertadores final, beating Lanús 3-1 on aggregate.

Mostly played as a defensive midfielder, he is a deep-lying playmaker. Away from the water-carrier type of players like Dunga and Arsenal's Gilberto Silva who used to command that position, Arthur is a throwback to the smaller, more technical midfielder the country used to produce.

There are shades of Marco Verratti in the youngster. A player able to keep possession under high pressure, he has attacking midfielder capabilities and does his best work in spreading the play, keeping his team ticking over and make the pass before the assist.

WHAT ARE ARTHUR’S STRENGTHS?

In 27 appearances this term, Arthur managed to compete 93.1 per cent of his passes, which helps as no one else in the team manages more than his 74.1 average.

In fact, no one in the Brazilian league averages as many passes per game. Petros of Sao Paulo, averaging 63.7, is the closest opposition player.

Many of them come in their own half. Almost everything Gremio create goes through Arthur, but he has the sense and reading of the game to push forward and create in the final third.

Off the ball, the 21-year-old is a willing runner, always chasing back, getting his frame in the way. Although he is only five-foot-seven, he has a very strong upper-body and uses it well.

A beautiful player to watch on the ball, he has excellent vision and almost glides across the pitch.

In the graphics below, you can see Arthur begin another Gremio attack. He makes the simple pass out wide, but follows the play, making room to receive the ball again. 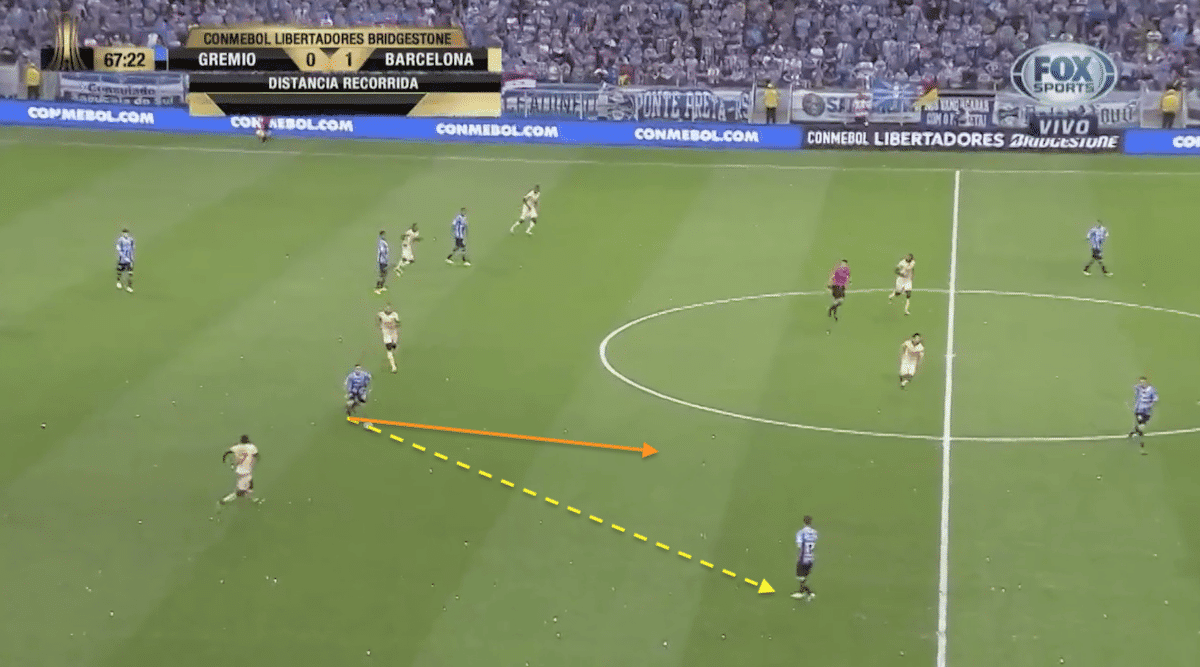 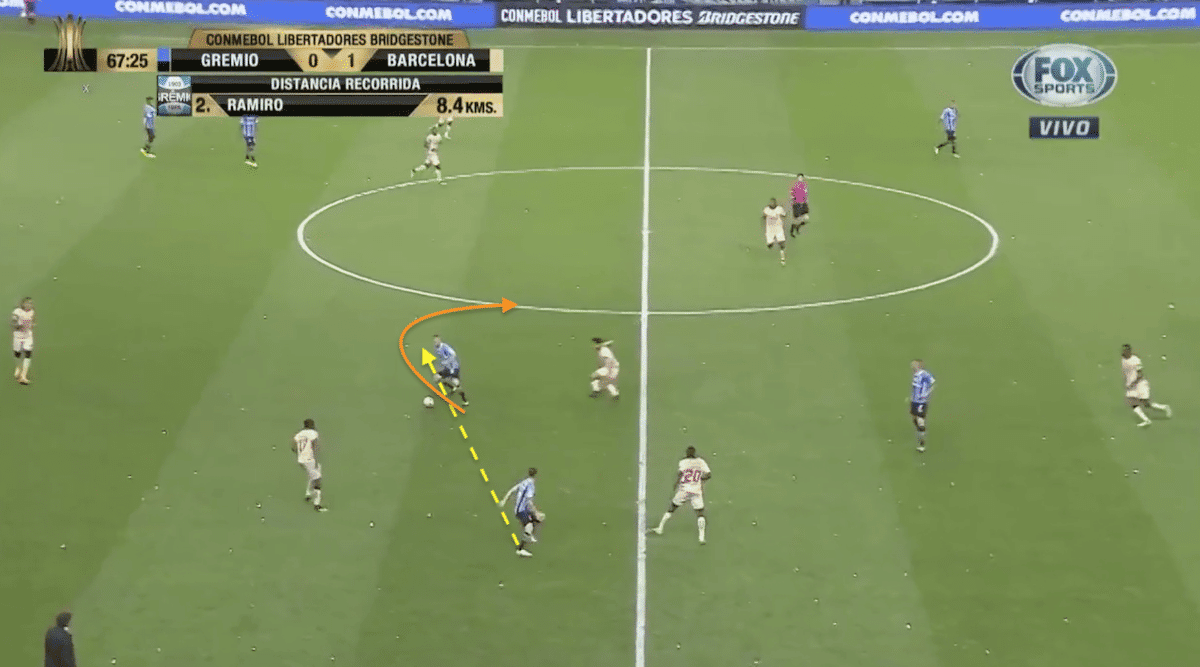 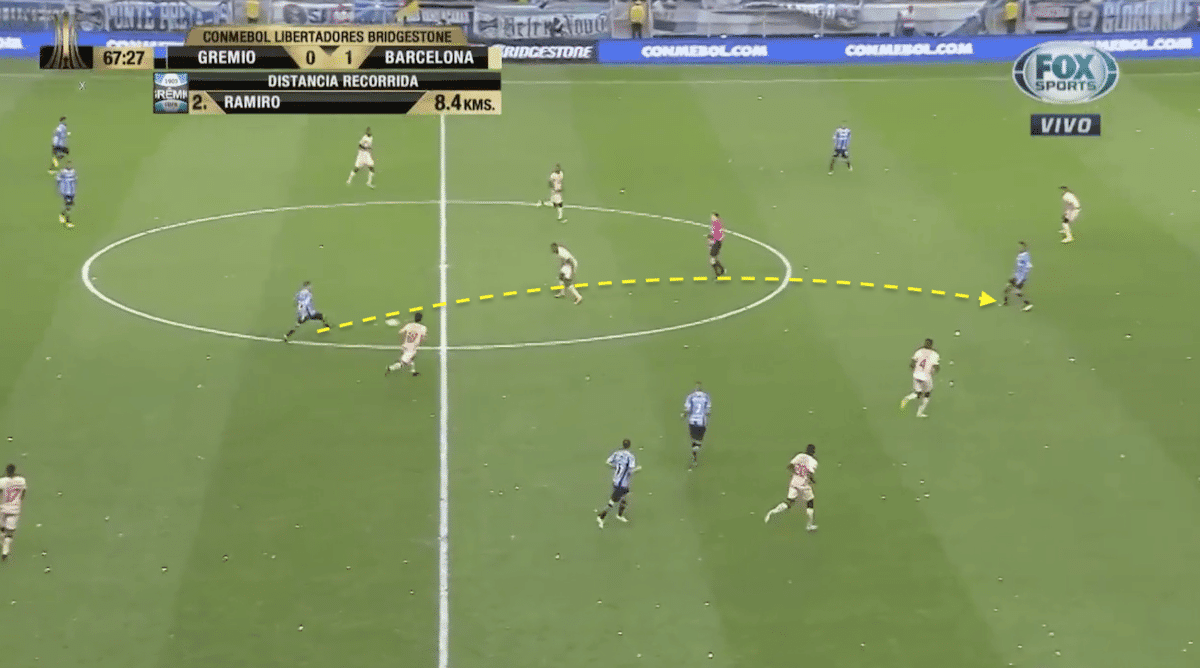 Rather than just take the ball into feet, Arthur opens his body, beats his marker and then plays a great pass up the field, taking out the opposition midfield.

WHAT ARE ARTHUR’S WEAKNESSES?

Rather than being weak in any one area, Arthur would need to show he is able to make the jump to the next level. It’s one thing to impress in Brazil, but without any full international caps, he is still an unknown quantity.

Thiago Maia was a wanted-man before his move from Santos to Lille and the fellow midfielder has struggled to find his feet in northern France.

Everyone believes Arthur has what it takes to make the leap, but until it happens, there’s never any way of truly being certain. “I do not know if, in nine months from now [at the World Cup], he will have a place [in the Brazil squad],” added national boss Tite. “But he is a prospect for the future. I can compare him now to where Gabriel Jesus was.”

For every Maia there is Jesus. The most important factor is choosing the right club.

HOW MUCH IS ARTHUR WORTH?

The Brazilian has a release clause of €50million (£44million), but the understanding would be, with his contract expiring, a deal could be reached at a lower level.

However, with Barcelona’s stunt infuriating Gremio, the Catalan giants would have to trigger the full amount. There’s nothing the Brazilians could do to stop that.

It leaves the door open for others, and if Chelsea do see him as a long-term replacement for Cesc Fabregas, it would make sense to pounce sooner rather than later.

Every club is looking for a special type of midfielder, with poise, composure and the ability to pass the ball anywhere on the pitch. In England, you need players who are strong, intelligent and with great vision. Put him beside a ball-winner like N’Golo Kanté, or even two if you add Tiémoué Bakayoko, and it’s almost the perfect combination.

Doubts will remain over his talent making the jump from Brazil to Europe, but there’s no easy way to find out unless you take a leap of faith.

He would suit Antonio Conte’s style at Chelsea, but you could also envision him taking on Fernandinho’s role at Manchester City, while he'd be great alongside Paul Pogba and Nemanja Matić at Manchester United. Barcelona would be a great fit too and the comparisons to Andrés Iniesta – although playing deeper – tick a lot of boxes at the Nou Camp. It may just be a case of who blinks first.