It's taken ten games, but Sunday's 4-0 demolition of Newcastle United was the perfect illustration of what a Mikel Arteta Arsenal side could look like.

It was just the former midfielder's second Premier League win since being appointed on December 20, but it felt significant.

All of his big four scored – Pierre-Emerick Aubameyang, Alexandre Lacazette, Nicolas Pépé and Mesut Özil – as the Magpies were vanquished. Make no mistake, this wasn't a return to the swashbuckling style of happier days, but it was a step in the right direction.

After the goalless draw at Burnley prior to the international break, a match which left Arteta lamenting the condition of the Turf Moor pitch, this was the result and, more importantly, performance required to kickstart the quiet revolution.

We take a closer look at how Arteta has got Arsenal up-and-running once more.

1. Tighter at the back and more organised

For far too long, Arsenal's lack of organisation and alarmingly porous defence have been their Achilles heel. Sunday's win over Newcastle means they now have a positive goal difference – something which underlines the problem Arteta faced following his appointment.

The 37-year-old does not have the panacea to Arsenal's ills. The 2-2 draw at Stamford Bridge in January was a stark reminder of that. Shkodran Mustafi‘s lapse in concentration forced David Luiz into a decision. The Brazilian's needlessly hauled Tammy Abraham down after he latched onto Mustafi's helpful backpass and rounded Bernd Leno. Disasterclass.

Central defence remains an area for attention this summer – even with William Saliba‘s long-awaited arrival from St. Étienne – but there's already been some improvement.

For a start, the Gunners are conceding fewer shots (12.13 per 90) than they were under Emery and, latterly, interim coach Freddie Ljungberg (15.95). Most stark is the number of shots they're facing from outside the box (3.63 down from 6.78) which is an indicator of better pressing.

That theory is backed up by the fact Arsenal are now regaining possession 4.25 times in the middle third whereas they had been doing so 4.17 times previously. More telling, still, is the average length of their opponents' possession which has fallen from 10.37 seconds to 9.83 under Arteta.

Arsenal were conceding 1.5 goals (per 90) before Arteta arrived; that figure has dropped dramatically to 0.88. Despite that, their expected goals against (xGA) has risen from 1.17 to 1.26 meaning the chances they are giving up are of higher value. While that's only a small increase, it's a figure Arteta will want to reduce regardless.

2. Converted Saka into a flying full-back 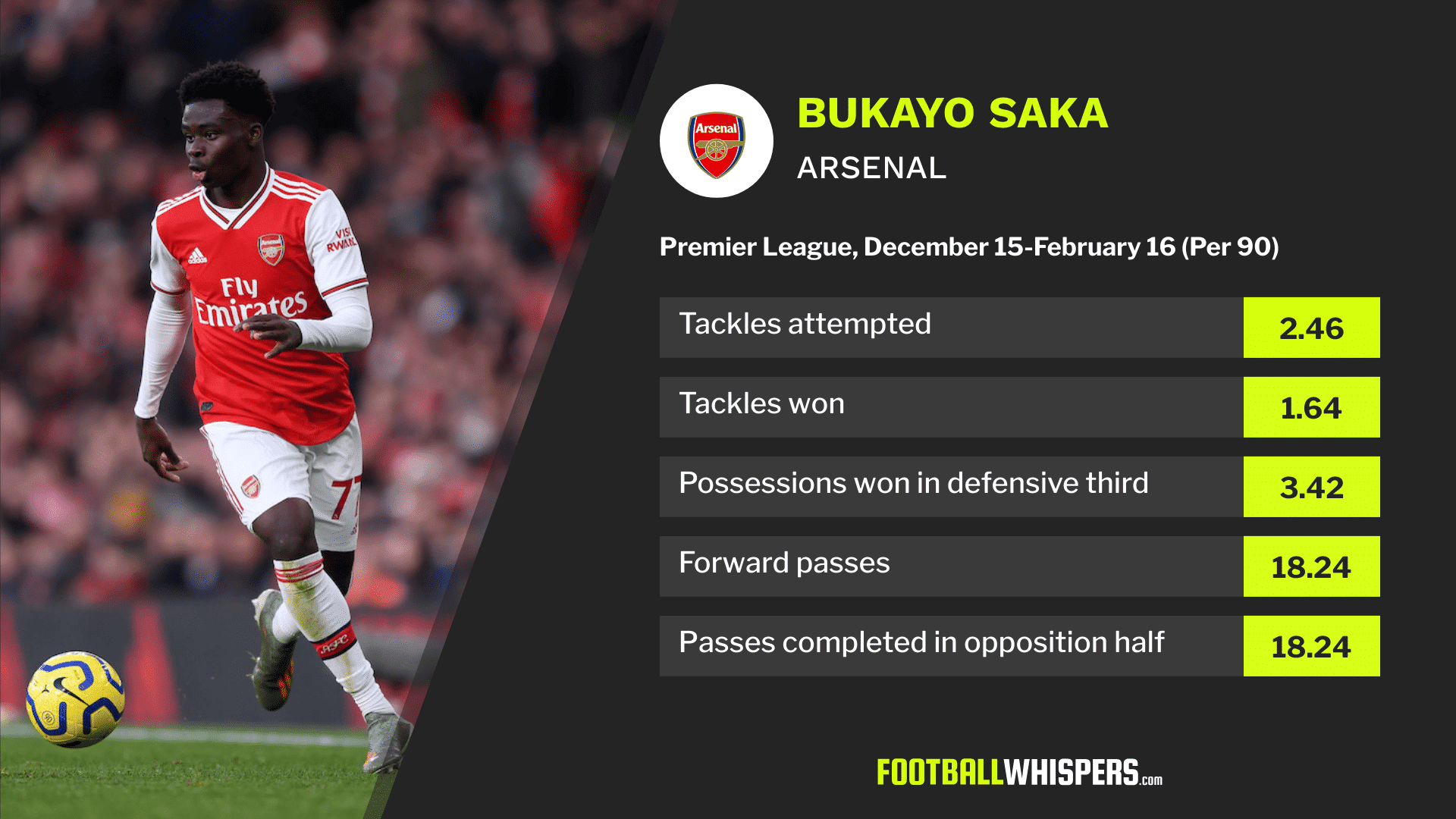 Arsenal fans are unlikely to look back on this season with much fondness. However, the emergence of Bukayo Saka has been one of the few high points and will be one of the legacies of Emery's short and unhappy reign at the Emirates.

It's easy to forget Saka only turned 18 on September 1 and, if he keeps going the way he has been, it'll be even easier to forget he's a winger by trade, rather than a left-back. That is where Saka has been deployed since the middle of December thanks to injuries to Kieran Tierney and Sead Kolašinac.

What started out as a short-term measure has gone rather well and, for the time being at least, Saka is ahead of the fit-again Kolašinac in the Gunners' pecking order.

Since making the switch to left-back for the visit from Manchester City on December 15, Saka ranks third in the Premier League for attempted tackles by a full-back, second for completed tackles and first for possessions won in the defensive third.

Not that his creative output has been compromised since moving backwards. The teenager is still making the most forward passes for a player in his position and is 16th for passes completed in the opposition half.  His role enables him to get forward still, supplying the width on the left with Aubameyang ahead of him – something we'll explain in the next point.

3. Found a way to play Auba and Laca

Having Aubameyang and Lacazette has been a blessing and a curse for Arsène Wenger, Emery and Ljungberg. But Arteta appears to have found a way to get both forwards in the side and contributing.

Using a 4-2-3-1 shape, Lacazette has played through the middle at the point of the attack with Aubameyang moving back to play on the left. But the Gabonese forward has the licence to come inside as an inside forward and attack the penalty area. Behind him, the aforementioned Saka bombs on and goes outside to provide width down the left.

On the opposite side, Héctor Bellerín or Ainsley Maitland-Niles tuck in to create a back three. This can be seen clearly in the visualisation below which pinpoints the average position for Arsenal under Arteta. 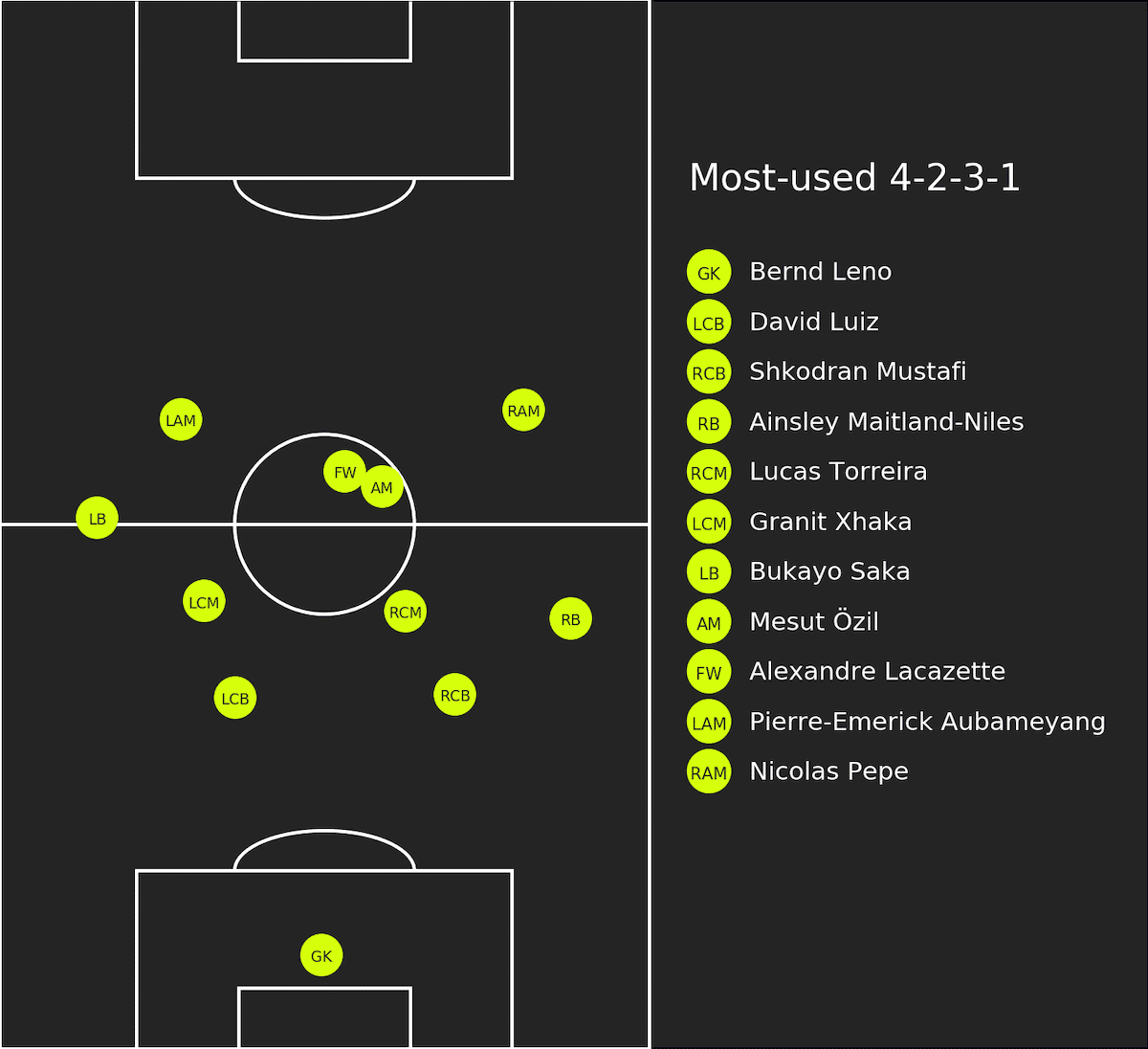 At No.10, the rejuvenated Özil – more on him shortly – is back in his favoured role as the hook between midfield and attack.

In the long run, one, or both, of Arsenal's star forwards could leave. Aubameyang has persistently been linked with Barcelona and Internazionale while Lacazette, who scored his first Premier League goal since December 5 against the Magpies, was reportedly an Atlético Madrid transfer target in January.

With Gabriel Martinelli and Eddie Nketiah pushing hard for more starts, Arteta has a new headache on the horizon. But it's a welcome one.

It wasn't a thing of beauty, but Özil's goal on Sunday was his first since April 21 – a fact which tells you everything you need to know about the German's form under Emery.

But since Arteta succeeded the Spaniard, things have started to look up for one of Arsenal's most-talked-about players. Özil has started all but one game for the North Londoners and has created 36 chances, resulting in one assist, for his side.

Earlier this season the 31-year-old outlined his desire to stay at the Emirates Stadium and see out his contract. He clearly isn't going anywhere fast and Emery's flat-out refusal to find a way to utilise Arsenal's top earner cannot have endeared him to the club's decision-makers.

There have been plenty of false dawns for the World Cup winner and it would be foolish to read too much into his display against a poor Newcastle side. That said, Özil completed 22 of 23 final-third passes, the fourth most of any player on the field, and created four chances – level with Pépé for the most.

He isn't the only problematic member of this Arsenal squad who's had his career in North London salvaged by Arteta. Granit Xhaka looked set to leave ahead of the January transfer window with Milan among his suitors. The Swiss, it's safe to say, was persona non grata at Arsenal after his outburst and very obvious dissent towards booing supporters when he was hooked against Crystal Palace in October.

The sorry episode cost Xhaka the Arsenal armband and looked to also have cost him his Gunners career. Fast forward a little under three months and the 27-year-old has quietly gone about re-establishing himself as an important cog in the side.

Xhaka led the way for passes (97) against Steve Bruce's side at the weekend, with 29 coming in the opposition third. Since working under Arteta, the number of forward passes he makes (per 90) has risen from 19.26 to 22.43 while his forward passing percentage has increased from 28.3 per cent to 31 per cent.

These are early days in Arteta's reign. Arsenal fans would do well to remember there was similar positivity around the Emirates Stadium in the early weeks and months of Emery's reign. But if the quiet revolution keeps up, there'll soon be plenty to shout about.