Beyond titles, his legacy will stand the test of time as one of the most important and influential managers of the modern era and a man responsible for the transformation of football in England.

Players have gone and gone from both Highbury and the Emirates, but there is no doubt some wonderful names have blossomed and impressed under the guidance of the French boss.

Who are his best success stories? We've picked an XI which encapsulates Wenger's stay at Arsenal. Is this the best collection of talent to play under him. Let us know what you think.

The club has had three great goalkeepers during the Wenger years. Petr Cech still has plenty of time to establish himself as number one but, at this moment, and with the Czech Republic shot-stopper showing signs of decline, Big Jens gets the nod.

After David Seaman, Wenger was desperate for a top goalkeeper, especially after seeing Manchester United struggle to fill the void left by Peter Schmeichel. Lehmann was the perfect man to do it. Occasional mistakes will sour some people’s views; generally speaking, though, he was a mountain between the sticks.

If you’re still unconvinced, look at the club’s goalkeeping record following his departure.

After being thrown in at the deep end and struggling, Hector Bellerin bounced back to cement his place as a guaranteed started in his breakthrough season last term; his progression in 2015/16 was one of the few shining lights in an otherwise disappointing season.

With Lee Dixon coming to the end when Wenger joined, Arsenal have been blessed with great right-backs under the current boss. Lauren certainly performed for a couple of years, but the future of the Spaniard is what is most exciting. If he remains at the Emirates for the next few seasons, he could become one of the greatest players to ever wear the red shirt. 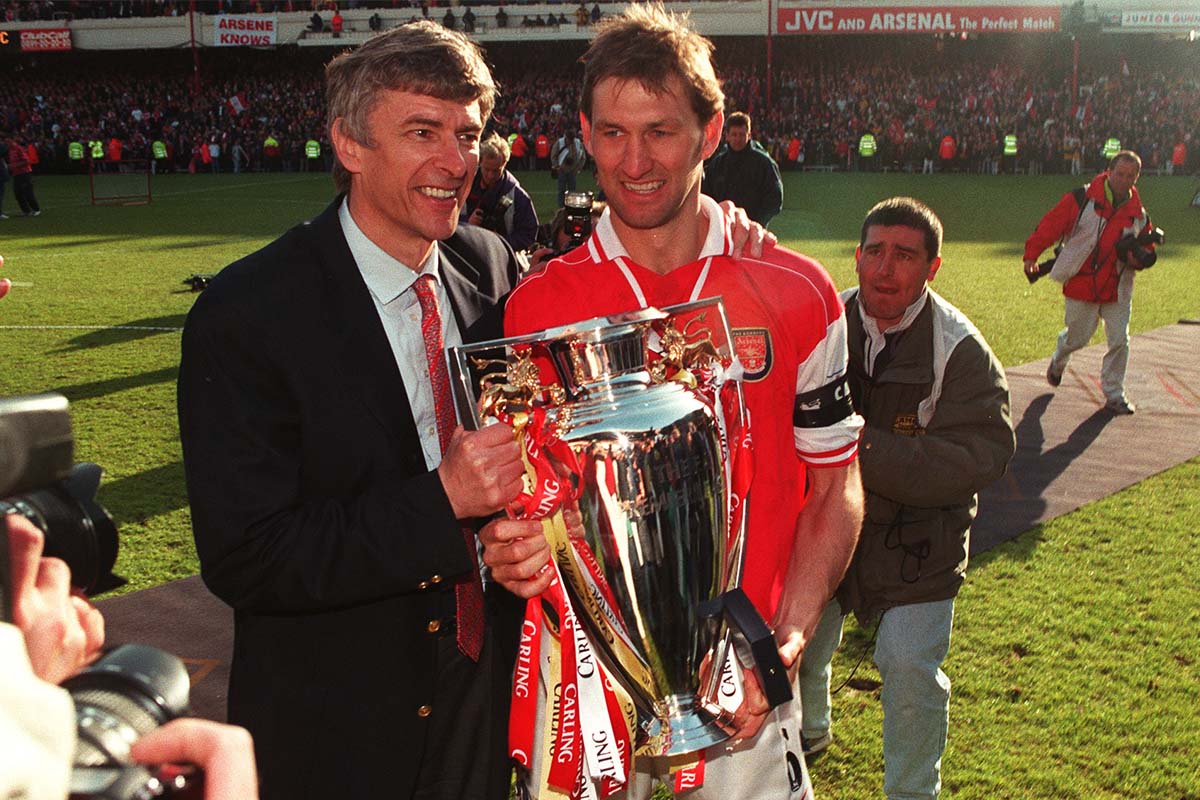 The commanding captain was already a club legend prior to Wenger’s arrival, but the success of those early years under the Frenchman catapulted Adams to even greater heights.

Two league and cup doubles would make him the only man to captain a title-winning side in three decades while THAT goal against Everton is one of the greatest moments in English football. An absolute legend and worthy recipient of the armband in this team.

The retirement of Adams could have hurt Arsenal badly. But fortunately, Wenger had signed another defensive master just 12 months earlier. Best of all, it left Tottenham fans crying their eyes out too. Sol Campbell is one of few made who have made the short journey from Tottenham to Arsenal.

After picking up his first title alongside Adams, Campbell formed an equally impressive partnership with Kolo Toure. Together, they would build the rearguard of the Invincibles team. Celebrating the title win at White Hart Lane was just the cherry on the cake.

The less said about him following his departure the better, but nobody can ignore how incredible Ashley Cole was during his time at the club. A couple of post-Cole left-backs have threatened to take the No.3 shirt in this mythical XI, but Invincible status gives Cashley the edge.

Unsurprisingly, French players have had a massive impact during Wenger’s tenure. On his day, Robert Pires was as good as anyone.

Non-Gooners will probably remember him best for that penalty blunder, but North London knows better. The tricky winger terrorised defences with a deadly combination of majestic skill, silky finishing and defence-splitting passes. It took him a year or so to settle, but after that he was simply sublime.

Pires should probably be on the left. But there is good reason that he isn’t. 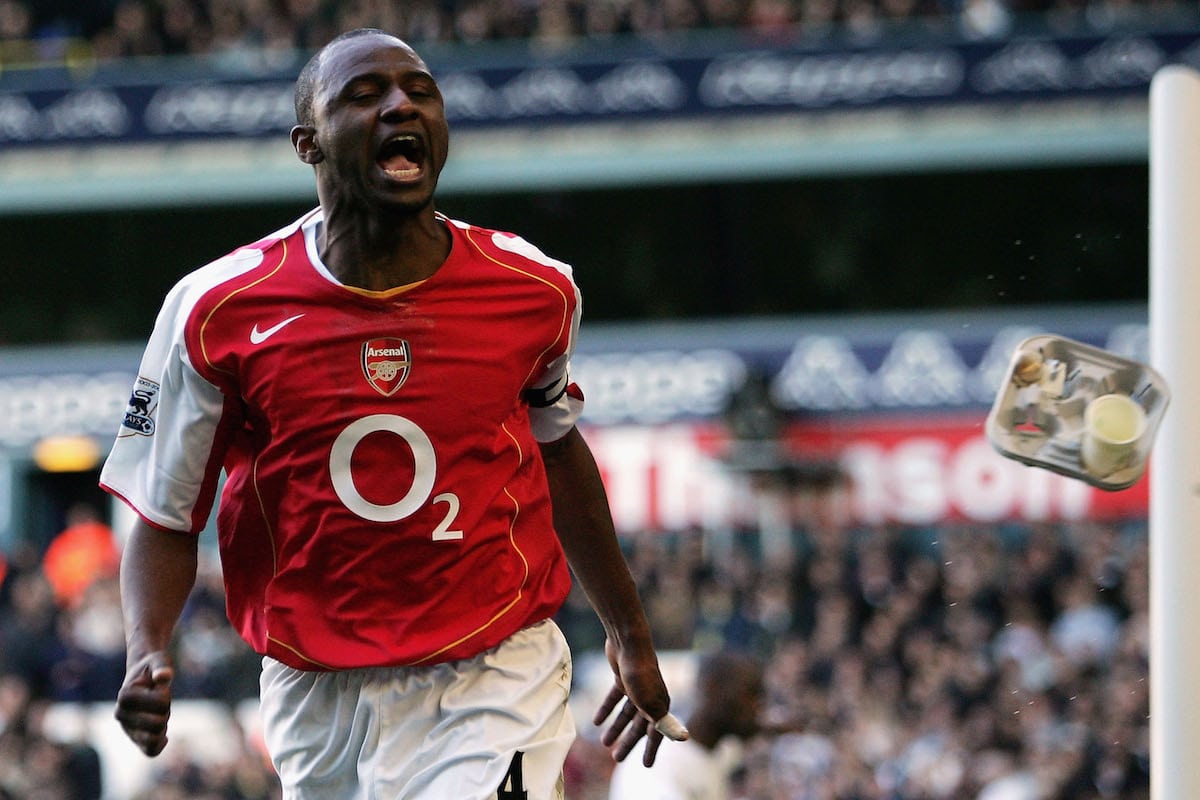 When Patrick Vieira arrived from AC Milan, little did we know that Arsène Wenger would be following suit. Even if we did, nobody would have forecast the success that the duo would share. Vieira was simply incredible.

Arsenal had the creative flair, and Vieira provided the brute force needed to knock Manchester United off their perch. The Vieira-Roy Keane rivalry was the greatest in Premier League history, and the combative Gunner was heroic throughout that entire period.

Could the commanding midfielder be the man who ultimately replaces his boss at the Emirates?

Brazilians haven’t always excelled at Arsenal, or indeed England, but there is no doubt that Gilberto Silva can be considered a huge success.

Often an unsung hero, Gilberto was instrumental in controlling the midfield areas, especially during the Invincibles season. As he had done during the 2002 FIFA World Cup for Ronaldo and co, the Brazilian laid the foundations for Arenal’s attacking stars to go and win trophies.

A return of 24 goals isn’t too bad for a defensive midfielder either.

Of every player to ever leave Arsenal, the departure of Marc Overmars to Barcelona hit hardest. I’m sure plenty of other Gooners feel similar about it too. The Dutch speed demon was simply uncatchable.

I’ve mentioned the Adams goal as one of the great moments, but Overmars’ strike at Old Trafford in March was the one that spearheaded that first success under Wenger by giving fans genuine belief. A cup final goal wasn't bad either.

The man that Wenger famously didn’t sign changed Arsenal football club forever. Once he came out of his shell, the Dutchman mesmorised both fans and Premier League defenders.

Goals didn’t come quite as frequently, but Bergkamp was a true pioneer of the second striker role as we know it. Nobody was better than the No.10 with a ball at his feet. English football had never seen the beautiful game made to look so simple.

And he still chipped in with over 100 goals, including that mind-blower at St James’s Park. Legend. 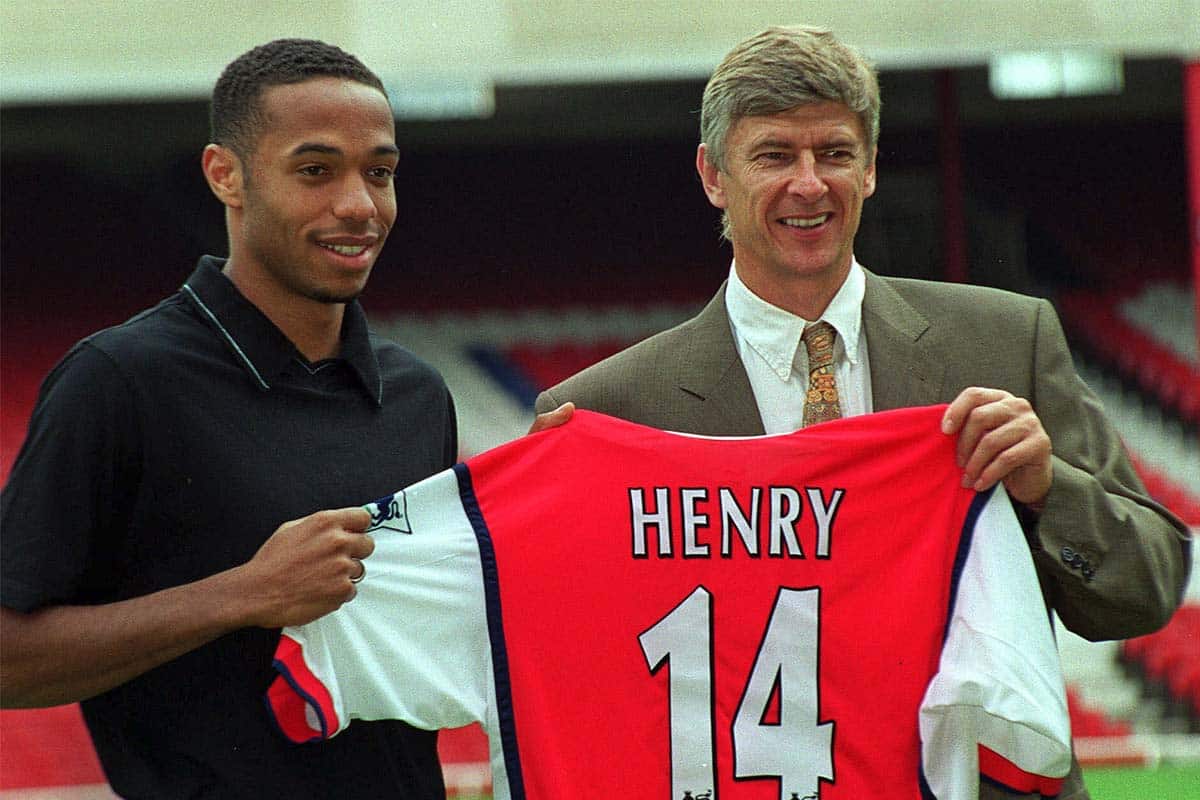 The king. Theirry Henry joined from Juventus as a raw winger; he left as the best left-sided striker on the planet. Over the course of eight seasons, the famous No.14 picked up three FA Cups, two Premier League titles, and Invincible status. Oh, and there’s the little matter of 226 goals too.

He came back in 2012 to chip in with goals 227 and 228. Even the statue outside the stadium doesn’t do Henry justice. Quite simply, he isn’t just the best player of the Wenger years; he’s the best player to ever grace the hallowed turf of Highbury and the Emirates.