When Arsenal sealed a club-record £56million deal for Pierre-Emerick Aubameyang during the final hours of last season's January transfer window, it looked like bad news for Alexandre Lacazette.

The Frenchman was himself a club-record arrival the previous summer, having joined from Lyon for £46.5million. After a bright start to life at the Emirates, scoring on his Premier League debut against Leicester City, Lacazette's form tailed off; by the time Aubameyang signed, he'd mustered a modest return of nine goals from 27 appearances, scoring every 213 minutes on average.

Not only had Lacazette lost his status as Arsenal's costliest-ever signing to Aubameyang, it seemed the new arrival from Borussia Dortmund was about to take his place in the Gunners' line-up, too.

However, 11 games into the 2018/19 season, Lacazette and Aubameyang are not only coexisting in the Arsenal team, they are thriving as arguably the division's deadliest striking duo.

Aubameyang hasn't stopped scoring since he arrived in England, netting ten Premier League goals from just 13 appearances last term and already on seven from ten games in the new campaign.

And, rather than suffer for the Gabonese international's arrival, Lacazette has rediscovered his best form this term, with five goals and two assists to his name.

What is most remarkable about the relationship they have fostered is that it initially seemed Lacazette and Aubameyang were not stylistically suited to playing together. Both began their careers as wingers but had built their reputations on being among the best out-and-out strikers in the game; in an age when genuine strike partnerships are approaching extinction, it was difficult to imagine either man wanting to reprise a wide role to accommodate the other.

Instead, Lacazette and Aubameyang's on-field understanding is one of mutual sacrifice, and, in turn, it is mutually beneficial.

Back to the future for Aubameyang

Beginning his footballing life as a speedy winger with AC Milan and through various loan spells before joining Saint-Étienne, it wasn't until Aubameyang's second season with Dortmund that he began to morph into a No.9.

Robert Lewandowski‘s departure from Signal Iduna Park in 2014, when the Pole signed for rivals Bayern Munich, created an opening for a striker in the BVB line-up; Aubameyang filled the vacancy, and in some style.

In the seasons that followed, up until his move to Arenal earlier this year, the 29-year-old became more and more a penalty-box specialist, paring down his bursts down the flank and concentrating on finding and dispatching high-quality chances close to goal. 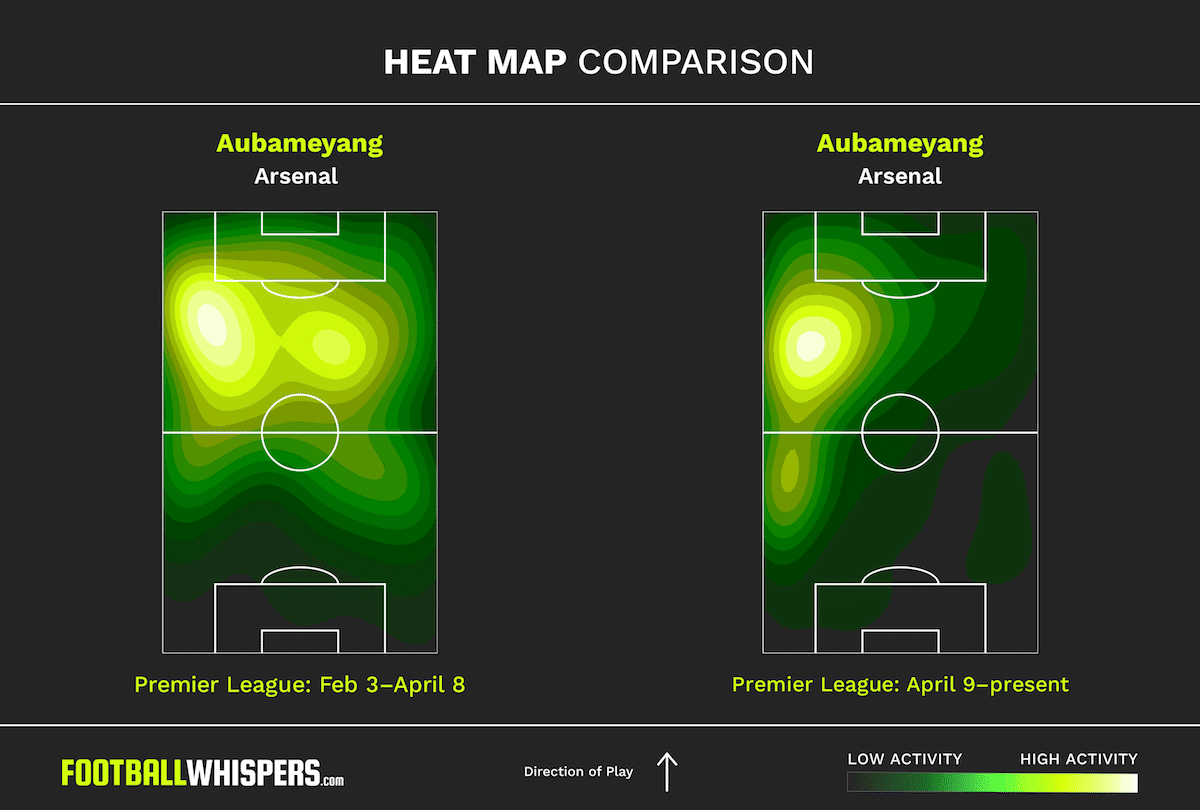 Averaging nearly a goal a game through his final two and a half years in Germany, one would imagine Aubameyang required some convincing in order to move back out to the left wing at Arsenal, but that is exactly what manager Unai Emery, and Arsène Wenger before him, managed to do.

Between his early February Premier League debut and Southampton's visit to the Emirates on April 8, Aubameyang played exclusively as a centre-forward. Since then, though, he has most often lined up wide on the left in a 4-2-3-1 formation, as evidenced by the heat map comparison graphic above.

This switch has allowed Lacazette to remain Arsenal's primary central striker, with Emery and his experienced predecessor evidently feeling either Aubmeyang is more suited to the wide role than Lacazette, or that Lacazette is able to offer more through the middle. 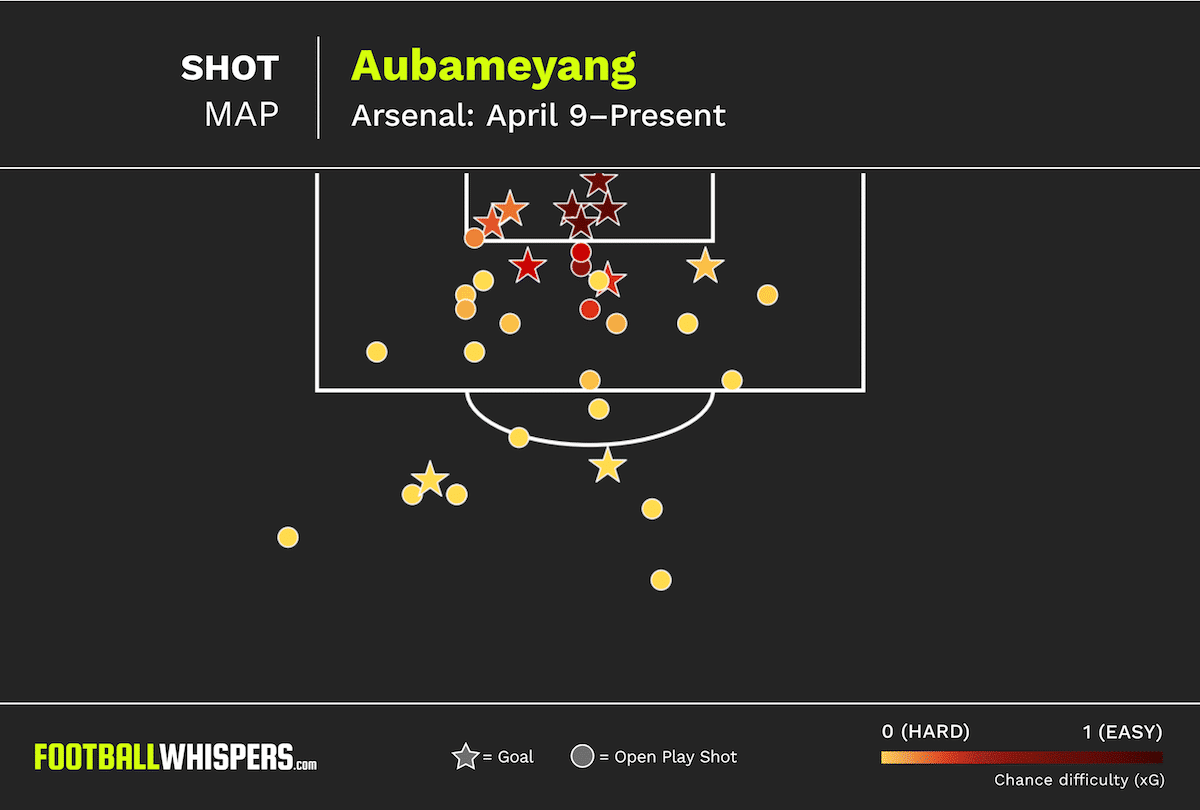 But Aubameyang's scoring rate hasn't slowed, nor has the regularity of high-quality chances he is able to get on the end of in central zones, as the above shot map illustrates.

So, while Aubameyang has accepted a reversion of sorts to a winger's remit, he is still able to threaten goal as much and as often as any top striker; his new role may be wider and deeper than he would deem ideal, but, as well as aiding Lacazette centrally, the Gabonese, with an expected goals per 90 average of 0.57, is still Arsenal's biggest goal threat.

Just as Aubameyang's adaptation is allowing Lacazette to perform in his preferred position, so too is the Frenchman's own tactical development benefitting Aubameyang. 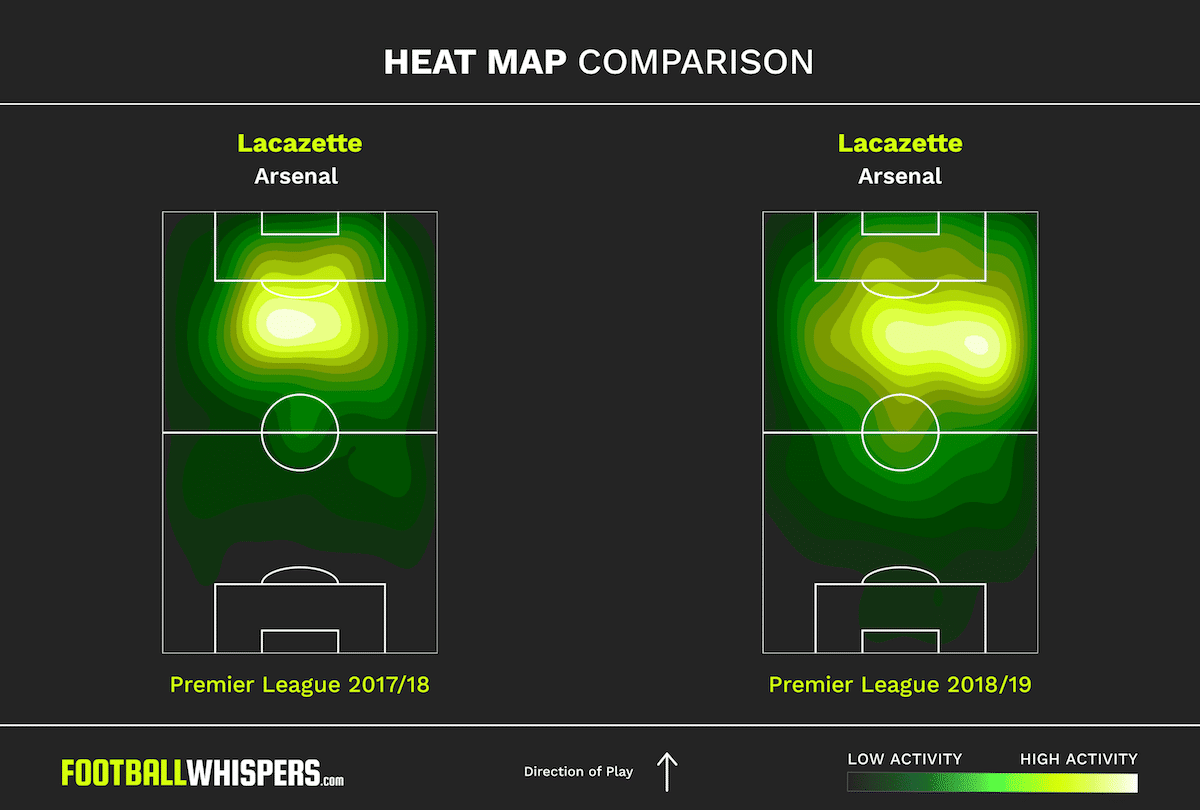 As the above heat map comparison graphic shows, Lacazette is now much more mobile across the frontline than last season. Where before he was acting very much as a conventional No.9, now he is just as active to the right of centre, thus creating space inside for Aubameyang to break into.

Indeed, Lacazette and Aubameyang have been so impressive together this season that former Gunners defender Martin Keown believes they are Wenger's greatest parting gift to the club, with the veteran manager having signed both in his final campaign at the helm.

“Arsene Wenger's biggest legacy at Arsenal is the firepower at the top of the team that killed off Everton,” Keown told the Daily Mail after Arsenal saw off the Merseysiders at the Emirates in September.

“Wenger splashed out more than £100million last season to bring in Alexandre Lacazette and Pierre-Emerick Aubameyang and they proved their worth in this victory.

“Arsenal look far more dangerous with the Frenchman through the middle and Aubameyang coming in from the left to join him.

“It effectively means defenders have two centre forwards to deal with. It is difficult for them to know who to pick up.”

In addition to their blossoming relationship on the field, it seems the France-born pair are developing a strong off-field friendship, too, which can only aid their continued success together.

“It is good; he is like my brother,” Lacazette said of Aubameyang after Arsenal defeated Fulham in October. Both players bagged a brace at Craven Cottage, with Aubameyang's double coming after starting on the bench as Emery rotated his options. “We talk every day and we love working together.”

As far as Arsenal are concerned, long may the bromance continue.