Florentino Pérez's masterplan upon becoming Real Madrid president was the now-famous ‘Zidanes y Pavónes' policy – the idea he could supplement the Galácticos with homegrown players from Real's cantera.

That was 2000. Having beaten Lorenzo Sanz to the coveted post, Pérez oversaw an era which saw Luis Figo, Zinedine Zidane, Ronaldo, David Beckham, Michael Owen and Robinho arrive at the Santiago Bernabéu.

Fast forward 19 years and Real are in another Galácticos era. This summer they have already spent a reported €300million on Lucas Vázquez. 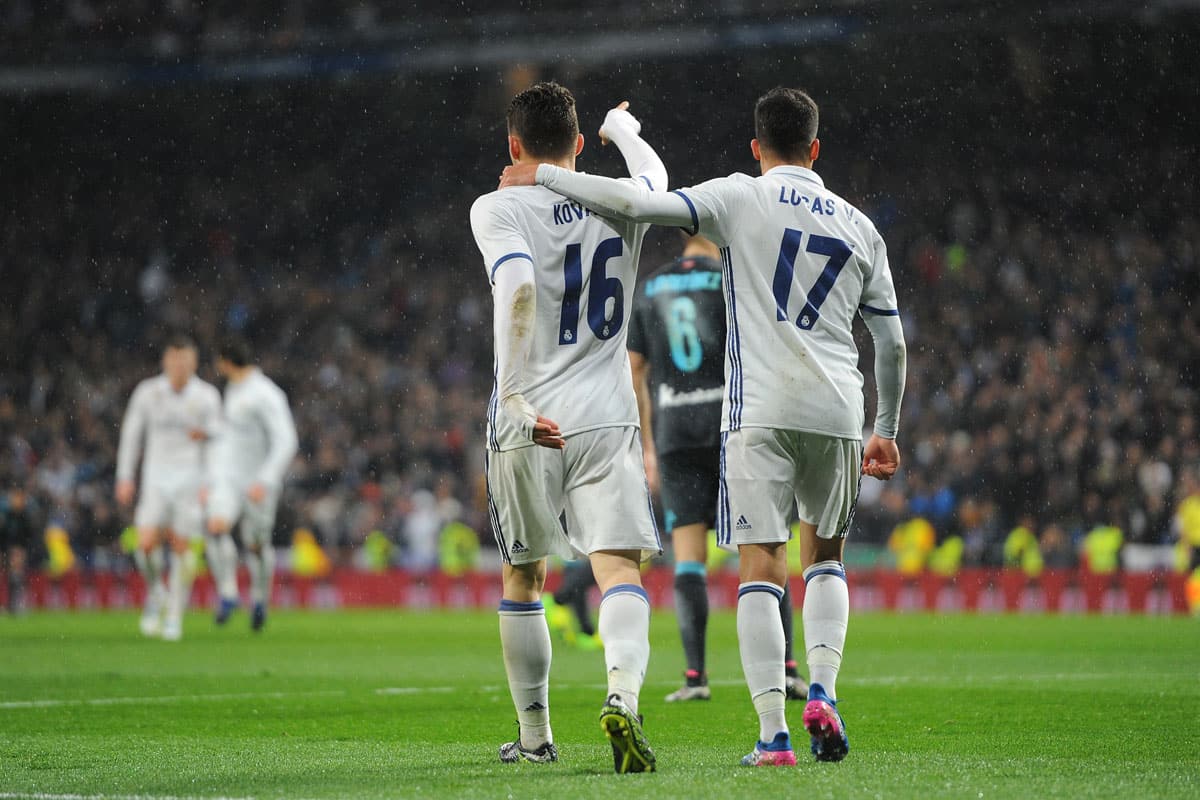 The 28-year-old is the perfect Pavónes. Low maintenance and versatile, he has carved out a decent career during one of the most successful periods in the history of one the world's biggest club. Rapidly closing in on 200 appearances for Los Blancos, Vázquez has been part of three Champions League wins, one La Liga triumph and a host of cup victories.

Yet he has never and never will be considered an integral part of any Real side and, with further spending expected this summer – the names of Paul Pogba, Neymar and Kylian Mbappé just won't go away – he is one of those deemed expendable by president Pérez.

Among those linked are Bayern Munich, Internazionale, Paris Saint-Germain and, most surprisingly, Arsenal. There are no shortage of gaps to plug in the Gunners squad – not least at the back where they do not have a single convincing central defender – but the attack is not an area which would be a high priority for most.

Unai Emery is evidently keen to bolster his forward line regardless, with a reported £40million offer for Crystal Palace talisman Wilfried Zaha evidence of that desire.

But this is not a case of two targets for the same role. The Ivorian spent much of last season up front and when he did play wide, he was utilised on the left-hand side, cutting in. 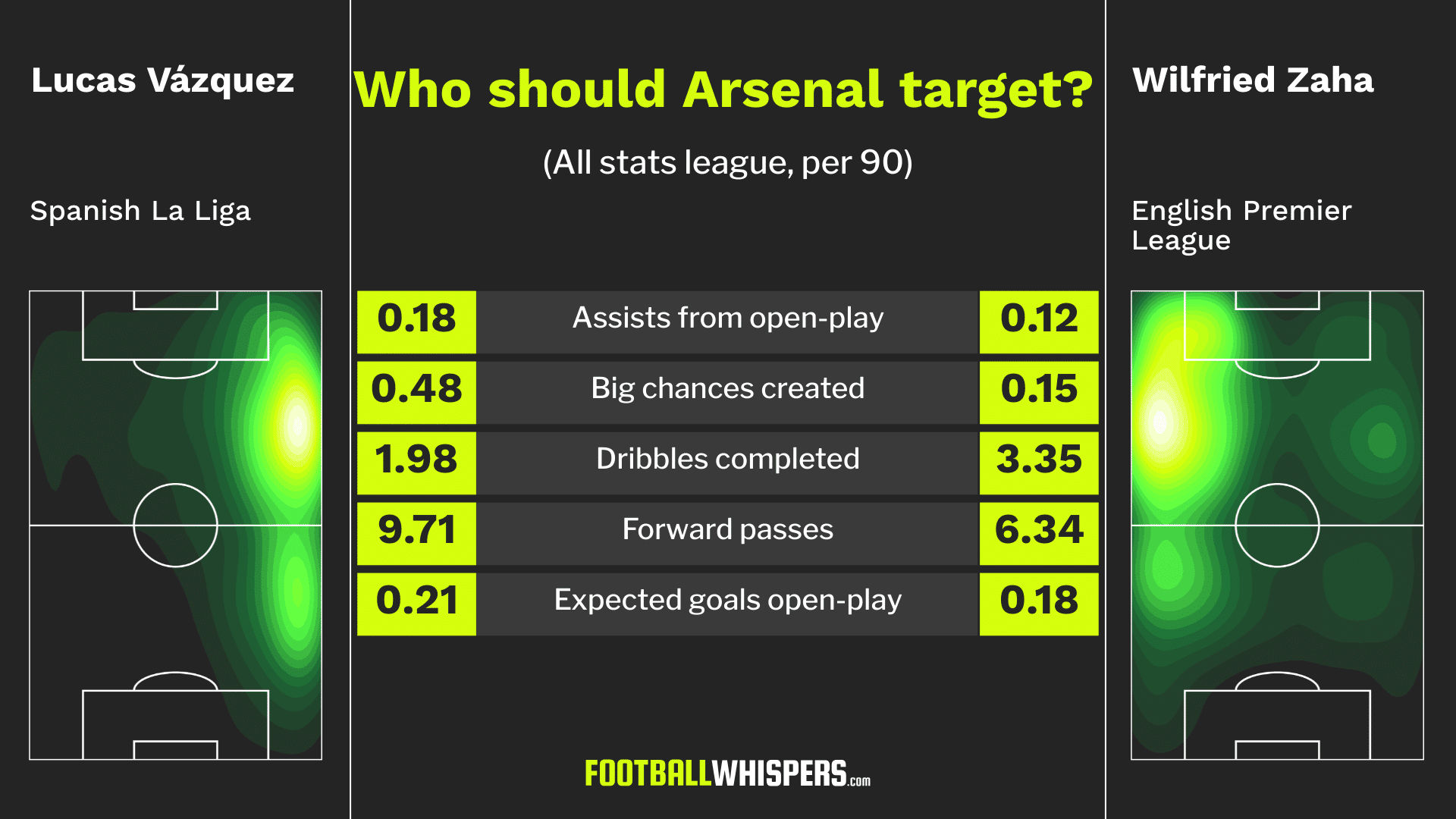 Vázquez is an out-and-out wideman and there is a vacancy on the right-hand side (more on this later). However, owing to his body of work in England the temptation is to consider Zaha a far better signing.

For a start, Vázquez has never made more than 16 LaLiga starts for Real; he's not managed to nail down a starting position as his own. Indeed, in Madrid's 2018 Champions League semi-final against Bayern he was deployed at right-back in the absence of Dani Carvajal, an unmitigated disaster even though Real progressed.

However, scratch beneath the surface and there is a surprising amount to like about the Curtis native. Taking his data for the last three seasons in La Liga, we start to paint a picture of Vázquez as more than a humble utility man just glad to be rubbing shoulders with Cristiano Ronaldo, Gareth Bale and Luka Modrić.

In that timeframe, he is second among La Liga midfielders for assists per 90 (0.33), second for big chances created (0.51), second for shot assists in open play (2.01) and first for touches in the opposition penalty area (6.12).

He does not score enough goals despite getting in the right areas, though. His expected goals total for that period is 13.07 (ranking seventh in La Liga) yet he returned little over half as many with seven.

On the subject of expected statistics, he was predicted to record 17.34 assists over the last three seasons. So while he ranks highly for the 17 he managed, he was not going above and beyond. 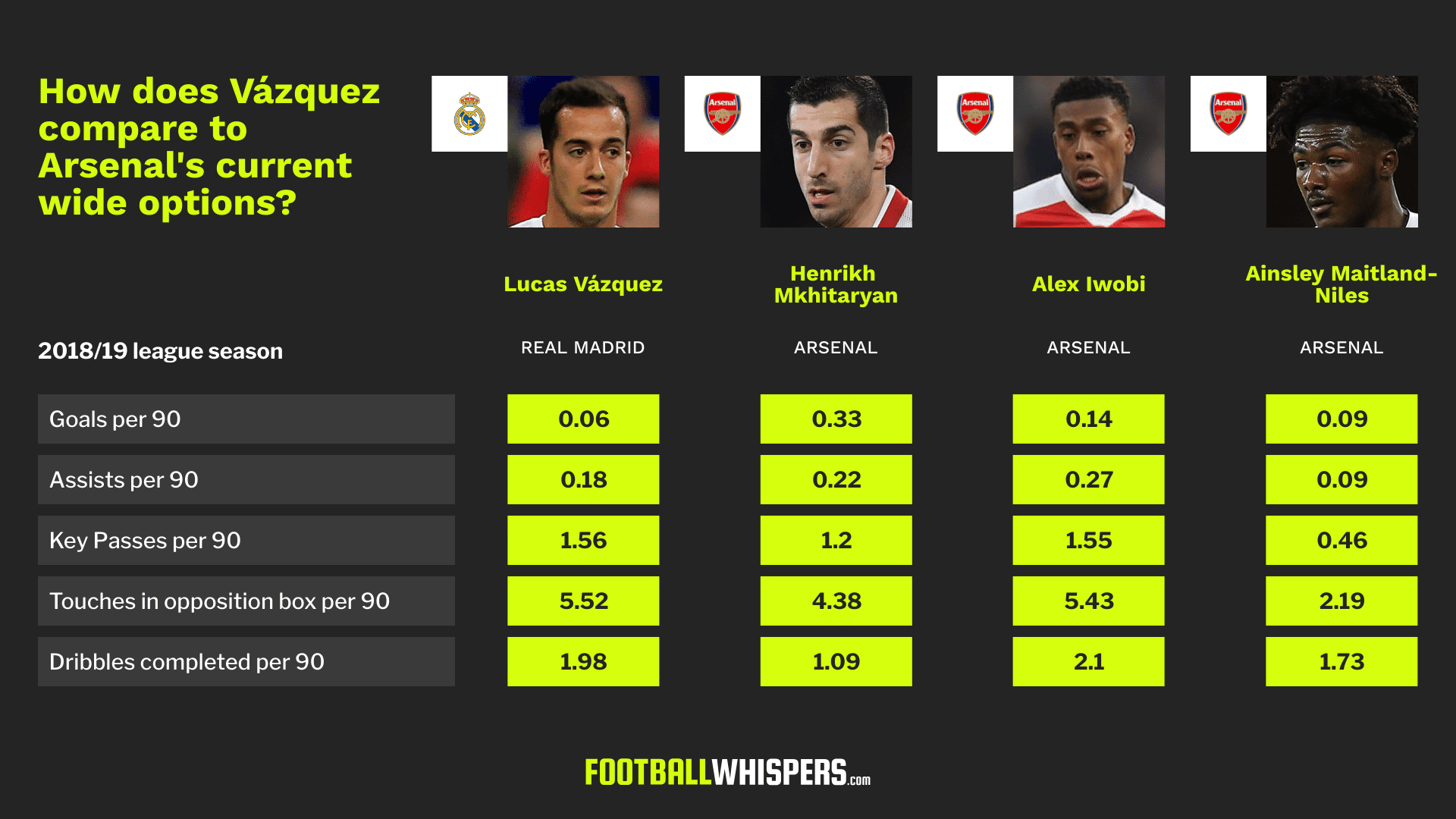 Back to Arsenal's existing right-wing options. In Emery's preferred 4-2-3-1, no-one claimed that spot as their own. Henrikh Mkhitaryan has never hit his Bundesliga heights in England, Mesut Özil is persona non grata to Emery, Alex Iwobi continually frustrates and Ainsley Maitland-Niles has become the Gunners' de facto right-back while Héctor Bellerín is injured.

All four played there last season but no-one convinced.

Taking Vázquez's La Liga stats for 2018/19 there is little which really leaps out in contrast to Arsenal's existing options. In terms of adding greater goal threat, reducing the reliance on Pierre-Emerick Aubameyang and Alexandre Lacazette, the Spaniard is unlikely to weigh in with many – he's notched just 11 in four seasons in La Liga and averaged 0.06 per 90 last term.

Furthermore, Real Madrid will not let Vázquez go cheaply. They will play on his status as a Spanish international and a member of a three-time Champions League-winning side to extract the highest possible fee from any bidding club as they attempt to finance moves for Pogba, Neymar and maybe, just maybe, Mbappé.

Arsenal's own budget is less war-chest and more combat cannister as they face up to the realities of another season outside the Champions League. The Gunners can ill afford another cannon which fails to fire.