A close game is expected in the Premier League on Thursday night as 6th-placed Arsenal play host to a Wolves side that sit just one place and 2pts behind them. The meeting between these two sides at Molineux earlier this month was settled by a solitary goal and we're predicting another tight and tense 90-minutes at the Emirates.

We're backing this game to end all square as both teams have played to a very similar standard so far this season and should cancel one another out on Thursday. Wolves have picked up 5pts from their last three trips to the Emirates so know what is needed to secure a positive result against the Gunners, who have themselves only won one of their last four home games in all competitions. Wolves have won their last four games on the road but Arsenal's defence has been pretty strong of late, keeping three clean sheets in their last five attempts.

There is a good chance that Thursday's clash will be a low-scoring affair as four of the last seven meetings between these two clubs have produced under 2.5 goals. Under 2.5 goals have also been scored, or not scored as the case may be, in five of the Gunners' last six outings, as well as in three of Wolves' last four fixtures.

All you need to know about Arsenal vs Wolves

Arsenal the favourites but Wolves are full of surprises

Last time out, Arsenal had the home advantage against Brentford but the two sides went in at the break goalless. However, just 3-minutes into the second forty-five, Smith Rowe put the Gunners in front after good work from Lacazette who claimed the assist. A second goal from Saka in the 79th-minute put the result to bed, despite Norgaard pulling a goal back for the visitors deep into stoppage-time. Arsenal could move above West Ham and to within a point of Man Utd with victory over Wolves on Thursday but even if they fail to do that, the Londoners will still have two games in hand over the pair.

Wolves went a goal up at home to Leicester after just 9-minutes, Ruben Neves putting the ball into the back of the net. The Foxes responded well, though, and got back onto level terms before the break via a 41st-minute effort from Lookman. There was only one goal in the second half and it went the way of Wolves. Podence scored the winning goal after good work from Dendoncker.

Arsenal: Gabriel Martinelli returns from suspension and could go straight into the starting eleven.

Wolves: Ait Nouri, Boly and Mosquera are all injury concerns for the visitors. 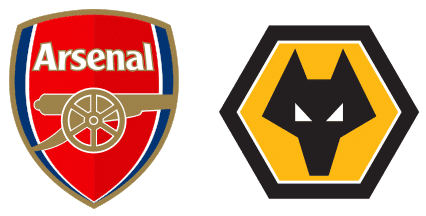