Arsenal look to continue their good form in the Premier League when they play host to newly-promoted Watford on Sunday. The visitors sit 16th in the table with 10pts to their name but a defeat this weekend could see the Hornets drop into the relegation zone.

Our Free Predictions for Arsenal vs Watford

Here are our predictions for Arsenal vs Watford.

Arsenal vs Watford: The Stats and Odds

Arsenal looking to maintain good run at the expense of Watford

Arsenal tactically outclassed Leicester in their own backyard last weekend, running out 2-0 winners in the end. An early header from Gabriel put Arsenal in front and a little over 10-minutes later Smith Rowe neatly placed the ball home to make it 2-0. Arsenal commanded this game and really deserved the win, their threat from the flanks caused the Foxes problems all day long. Arteta really looks like he is starting to turn this team around and get them playing the way he wants and while this project is only just beginning, the Spaniard may have won over a few more of the fans with the club's recent run of results and style of play.

Watford were looking to build upon their amazing 5-2 win at Goodison Park when they played host to Southampton last time out. However, Watford looked like a shadow of the team that put five past Everton and it was a goal from Che Adams in the 20th-minute that decided the fate of the 3pts. Watford remain inconsistent but do at least have the goals in them to fight relegation and remain in the Premier League this season.

Arsenal: Granit Xhaka won't feature due to injury and Kieran Tierney has a slight issue with his foot but should be available for selection.

Watford: Peter Etebo and Christian Kabasele won't make the short trip to Arsenal due to injury, Emmanuel Dennis returns following a suspension and Francisco Sierralta and Kiko Femenia will have to pass late fitness tests.

FAQ about Arsenal vs Watford 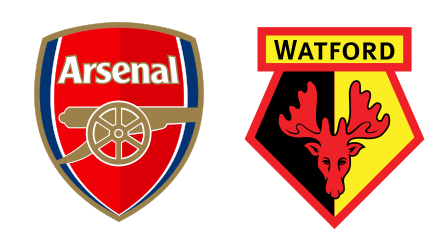