Arsenal could leapfrog local rivals Tottenham and put even more distance between themselves and Man Utd in the Premier League table with a win in Saturday's early kick-off. Man Utd will be demanding a response from their players following another hammering at the hands of Liverpool in midweek.

Arsenal have won three of their last six league meetings with Man Utd, including two of their last three clashes at the Emirates. The Gunners recovered following three straight defeats to secure an impressive 4-2 victory at Chelsea in midweek, while Man Utd lost 4-0 at Liverpool to make it three defeats from their last five fixtures in all competitions and defeats in each of their last three away trips.

Nketiah has been linked with moves away from Arsenal all season long and looks like he could move in the summer but while he remains an Arsenal player he could play a huge part in the club qualifying for the Champions League. In midweek, Nketiah scored twice against Chelsea, the striker's first league goals of the campaign, so Arteta is likely to keep him up-front on Saturday against a leaky Man Utd defence and we're backing the 22-year-old to score.

All the stats and odds for Arsenal vs Man Utd

Arsenal were staring a fourth straight league defeat in the face as they made the daunting trip to Stamford Bridge on Wednesday night. However, Nketiah gave the visitors the lead in the 13th-minute, showing that Arsenal meant business. Chelsea got back onto level terms through Werner and although Smith Rowe put the Gunners back in front in the 27th-minute, the pair went in level at the break following a rare goal from Azpilicueta. In the second forty-five, Nketiaj scored his second goal of the game to put Arsenal in front for the third time and in stoppage-time, Saka converted a penalty to wrap up an excellent 4-2 victory for Arsenal.

Man Utd moved to a three at the back system in an attempt to nullify Liverpool's attacking threat but the hosts still took the lead after just 5-minutes through Diaz. Salah made it 2-0 at the break and in the second half Mane scored a third and 5-minutes from time, Salah grabbed his second to complete a 4-0 humiliation for the Red Devils.

Arsenal: Tomiyasu, Tierney and Partey could all miss the game through injury.

Man Utd: Fred, Varane, Ronaldo, Shaw, Pogba and Cavani are all doubts for the trip to the capital.

FAQ about Arsenal vs Man Utd 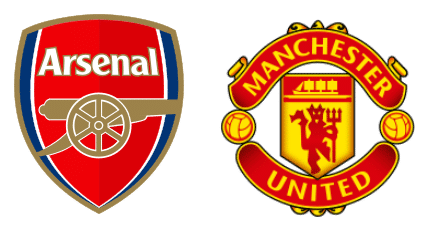