Arsenal sit have something to fight for on the final day of the season and need to make sure they beat Brighton to stand any chance of qualifying for European football next season. The Seagulls will be buoyed by their excellent win against Man City last time out and will be aiming to end the season on a high with another big scalp on Sunday.

Read on for our full match preview and prediction for Arsenal vs Brighton in the Premier League.

Arsenal have won 9 of their 17 previous encounters with Brighton, including a 1-0 win at the AMEX back in December. The Gunners are unbeaten in their last five matches, picking up four wins and a draw, but most importantly, they will have fans cheering them on at the Emirates this weekend.

Despite their overall poor performance this season, Arsenal have a better defensive record than a number of the clubs that currently sit above them in the Premier League table and are more than capable of securing a clean sheet against the Seagulls, as they proved in December. Under 2.5 goals have been produced in three of the Gunner's last five matches, as well as in four of Brighton's last six outings.

Nicolas Pepe has chipped in with 8 Premier League goals for Arsenal this season, including two last time out against Crystal Palace. The Ivory Coast winger arrived at the Emirates with a reputation for scoring goals but failed to live up to the hype in his first season. Pepe has improved on last season's total and is in good form right now with 5-goals in his last 9 appearances for the London club.

Key Stats and Figures for Arsenal vs Brighton

Arsenal must win and hope results elsewhere go in their favour

Arsenal are finishing the season strongly and will want to go out on a high in front of their fans this weekend. The Gunners have won each of their last three league games and have kept three clean sheets in their last five fixtures, so you can see why we're backing the hosts to beat Brighton on Sunday. Arsenal could secure the domestic double over Brighton this weekend having won 1-0 at the AMEX earlier in the campaign but will be without goalkeeper Ryan who can't play against his parent club. David Luiz and Hector Bellerin could return to the Arsenal squad following injury.

Brighton make the trip to the capital without the suspended Maupay but Dunk does return to the squad. Veltman, Propper and Welbeck all have knocks but are in contention to make the squad for this weekend's clash, while Lamptey and March have been ruled out. Brighton secured one of the most impressive Premier League wins last time out, beating the champions Man City 3-2. That result was down largely to the home fans finally being allowed back into the stadium as they helped push Brighton forward and gave the players something to play for. This weekend will be much more difficult as it will be the Gunners with the 12th man in their corner.

Arsenal vs Brighton – Your Questions 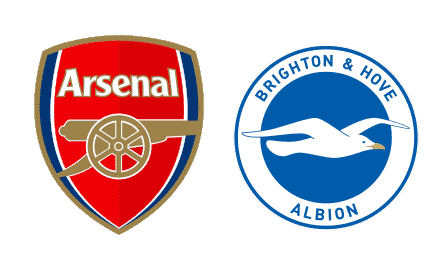