Arsenal Tula follow up their trip to Lokomotiv Moscow with a home game against Rubin Kazan on Friday in what is a tough run of fixtures at the start of the new season. Rubin Kazan secured an important win over Spartak Moscow last time out but need to follow that up with another win against an Arsenal side that look set for another relegation battle.

Rubin Kazan ended pre-season with a couple of disappointing defeats but were clearly saving their best for when it counted as they ran out 1-0 winners over Spartak Moscow in their first game of the season. Friday's guests have won each of their last four encounters with Arsenal Tula and we're fully expecting Rubin Kazan to claim another 3pts.

The last two encounters between Arsenal Tula and Rubin Kazan have produced over 2.5 goals with Kazan winning 4-2 and 3-1. Four of Arsenal Tula's last six outings have ended with at least three goals being scored and the same can be said for three of Rubin Kazan's last five fixtures.

We're predicting goals in this game for both clubs as three of their last six head-to-heads have ended that way. Both teams have scored in four of Arsenal Tula's last six matches in all competitions, while Rubin Kazan have only failed to find the back of the net in one of their last five games.

Arsenal Tula took the lead away at Lokomotiv Moscow last weekend and held that advantage all the way through to the final 10-minutes. However, two goals from Zhemaletdinov and one from Smolov saw Arsenal crumble in the final moments and have nothing to show for their efforts. Arsenal are going to have to be at their very best if they want to take anything from Friday's game, despite having the home advantage against Rubin Kazan.

The visitors have enjoyed playing against Arsenal Tula in recent seasons, winning each of the duo's last four meetings in the Premier League. Samoshnikov scored the only goal of the game as Rubin Kazan claimed a 1-0 win over a Spartak Moscow side that finished above them in the last campaign. That morale-boosting victory will surely give Rubin Kazan all the confidence they need to put Arsenal Tula to bed on Friday, as anything less than a win will be deemed disappointing. 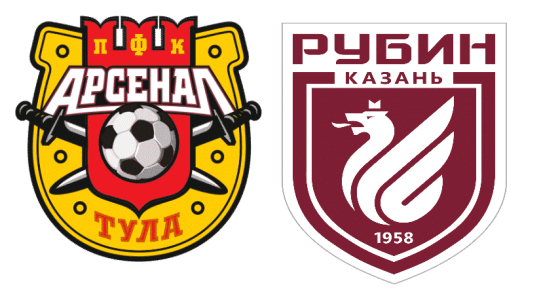