Lucas Torreira was eased into life in the Premier League by Arsenal boss Unai Emery. In the opening weeks of the season, the Uruguayan was used primarily as a substitute, introduced to tighten things up and harry the opposition.

Now, though, he is an indispensable part of Emery's side. There is feeling that without him in midfield, the Gunners would be vulnerable, exposed. Torreira offers a level of protection in front of the back four – or back three, as was the case against Bournemouth – that is almost unfathomable. He is everywhere, omnipresent, and constantly in the right place at the right time.

For Arsenal, this has been a long time coming. They have needed a midfielder like this, one with tactical discipline, composure and consistency, for years. Now they have one, and the impact he has had is clear.

In the north London derby on Sunday, Torreira will be a key man. His ability to supress Spurs’ front four, the likes of Christian Eriksen and Dele Alli, could help to sway the game in Arsenal’s favour. Torreira is a menace for creative players, those who need space to find a pass or fire a measured shot off.

The former Sampdoria man has made the most tackles per game of Arsenal’s regular starters this season: 2.47. He ranks high for interceptions, too: 2.06 per 90 minutes.

It should not be assumed that Torreira is just a destructive presence in midfield, though. He is an accomplished passer of the ball – only Granit Xhaka averages more passes per 90 than his 71.34 – and is not afraid to shoot when he finds himself in an advanced position. 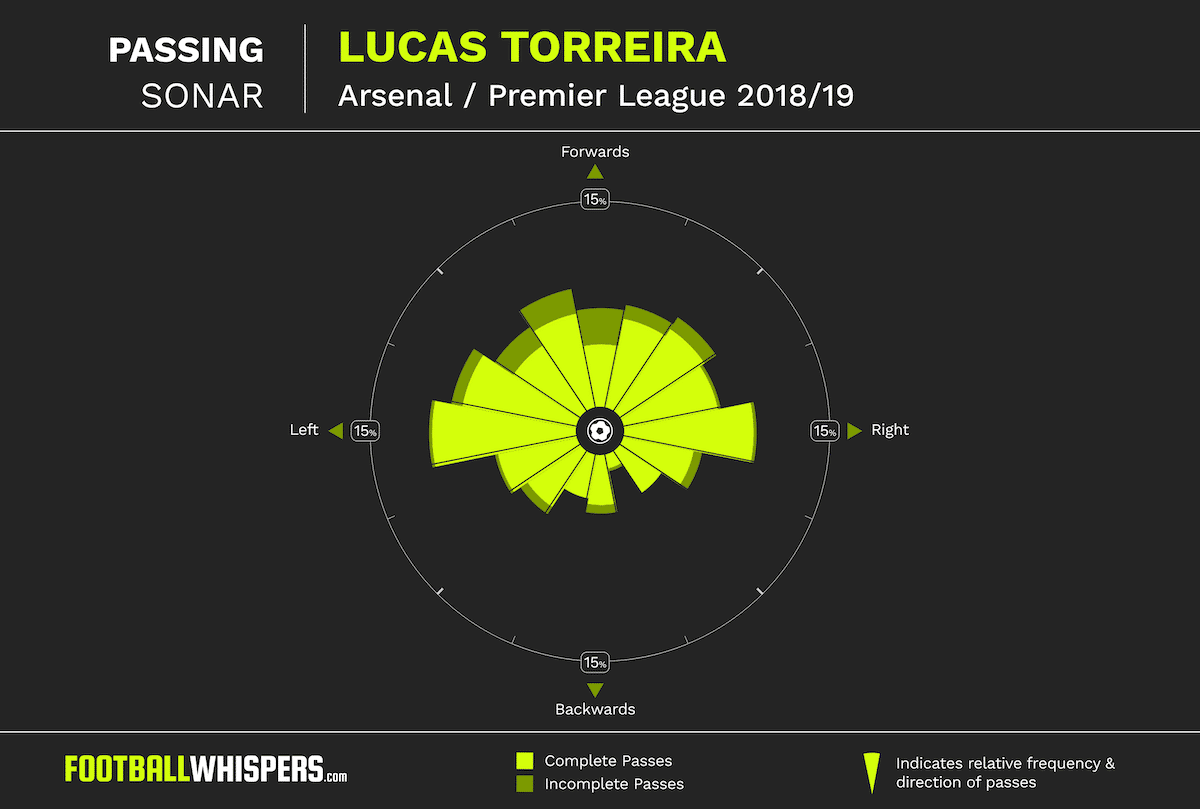 Torreira is rarely dispossessed – he loses the ball, on average, 0.41 times per 90 – and is amongst the most fouled players in the division. This is because he is so astute at nipping in and coming away with the ball.

Torreira’s defensive discipline has allowed his midfield partner Xhaka more freedom and the result has been the best run of form in the Swiss international’s Arsenal career. They have struck up a functional partnership that gives the team balance. When Xhaka has an occasional lapse in concentration, Torreira invariably steps in to cover.

That will be crucial against Tottenham, whose quick transitions in attack could cause Arsenal problems. They certainly produced a few headaches for Chelsea.

Torreira is already establishing himself as something of a fan favourite at the Emirates, but his performances in these games will truly elevate him to the next level.

“I am going to get to grips better with all the tactical aspects of how Arsenal play,” Torreira said in an interview with the Evening Standard earlier this month. “Last year, I got used to Sampdoria’s style of play, where we had three players across the midfield, and I’m now adapting to Arsenal’s and there just being two of us, playing alongside Granit Xhaka.

“There are many things I can improve on, but that will come with time. We are going to have a much better understanding, we’ll only improve and when things are going well the team will become even better.”

Torreira is clearly aware of his own continual development. It is easy to forget that he is only 22, that he is one of the least experienced players in this Arsenal team. He does not play like a youngster, though. There is a maturity to his game that allows him to play in the manner of a seasoned professional.

There are, of course, areas to work on. Occasionally, Torreira makes an unnecessarily rash challenge. Though he is terrier-like and combative, he can be outmuscled by more powerful opponents, simply because he is 5 foot 5.

But the positives far outweigh the negatives. Torreira is emerging as the ideologue of this new Arsenal team under Emery. The days of humiliating defeats, of fragile, meek midfielders collapsing under pressure appear to be over. This is a team with resilience and determination, and at the heart of it is Torreira.