Arsenal are the Premier League club who could be busiest in the final hours of the transfer window with deals for Julian Draxler and Thomas Lemar likely to go to the wire.

Gunners boss Arsène Wenger knows the French market inside out, as he has proved time and time again, and could return before the window shuts at 11pm GMT.

A deal for Lemar, who is a Liverpool transfer target, had looked all but over. However, the north Londoners have, according to the Daily Mail, seen a £92million bid for the Monaco player accepted.

But Wenger has more than one iron in the fire and could instead move for out-of-favour Paris Saint-Germain No.10 Draxler, who only moved to Paris from Wolfsburg in January.

The German international has been told he can leave PSG as the Parisians attempt the balance the books following the world-record signing of Neymar from Barcelona.

With Alexis Sánchez a Manchester City transfer target, the Gunners appear to be making plans for life without last season's 30-goal top scorer.

Neither Draxler nor Lemar would play as a striker. That is because the club-record signing of Alexandre Lacazette from Lyon has already, more or less, filled the gap which will be vacated by the Chilean.

Whichever of the duo signs will occupy one of the two No.10 roles behind the French international, instead, and compete with Mesut Özil, Theo Walcott, Danny Welbeck and Alex Iwobi.

Here we compared their key statistics from the 2016/17 Ligue 1 season to attempt to get a handle on who would make the better addition for the Gunners. 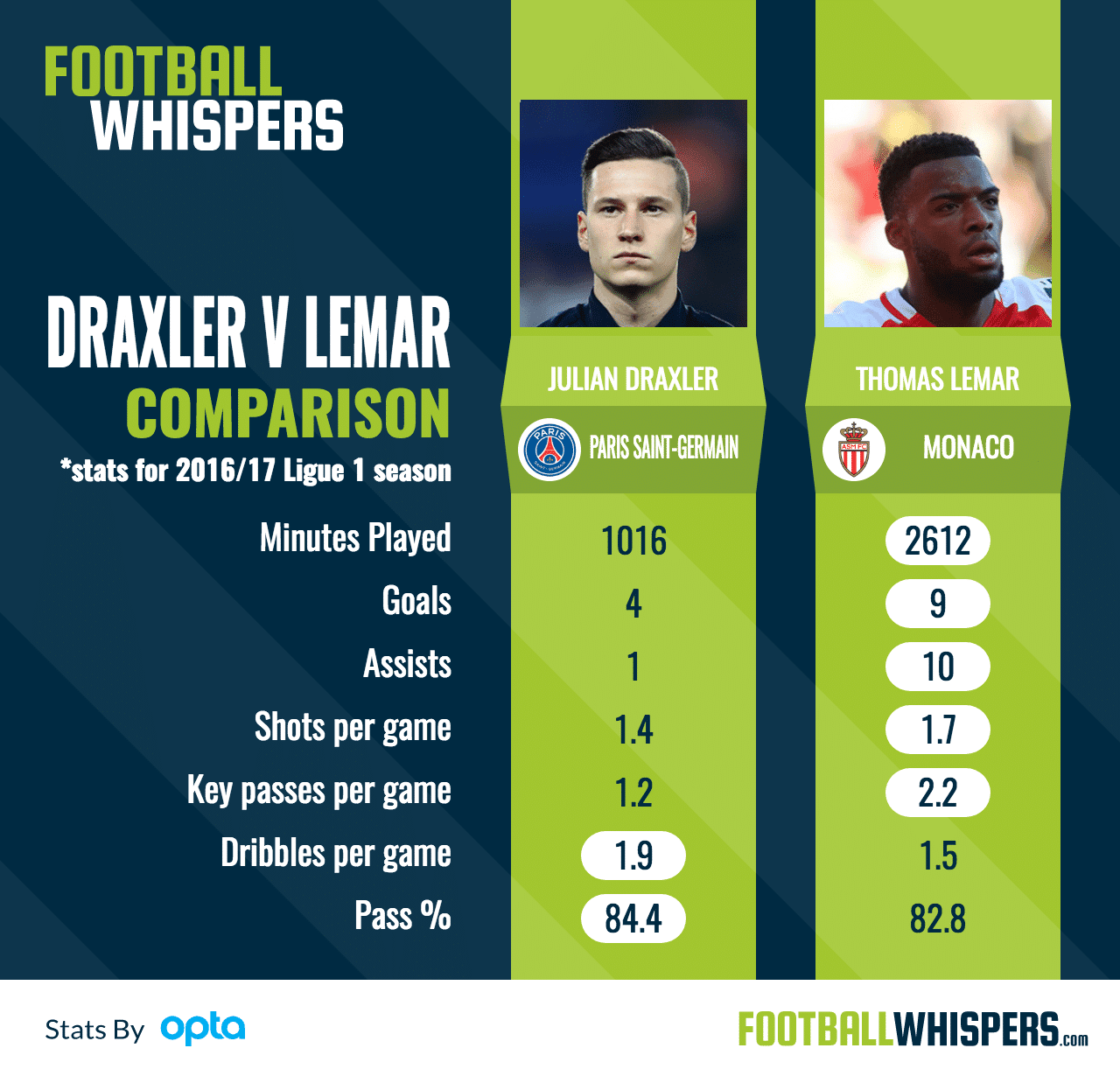 In numbers there is no comparison. But what those figures don't give you are the full context. Draxler only arrived at the Parc des Princes in January and did not force his way into Unai Emery's side on a regular basis, making just ten Ligue 1 starts.

Despite that, he still managed four goals and was only just behind Lemar in terms of shots per per game. The German, who skippered die Mannschaft at this summer's Confederations Cup, also posted better figures for dribbles per game and his pass completion percentage.

At this stage it is anyone's guess which player – if, for that matter, either – will move to the Emirates. But Wenger has history for getting the best out of the French market and you wouldn't bet against him doing so again.