With three league titles and four domestic cups to his name, 21-year-old Christopher Nkunku has a medal collection that would be the envy of most senior pros.

A Paris Saint-Germain debutant at the tender age of 17, he has racked up more 70 senior appearances for the Ligue 1 champions and is a regular at under-21 level for France.

But the young midfielder is still honing his craft, sharpening the tools that, with the right guidance and opportunity, could see him become a top-class midfielder in the near future. That's why Arsenal, who are reportedly readying a summer move for Nkunku, must be patient with him if they get their man.

The Gunners will lose Aaron Ramsey to Juventus at the end of the season, the Welshman having already signed a pre-contract and passed a medical with the Italian giants ahead of a Bosman move to Turin when his Arsenal contract expires.

Seeing one of their most influential and reliable players leave for free will be a bitter pill for Arsenal to swallow, and it seems manager Unai Emery intends to turn to a familiar face to fill the gap the Welshman will leave behind. 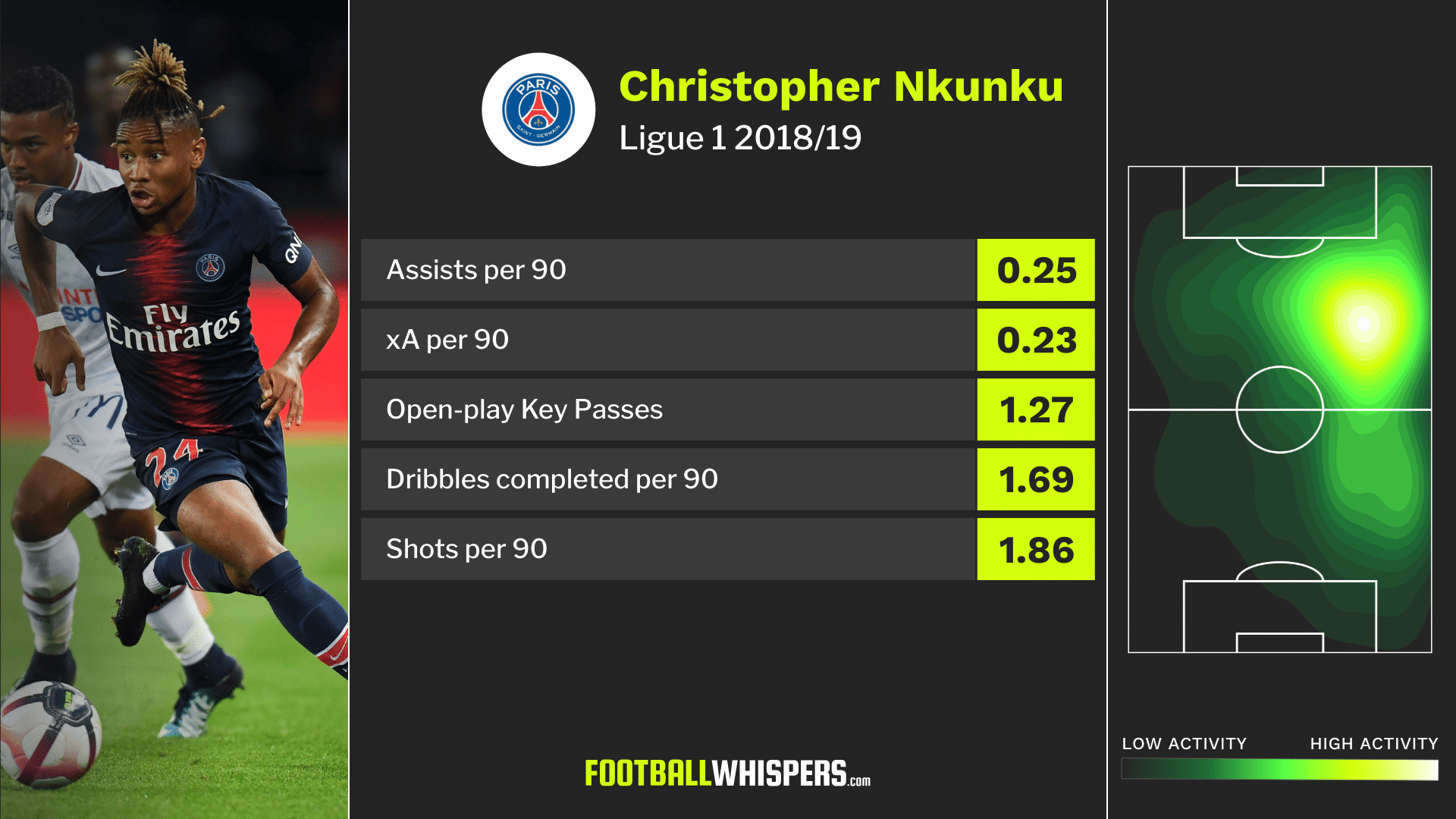 It's a ploy that proved disastrous in January, with Denis Suárez, whom Emery worked with at Sevilla, signed on loan from Barcelona only to barely feature for the north London club, making just four substitute appearances in the Premier League for a total of 67 minutes of action.

Emery will hope for greater success in returning to Paris Saint-Germain for Nkunku, if reports a £30million bid being prepared are true.

Although Nkunku made his senior debut at the Parc des Princes under Laurent Blanc, Emery's predecessor, the gifted midfield prospect got his first taste of regular top-flight action under the Spaniard.

Emery spent two season in charge in the French capital, claiming one Ligue 1 title and four domestic cups. Nkunku made 20 league appearances during Emery's second and final campaign as PSG boss, amounting to 621 minutes, in which the player scored three times, adding to his first senior goal for the club the season before.

Able to play centrally in a box-to-box midfield role or wide on the right, Nkunku stood out as a prospect with boundless energy, excellent close control and the ability to wriggle free from challenges in congested central spaces.

This season has seen Nkunku develop further still under new PSG manager Thomas Tuchel. With 12 starts, the youngster has doubled the amount he was given last term by Emery, and his 1,062 Ligue 1 minutes is almost as much as his total for the two campaigns the now-Arsenal boss oversaw.

And although he is still behind the likes of Marco Verratti, January signing Leandro Paredes and former Manchester United man Ángel Di María in the PSG pecking order, he is already performing in line with the best midfielders in France.

In terms of creativity, Nkunku's average of 0.5 big chances created per 90 minutes is third-best among Ligue 1 midfielders this term, and his 0.23 expected assists per 90 ranks him fifth.

Nkunku, then, is clearly a player destined for great things, and he would no doubt be well-suited to Arsenal, a club with a strong track record of developing young French players into Premier League stars from Arsène Wenger's time in charge.

But to expect the 21-year-old to come in and be an instant hit, a direct replacement for the Juventus-bound Ramsey, would be misguided.

Nkunku, if indeed Arsenal are able to prise the young player away from PSG, taking advantage of his reported refusal to commit to fresh terms at the Parc des Princes, will need time and patience; the task of having to fill the void left be the exit of one of the Gunners' best players is pressure he doesn't need.

With one eye on the future and a careful developmental path laid out for him, though, Nkunku could be a star at the Emirates for years to come.