This summer promises to one of Lyon's biggest summers to date. Stars like Alexander Lacazette and Corentin Tolisso look set to depart and the former French champions will have to decide if Nabil Fekir is able to carry this team forward.

Lyon are set to finish outside the top three in Ligue 1 this season. Regardless of form, there might not be enough fixtures left to catch Nice who are 14 points behind.

That will mean no UEFA Champions League place for OL, missing out on the financial rewards that the group stage brings and relying on the income provided by the departures.

President Jean-Michel Aulas will want around €60million for Lacazette, a transfer target for Arsenal and Atletico Madrid. Tolisso admitted at the weekend that the idea of a move to Juventus excites him, bringing another €40million to the table.

The Year of Nabil Fekir

In 2015 Lyon were running rampant. The combination of Fekir and Lacazette upfront looked almost unstoppable. Playing 4-4-2 with a diamond midfield, the Franco-Algerian number 10 pushed up to become a forward and it was a masterstroke.

Just 21 at the time, Fekir finished the season with 13 goals and nine assists and earned himself a call-up to the France national team.

His form earned him links to the Gunners, Barcelona, and scouts from all over Europe were descending on the Stade Gerland to get a look at OL’s breakthrough forward.

Going into the 2015/16 season all the anticipation was around just where his talent could take him. But then disaster struck.

After four league fixtures, playing against Portugal at the Stade de France, Fekir fell awkwardly, rupturing his ACL knee ligament. It would keep him out until April. He knew he would miss Euro 2016 but everyone was hopefully that he would have the time to get fully back to his old self.

“Everything is going well,” he told L'Equipe in August. “Better than at the end of last season. I feel little niggles from time to time. But I spoke about them with the surgeon and he told me that it was normal. I hope that it will clear up over time.” 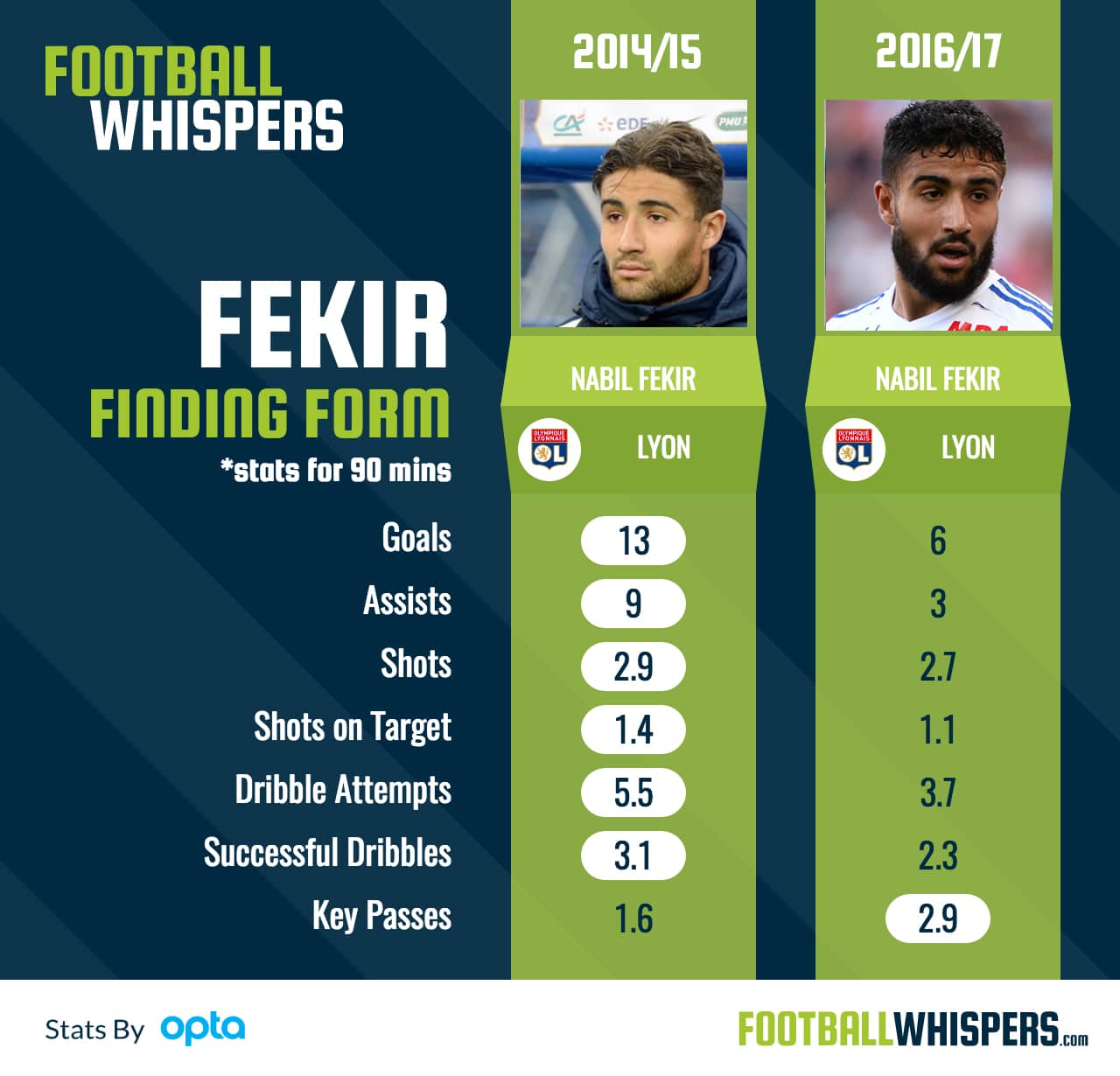 The 23-year-old would start seven of the first 10 fixtures, picking up two goals and two assists. It looked to some degree that he was back to his old self, but with Lyon struggling for form, there were still doubts that he was 100 per cent.

A red card against Nice showed frustration. Fekir tried to track back, couldn’t get in front of his marker and put in a poorly timed tackle from behind just 27 minutes into the 2-0 defeat.

In his next 11 league games, he would score just twice. Just when you think the old Fekir is gone, he will show you moments of magic.

“At the moment, I'm not very good on the pitch, so I haven't received any offers from any big clubs,” he told Planete Lyon in December.

“Also, with my agent, we're not talking about a future departure at all. I simply hope to play more in the second half of the season.”

“I'm under contract with the club until 2020, and I see myself staying at Lyon until that date without a problem.” 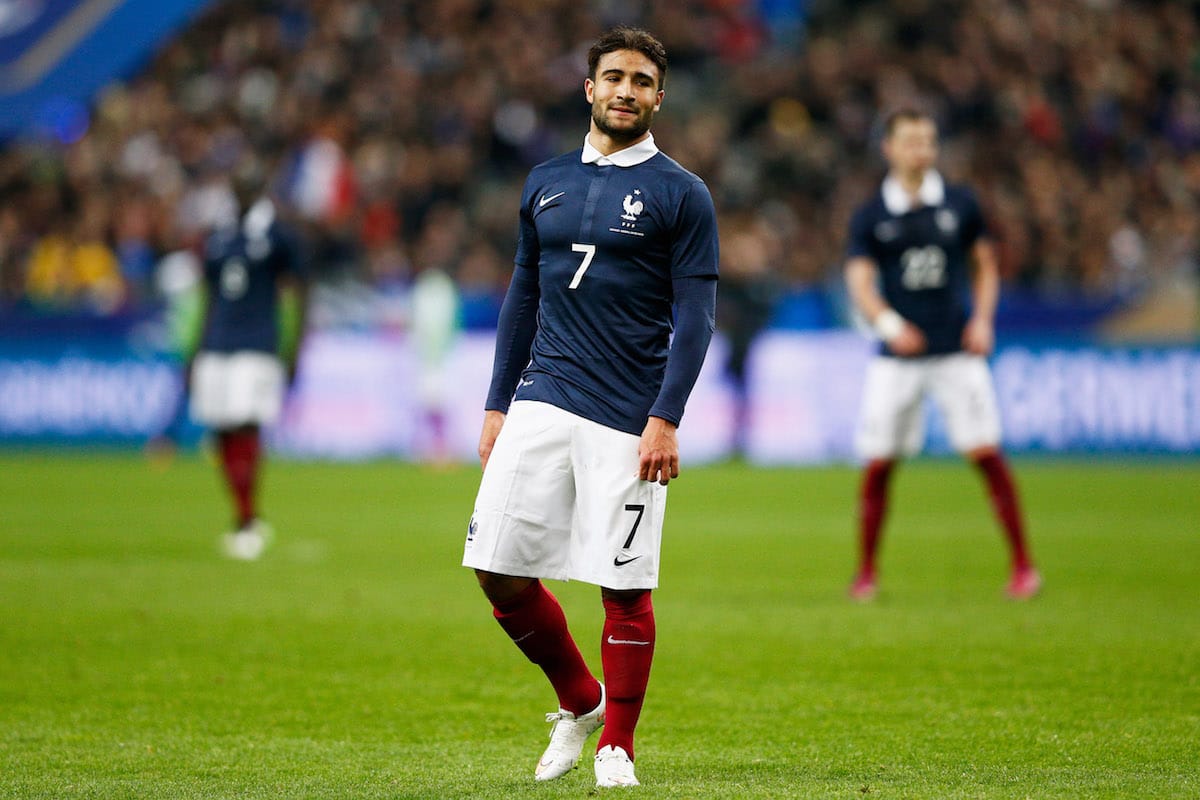 Playing against Roma in the Europa League, with the scores level at 2-2 in the first leg, Fekir was fed the ball on the edge of the box. With his first touch, he shifted to the right of the defence, turned to face the goal and fired his shot into the opposite corner.

It was everything we had wanted to see from the France international. Low centre of gravity, patience, close control and a superb ability to finish off either foot.

Since returning he has shown he’s still got the upper-body strength to hold off bigger defenders and retained his control and technical side, being able to dribble in and out of tight situations. But one thing seems to be missing: his burst of acceleration.

When playing in a front two Fekir – like against Roma – would come in possession facing off against larger, slower centre-backs. He could turn, run at them and, more often than not, either beat them or get brought down. He was a constant menace.

In the 4-3-3 that Bruno Genesio has favoured recently, Fekir has played wide to accommodate Memphis Depay and Lacazette. Even the coach recognises this does not play to the 23-year-old's strengths.

“He is very comfortable behind the attacker, so we will use it, but I think he does not want to play this position (on the flank), I can understand, and so he is not as powerful as we would like,” Genesio said.

“My role is to put him in the position where he will perform the best.”

Playing out of position at Lyon

For Fekir it may be a case of waiting until next season and trying to suggest a change of system back to a forward line that would see him as part of a two, or playing behind two forwards.

Then, and only then, will we know if the international has the power and speed in his legs to get back to the devastating form that made him one of Europe’s most sought after players in 2015.

However, the other side of the coin is that the club will know more than anyone else what level he is at. They see him at training every week and they will know what Fekir is capable of.

If they believe the injury has taken its toll they would be willing to listen to offers this summer.

After Lacazette admitted he would need to move on, Fekir was asked the same question by the press and although he tried to play it off. It’s obviously still on his mind.

“I'm not thinking about it now. We're a long way from the end of the season even if there are three months left,” he said.

“I’m not thinking about it at all,” he told RTL. “I like Spain. It's a league where they play good football. That's the league I prefer. After that, England and Germany are good. I like Italy a bit less.”

Spain would definitely suit his style of play and maybe if Atletico Madrid can’t lure his team-mate to the Spanish capital, they could turn their attention to Fekir.

Now, it is up to the forward to prove he is still worth the attention. But they may be more up to how Genesio plays him, rather than Fekir’s ability.