In terms of recent results, Arsenal fans may not know where to start when it comes to their defensive issues. However, left-back has been an ongoing problem and reports on Wednesday suggest that Arsene Wenger has found a potential upgrade for his squad this summer.

Valencia CF’s Jose Luis Gaya has been linked with a move to the Emirates and has led to many suggesting the French boss is not planning on leaving just yet.

It’s a position that Arsenal has struggled with and as Sam McGuire’s analysis showed, the Gunners are in desperate need for an upgrade.

Nacho Monreal is 31 in February and Kieran Gibbs only has 18 months left on his current deal. Both have failed to push on, especially compared to the talents of Hector Bellerin on the opposite flank. 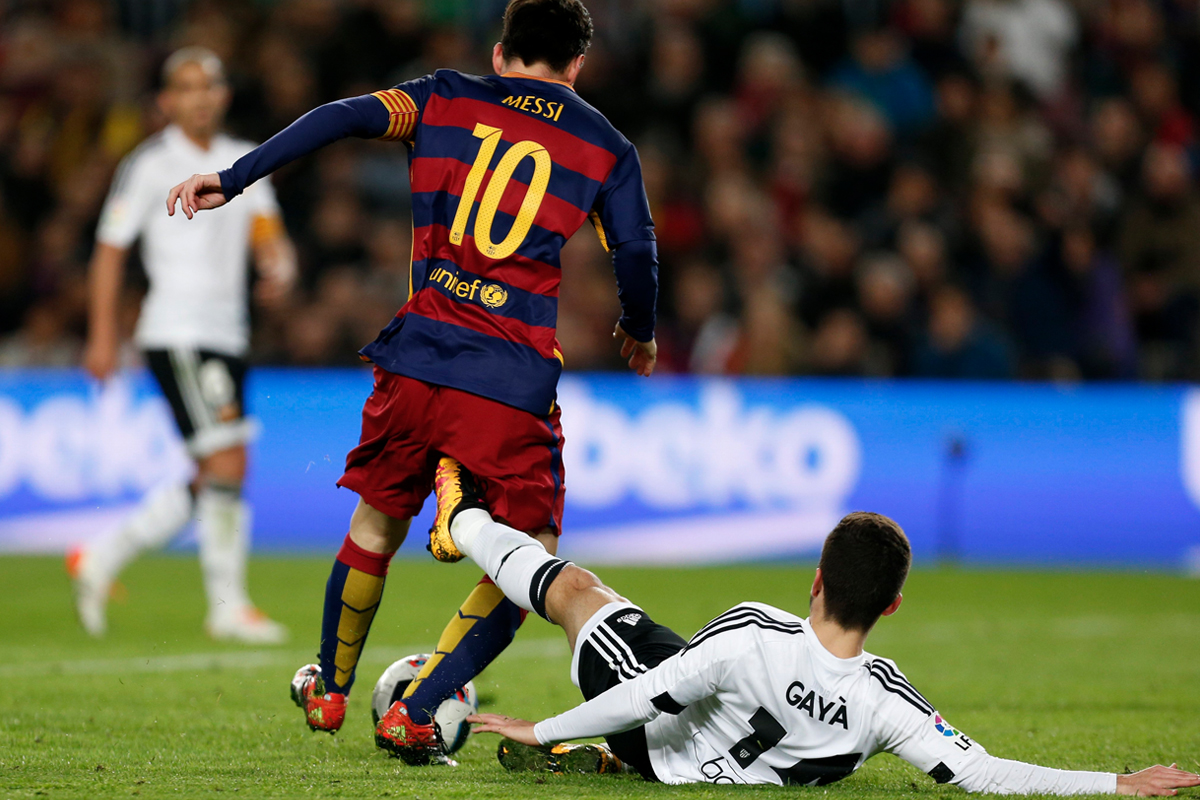 Gaya is a Spanish Under-21 international and signed a contract in 2015 that runs until 2020. The left-back has been part of the first-team squad since 2014 and quickly pushed himself into the first-team when Juan Bernat moved to Bayern Munich.

The 21-year-old has now played over 90 games for the senior squad and has started 10 of his 13 appearances this season, impressing in both the league and UEFA Champions League.

Far from one of the club’s top earners, the defender earns around £50,000 a week at the Spanish club, but with their ongoing financial issues, they will not baulk at a sizeable transfer fee.

How long until Jose Luis Gaya gets spoken about as the potential new Spain LB? Great talent. Restricted in system at times, but he flies.

However, the Under-21 international is unlikely to increase his wage massively, with Monreal, Gibbs and even Bellerin earning £65k, £60k and £50k respectively. Arsenal’s position may be weakened if Manchester City catch wind of the situation and Pep Guardiola looks to the Spaniard to solve his own left-back woes.

The Mirror failed to mention any sort of fee in regards to a summer move, but it’s hard to see the Spanish side accepting anything less than £20 million, regardless of their need to bring in funds.

He is represented by the same company that looks after Roberto Soldado and Paco Alcacer, both who have played for Valencia but made subsequent moves, although both are currently based in Spain. It's not an avenue Arsenal have taken in the past, but with the relative success of Monreal, Bellerin and even Sanchez, the Spanish market is one that the Gunners are growing into.

Going forward, Gaya is an excellent option. Playing in a 4-2-3-1 formation he often takes up the same position as a winger: bombing forward, looking to get wide and delivery crosses into the box.

This season, he is averaging 2.5 tackles per game, which is more than both Gibbs and Monreal, although the older Spaniard does make more clearances and interceptions, at 3.3 and 3.2 respectively. Yet, Gaya does get beaten less on the dribble than Monreal and attempts more crosses.

He plays on the front foot and doesn’t dwell on the ball when there is a chance to play the ball into a dangerous area. Taking one touch to get it out of his feet, then he’ll try and pick out a team-mate.

Although he got one assist against Estonia for the Spanish Under-21s recently, he could have easily had more. The finishing of the forwards let him down, not the quality of the passes.

For his club, he may not have any assists to his name this season, but he forced Alaves into an own goal and quite often it’s the last touch that stops the chance, not his ball. That’s the type of service both Olivier Giroud and Sanchez would dream of, and his lack of assists would certainly stop in a talented Arsenal attack. 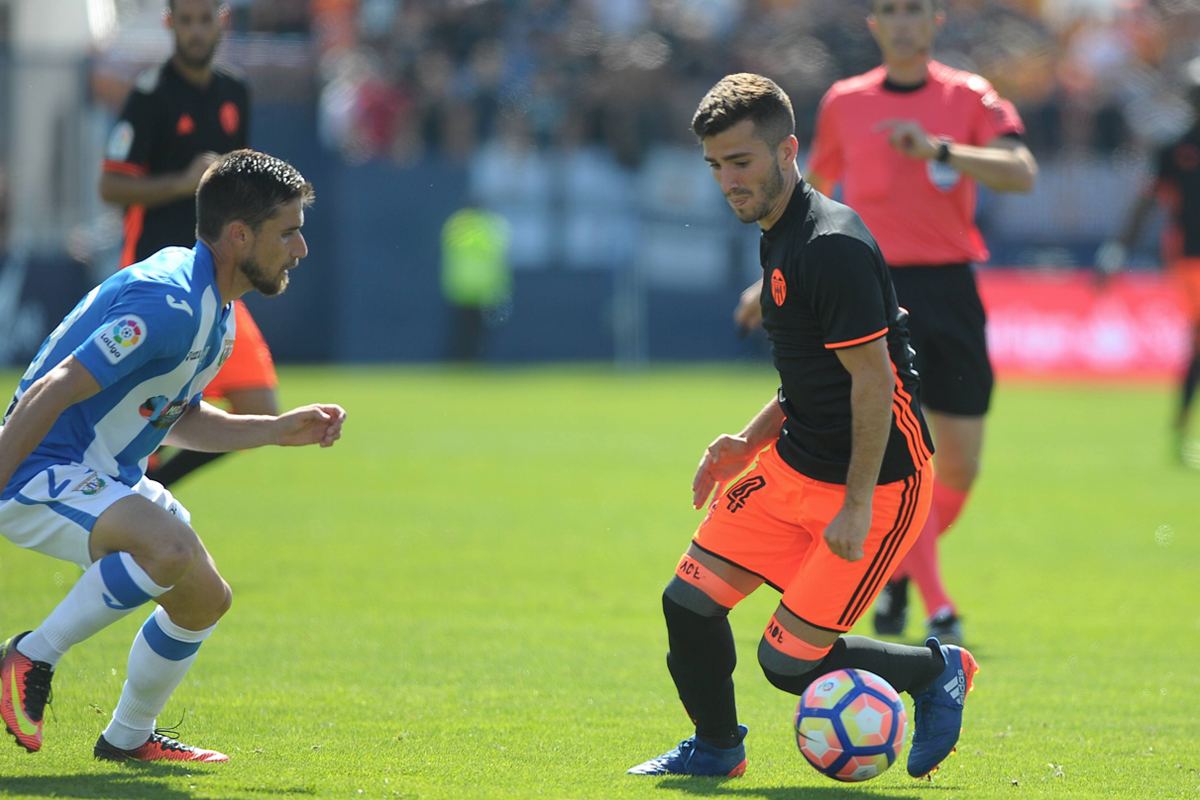 Gaya has shown great awareness and positivity in the final third. Against Las Palmas, he nearly scored from 40 yards, as playing with his head up, he tried to chip a lovely chipped shot over the goalkeeper, who got back to tip it over the crossbar.

The Spaniard is short, but he has a strong core and can hold off attackers, getting his body in the way to block runs and win the ball back. One issue for Wenger may be his size, as at just 172cm tall, he’s smaller than both Gibbs and Monreal and could become a weakness at the back post.

Ideally, he’d be a wonderful left wing-back playing 3-5-2, masking any of the defensive deficiencies that may deter Arsenal from making a move.

Far from the quickest player, he has good acceleration, but over long distances his overall speed can be lacking. Against Leganes, as you can see from the graphic below, right midfielder Omar starts behind Gaya (yellow) as the attack starts. 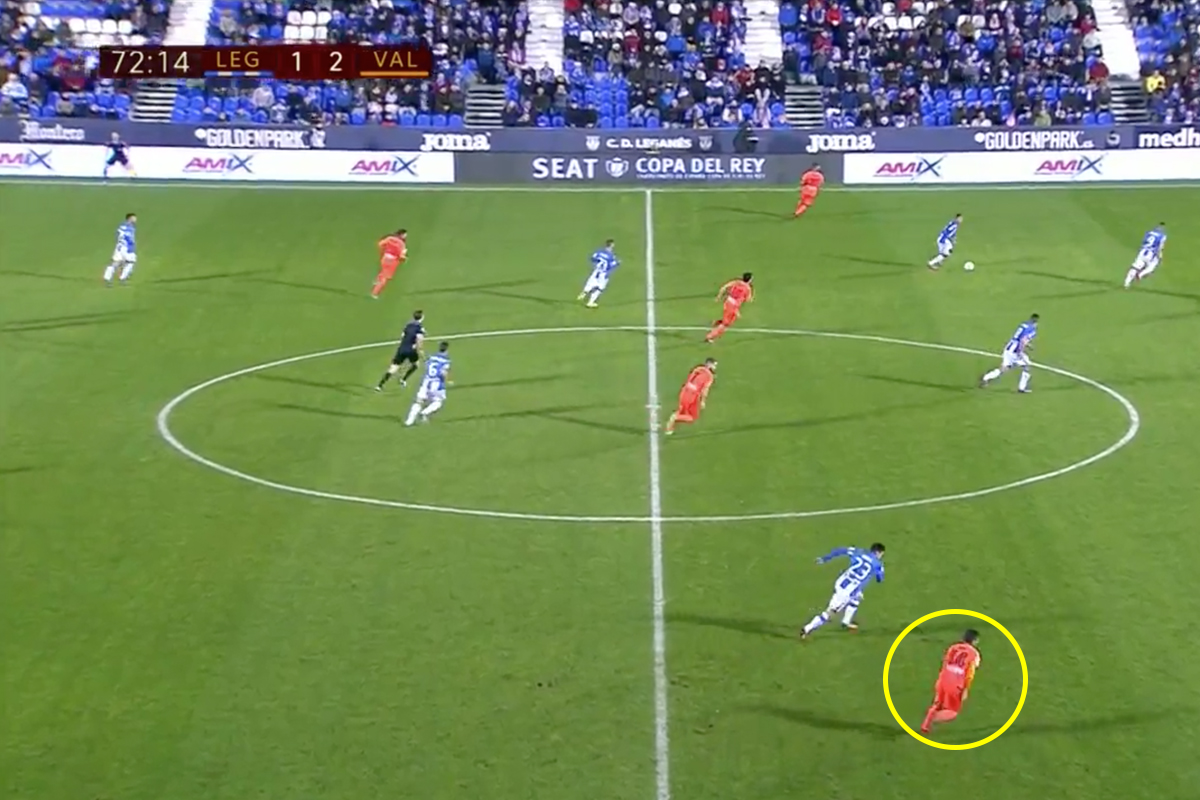 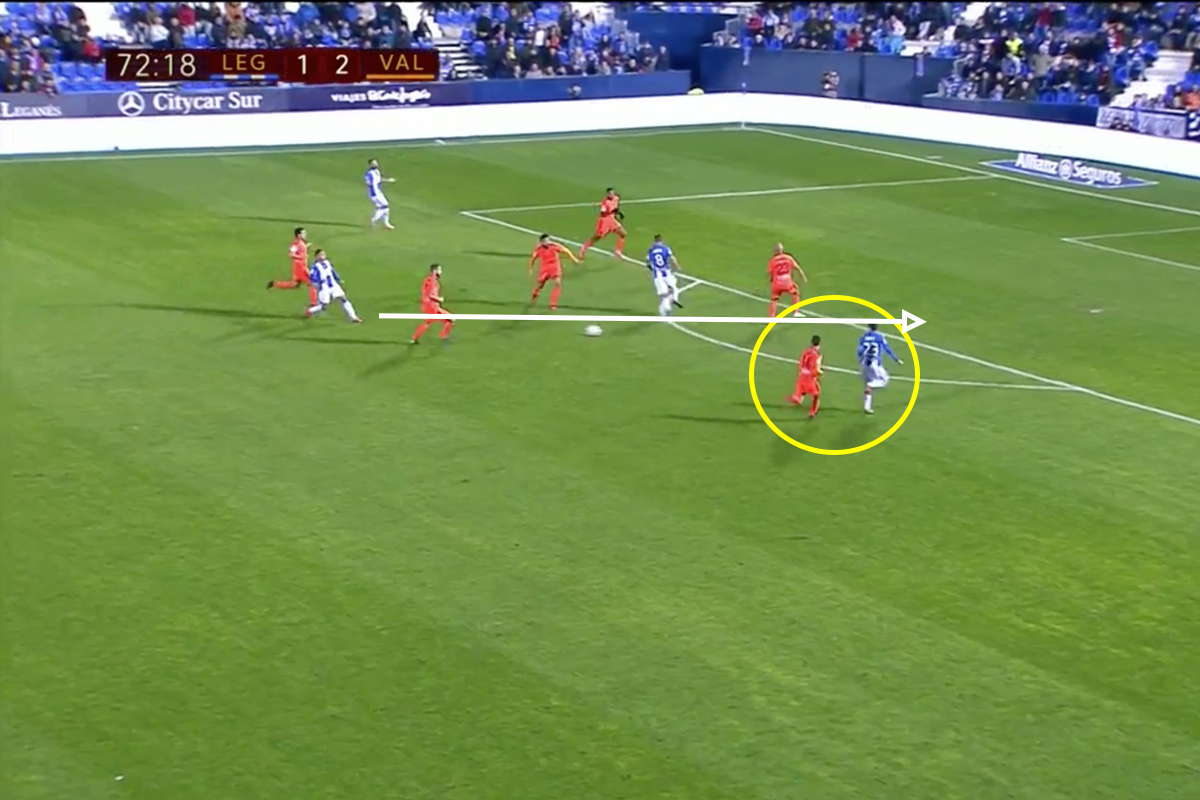 Yet, when they reach the edge of the box, Omar has made it past the left-back. Only a poor pass stopped Omar from having a shot on goal and a possible equaliser.

If he’s not quite got the pace to keep up with the fastest attackers, what he does do is have a good understanding of the game and how to read dangerous situations.

Playing against Levante, the away side are attacking down the left and Gaya (yellow) sees that there is a lack of cover through the middle. He has a lot of ground to make up, but does superbly to cover back. The final pass takes a deflection, but the left-back is there to mop up. 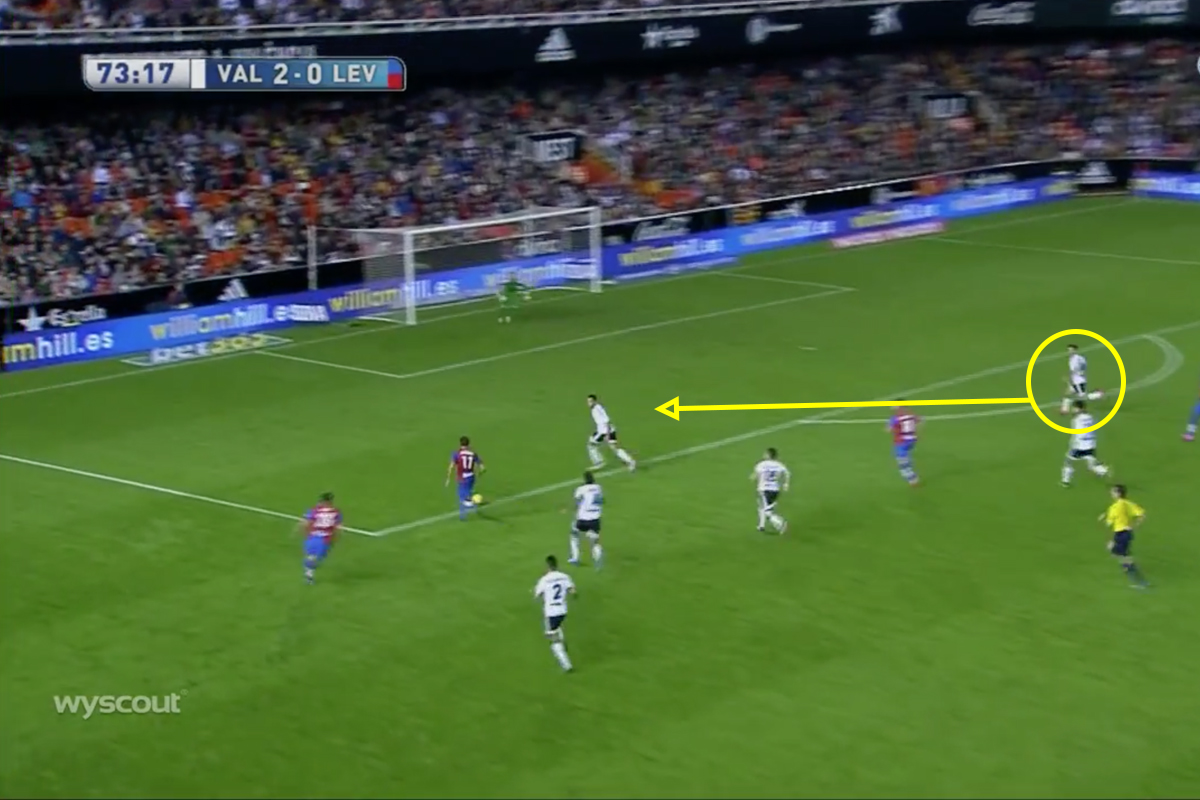 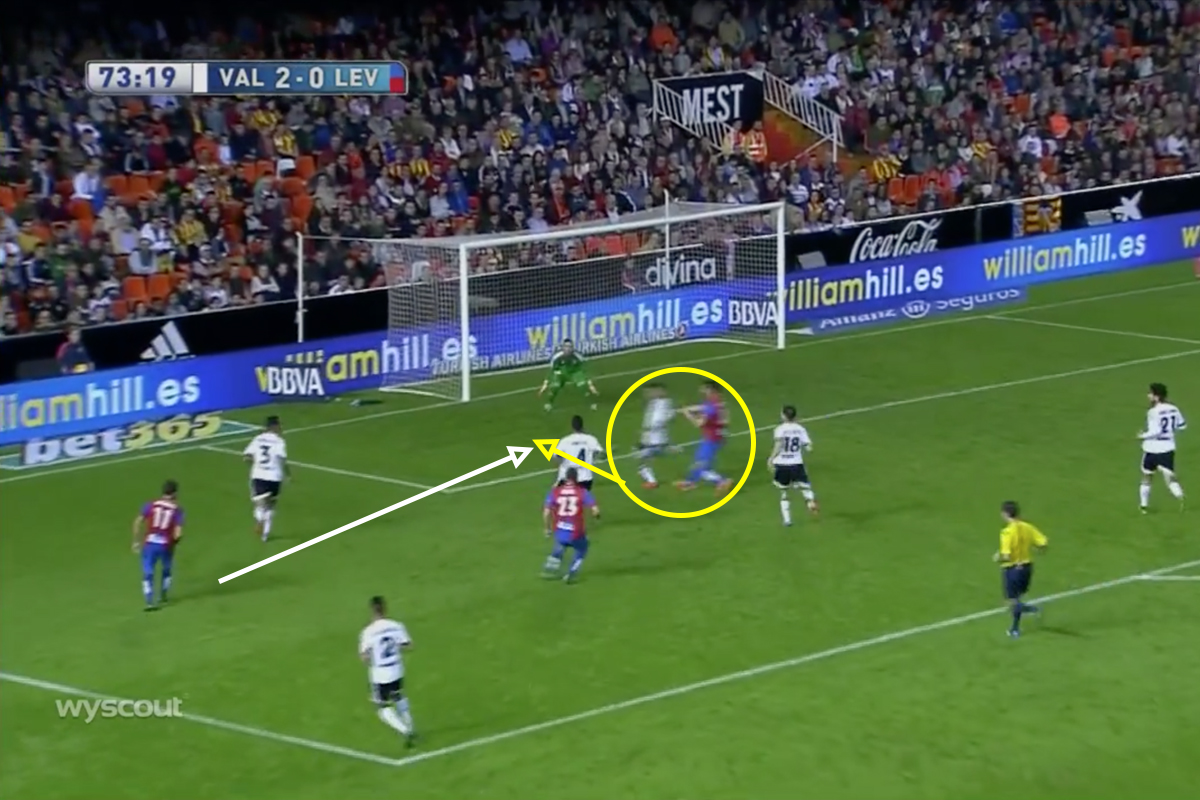 He often times his tackles well, only goes to ground when it’s needed and has the engine to both attack and defend in equal measure. Rarely does the Pedreguer native get turned, he stays big and uses his speed of thought and strength to stay in front, rather than panicking and diving in.

At his current level, it’s hard to see him as an instant upgrade on what Arsenal already have at the club.

But if Wenger is staying at the Emirates long-term, and the Gunners provide cover from the defensive midfield position, Gaya would be an excellent signing and a player that has a high ceiling to become a wonderful attacking full-back.