Losing your star player to direct rivals is always going to be viewed as a sign of weakness. Alexis Sánchez’s move from Arsenal to Manchester United was supposed to be the final nail in Arsène Wenger’s coffin.

Currently sixth in the Premier League table, the Gunners have lost their crown jewel, and many assumed this would ensure they played Europa League football for a second consecutive season.

However, with chaos comes opportunity. And Wenger spotted this. He was shrewd enough to have Henrikh Mkhitaryan involved in the deal which saw the club's No.7 move to Old Trafford.

The Armenian playmaker was under-utilised by José Mourinho. Though he was used to operating in a disciplined set-up, having played under Jürgen Klopp and Thomas Tuchel at the Westfalstadion, he was able to express himself in the final third, something he found difficult in Manchester.

Mkhitaryan was being handicapped by the system Mourinho was placing him in. It was just a poor fit for all parties involved.

Those unfamiliar with his time at Borussia Dortmund have labelled him a flop, but the Premier League hasn't felt the full force the 29-year-old just yet. And he's Wenger's wildcard heading into the final 14 games of the season.

The ace in the pack could be Pierre-Emerick Aubameyang. The Gunners wrapped up a club record £56million deal for the striker on deadline day. With Sánchez still at the club, Wenger would never have been able to bring in the prolific 28-year-old, but with him gone the opportunity presented itself.

Reuniting Mkhitaryan and Aubameyang could be a masterstroke. One to fire Arsenal back into the Champions League.

Wenger can continue with the 3-4-3 system he's used this season but the balance would be much better. With Mkhitaryan tucking inside from the left and Özil doing the same on the right, Arsenal have two of the best creators in world football behind arguably one of the best poachers in the game today.

On paper it's perfect and, unlike other dream partnerships, this has been tried and tested. Albeit in the Bundesliga.

Mkhitaryan initially struggled to find his rhythm but during the 2015/16 season fans finally got to witness why Liverpool battled it out with Dortmund for his signature.

Playing on the left of an attacking three, he registered 24 assists in all competitions, as well as scoring 23 goals – an unbelievable level of productivity for a player in his position.

Football Whispers‘ Ryan Baldi described Mkhitaryan as a ‘false-winger': he'd take up central positions and even get beyond Aubameyang at times. Granted, the Dortmund No.17's game has developed over the past few seasons and he's less likely to run the channels as he used to be. He's much more of a poacher, and this was detailed in a recent feature on the site.

It doesn't mean Mkhitaryan couldn't once again act as a false-winger from the left. Almost drifting into the second striker position like Mohamed Salah has done for Liverpool at times this season. Mkhitaryan isn't as prolific as the Egyptian attacker but it doesn't mean he can't be just as effective in that role.

His movement will cause issues and, with Özil pulling the strings behind them, the dynamic duo in attack could have a lot of fun. 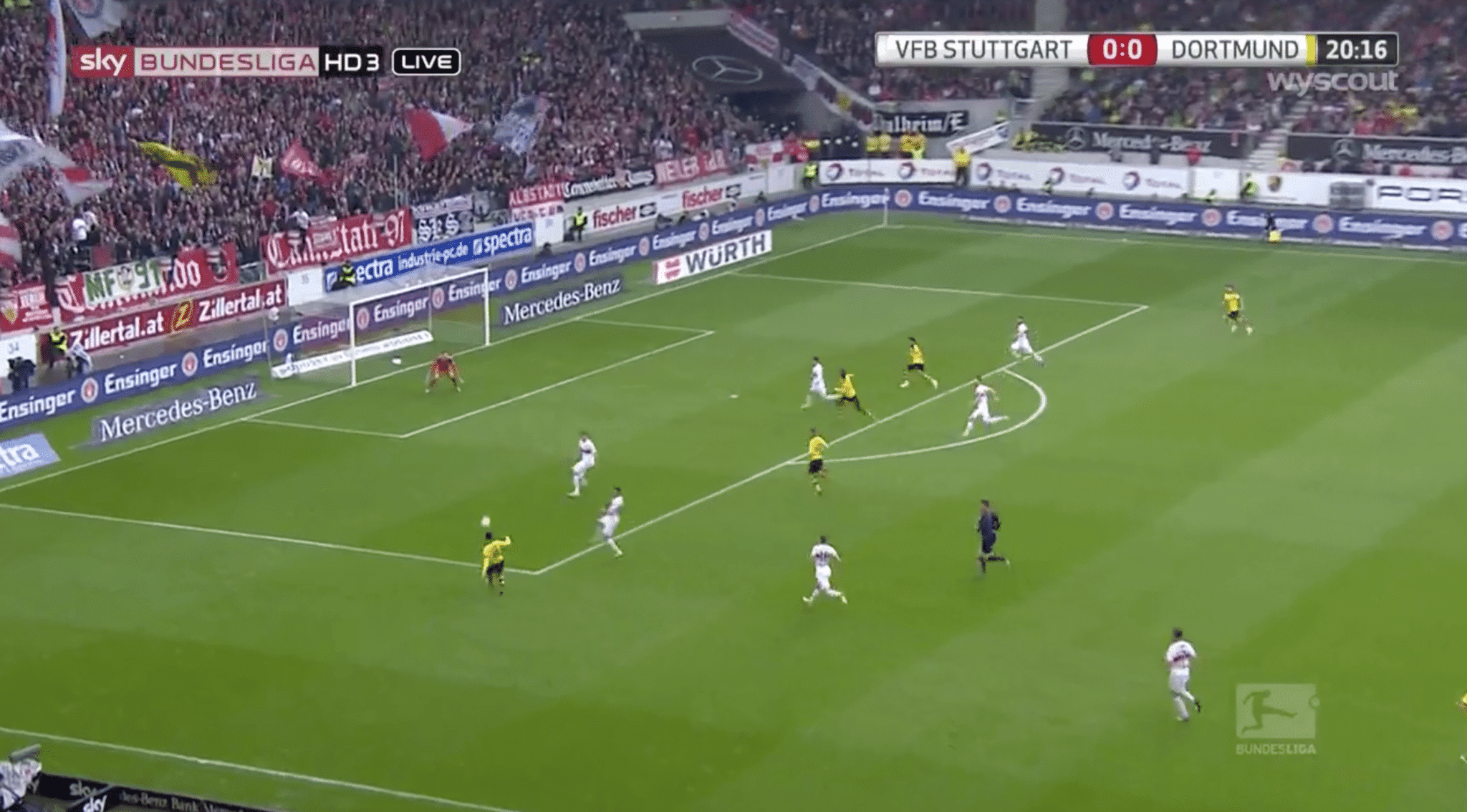 During his most productive season at Dortmund, Mkhitaryan did his best work running between centre-back and full-back. He'd often drag the centre-back into a wide area, as shown above, and then put the ball across the face of goal for a team-mate to score. He assisted six Aubameyang goals during that campaign, with the former AC Milan forward returning the favour on four occasions.

The new Robin to Aubameyang's Batman

Aubameyang is a very open comics fan and infamously donned a Batman mask last season to celebrate a goal against Schalke – with Marco Reus his sidekick in a Robin eye-mask. Mkhitaryan could be his new side-kick at the Emirates. There's already an understanding between the pair; after all, it's rare to see a forward assist the same player on six occasions during one season.

But when you actually break down the goals Mkhitaryan scored, it's easy to understand why he had so many to his name when playing alongside Aubameyang. They really were a dynamic duo. 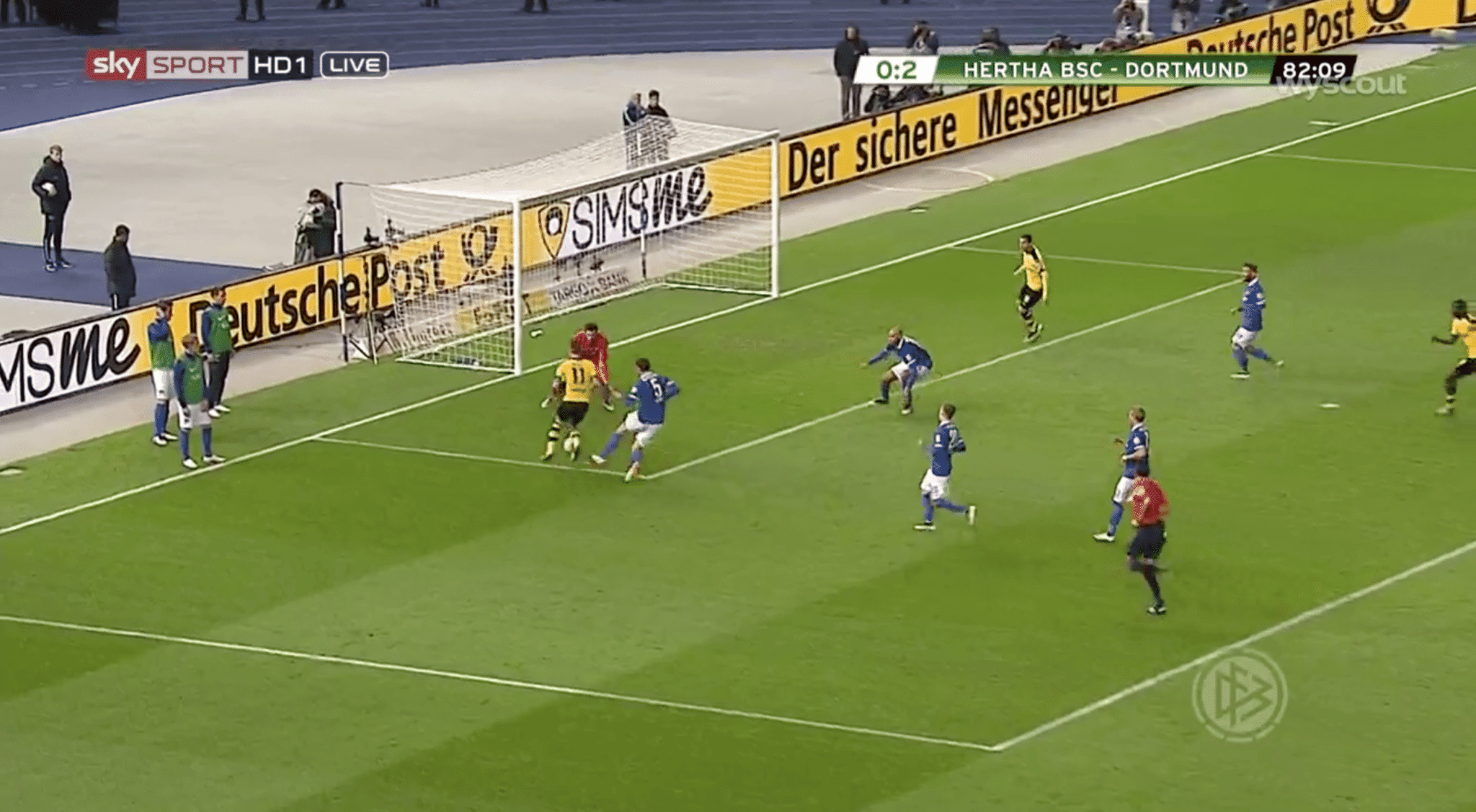 The striker's pace would stretch the opposition but it would be Mkhitaryan's intelligent movement which meant he was able to score a a number goals from in and around the six-yard area. You see just that in the picture above. Goals you wouldn't associate with a creator. He had a knack for being in the right place at the right time.

There's no reason this partnership couldn't yield the same results in the Premier League if they're given the same opportunities.

It could be the closest partnership to that of Dennis Bergkamp and Thierry Henry. A prolific speedster with superb technique backed up by a creative force of nature with a way to manipulate the ball like very few of his peers.

Arsenal are the fifth-highest scorers in the league and, of the top six, have conceded the most goals. Wenger tried to address the defensive issues but will not instead look to fire his way back into the top four. In their last season at Dortmund together, Mkhitaryan has an xG+xA90 (expected goals and expected assists per 90 combined) score of 0.95, while Aubameyang's was 1.26. For context, Sánchez's best while at Arsenal was 0.81.

Many will have you believe Arsenal are weak for selling the Chilean, but their reaction to doing so in such an opportunistic manner shows there's still life in Wenger yet. And the Gunners could be the dark horse for a place in the top four, even after the defeat to Swansea City on Tuesday evening.