Arsenal have only managed to win two Premier League games since the defeat to Manchester United at the Emirates Stadium. It's safe to say the Gunners have failed to convince when it really matters this term.

Arsène Wenger's side sit sixth, but are just four points off the top four, however, with Liverpool strengthening after signing Virgil van Dijk, the French boss may need to dip deep into his pockets.

With smart recruitment this winter, they could easily find themselves back in Champions League contention. One of the biggest areas of doubt, outside the defence, is the centre of midfield.

Granit Xhaka, hasn't fully convinced, even his biggest fans should have their doubts. Aaron Ramsey continues to tread water, you can roll a dice to see if he will perform or not. Adding a quality player to slot into the midfield, providing competition, could make a huge difference.

Steven N'Zonzi's future at Sevilla is up in the air. He was thought to be on his way out of the Spanish club, but their decision to sack Eduardo Berizzo and appoint Vincenzo Montella could change everything.

Linked as a West Ham United and Everton transfer target, Arsenal are thought to be favourites to land the French midfielder, if Sevilla are willing to sell and the Gunners match his £35million release clause.

Everton and Sam Allardyce ruled themselves out of the race this week, with the Gunners the favourites to land the former Stoke City midfielder.

There is little doubt he fits what Arsène Wenger is trying to do, when you see what N’Zonzi brings to the Spanish side, he would be a great fit at the Emirates and is the type of player they have been missing since Patrick Vieira left for Juventus in 2005.

Since N’Zonzi left Stoke for Spain, his game has evolved again, and perhaps more appreciated for his style in La Liga, Arsenal’s midfield is screaming out for a player like the 28-year-old. 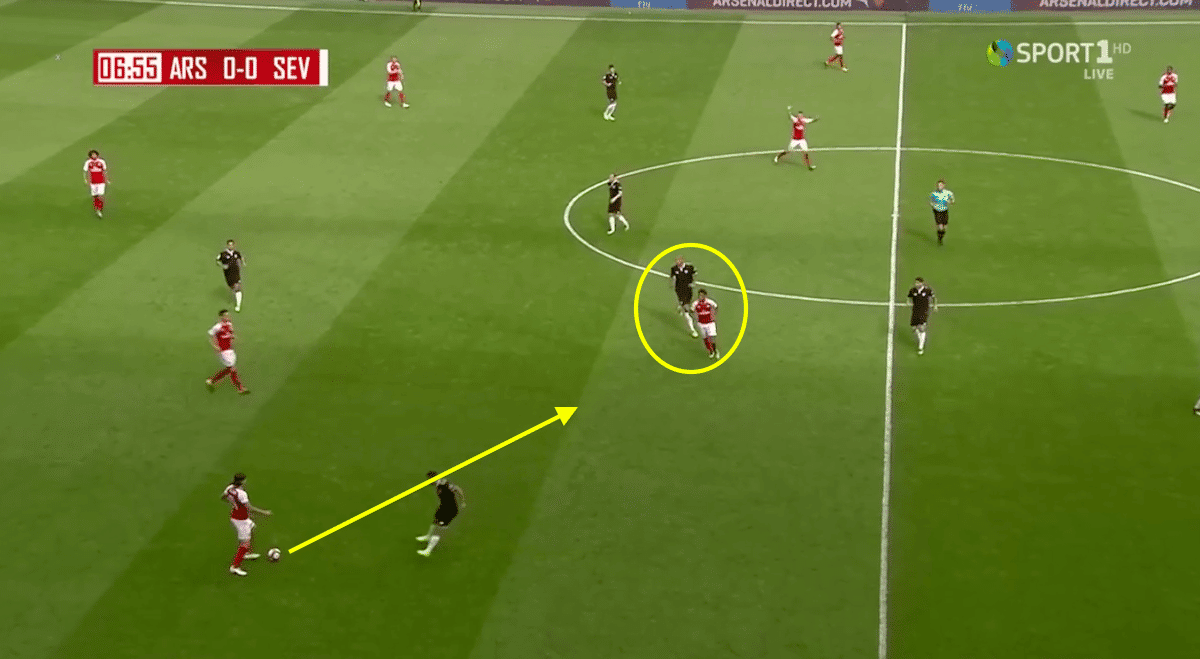 In the graphic above, Arsenal are in possession and Héctor Bellerín is looking for the easy pass inside. Although he looked non-fussed moments before, it’s N’Zonzi who is there to track the danger. 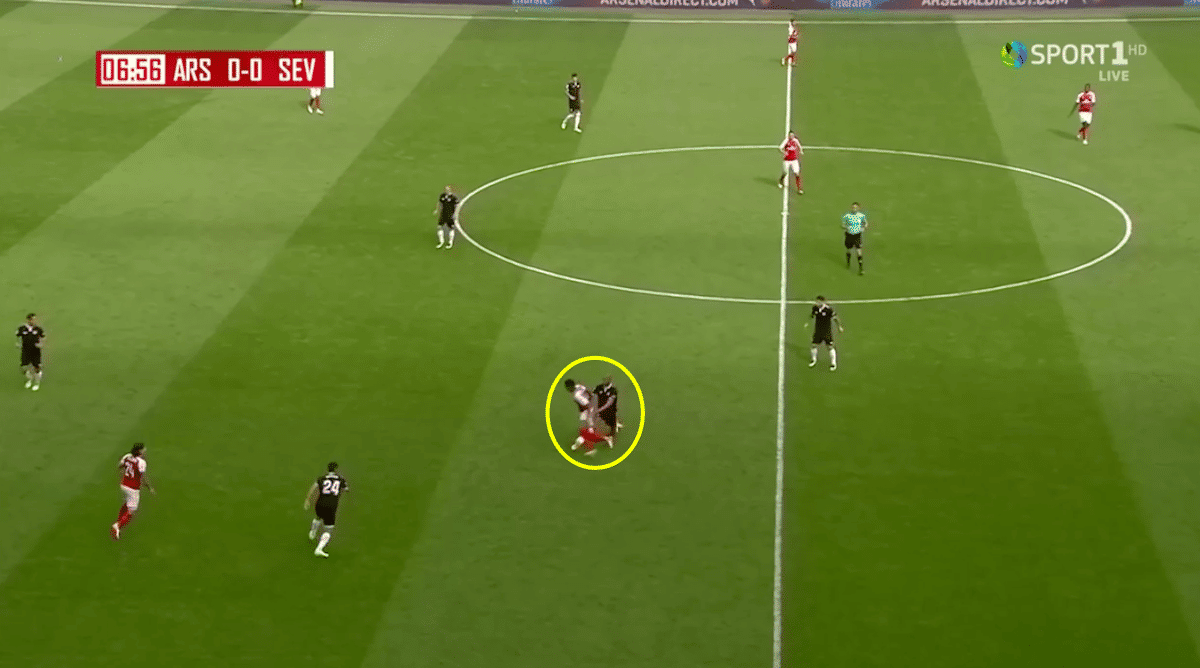 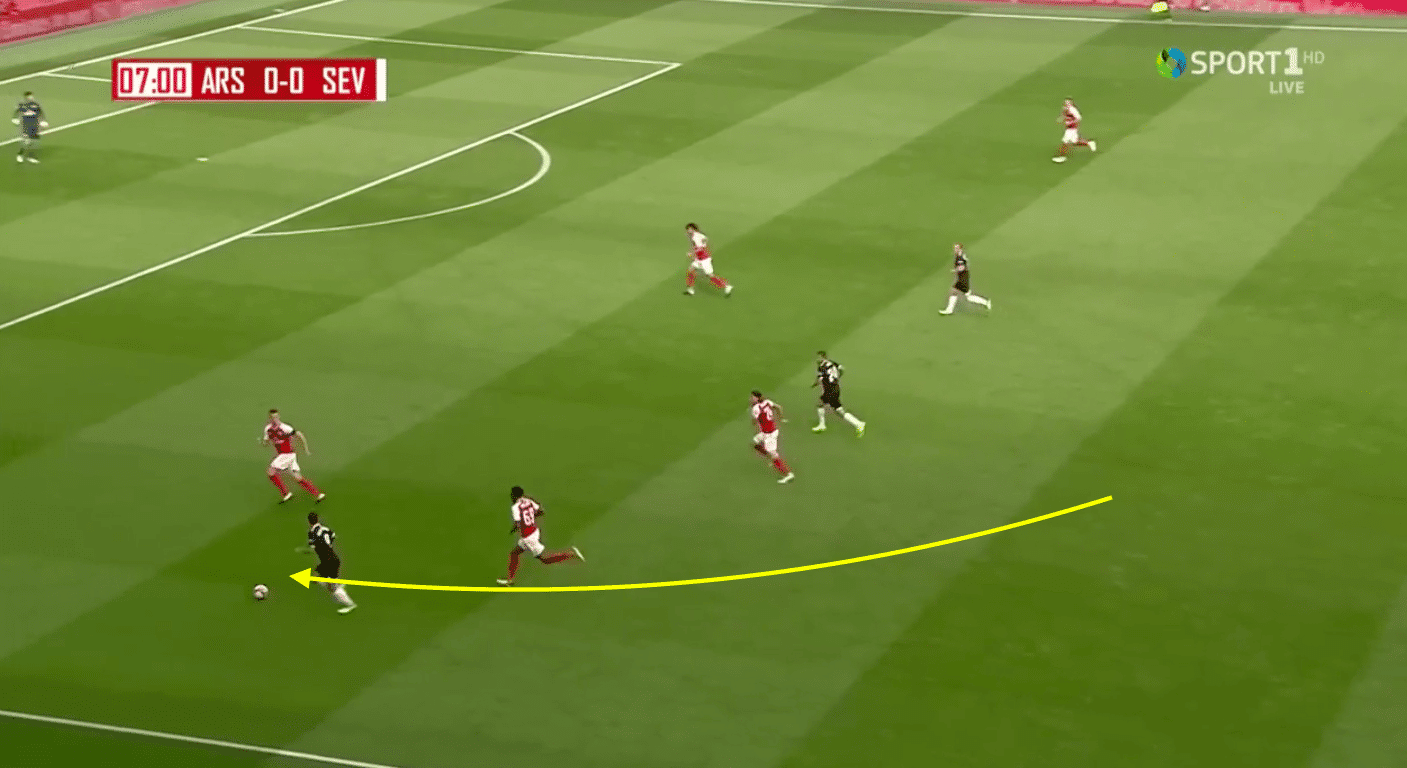 He gets his long legs in the way, wins enough of the battle that the Gunners lose possession and within seconds of the Frenchman making his move, he’s sparked a Sevilla attack.

Although he’s not a box-to-box midfielder is the same sense as Blaise Matuidi at Juventus, or how Frank Lampard made his career, he is a threat at both ends.

N’Zonzi is a two-way player, his stunning goal at the Emirates in pre-season showed the quality he possesses in both feet and he could strike up a stunning partnership in the middle of Wenger’s 3-4-3 formation.

He’s become a leader. He is the man who sets the tone and leads by example.

Just 15 minutes in against Arsenal, he was pointing out danger, he’s a talker. The Frenchman is constantly letting his team-mates know what’s going on. 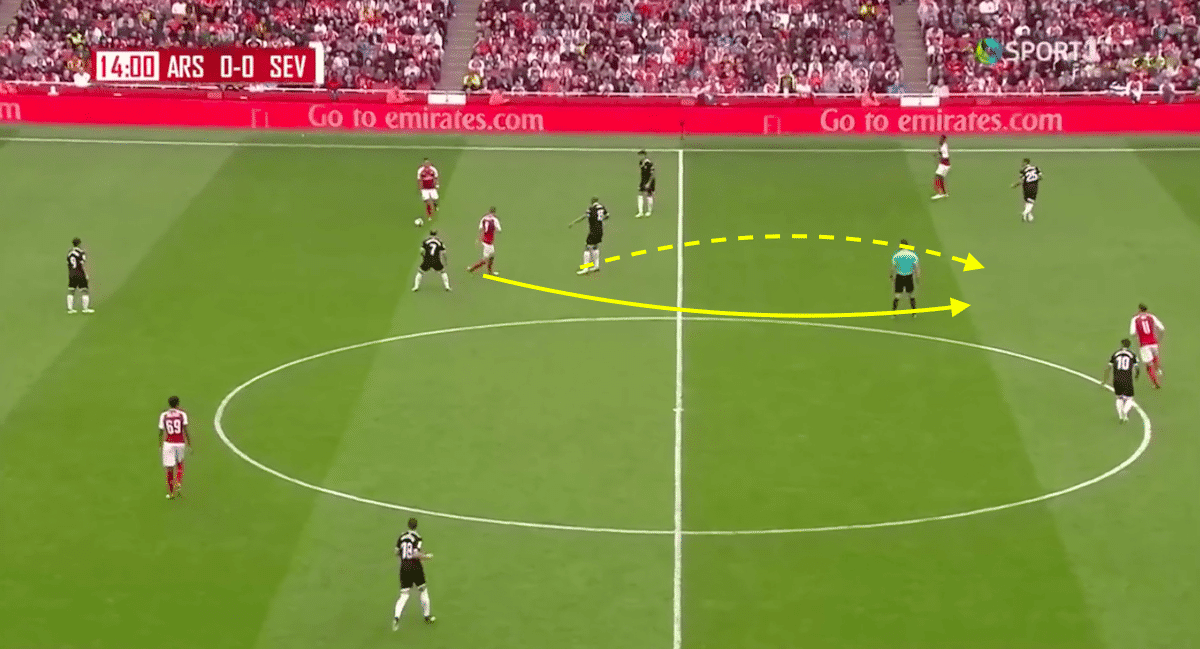 Then Aaron Ramsey tries to use his pace and get a jump on the former Stoke man. N’Zonzi is alert though, reacts fast, beats the Welshman to the punch and gets into a position to thwart the attack.

Once in control, he does what he does best, picks out a team-mate and Sevilla start an attack. 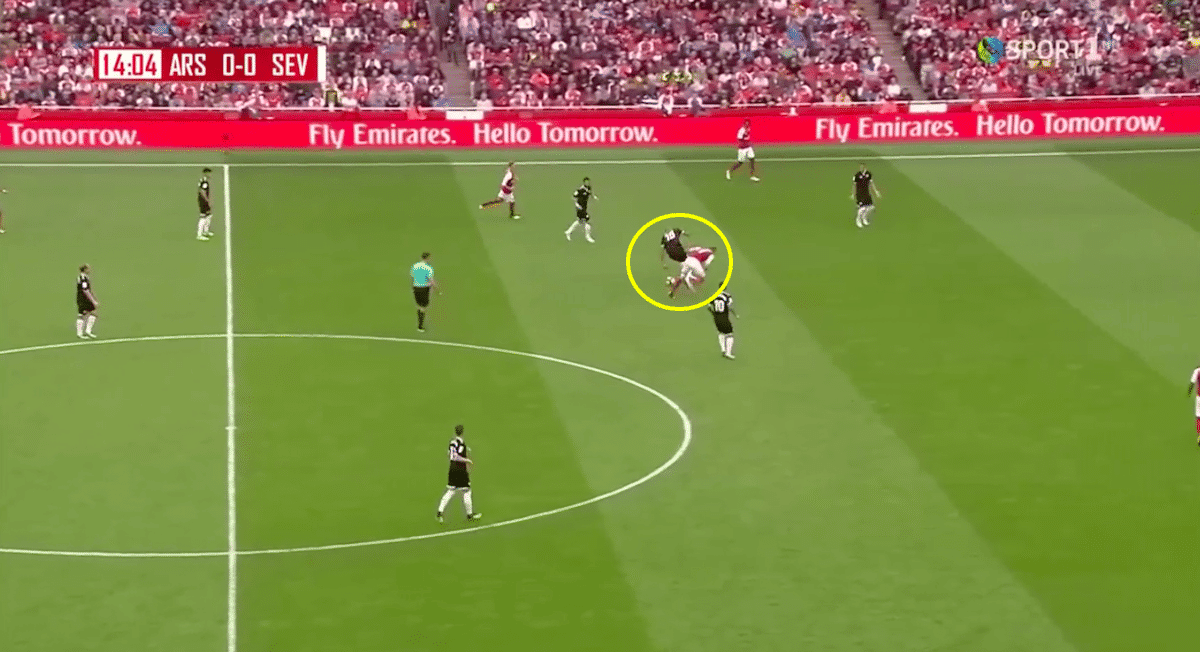 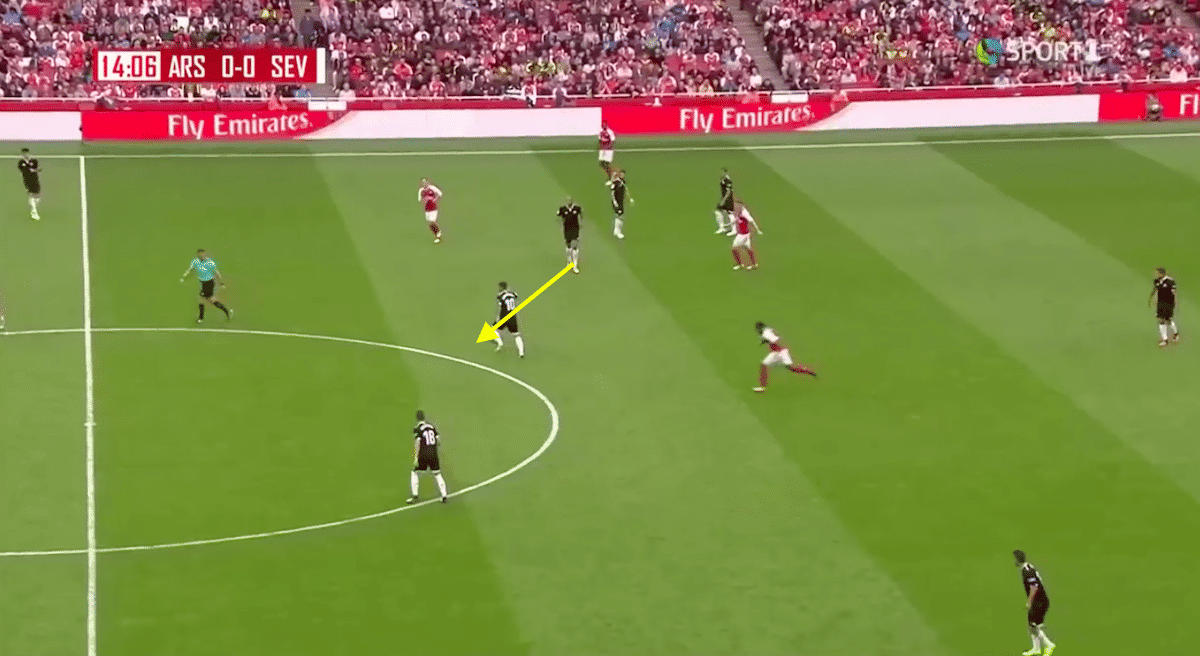 No-one in the Arsenal squad last season averaged more passes per game than the 28-year-old’s 82 per 90 minutes. Xhaka came closest with 71.8, and that’s in a team who like to keep possession, so he would have no problems fitting in with Wenger’s passing style.

The Swiss international attempted more tackles, at 4.3 to N’Zonzi’s 2.6, but he would be happy letting the former Borussia Mönchengladbach midfielder take the lead in that role.

He’s got the vision to slip balls through to Alexandre Lacazette, with the French striker great at running on to smart passes between full-back and centre-back.

Able to hit on rushing full-backs, he’d welcome the attacking players bombing ahead on both sides of the Gunner’s defence.

Jack Wilshere has yet to play enough minutes to convince Wenger he is a long-term option, and Mohamed Elneny and Francis Coquelin have been on the outside looking in for most of this campaign.

N'Zonzi has already spent plenty of time in England, so almost comes Premier League ready, despite his years away. You are getting a better, more confident player than when he left and with how he plays and what he does, there’s no need to worry about his age.

Even though it was just a friendly, with 10 minutes to go, he was still shielding the defence, telling team-mates where they should be and altering them of the threat.

N’Zonzi would be the perfect leader in the middle of the park, dictating tempo, protecting the back three and generally controlling the game.

Arsenal have missed someone in that mould for so long. If Wenger has any feelings towards his countryman, he really should act on it come January.

He would be a solid purchase for most Premier League teams, but Arsenal is the team he could really improve and perhaps become the missing piece in Wenger’s puzzle.