Mikel Arteta’s start to life as manager of Arsenal is showing signs of promise.

Though results aren’t sending shockwaves across Europe, performances have been much improved. Of the five games the former Manchester City assistant has been in charge for, two have ended in victories for the Gunners. A hard-fought 1-0 FA Cup win over Leeds United was, perhaps, undeserved but a win all the same. Meanwhile, a dominant display against Manchester United ensured Arteta picked up his first three points in the Premier League.

Draws against Bournemouth and Crystal Palace, along with a defeat in the match against Chelsea, complete the first set of five for the Spanish tactician. There’s a clear style now at play and the use of Nicolas Pépé and Mesut Özil is encouraging.

In theory, a front four made up of Pépé, Özil, Pierre-Emerick Aubameyang and Alexandre Lacazette is exciting. In practice, there are a number of kinks, as Arteta is finding out.

The Gunners have scored in all five of their games but a return of six isn’t what many envisaged.

Pépé is back amongst the goals and Aubameyang continues to deliver. But Lacazette has failed to add to his tally for more than a month. He’s being used as the focal point of the attack but not to his strengths. The Frenchman is closing down opponents and generally being a nuisance. But his threat is deteriorating. 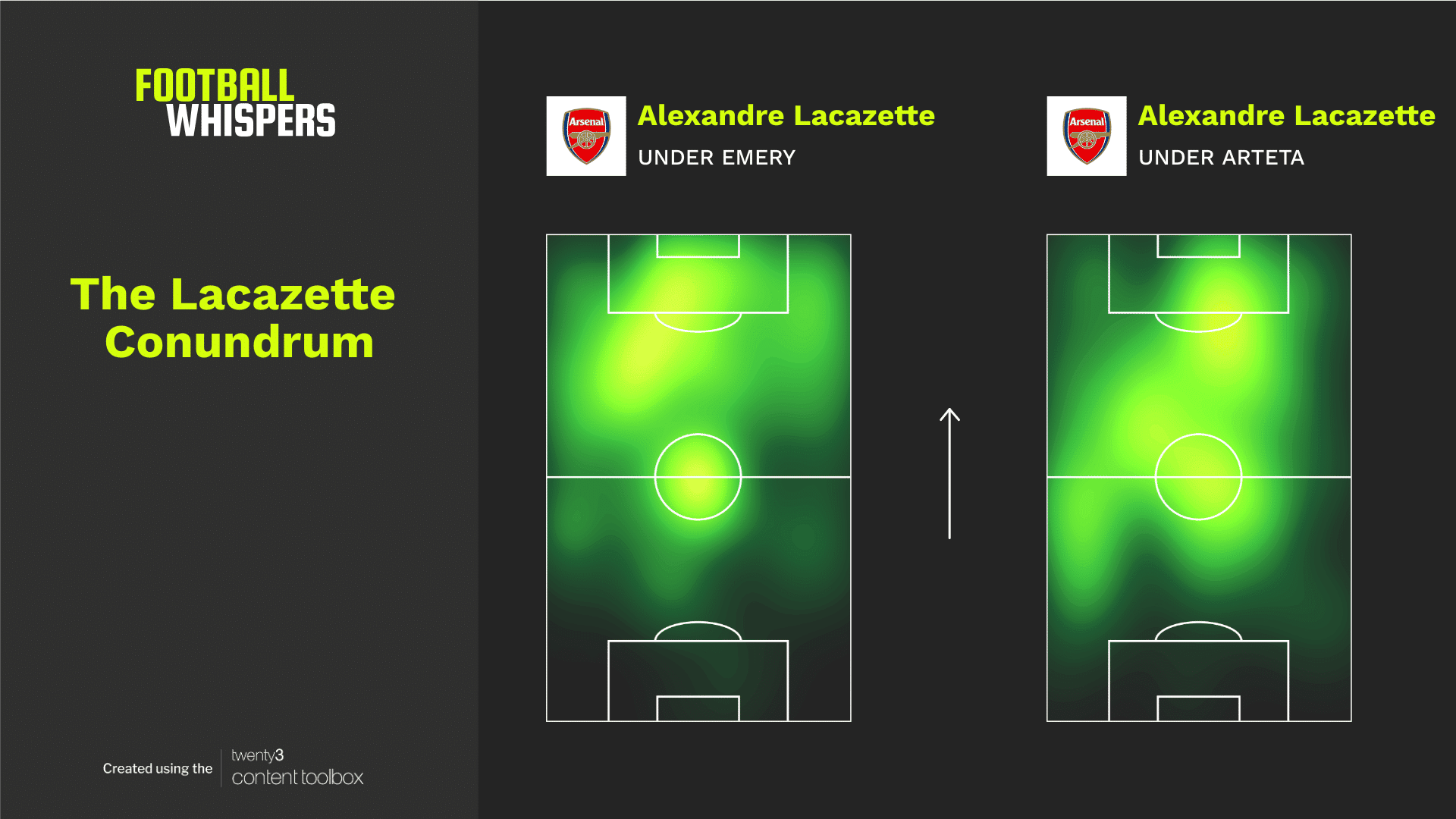 With reports suggesting Atlético Madrid are keen on adding him to their ranks if a move for Edinson Cavani fails, Arsenal could soon be fielding offers for their No.9. And they may decide to cash in on the former Lyon forward.

For context, since Arteta's appointment, Lacazette is averaging fewer shots, fewer passes, fewer touches and fewer touches in the opposition’s box. The 28-year-old has also stopped adding value to his efforts. In fact, his post-shot expected goals average is now worse than his expected goals (xG) average meaning there is some poor finishing at play.

With Arsenal now generally moving Lacazette away from goal, perhaps bringing in someone better suited to that role makes more sense. As things stand, Arteta is nullifying one of the most potent strikers in Europe with the way he’s using him.

In his final three seasons with OL, Lacazette averaged 25 Ligue 1 goals. Since the switch to the Emirates, he’s finished with 14 and 13 in the Premier League while chipping in with 12 further assists.

Before Arteta’s arrival, Arsenal's No.9 had five goals in 677 minutes in the English top-flight. He’s failed to add to that tally in the 351 minutes since. Lacazette was averaging a goal every 135 minutes and a goal involvement every 112 minutes. Under the new boss, his goal involvement has risen to one every 351 minutes.

His shots are down from 3.51 to 2.3 and touches in the penalty area are down by two on a per-90 basis. It is as though he’s being deployed in the facilitator role, similar to the one Roberto Firmino operates in for Liverpool. While the Brazilian creates for others, Lacazette’s expected assists numbers remain the same, pre and post Arteta’s arrival – 0.07 per 90.

His shot assists have risen, slightly, from 1.46 to 1.53 but the difference is minimal and doesn’t make up for other key metrics decreasing. Lacazette isn't being shoehorned into the side – it is clear Arteta feels he can play that role in the meantime – but it is a marriage of convenience right now.

If Arsenal are to flourish, they need key cogs in vital areas and that could mean there's no room for the Frenchman in the starting XI. He's better than a squad option and the Gunners could fund a number of moves with the money recouped from parting ways with him. A January move is unlikely but a summer one could well be on the cards.