April 25th, 2004. Arsenal’s fans had been anticipating the day for weeks – months, even.

At first it had just been a thought, a possibility. Soon, though, it became clear that it could happen: Arsenal could win the league at White Hart Lane. With a solitary point they would be crowned Premier League champions against their fiercest rivals.

The Gunners, backed by a boisterous and jubilant away following, came into the North London derby knowing the title was already sealed. Chelsea, their closest challengers, had lost at Newcastle earlier that day. Any pressure on Arsenal was relieved. Except it wasn’t. They wanted to finish the job in the most satisfying way imaginable.

The sun was out in north London as thousands of fans thronged outside the ground. The feeling of excitement, from the visiting supporters at least, was palpable. For Tottenham, with four games of the campaign remaining, the focus was on securing points to ensure they did not slip towards the bottom three. And, of course, there was a determination to deny Arsenal the title, to be the first team to beat them in the league that season.

“Going there in 2004, the players knew what they had to do,” Arsenal’s then assistant manager, Pat Rice, told Amy Lawrence in her book Invincible. “We knew Chelsea were at Newcastle, and that they were playing early, but we knew we had to do our job.

“We had to get the players focused – not that they needed it – because news of what was happening at Newcastle was coming over all the time. You could feel it in the crowd as well. As far as getting the players to concentrate on the game, I don’t think there was any trouble there.”

The players needed to remain composed, too, amidst the noise and hostility generated by the home fans. There had been rumours they might applaud Arsenal should they be confirmed as champions at full time. But that was never going to happen. There was only animosity, fury and vitriol. If there was any respect, it was unspoken and begrudging.

This Arsenal team, though, were rarely overawed. Arsène Wenger’s powerful, disciplined and supremely confident side were nothing short of consummate professionals. They had no intention of capitulating on the biggest stage.

An uncompromising midfield duo of Patrick Vieira and Gilberto Silva had expertly marshalled the division’s meanest defence all season, and they would do the same at White Hart Lane. In the back four, Kolo Touré and Sol Campbell – who was the focus of much of the Spurs fans’ scorn on his return to the club – were typically resolute. And in attack, Thierry Henry and Dennis Bergkamp combined, as ever, with intelligence and fluidity.

It was Arsenal’s front two who linked up to create the game’s first goal. A Tottenham corner dropped to Henry, who galloped forward, gliding easily past white shirts until he was in the opposition’s half. The Frenchman slid the ball into the path of Bergkamp, whose ball across goal was met by the long right leg of Vieira. An eruption of noise came from the away end, and Arsenal, within three minutes, led. 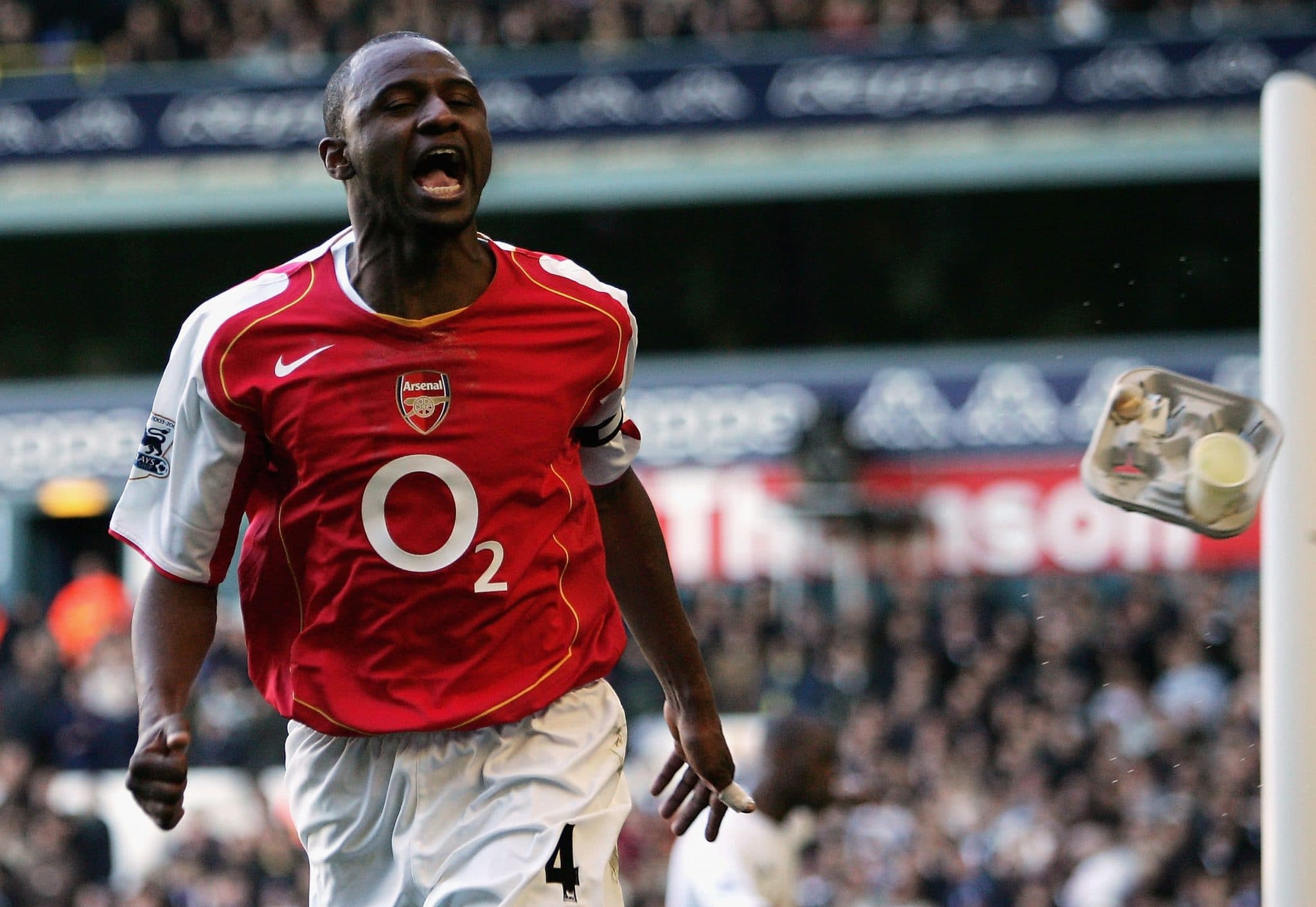 “This is one of my favourite goals,” Vieira later said. “I really loved that. It’s got to go down as one of the best days of my career – it was just fantastic.”

For Arsenal fans, it would soon get even better. They were dominant, playing with the swagger and assurance of champions, dominating possession and keeping Tottenham at arm’s length. And half an hour later, following another swift and beautifully constructed attack, it was 2-0. Bergkamp was again involved, threading a pass into the path of Vieira, who pulled back for Robert Pires to stroke into the bottom corner with his left foot.

“What you’re seeing here is what we’ve seen all season,” said Martin Tyler in his commentary. “The sheer class of Arsenal.”

Around White Hart Lane, the realisation began to set in. The only noise came from the away end, while Tottenham’s supporters sat in gloomy silence. Their side were being well beaten by the best team in the country.

No one expected this Arsenal team, so disciplined and defensively stingy, to squander a two-goal lead. But that is what they did after the break. First Jamie Redknapp slammed a shot from the edge of the box into the bottom corner. Then Robbie Keane scored a late penalty to level things after Jens Lehmann had brought him down.

Any disappointment in surrendering their lead was wiped away at the final whistle, though. For the second time – it had happened in 1971 too – Arsenal had won the league at White Hart Lane.

“I want every Arsenal fan to make sure they really enjoy this moment,” a beaming Wenger said. 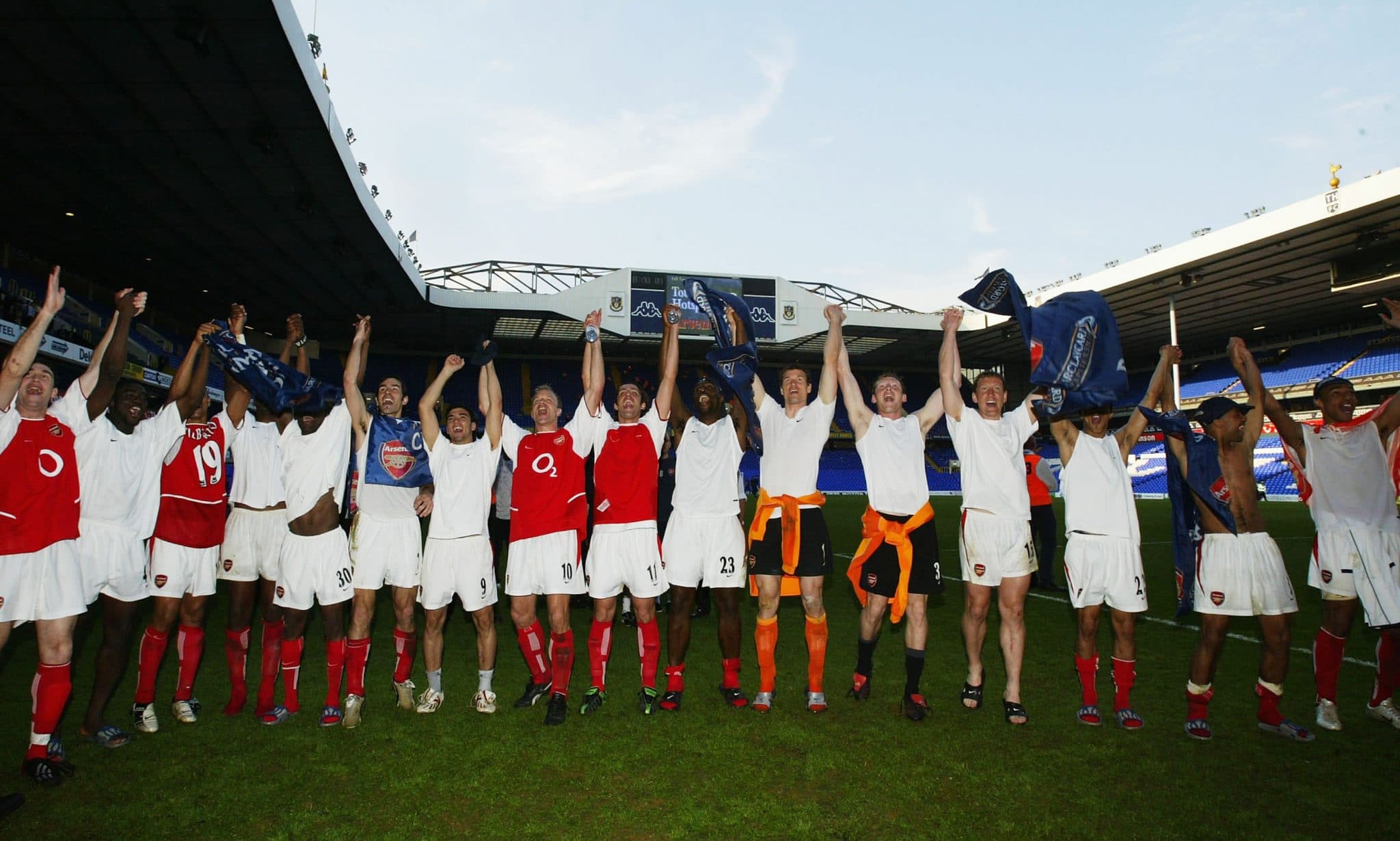 There was a feeling, then, as Arsenal’s players gathered in the corner where the travelling fans celebrated, that this team would go on to dominate, that they would set the bar for seasons to come. It felt like the start of something. Instead, it proved to be the zenith of Wenger’s Arsenal career.

The club’s last Premier League title seems a long time ago now – 15 years this month – but it has been made more special, more memorable by Arsenal’s struggles to reach those heights ever since. For the Invincibles, success was ephemeral. The memories of that remarkable team, though, have not faded.

Perhaps the enduring image of Wenger, in the years to come, will be his celebrations at White Hart Lane, both arms raised aloft in triumph, drinking in the adulation of Arsenal’s fans. In the background, a white banner is draped over the stand, emblazoned, in red, with the words: ‘Arsene Knows’.