Arsenal head into their game against reigning Premier League champions Leicester City with an unfamiliar sense of optimism.

The Gunners' form had been awful since the turn of the year. They crashed out of the Champions League in the last-16, losing 10-2 to Bayern Munich on aggregate, and have slipped down to seventh in the top flight.

But Arsene Wenger's switch to a 3-4-2-1 system has seemingly reinvigorated his players.

Playing in the new system, they overcame Middlesbrough in their last league outing before sealing a place in the FA Cup final with a 2-1 win in extra time over Manchester City at Wembley on Sunday.

Such has been the improvement in performance since the change of formation, Wenger is likely to continue with a back three against Leicester.

With Shkodran Mustafi a major doubt for the game, the back three that started the win over City – Gabriel, Laurent Koscielny and Rob Holding – should retain their places in the side in front of goalkeeper Petr Cech.

While none of the defensive trio have blistering pace, they aren't slow either which could be vital in containing the threat of Jamie Vardy.

Alex Oxlade-Chamberlain has been played out of position at right wing-back since the formation change but has been Arsenal's stand-out performer over the last two matches. He should retain his place.

Nacho Monreal is the obvious candidate to start on the opposite flank while Aaron Ramsey and Granit Xhaka complement each other well in the centre of midfield.

Mesut Ozil and Alexis Sanchez will keep their places as roaming number tens but it's up top where Wenger is likely to make a switch. 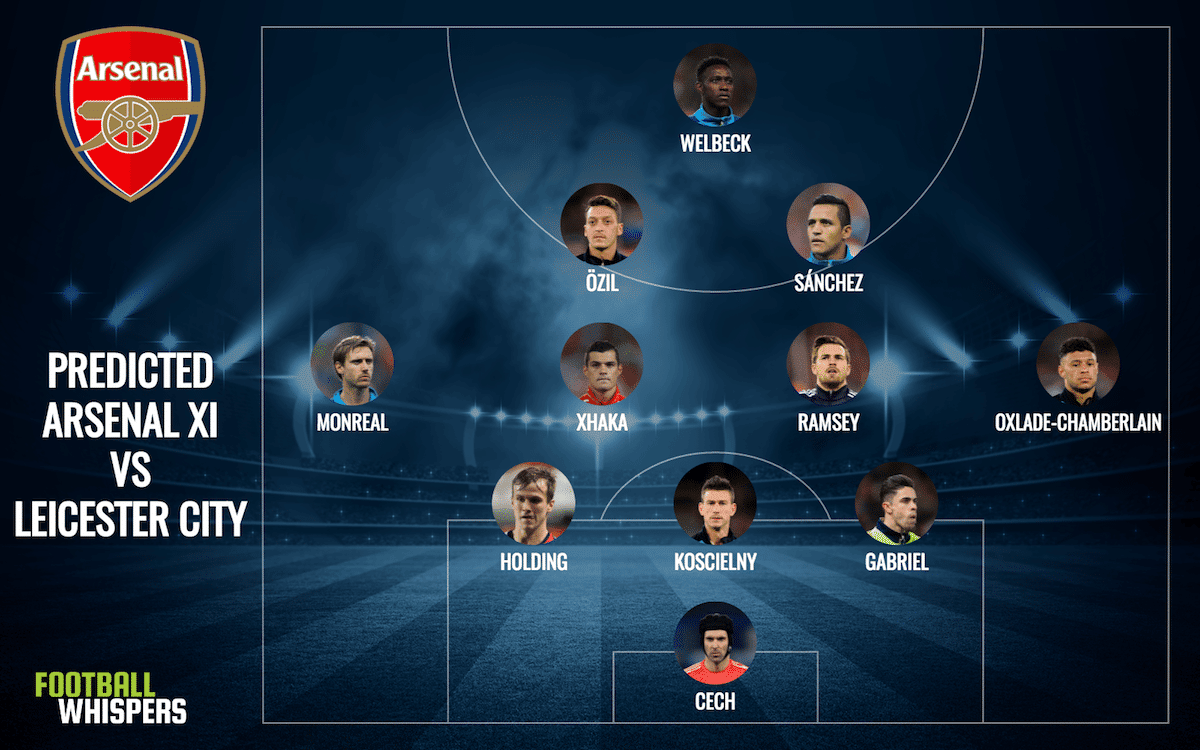 READ MORE: ARSENE WENGER'S BACK THREE COULD GO DOWN IN FOLKLORE

The England striker's pace would stretch the Leicester defence. Wes Morgan is out due to injury but Robert Huth is likely to return to the Foxes starting XI.

The German is a physical centre-back but isn't quick. Starting Welbeck would force the Leicester defence to drop deeper, or risk the 26-year-old breaking in behind their backline.

Given Arsenal's fading chances of climbing back into the top four, their clash with Leicester is a game the Gunners must win. Wenger will need to pick his side wisely.

Do you agree with our starting XI? Fill out your predictive team above and share it with us on Twitter.