On Saturday, playing against a determined Hull City, Arsenal may have won, but all eyes were on the abysmal performance of Mesut Özil.

In 22 Premier League appearances, the 28-year-old has five goals and five assists, but he hasn’t scored in 2017 and since the Gunners beat Stoke City 3-1 at the Emirates.

An assist against West Bromwich Albion and Burnley isn’t good enough for the £42million German, especially if he wants to push for a new lucrative contract.

It says a lot that the weekend’s display from Özil was perhaps his worse for the club, not that they’ve had a shortage of poor performances to choose from.

“I am very, very happy at Arsenal and have let the club know that I would be ready to sign a new contract,” Ozil told German football magazine Kicker in January.

“The fans want that I stay and now it is just down to the club. The club knows that I am here most of all because of Arsène Wenger. “

“He is the one who signed me and he is the one whose trust I have. The club also knows that I want to be clear what the manager is going to [in the future].”

Arsenal now might want their own reassurances from the German international, but Arsène Wenger might not give the former Werder Bremen midfielder the chance to prove his worth against Bayern Munich on Wednesday.

After facing the German giants at the same stage in 2013 and 2014, plus the 5-1 humiliation the Gunners suffered last season, Arsenal fans can understandably be a little annoyed that after finishing top of their group, they were handed such a tough draw in the last 16.

Carlo Ancelotti’s team are unbeaten in their last 12 fixtures, conceding just five, scoring 28 times. No matter who Wenger picks, they need all 11 players to be at their best this week, they cannot afford to harbour any passengers. That’s exactly what Özil has been of late, a spectator. It was just clearer to see on Saturday.

Arsenal needed a controversial handball goal from Sanchez and a late penalty to win 2-0, that will not be good enough against the Germans. 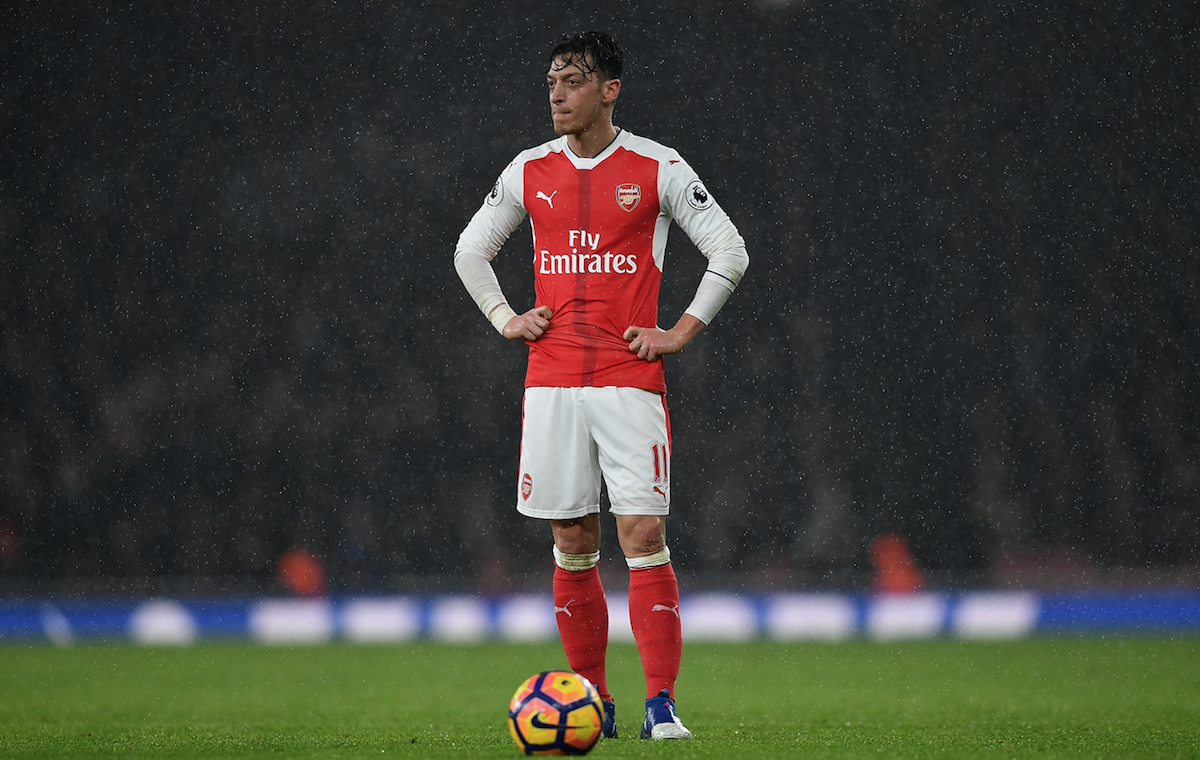 Özil looked sluggish and out of sorts. Time and time again, the German slowed down the Arsenal attack, or picked the wrong option.

Early in the first half, after a Hull City corner, the ball broke to the former Real Madrid playmaker. With acres of space in front of him, he laboured. 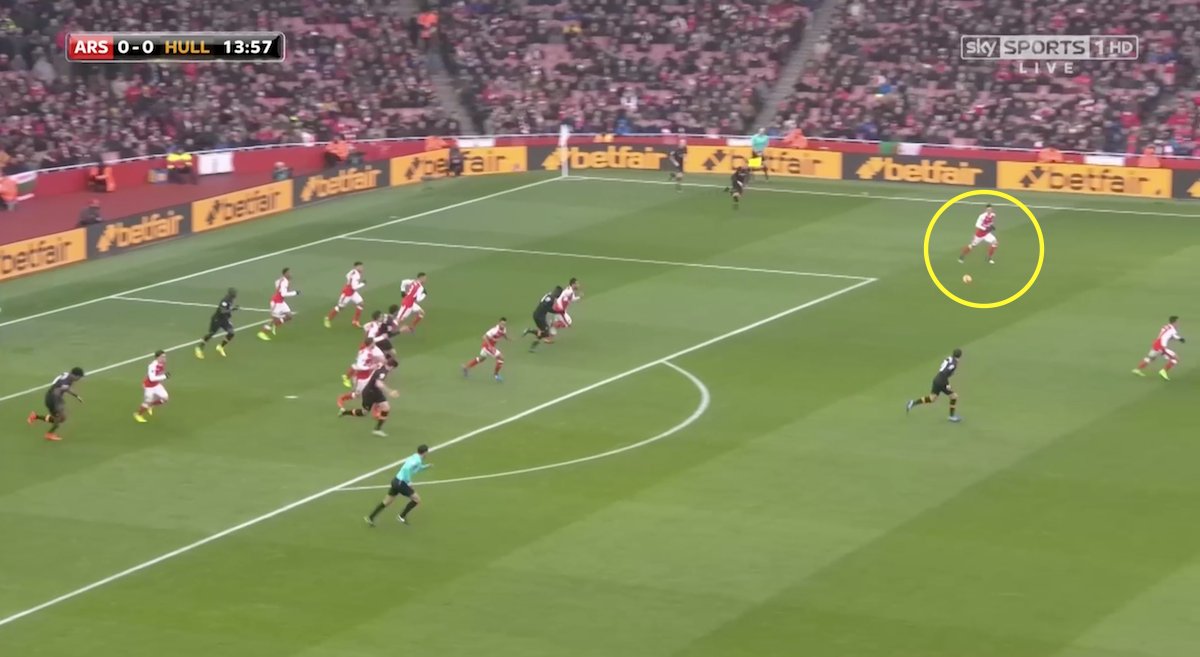 As you can see from the graphic below, the visitors defence are pushing back into their own half, giving Özil room to attack. 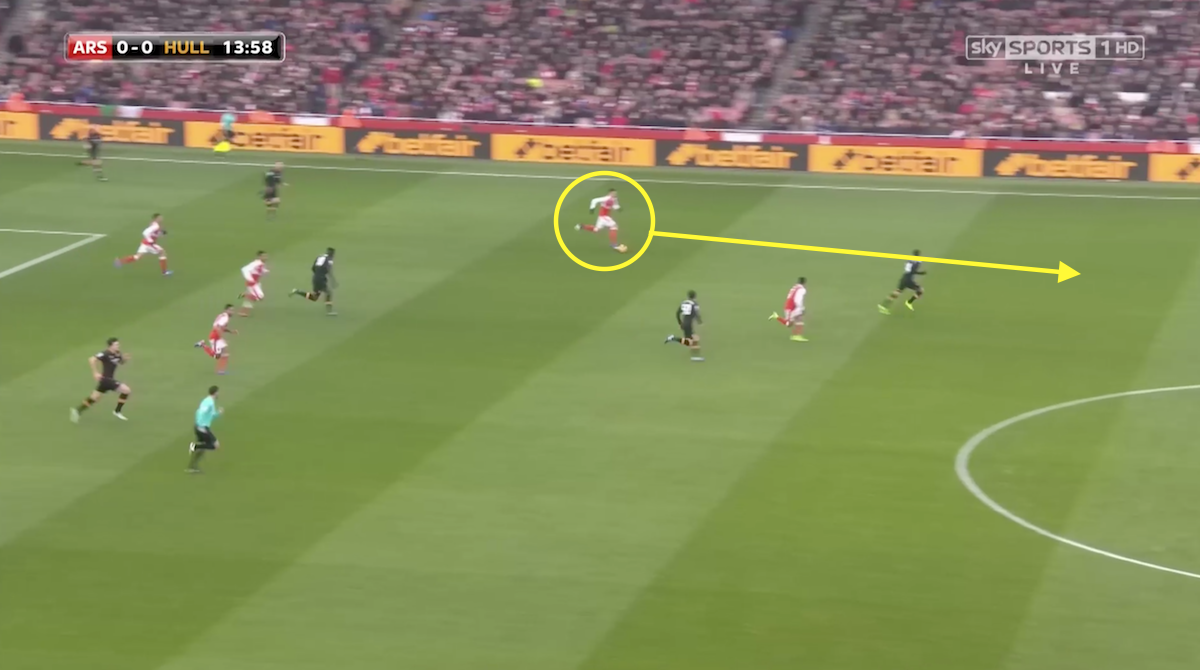 However, rather than having the confidence to break forward, the German pauses, looks for the obvious pass inside and Lazar Markovic intercepts the poor decision. 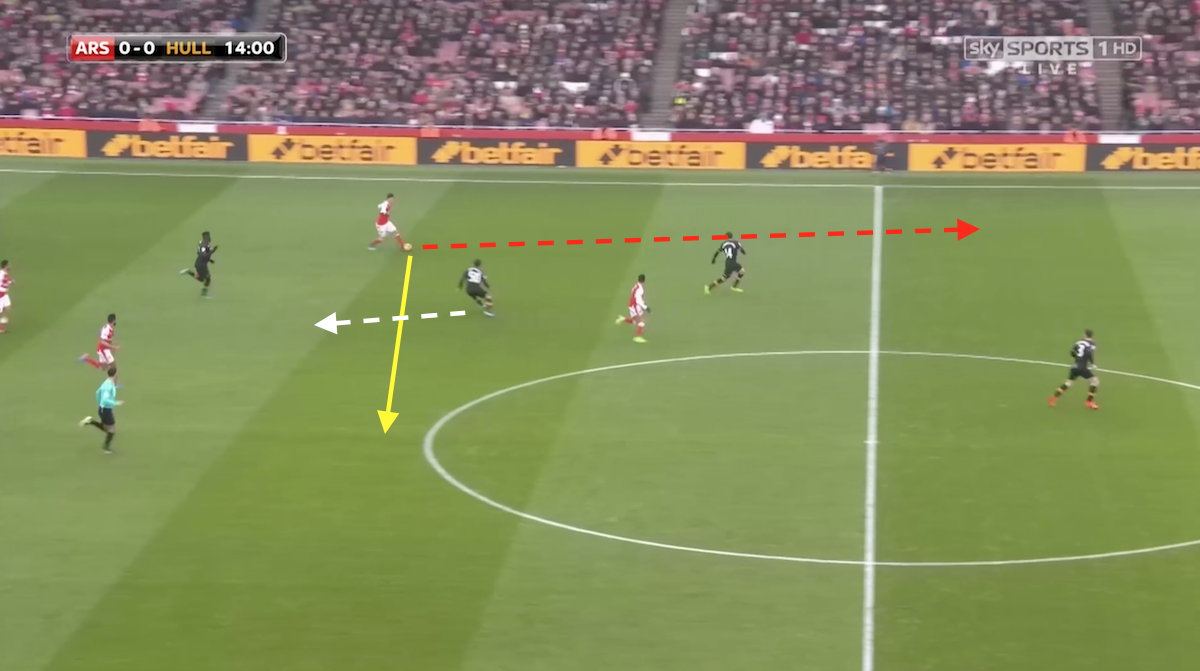 The Gunners had won the ball back and gotten down the left-flank. Sanchez cut the ball back to Özil, and although Theo Walcott was the only option in the box, he had two players waiting on the edge. 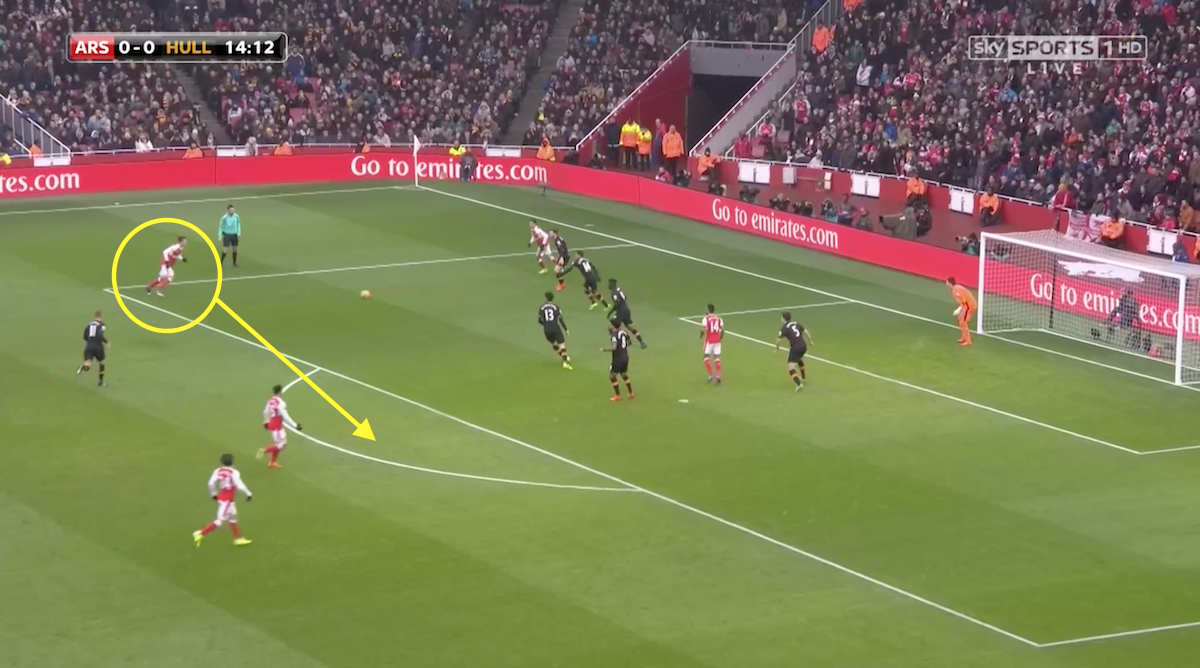 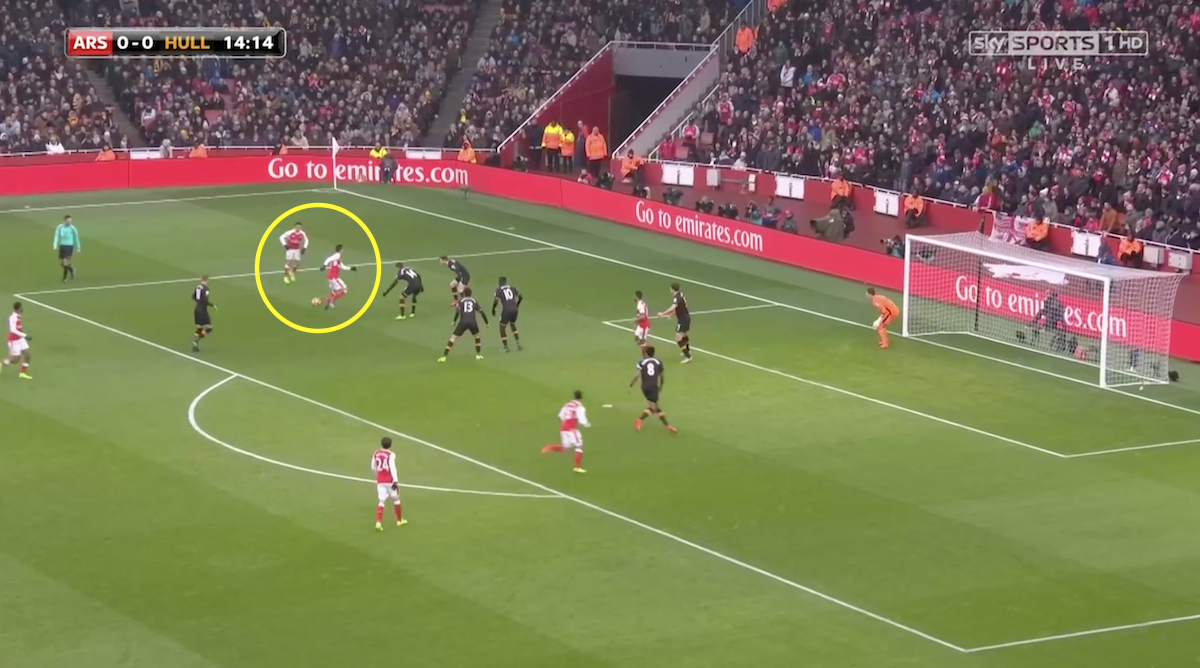 A simple square ball could have created something, but instead, the 28-year-old paused, delayed, gave Sanchez a pointless sort pass and Hull City snuffed out the danger.

There is currently a lack of directness and decisiveness about Özil’s game. You can cover up for those problems against teams like the Tigers. However, playing against the German champions, if you can’t break with pace and accuracy, or you give the ball away cheaply, they will punish you.

Rather than being a game-changer, the midfielder has become a luxury player, something you cannot afford in the top-level games.

Apparently, Wenger had a chat with Özil on Friday, but that obviously didn’t spark a performance on Saturday and with Olivier Giroud, Lucas Perez and Danny Welbeck available this week, huge questions would be asked if the German was to get the nod again on Wednesday, especially with the first-leg in Munich.

“I felt he was not completely confident technically,” the Arsenal manager said after the Hull City game. “I completely agree with you. That’s a problem because you think he can deliver something special. It’s true that technically he did things [against Hull] that he is not used to doing. I don’t know. It can happen. I can’t think of a specific reason.”

If Özil is once again picked to start, what does that say to the rest of the team. If he is allowed to continually fail to perform but continue to gain minutes.

There have been a few signs this season that the German international just isn’t up for the fight. Let’s not forget his failure to attempt to defend at Goodison Park against Everton, or his disappearing act against N’Golo Kante and Chelsea. 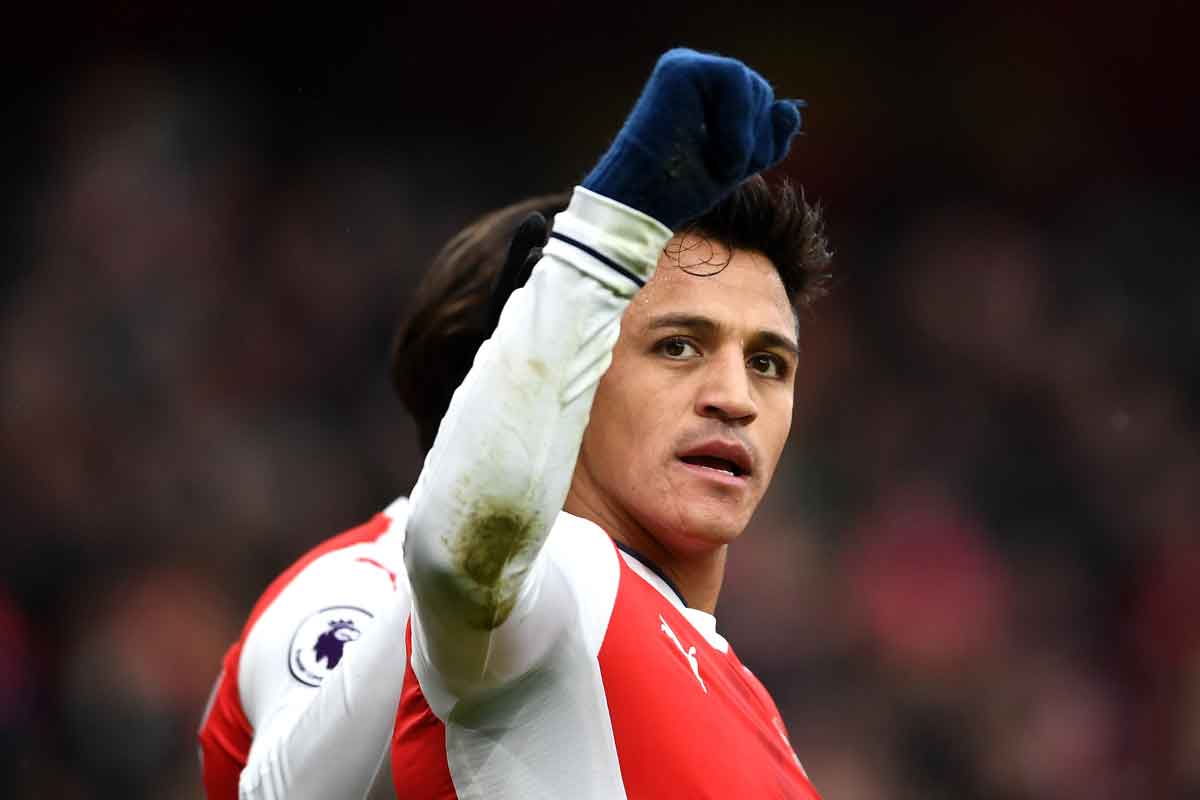 Sanchez should be the example for Özil to follow, you can see and feel his passion. Even when things aren’t going well or his team-mates aren’t matching his level, the Chilean doesn’t drop. He may show frustration, but as he proved again on Saturday, he is there when the chips are down. If Özil only had some of that belief, you have to think that Arsenal would be in a much better position.

Dropping the 28-year-old is almost a must now. Get a result against Bayern, or at least stay in the game for the second leg and you show him that he is not irreplaceable, maybe then he might realise that he needs a huge kick up the arse, not just a cuddle from Arsène.