Originally it was a left-field move which almost came out of nowhere in the summer. Jonny Evans being courted by both Manchester City and Arsenal.

Pep Guardiola apparently saw the Northern Irishman as the perfect addition to his – at the time – back three. Things have changed since then and due to injuries, he almost stumbled into the free-flowing 4-3-3.

Injuries to John Stones and the inconsistent fitness of Vincent Kompany has obviously sent the Catalan boss back on the search and rumours of their interest in the West Bromwich Albion defender have resurfaced.

At first, the Baggies were reluctant to do business. However, with Alan Pardew in charge, the new boss had admitted they will mull over a decision on the defender's future and there will be definite changes to the squad.

It seems selling the centre-back in January would help them make those moves. While they don't want to lose him, the funds raised could kickstart their survival bid.

While City look set to sign Aymeric Laporte, BBC Sport claims that doesn't mean they're against signing Evans, but it would depend on whether or not they can offload Eliaquim Mangala.

That makes Arsenal the favourites for the Northern Ireland international's signature.

They too play a back either a back three or a normal four-man defence and with Per Mertesacker retiring at the end of the season and injuries reoccurring for Laurent Koscielny and Shkodran Mustafi, reinforcements are a priority.

After being deemed unworthy of a role at Old Trafford by Louis van Gaal, in two seasons at the Hawthorns the 30-year-old has rebuilt his reputation and become coveted centre-back.

Given the riches Guardiola has to spend and the Catalan's famously particular – picky, even – approach to recruitment and tactics, a rugged Northern Irishman playing for an unfashionable club would hardly fit the profile of player the ex-Barcelona coach would normally court.

Yet Evans is clearly the man Guardiola and, to a lesser extent Arsène Wenger want. And when you remove the scepticism it is easy to understand why.

Due to all their fire-power going forward, City's backline, especially with Benjamin Mendy out injured, can still been seen as the weak link. Crystal Palace exposed their vulnerability in the air in their New Year's Eve 0-0 draw.

Arsenal, when things go against them, can claim to have issues all across the pitch, but defensively, they are not as strong as they could be.

While Evans isn't an exotic or exciting name, he is the dictionary definition of reliable. He is Mr 7/10 every week; a steady Eddie; someone who won't let you down.

Last season the Belfast native was hugely impressive as the Baggies, to the surprise of many, finished comfortably in the top half. He was a big part of that and his statistics underline his importance – and quality. 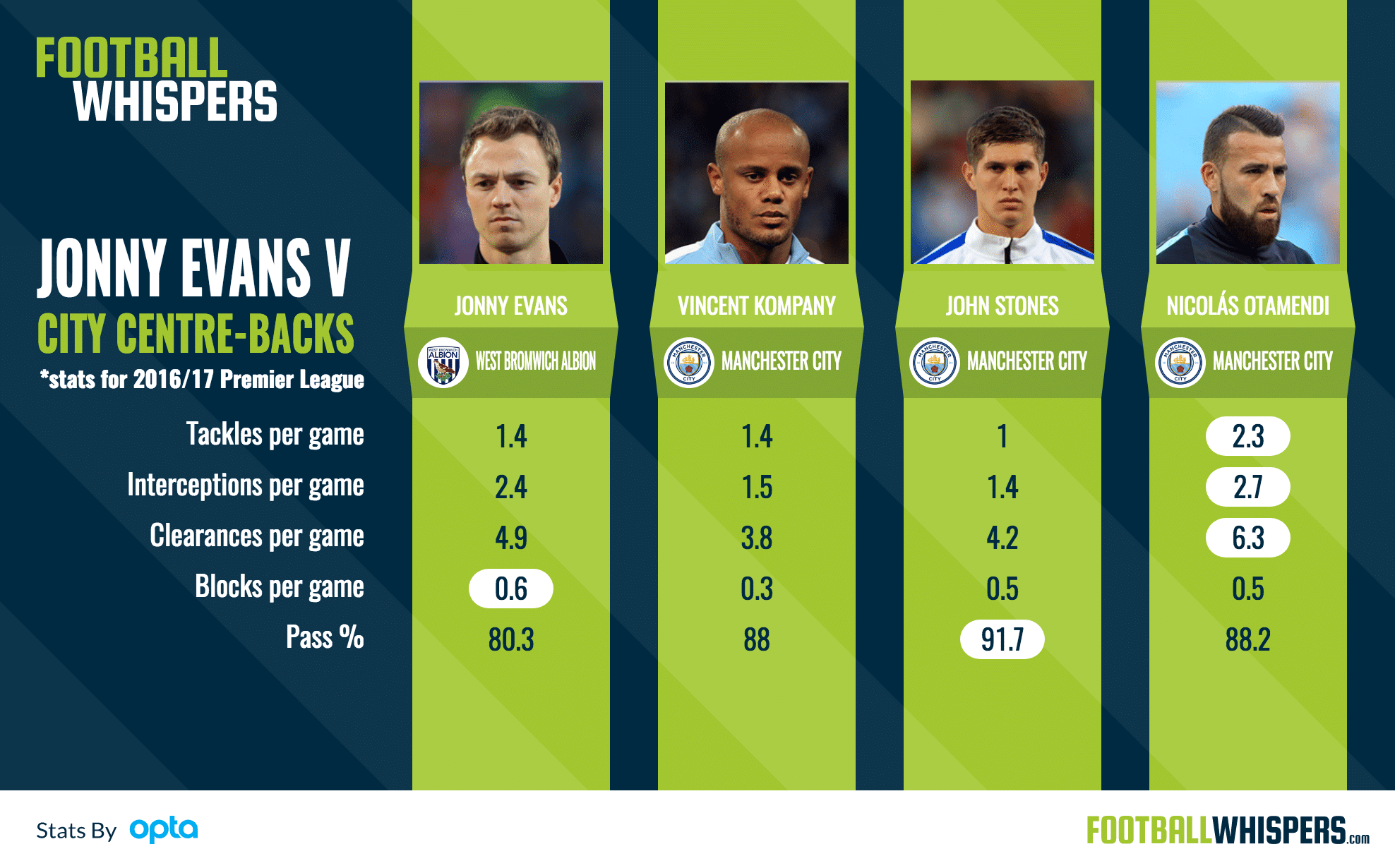 Evans managed more interceptions per game (2.4) – something which Guardiola will surely have noticed given his aversion to tackling – than Vincent Kompany (1.5) or John Stones (1.4). He was just behind Nicolás Otamendi (2.7 per game).

In terms of tackles, Stones was behind Otamendi (2.3) with 1.4. However, with Guardiola famously claiming last season he does not coach his defenders to tackle, that isn't an issue.

Being able to use the ball is imperative to any player under Guardiola, whereas playing under Tony Pulis, and now Pardew, is a different animal. Despite that, Evans completed an average of 80.3 per cent of his passes per game – impressive going given the Baggies play far more longer balls per game than City or Arsenal.

This term, more due to West Brom's struggles rather than Evans ability, the interceptions have come down to 1.8 per 90 minutes while his tackles won have dropped slightly to 1.1 per 90.

His is averaging 4.2 clearances and completes 79.4 per cent of his passes. With three long balls attempted each game, Evans keeps it short, exactly what Guardiola and Wenger will want from their centre-backs.

Conceding 34 goals in 25 games, defence should be one of Wenger's priorities, but with Evans now 30, it's not exactly looking to the future.

Yet, players with Premier League experience and the fight to strengthen the improvement in organisation we've seen in recent weeks could be a smart move.

Evans fits the bill for both clubs, and likely an attractive proposition to the player. It's now a question of who will stump up the cash.