One of the biggest challenges facing new Arsenal manager Unai Emery is the centre of defence. On the right, he has the lightning-quick Héctor Bellerín and on the left, he can rely upon Bosnia international Sead Kolašinac.

However, through the middle Emery will encounter one or two problems.

Laurent Koscielny’s persistent injury problems will almost certainly rule him out of Emery’s first draft for this new-look Arsenal squad, while Per Mertesacker’s retirement in May leaves a large, German-sized hole that will prove hard to fill.

Shkodran Mustafi and Nacho Monreal are decent backups, but aside from them there’s an awful lot of young, so-so players that won’t exactly quell Emery’s fears.

Calum Chambers may have proved his worth, to an extent, at Premier League level but the likes of Konstantinos Mavropanos, Rob Holding and Krystian Bielik certainly have not.

What Arsenal really need is a new face at the heart of defence that can provide grit and professionalism rather than blend in amongst a backdrop of average, unassuming defenders.

Rather that can do the good things just well enough, they need someone that can do the simple things superbly and provide a bit of stability and encouragement ahead of what will surely be a tough, transitional season.

As such, Arsenal could do far worse than a name that they’ve been linked with for quite some time now: Brighton and Hove Albion's Lewis Dunk.

While the English defender may not be a blockbuster name but excelled alongside Shane Duffy during the Seagulls' first Premier League campaign.

Brighton may have finished the last campaign in fifteenth place, but their defensive record was the ninth best in the division which, with limited resources in an exceptionally competitive league, is not to be sniffed at.

Similarly, Dunk averaged 1.18 tackles per match for the Seagulls last season which puts him second only behind Mustafi, who averaged 1.58. In comparison, Koscielny averaged almost half as many as the Brighton defender with just 0.67 tackles per match. So here we have a player that can header and tackle as well as any combination of Arsenal’s current stock of defenders.

When it comes to reading the game well and breaking down opposing plays or counter attacks, Dunk also tends to stand out among any future Arsenal teammates. The 26-year old made 6.4 interceptions per 90 last season, which was only bested by Koscielny.

Dunk has ably showcased his talents and evidently grasps the fundamentals of defending. While not to discredit Arsenal, some of their defensive collapses in the latter stages of Arsène Wenger's reign beggars belief. 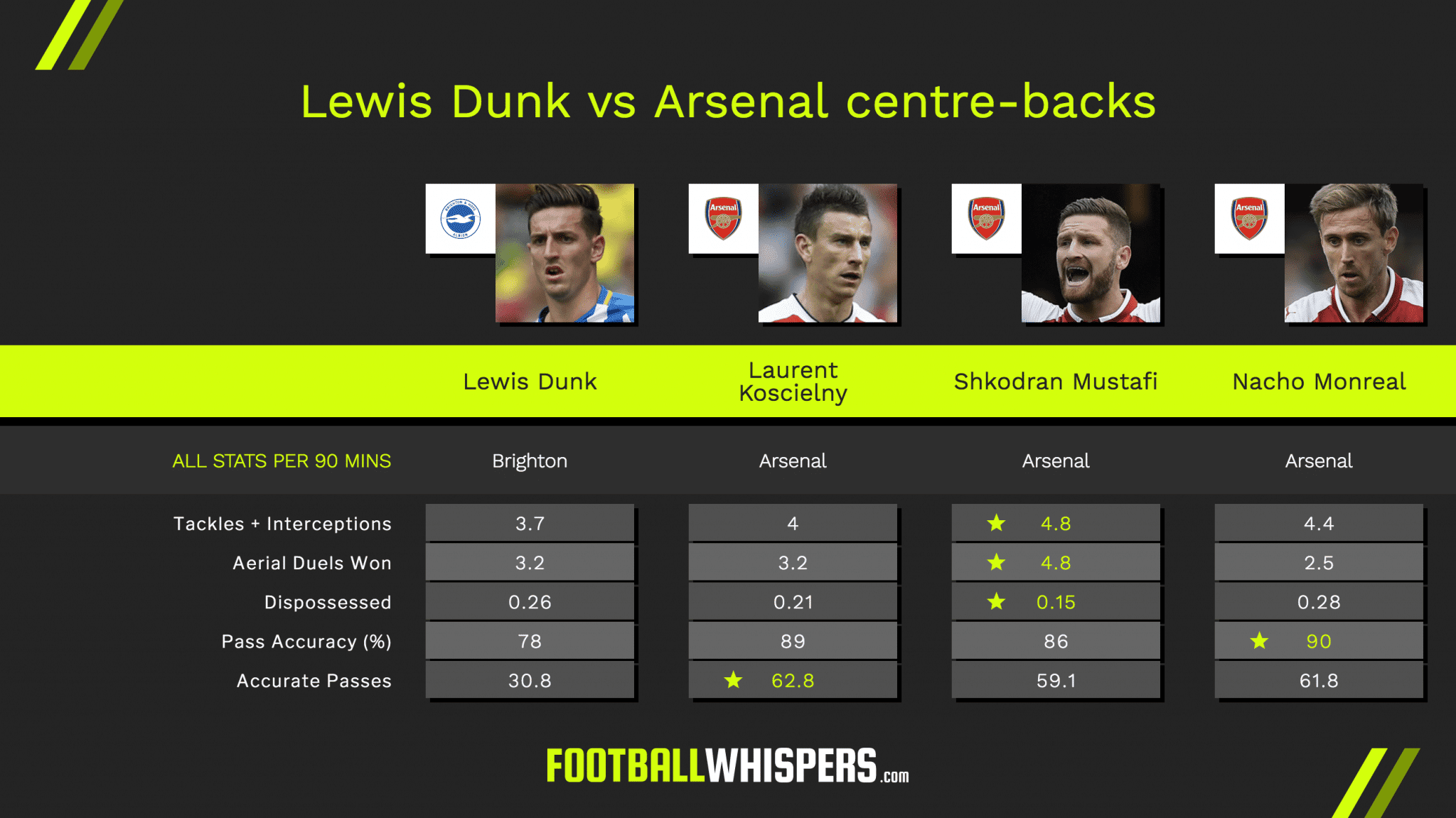 If the Gunners want to catch the teams above them in the Premier League table then they would do well to begin emulating them. Chelsea rely upon the physicality of Andreas Christensen and Antonio Rüdiger, the experience of Gary Cahill or the all-round consistency of César Azpilicueta.

Manchester City have an enviable quartet of centre-halves in Vincent Kompany, Nicolás Otamendi, John Stones and Aymeric Laporte while, at Liverpool, Jürgen Klopp significantly bolstered his defensive ranks in January with the impressive capture of Virgil van Dijk to supplement the likes of Jöel Matip and Dejan Lovren.

Despite their ability to pick out a pass, make quick transitions with midfielders, Mustafi, Koscielny and Monreal can sometimes be a little too cute in possession.

If the club hope to adopt a brave new approach to the coming season which departs from Wenger's philosophy, then perhaps a player like Dunk is exactly what they need.