While Pierre-Emerick Aubameyang has attracted plenty of plaudits this season, Alexandre Lacazette has gone about his business at Arsenal quietly but very effectively.

The Frenchman is not as prolific as his Gabonese teammate. He is not as quick, not as clinical in front of goal. But he is beginning to establish himself as an equally – perhaps even more – important player in Unai Emery’s team.

Lacazette’s qualities were in evidence against Manchester United on Sunday. For nearly 90 minutes, he worked tirelessly, harrying defenders and linking up play. And he played a key part in both goals, setting up Granit Xhaka for his long-range opener and winning the penalty that Aubameyang dispatched after the break.

Lacazette’s contributions, though often intangible and not appreciated by mere statistics, should not go unnoticed. He was signed from Lyon back in 2017 for his goals – he hit 100 in 203 league appearances for the Ligue 1 club – but he offers far more than that.

With Aubameyang so reliable in the penalty box, Lacazette can afford to take a backseat. There is no longer a pressure on him to be Arsenal’s main marksman. Instead, he has taken on a more creative role this season. No out-and-out striker has as many assists as Lacazette’s seven in the Premier League this campaign.

He still chips in with goals, of course. Lacazette has 12 in 29 league appearances this term, hardly an insufficient return.

What will encourage Emery most is the burgeoning partnership between Lacazette and Aubameyang. When the latter was signed from Borussia Dortmund many expected it to spell the end for Lacazette. There would be no place for him in the team; one would have to make way for the other.

That has not proved to be the case, though. Against United, Lacazette and Aubameyang were fluid and interchangeable, a menace for Chris Smalling and Victor Lindelöf. And when Lacazette won his side a second-half penalty, he was happy to let his attacking partner step up.

“It’s a great partnership,” Aubameyang said after the game. “Of course, the coach decides who plays and whether we play together or not, and we have to accept that, that’s normal. But I think we are both really focused on playing for the team and giving our best.” 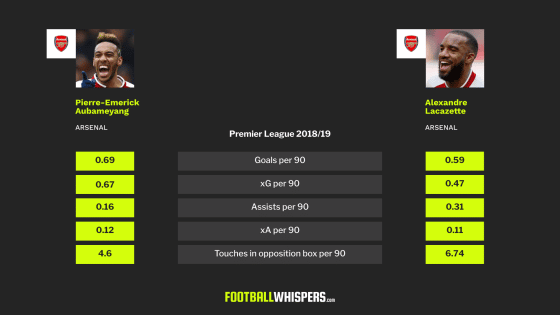 They have not always played together this season but when Emery has chosen to field both the signs have been good. Lacazette’s creative instincts compliment Aubameyang’s more poacher-like approach. Between them, they have 29 league goals this term, more than four teams – Newcastle, Cardiff, Fulham and Huddersfield – in the top flight.

It is little wonder, then, why only the top two – Manchester City and Liverpool – can better Arsenal’s goalscoring record in the top flight. The Gunners boast two strikers at the peak of their powers, who are beginning to forge an understanding that will terrify even the most astute of defences.

Lacazette has clearly benefitted from Emery’s arrival. The Spanish coach has been an admirer of the France international for some time, admitting that he attempted to bring him to Paris Saint-Germain.

And, at Arsenal, Lacazette has been given the confidence and freedom to play his natural game. He no longer appears encumbered by the weight of expectation. The signing of Aubameyang – contrary to how many expected it to play out – has helped Lacazette thrive.

“This year we are looking at him to go one step more in his level,” Emery said of Lacazette earlier this season. “We are very happy but my message to him is: every day, don’t stop. Don’t stop in training, don’t stop in matches, carry on to find his best performance. In each minute of the 90 minutes he is doing that.

“With his characteristics, we need him to feel happy in the team with the role and his quality. He has a very good mentality, good chances to score and is very efficient.”

So far, Lacazette appears to be responding to his manager. He, alongside Aubameyang, has been a major positive in a season of transition.

If the two continue to perform as they have this year, and Emery addressed the clear deficiencies at the other end of the pitch, Arsenal could soon find themselves challenging at the top of the Premier League again.