Winning nine on the bounce is always impressive, even if the most difficult fixture of the bunch was either Everton at home or Qarabag FK away. But Arsenal are just two points off top spot in the Premier League and Gunners fans continue to sing that they are ‘back'.

At least, they seem to be.

If you’re plugged into the statistical side of football, you may have heard that Arsenal’s underlying statistics aren’t quite as rosy as their points total. Winning games is great – it is the most important part of football – but the point of the stats is to see whether it’s likely to last.

On points and goal difference, Unai Emery’s side are fourth. Yet if you look at the quality of their chances, judged by Football Whispers’ expected goals model, they’re ninth.

And it's not like the defence is impressively strong; the Gunners are only eighth-best in the top flight for limiting the quality of chances they concede.

A snapshot of an 'expected goals table'

However, there are reasons to be cheerful, despite the numbers above, if you're an Arsenal fan.

Getting (slightly) better all the time

After a difficult start to the season that opened with matches against Manchester City and Chelsea, Arsenal’s general trajectory has been upwards as they've been winning matches.

If you add up their expected goal difference after every match, you can see it gradually increases as time goes on and that they get their noses in front game after game. 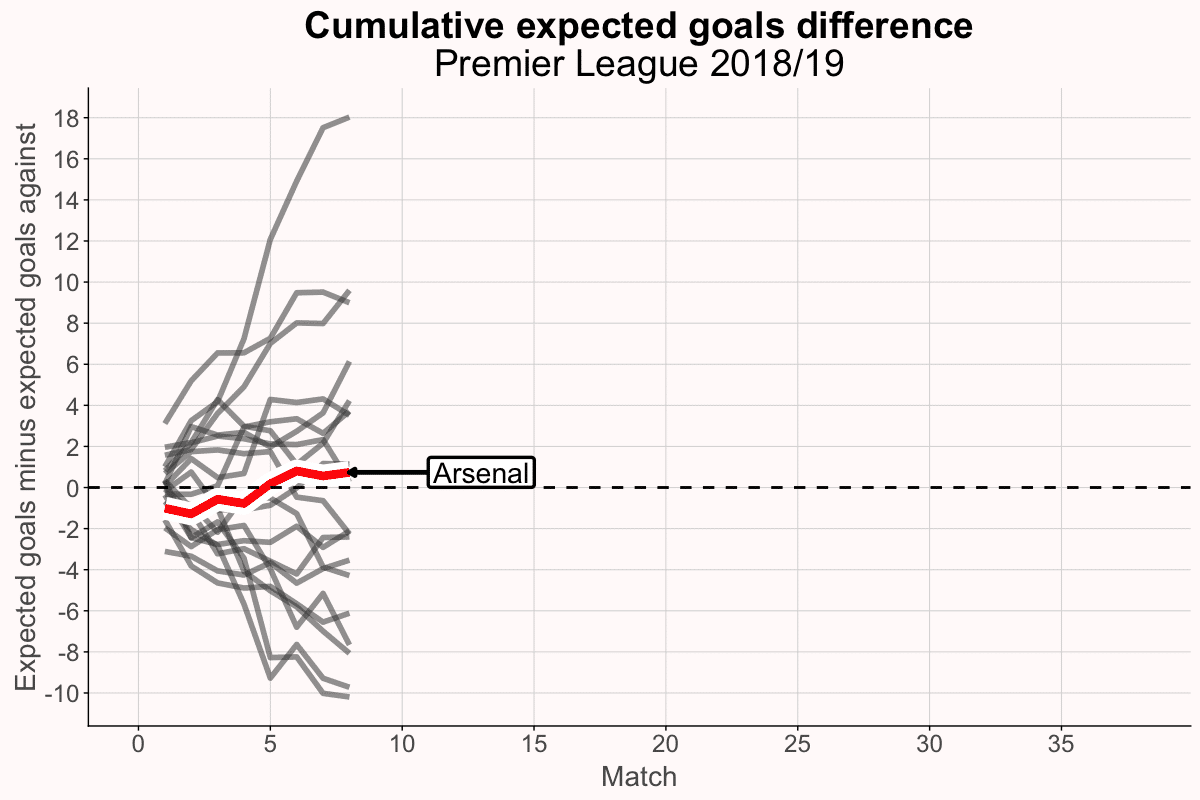 Granted, the slope isn’t very steep but it would look a lot steeper if Fulham, for instance, picked their shots like a normal team. On average, the Cottagers’ take some of the worst quality shots in the league, and they take a lot of them.

Against Arsenal it was no different, Slaviša Jokanović’s side peppered the Gunners goal but the average chance of these shots finding the back of the net was just 5.95 percent, according to Football Whispers’ model.

Emery’s team actually limited Fulham’s opportunities well, it’s just that the Whites were stat-padding. If they hadn’t been the trajectory of Arsenal’s trend line would look healthier.

Torreira the terrier and a Xhak attack

The improvement might have come about through a kinder run of games, a general gelling of the squad under their new manager, or, quite possibly, Lucas Torreira being used as a starter.

The imbalance in minutes could be a part of this, but the difference between him and Matteo Guendouzi on Arsenal’s stats is very noticeable.

When the Uruguayan is on the pitch, Arsenal’s stats are in the black. When Guendouzi is they’re in the red.

(Statistics for when play is on the pitch, per 90 minutes)

Alongside Torreira in midfield, Arsenal have the often criticised Granit Xhaka. Xhaka has his flaws and they were amplified in the 3-4-2-1 that Arsène Wenger was playing for much of the end of his time at the club , but he also has his merits.

One of these is moving the ball forwards, which he does very reliably. The Swiss star is right at the top of the list for players passing towards goal into the final third.

With 17.3 of these passes per game, he’s sandwiched between James Milner and Jorginho, certainly good company to be in.

He’s also popping up with 2.88 successful passes into the box, which is also marginally more than than the Chelsea midfielder.

Arsenal’s statistics may not be good right now, but the fact that their trend line is going upwards – rather than being flat or, worse, going downwards – is something in their favour.

Their fixture schedule also gives them plenty of time to improve over the course of the year. Apart from facing Tottenham and Manchester United in back-to-back games at the start of December, the Gunners don’t have any tricky runs of fixtures which might disrupt the process of becoming an Emery team.

It’s worth remembering that most people assumed Chelsea would be out of contention for the title race as they’d need time to adjust to Maurizio Sarri. The same assumption was made about Arsenal, and just because Sarri’s side have got out of the blocks quickly doesn’t mean that Emery’s new team should have done too.

Things take time. The run of results might be covering over some genuine reasons for concern but Arsenal might end up getting to a good place.