Arsenal wanted Daniele Rugani but couldn't agree a deal with Juventus for the defender. They then attempted to bring in RB Leipzig centre-back Dayot Upamecano only to retreat when the Bundesliga side demanded £85million.

And that is why in the final hours of the summer transfer window the Gunners turned to David Luiz. It sounded fanciful that the Brazilian would trade Chelsea for their London rivals; paper talk which would inevitably fade out to nothing ahead of the new Premier League season.

But then reported Luiz had trained away from the Blues' first-team on Wednesday at the behest of new head coach Frank Lampard. And that the 32-year-old had become a disruptive influence over the past week in order to push through a move to the Emirates.

It's not a good look for Luiz, one of the dressing room leaders at Stamford Bridge. Yet if he isn't going to be first-choice under Lampard – reports suggest Kurt Zouma and Andreas Christensen will be preferred – it's no surprise he has caused a fuss.

And if Arsenal are prepared to make him first-choice, prepared to improve the two-year contract he signed with Chelsea in May, and prepared to pay £8million for a 32-year-old defender, then it's a move that may suit all parties. 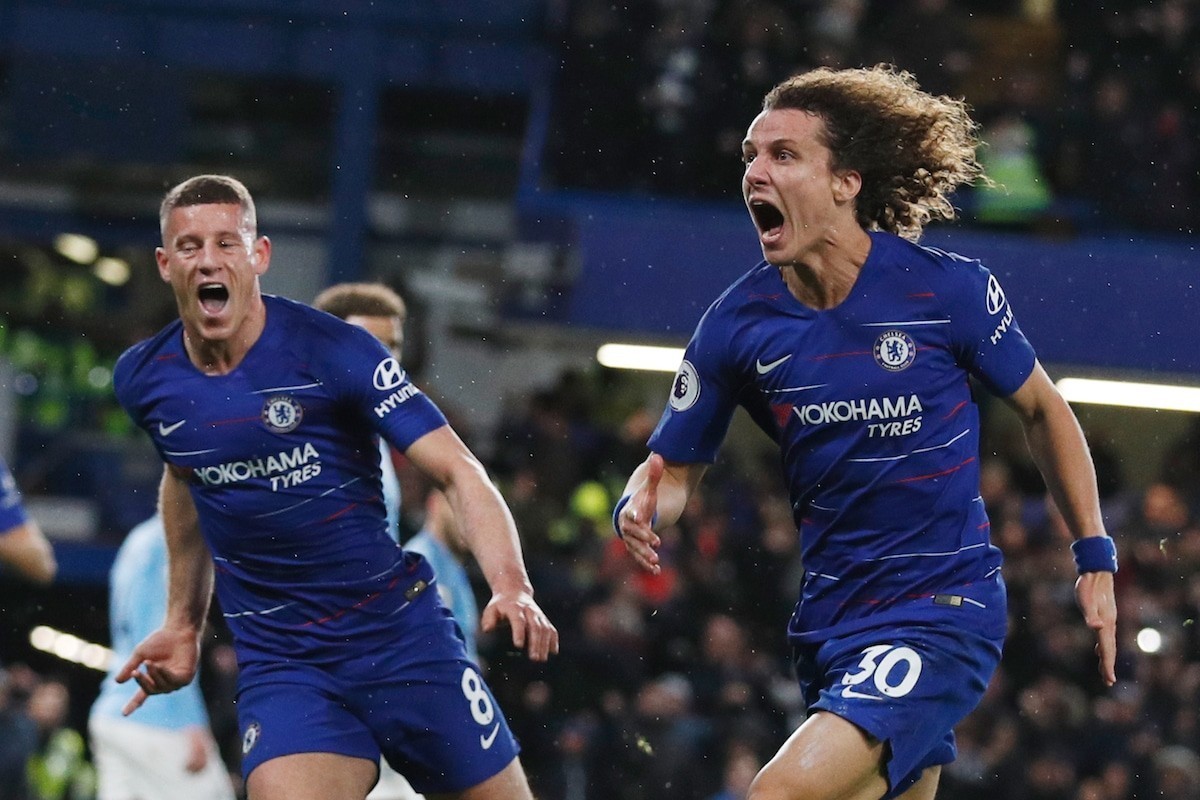 Luiz will arrive at the Emirates to replace Laurent Koscielny, who earlier this week forced through a move to Bordeaux.

His experience will be vital in the dressing room – the Brazil international is a serial champion having won four titles, two Europa Leagues and a Champions League during his career. There remains, however, a question mark over his defensive ability.

Luiz's best season in English football – the 2016/17 campaign – came as part of a three-man defence. He was stationed at the heart of the defence but protected by César Azpilicueta and Gary Cahill.

In a back four, with only one other centre-back alongside him, Luiz has never completely convinced. He can momentarily switch off at the wrong moment, can lose his head when faced with adversity.

He was expected to grow out of these flaws. Given his age, it seems unlikely Luiz will do so. But if Unai Emery can minimize these lapses then Arsenal have themselves one of Europe's best ball-playing defenders.

Last season in the Premier League, Luiz completed an average of 64.07 passes per 90 and of these 28.18 went forward, the second-highest figure among top-flight defenders. 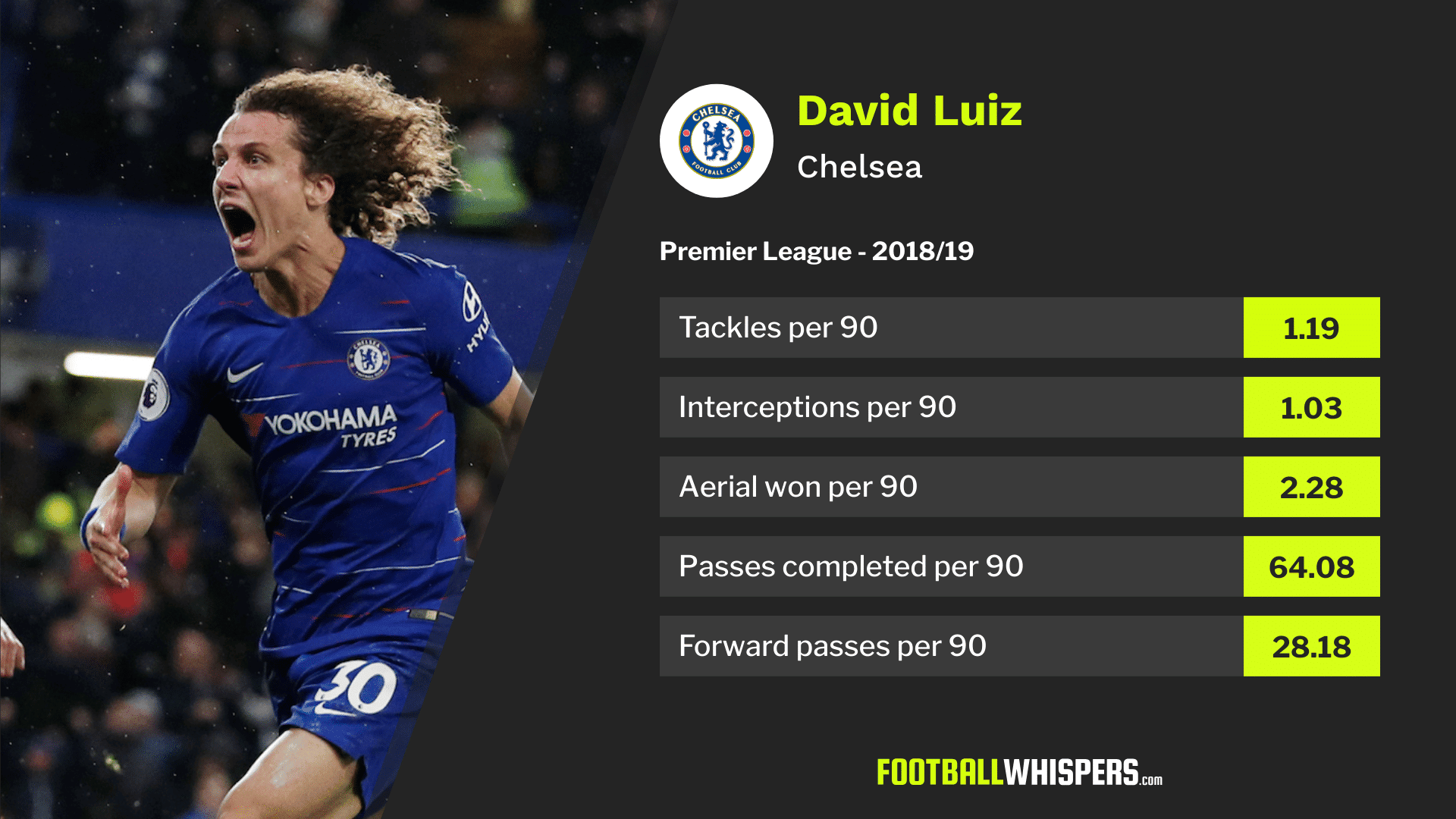 Luiz was playing under a head coach who was fixated on possession, Maurizio Sarri, but his ability to effectively advance possession up the pitch is a valuable commodity for any side.

Yet Luiz's passing range meant he wasn't restricted to press-breaking passes. He was also able to fashion goalscoring opportunities on a consistent basis and was ninth among Premier League defenders for Big Chances created per 90 (0.3).

This was predominantly done when opponents attempted to squeeze Chelsea into their own half. The Brazil international would receive the ball and often hit an excellent crossfield pass to Pedro to open the pitch or clip the ball behind the opposition defence for the Spaniard.

The below highlights the shots Luiz teed up for his Chelsea team-mates last term, many of which were created through passes from inside his own half. 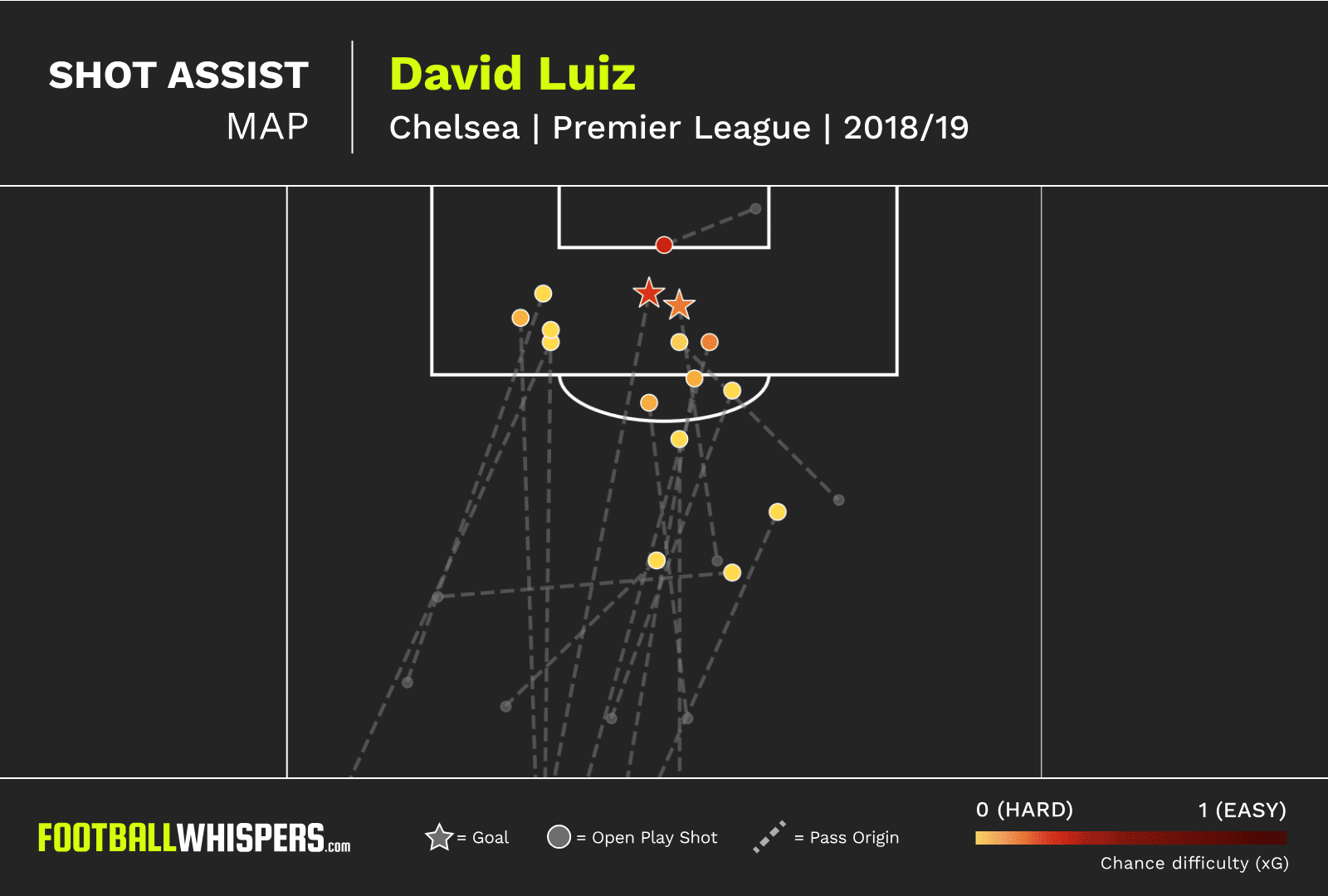 Luiz could have great success at Arsenal if he is able to strike up a similar relationship with Nicolas Pépé. The Ivorian is quick enough to break behind a back four and has the technique required to collect a raking pass and finish. Pierre-Emerick Aubameyang would also benefit.

At £8million in an inflated transfer market, Luiz is a shrewd signing for Arsenal. The Gunners may only get one season of regular first-team football from the Brazilian but he can then be eased out of the side when William Saliba arrives next summer.

Chelsea won't be disappointed, either. Only three months ago it looked as if Luiz would leave Stamford Bridge for nothing. Now they will receive a fair fee for a player who wasn't going to be a starter under Frank Lampard.

It's a rare win-win transfer.