Nostalgia is a wonderful thing. As football fans, we love looking back at old teams with great players, reminiscing about the good old days. On Wednesday night, as Arsenal drew 2-2 with Paris Saint-Germain, something clicked, a sad realisation struck. There are no more world-class centre-backs in the modern game.

Franco Baresi, Paolo Maldini, even Giorgio Chellini in his prime, Italian defenders have always been the torch bearers. Carles Puyol, although erratic and prone to a few hot-headed moments, would walk into just about any of the current top clubs.

We have entered a world where Javier Mascherano, Real Madrid's Pepe and Jerome Boateng at Bayern Munich, are considered the best at their craft. Franz Beckenbauer – if he was dead – would be turning in his grave.

Going into Wednesday's UEFA Champions League fixture, Arsenal were 17 games unbeaten and knew a 1-1 draw would be enough to score top spot in the group and hopefully an easier passage in the Round of 16. Keep things tight, hit the Parisians on the break and the result – with PSG missing players all over the pitch – was there for the taking.

After 18 minutes, the Gunners back line were ripped apart with a simple piece of movement from Edinson Cavani. In fairness, the whole move was littered with defensive errors. 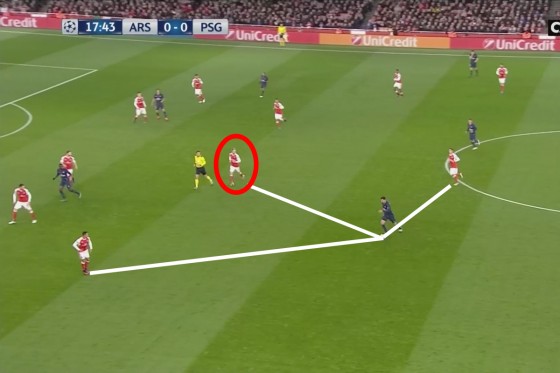 Thiago Motta was given so much room you would have thought he was suffering from leprosy. Aaron Ramsey (in red) failed to pressure the ball, an issue throughout the first half, the Italian was given an age to pick his pass.

On the far side, the Uruguayan striker made his move, and all he did was simply move away from the centre. That created a huge gap between Laurent Koscielny and Shkodran Mustafi. At this point, if the French defender, who can see the whole play in front of him, steps up and keeps in line with his German partner, Blaise Matuidi would be a yard offside and the danger gone. 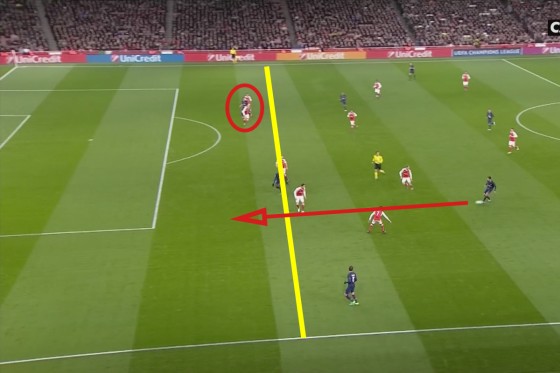 Carl Jenkinson doesn't cover himself in glory, paying Maxwell too much attention, rather than watching Matuidi's run. However, the blame should fall with Koscielny. Rather than get his positioning right, he's fooled by a very basic run. Rather than trusting that he and Kieran Gibbs could deal with a cross if Cavani was in between them both.

Matuidi is slipped through and the France international drills in a low cross for the striker to slide in at the far post.

A very simple move, easily avoided if Koscielny had kept to the basics of defending.

Premier League defenders have made a career out of poor positioning. John Terry, even in his prime, was more known for his last-ditch tackles. Fans loved them, it's a great slow-motion replay, but the truth is, if you have to make a lunging, guts and glory tackle, you’ve been way out of position to begin with.

Rather than with Chelsea, Terry’s best moment came against Slovenia at the 2010 FIFA World Cup. Diving head first at the feet of Zlatko Dedic to try and clear the danger, it would have been easier if he’d been there to begin with. But that doesn’t make him the hero he has become.

When you investigate the statistics, centre-backs don’t make as many tackles as you would think. They shouldn’t have to. Their game should be built around clearances and interceptions. Reading the game, watching the attacks develop and pounce when the opportunity is there. The best-ever defenders were pro-active, not re-active. Everton’s Idrissa Gueye, a battling, energetic central midfielder, leads the Premier League in tackles made. He averages 4.8 per game, 1.7 interceptions and 1.1 clearances. The first centre-back to appear in the ranking is Nicolas Otamendi, the Manchester City defender makes 2.9 tackles per game. Eric Bailly is down at 2.3, with Mustafi at the same level. The Arsenal man makes 3.2 interceptions and 5.4 clearances.

Stats are always difficult to compare. The top clubs should not be making the same numbers in terms or tackles, interceptions and clearances as the smaller teams in any league. They have more of the ball, boss possession and dictate the play. With other clubs chasing the game, they are the ones making the defensive actions. That’s why Cabral at Celta Vigo, with 3.1 tackles per game leads the top leagues in Europe. However, that’s not far away from Otamendi, which suggests that the Premier League centre-backs are making more tackles that they should be.

Over in Serie A, the breeding ground for truly excellent defenders, Leonardo Bonucci, who is regarded as one of the best at his position, makes on average, just one tackle per game. Even Chiellini, at 32 years old, with the legs of a 37-year-old, makes just 1.4 per game. Raphael Varane at Real Madrid makes 1.5 tackles per game and PSG’s Thiago Silva is averaging down at 1.1.

On Wednesday night, despite his impressive numbers, Thiago Silva didn’t cover himself in glory for Arsenal’s second goal. Many will look towards Marquinhos and Marco Verratti for conceding the goal, but the finger has to be pointed at their captain.

As the ball comes in from the right, the Brazilian is caught on his wrong foot, off balance and tries to clear the ball with his right-foot when his left would have been the better option. That forces Marquinhos to try and clear from a congested area and it fires the ball into the Italian midfielder. 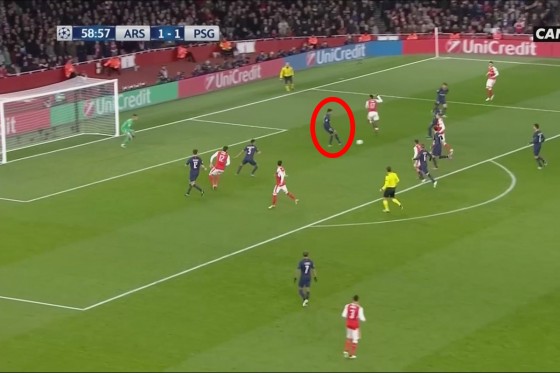 Both teams are supposed to have two of the best central defenders in Europe, and perhaps that is the new reality we have to accept. The golden days of defenders are gone, the level we thought was world-class is longer in existence. On the other hands, maybe if Maldini, Fernando Hierro, Laurent Blanc or Matthias Sammer were judged on the amount of tackles or interceptions per game, as the modern-day defender are, we wouldn’t hold them in such high regard.

However, you only have to think back to players like Alessandro Nesta, Rio Ferdinand and Marcel Desailly to quickly realise that no one in the current game measures up to the very high level that they have set.