In Ligue 1 this season there have been few better right-backs than Strasbourg's Kenny Lala. Not that he would admit that, mind.

An unassuming character, the 27-year-old has taken the long road to the top. As a teenager he shunned offers from professional clubs. He even decided the famous Clairefontaine national football centre wasn't for him.

“When you do not go down that route, there are few ‘survivors',” Lala admitted in an interview with Onze Mondial. “I went to Clairefontaine and then I had a week with Cean. It was after that I decided a training centre wasn't for me. Cean asked me to come back but I didn't respond.”

Instead, he opted to play amateur football and joined Paris FC, then in Championnat National, the third tier of French football.

He spent two years playing for the club's youth side and was then promoted to the first-team squad at 18 years old. After just a sole campaign in senior football, Lala did enough to earn his move to Ligue 1.

Valenciennes gave Lala the break he needed but he didn't become a regular until the club's relegation to Ligue 2 in 2014. A switch to Lens, also in the second tier, occurred a year later and it wasn't until the summer of 2017 that the full-back returned to the top flight.

He joined newly-promoted Strasbourg on a free transfer and, at the age of 25, was ready to make his mark in Ligue 1.

“I have grown as a player over the years,” he said on joining the club. “I have gained concentration and consistency and have progressed technically and tactically also. I cannot wait to start at the club.”

Strasbourg managed a 15th-place finish last term. This season they're in the top ten and that is in no small part down to their right-back. He has struck five goals but, more importantly, has claimed nine assists.

That figure is one no defender can match and is only bettered by in the French top flight by Nicolas Pépé, Téji Savanier, and Angel Di Maria. 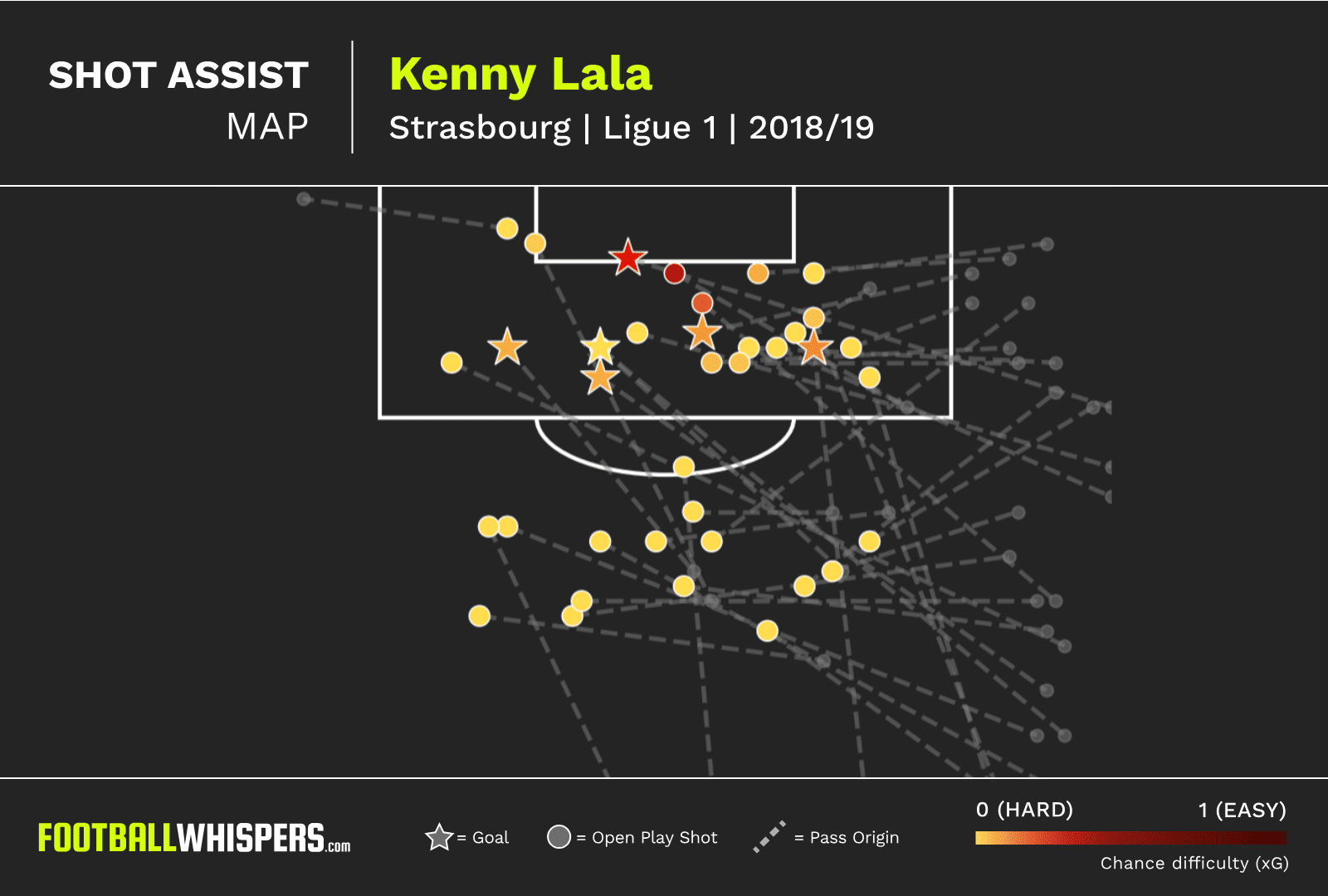 Given his effectiveness in the final third, it is unsurprising bigger clubs are circling. Newcastle United were interested in January but couldn't put together a deal. Now Arsenal and Manchester City have been linked with the defender.

“The summer going to be a turning point in my career,” Lala acknowledged in his interview with Onze Mondial. “As a player, you are always attracted by the big clubs. It's hard to say no to Real Madrid, Barcelona, Manchester City, Bayern Munich, Paris Saint-Germain. Even Lyon, who are a respected club.”

The jump from Strasbourg to European powerhouse is not small, and very few players would have the rounded skillset required to make the leap and not be overawed.

Lala, though, is ready. His years in the lower echelons of French football honed his defensive nous. He isn't a full-back who flies forward and abandons his post. The Frenchman is careful, considered, and picks his moments. It's why he wins back possession in the attacking third 0.5 times per 90, the fifth-highest total among defenders.

And if he is caught out, he will recover quickly and ensure his side's defensive structure isn't weakened. 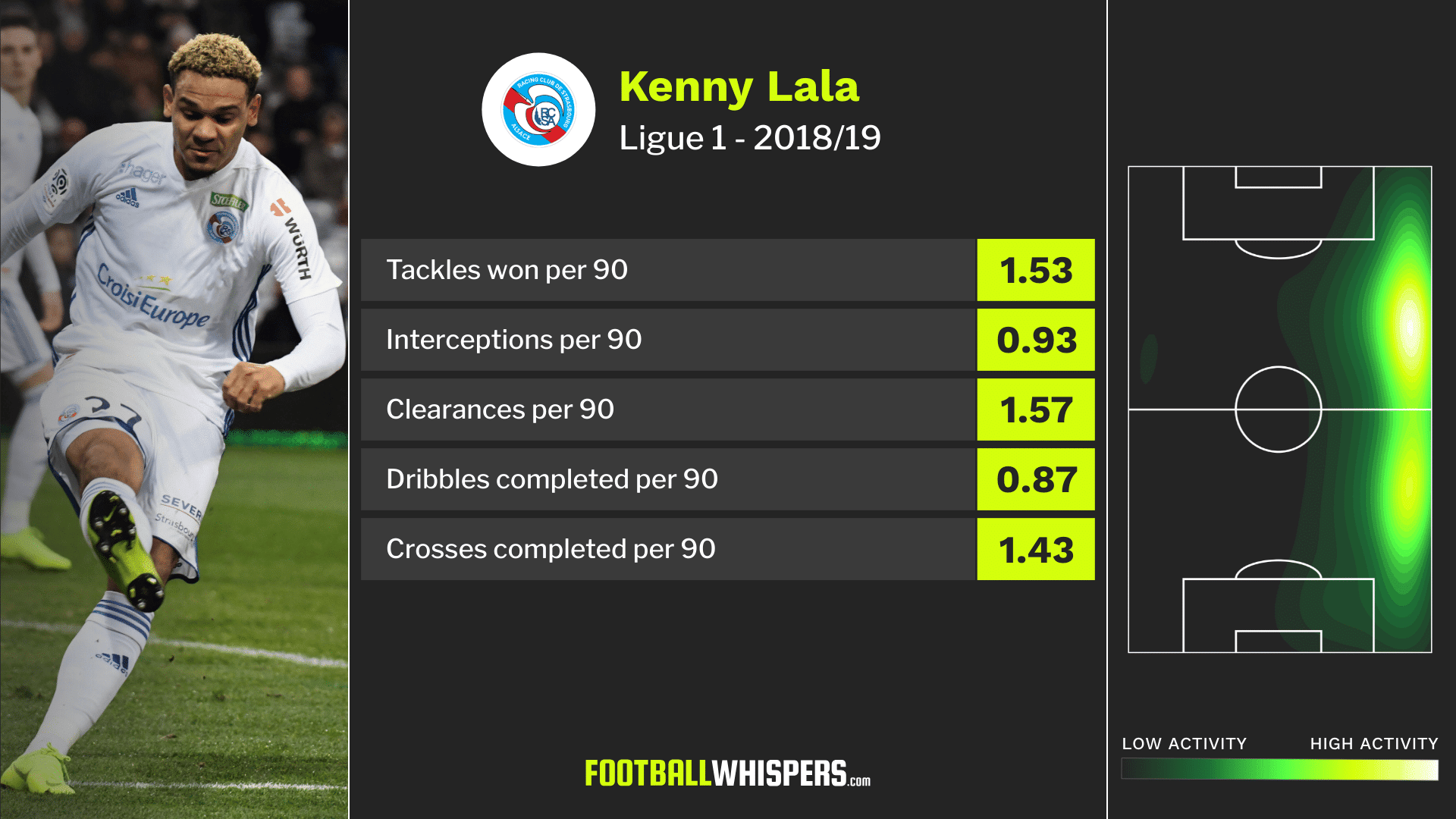 In the final third, he is a difference maker. His average of 1.43 crosses completed per 90 can only be bettered by two Ligue 1 defenders. He is also in the top ten for open play key passes (1.13) and big chances created (0.23) per 90.

Then there are his set pieces. Lala is a dead-ball specialist; he has averaged 0.5 set piece key passes per 90 this term – the second-highest average in the division – and has also scored free-kicks and penalties.

Clearly, he has the technique to thrive at a top club. All the above figures have been achieved in a side whose aim for the season is survival. With better players around him, there's no reason Lala can't become more effective.

The only concern would be over whether he would suit the pressure cooker environment that comes with playing for a title challenger. Lala isn't someone who thinks of himself a star and he has questioned how the likes of Neymar handle the worldwide pressure and criticism.

“It's part of the job but it's hard for me to do it. I always stop with fans because we have to please people, but I do not want to have this image of a star. I am like everyone else.”

Lala may not want to accept it but he has blossomed into a star at Strasbourg. He has everything a big club would want and will not cost an extravagant fee.

He is one of those rare survivors he spoke about. A poster-boy for what can be achieved if you follow your own path.