Arsenal had to break their transfer record to sign Alexandre Lacazette from Lyon this summer.

They paid £52.7million to secure the French striker's services, which eclipsed the £42.4million they paid to bring in Mesut Özil from Real Madrid in 2013.

Several reports suggested the France international was keen to move to the Emirates. How true they were is another story but the Gunners have had multiple bids for the 21-year-old rejected by the Ligue 1 champions.

Hopes were further dented on Monday morning when BBC’s David Orstein, usually on the money when it comes to events in north London, tweeted that Arsenal were becoming less optimistic in their pursuit of Lemar.

It was always going to be a tough ask to land the winger. Monaco wanted around €60million on the table to begin negotiations and even then, the Monegasque club are planning for the new season with Lemar in their starting XI.

Only one player in Europe’s top five leagues who plays on the left managed more key passes than Lemar last term. That man is Barcelona’s Neymar, with 91.

Next is Lemar with 65, joint with Napoli’s Lorenzo Insigne. Landing either of those two players is unlikely, but if the French manager is keen on signing a star to play on the left of the attack, there are other options out there.

We have picked out five that the Arsenal boss could turn to if he is unable to secure the signing of Lemar. 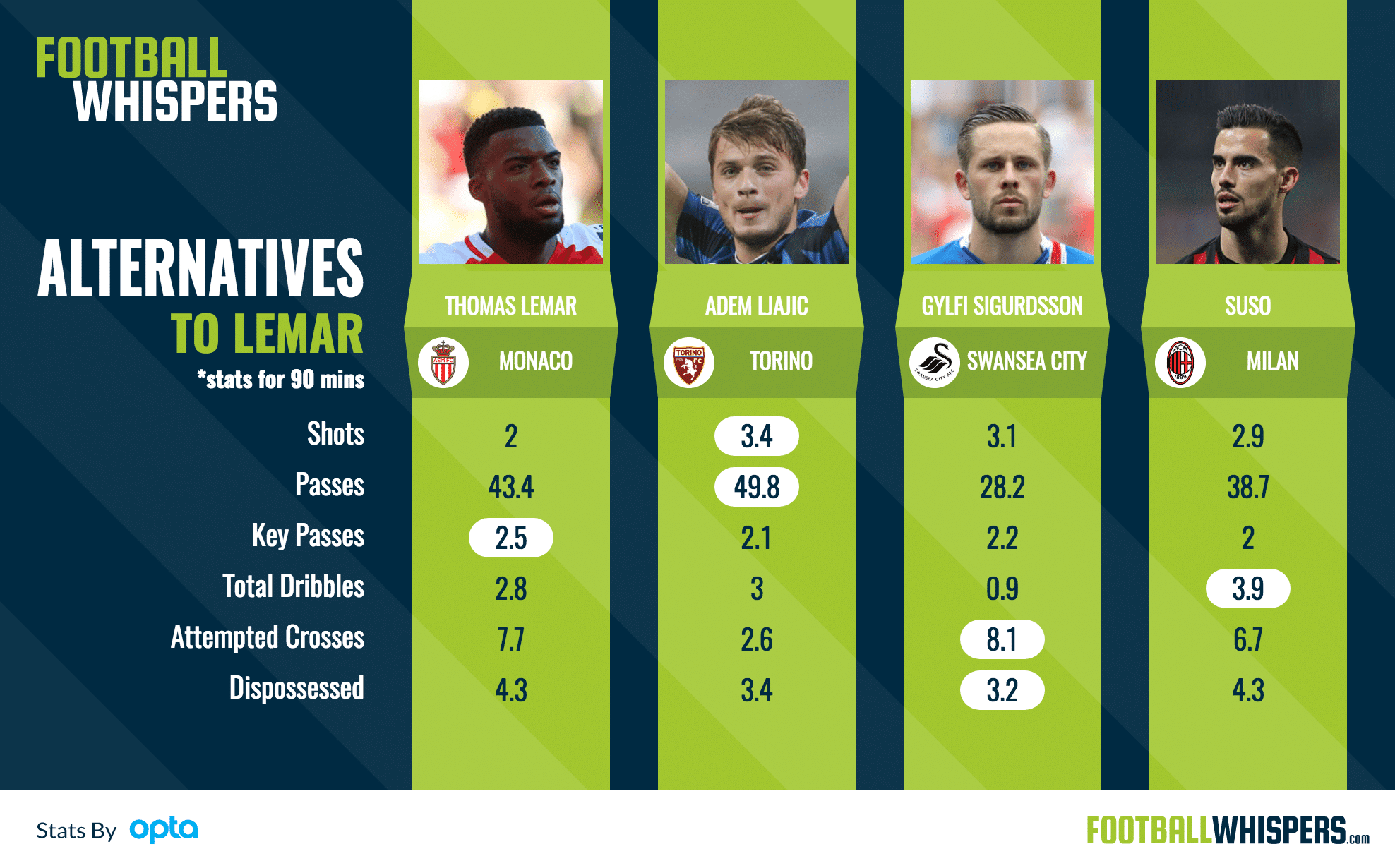 The Serbian wideman played 36 times for Torino last term, scoring 12 goals and adding 11 assists. One of the highlights was a free-kick at the Juventus Stadium which gave El Toro the lead at the home of their city rivals.

Keen the let the ball fly from distance, Adem Ljajic attempts 3.4 shots per 90 minutes. On average he plays 49.8 passes, attempts 2.6 crosses and makes 2.1 key passes per game. Hence why he claimed 11 assists.

Excellent from set-pieces, Ljajic would be perfect for that role on the left of the Arsenal front three, assuming Alexis Sanchez gets his wish and moves on.

Ljajic is most confident on his right-foot so naturally drifts into the middle of the pitch. From there he has excellent vision to pick out the runs of the strikers.

The Serbian’s understanding with Andrea Belotti at Torino has been key to the Italian’s great record in front of goal and Lacazette would benefit greatly from his service.

Faster and stronger than Lemar, Ljajic could be better suited to life in England and able to adapt quickly, thus providing the Gunners with an instant spark. 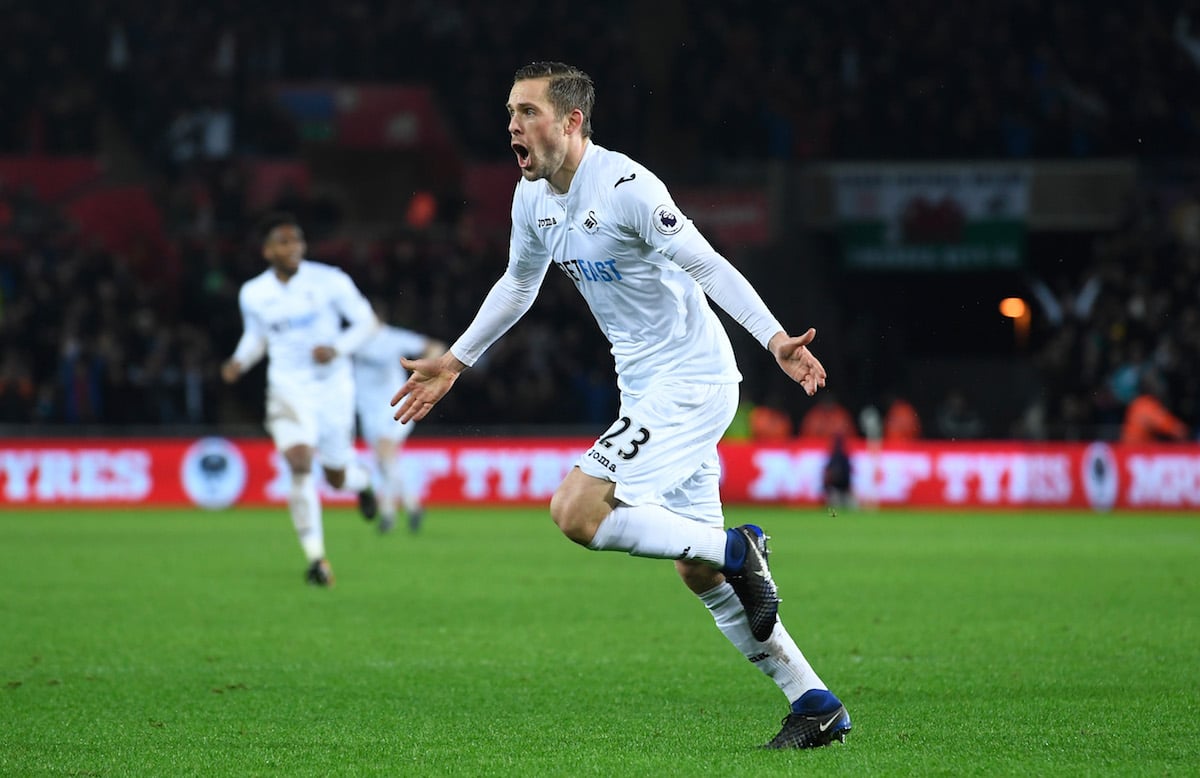 A known Everton transfer target, however, he Toffees are reluctant to pay £50million for the Icelandic playmaker this summer.

But thirteen assists and ten goals in 40 appearances is a superb return for a player in a poor side. The Swans improved under Paul Clement but that doesn’t hide the fact that Sigurdsson was surrounded by a weaker supporting cast.

Take his 3.1 shots and 2.2 key passes per 90 minutes and put it in a team like Arsenal and his output could be potentially decisive. Sigurdsson sees the ball less than Ljajic, with 28.2 passes per 90, but he delivers many more crosses into the box, with 8.1.

Give Lacazette, Sanchez and others that sort of service and you increase their chances of success.

“They can't sell him, it's as simple as that,” former Welsh international John Hartson told WalesOnline. “Paul Clement wants players in his team that will fight for the shirt, which Sigurdsson has always done.

“The amount of goals and assists he gets is just unbelievable, and quite simply, Swansea play far better when he's in the side than when he isn't.”

If Wenger was willing to pay £50million for Lemar, he should take it and sign one of the most creative players in the Premier League now that it looks like a deal for the Frenchman is off.

A known transfer target for Spurs, 23-year-old Suso could be keen on a return to the Premier League. The former Liverpool youngster enjoyed a good season in Milan, finishing with seven goals and nine assists.

But as Milan go down a new path following Chinese investment, making a whole host of new signings in the process, there’s no guarantee the Spaniard could play another 34 games next term.

Last season Suso attempted3.9 dribbles per 90 minutes and was an attacking force down the wing. Although right-footed, he can play on either flank to good effect.

Rather than continually run into trouble, he makes 38.7 passes per game and tries 6.7 crosses. Last season he made as many key passes as Liverpool’s new signing Mohammed Salah, and at two per 90 minutes, he is more than a match for Sigurdsson and Ljajic.

“I haven’t signed a contract renewal yet, but I am very happy at Milan, this is my team, my family is happy and I will certainly remain here,” he said during the Sportitalia Awards.

His current deal runs until 2019, so there’s no rush to agree new terms. However, the arrival of Hakan Calhanoglu and Andre Silva – and the potential signings of Alvaro Morata and Pierre-Emerick Aubameyang – could see his minutes limited this season.

The guarantee of regular football at the Emirates could spark a move, although Suso has said his heart is in Milan.

But while it may be easy for Arsenal to throw all their eggs in one Lemar shaped basked, if a deal doesn’t pan out before the deadline day there are plenty more fish in the sea.