Arsenal breathed new life into their chase for a top-four Premier League finish by obliterating Everton 5-1 at the Emirates on Saturday night.

The Gunners, staring new signings Pierre-Emerick Aubameyang and Henrikh Mkhitaryan for the first time, looked dynamic in attack and, for the most part, solid defensively.

The Toffees, meanwhile, were dead and buried after an abysmal first 45 minutes, trailing 4-0 at the break, but Sam Allardyce can take heart from his side's second-half performance.

Aaron Ramsey's first career hat-trick grabbed the headlines, but the way Aubameyang and Mkhitaryan assimilated to their new surroundings, forming formidable understanding with Mesut Özil and Alex Iwobi, was the most encouraging element of a stellar performance for Arsenal.

The result was a timely morale boost for Arsène Wenger's men following their midweek defeat to Swansea City. They will now enter their enter the North London derby against Tottenham Hotspur at Wembley next weekend full of confidence.

Here are the five things we learned from Arsenal's comfortable victory over Everton.

Alexandre Lacazette, Arsenal's most expensive ever signing until last week, had to content himself with a place on the bench, but there can be no doubt Aubameyang added a dynamic edge to the Gunners' attack that the Frenchman has been unable to thus far at the Emirates.

Aubameyang marked his debut with a goal, latching on to a Mkhitaryan pass to delicately lift the ball over the on-rushing Jordan Pickford with his weaker left foot, although he should have been adjudged offside.

But there Gabonese striker's general play evidenced something the Arsenal attack has been bereft of since Thierry Henry's pomp: intelligent movement and a genuine, pacy threat in behind.

Aubameyang only touched the ball 25 times against Everton, but his ability to ghost into dangerous areas and exploit space on the counter will have excited Arsenal fans.

One of the most impressive aspects of Arsenal's play was the way they were able to tweak their style in order to play to Aubameyang and Mkhitaryan's strengths.

During their time together in the Bundesliga, the former Borussia Dortmund pair thrived in a team who pressed tirelessly to regain possession and then attacked briskly in transition. 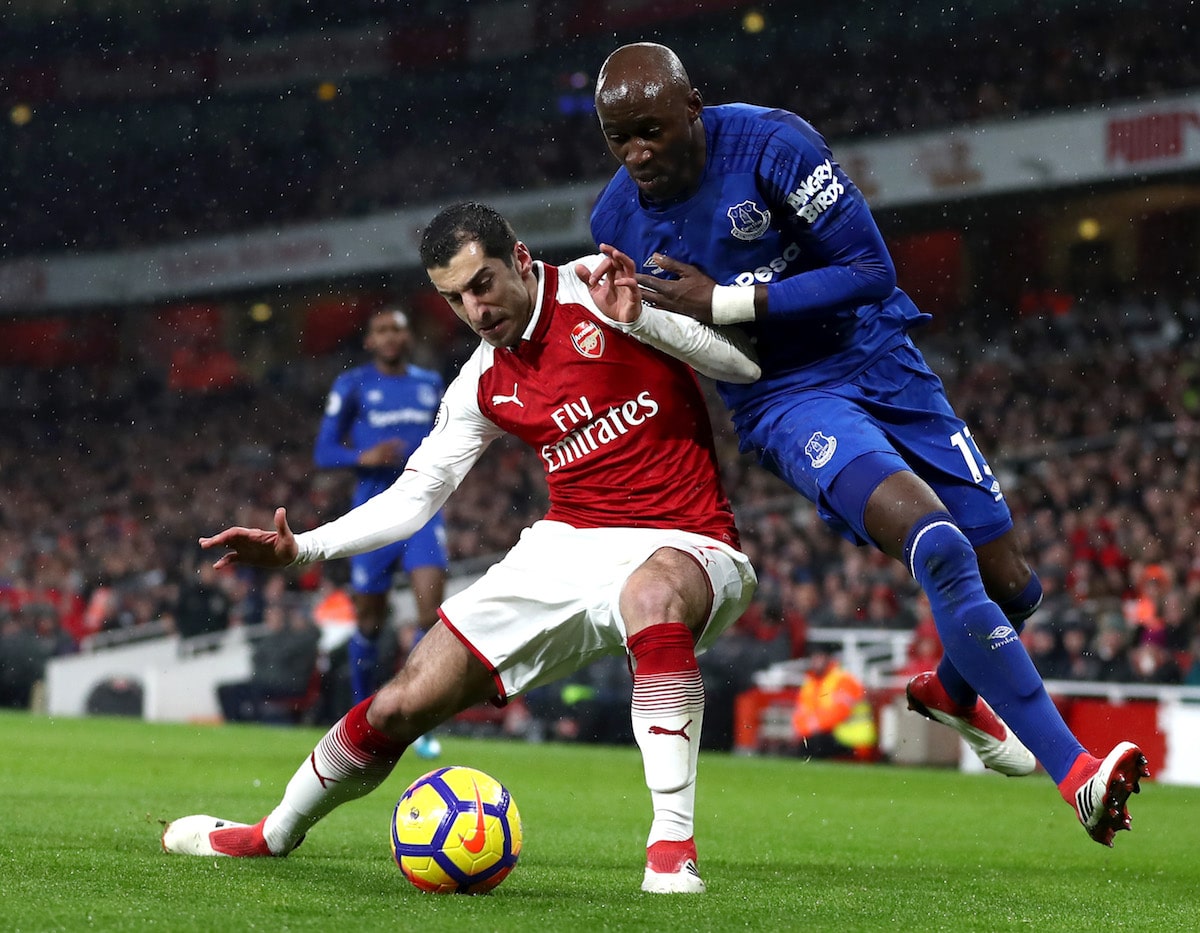 Arsenal have been one of the most effective teams in the Premier League this season when it comes to pressing – their average of 8.8 passes allowed per defensive action in the opposition half (PPDA) is the third-best in the division.

Against Everton, though, they appeared especially aggressive in their pressing duties, preventing the away side from gaining any kind of foothold in the first half and breaking into space effectively time and again to carve out opportunities.

The Toffees struggled desperately against Arsenal's press in the first half, coughing up possession almost as soon as they had gained it.

Allardyce's men proved unable to work the ball out from the back and, in Morgan Schneiderlin and Idrissa Gueye, lacked a press-resistant central midfielder to relieve pressure and carry them forward.

While returning former Gunner Theo Walcott offered some semblance of threat down the right, Yannick Bolasie was ineffective of the opposite flank and Everton failed to bring either winger into play as often as needed.

A reluctant makeweight in Manchester United‘s move for Alexis Sánchez, Mkhitaryan appeared determined to reassert his worth in his first Arsenal start, in the process sending a message to José Mourinho that the Portuguese tactician was perhaps unwise to marginalise the Armenian at Old Trafford.

The 29-year-old was electric against Everton. Heading into the game, Mikhitaryan's confidence had been at a low ebb and he hadn't registered an assist in the Premier League since the third game of the season back in August.

He soon put that right. The former Shakhtar playmaker, starting as part if a fluid trio behind Aubameyang, alongside Özil and Iwobi, was a constant buzzing threat, registering three assists and coming close to opening his scoring account for his new side with a rasping 20-yard effort in the first half that flew just wide of Pickford's near post.

If Wenger can keep Mkhitaryan motivated to this level, Arsenal will have one of the finest creators in Europe on their hands.

After a disastrous first 45 minutes, things could hardly have gotten any worse for Everton after the break. The introduction of Tom Davies, though, added energy, ambition and technical quality to the Toffees' previously soft centre.

The 19-year-old midfielder completed 88.2 per cent of his passes after entering the fray and offered a genuine creative threat, providing two key passes and completing more dribbles (four) than any other player on the pitch.

Dominic Calvert-Lewin, on for Walcott with an hour played, provided directness, pace and fearlessness in attack. The teenage forward pulled back a consolation goal for Everton, denying Petr Čech his 200th Premier League clean sheet, but there was to be no way back for the Merseysiders.