The 2017/18 Premier League season is underway in spectacular style. Two late goals saw Arsenal clinch an enthralling 4-3 win over Leicester City but that only tells half the story.

Arsene Wenger's side went ahead inside 120 seconds through Alexandre Lacazette but their lead lasted just over two minutes as Shinji Okazaki headed home from close range.

Jamie Vardy tapped Leicester in front but on the stroke of half time Danny Welbeck equalised for the hosts. Arsenal dominated possession during the second half but fell behind once again when Vardy nodded in a Riyad Mahrez corner.

It seemed as if Arsenal had run out of ideas but the hosts turned the game around in the dying minutes. Aaron Ramsey struck the equaliser before Olivier Giroud headed in via the crossbar to complete a dramatic turnaround.

It will go down as one of the matches of the season and here are five things we learned from the Gunners' win.

The Gunners' record on the opening weekend of the Premier League season has been extremely poor in recent years.

Prior to tonight's game they had managed to come away with victory from their first league fixture just once in the previous six years. Had Arsenal failed to beat the Foxes then an all too familiar emotion would've filled the Emirates; frustration.

And for much of the second half it looked like that scenario would play out. But late goals from Ramsey and Giroud turned a 3-2 deficit into a 4-3 victory. The monkey is off Arsenal's back.

For the first time in several years, Arsenal have made a winning start. Now they have to build on it and prove to everyone that they are no longer the inconsistent side of previous seasons.

Maguire will prove a bargain signing

Given how ludicrous the transfer market has become this summer, £17million now seems like pocket change.

But that is what Leicester paid Hull City to secure the services of Harry Maguire and, based on his Foxes debut, it was money well spent.

The 24-year-old was superb at the Emirates. He read the game well, making one crucial block to Danny Welbeck in the first half, brought the ball out of the defence calmly and was a threat when he went forward.

It was also his header back into the Arsenal penalty area that led to Okazaki's fourth-minute equaliser.

Sadly for the Leicester centre-back, the only blot on his copybook was a telling one. He was outmuscled by Giroud from a cross into the penalty area and the French striker was able to guide a header into the top corner.

Arsenal were far from full strength against Leicester. Per Mertesacker and Gabriel were ruled out through injury. Shkodran Mustafi was only fit enough to make the bench while Laurent Koscielny was suspended.

Wenger opted to go with a back three of Rob Holding, Nacho Monreal and Sead Kolašinac and it was the wrong call. The trio couldn't get to grips with the pace and movement of Vardy.

The Leicester striker tormented the Gunners defence throughout the game. All the while Mustafi watched on from the bench and Calum Chambers, who enjoyed a productive loan spell at Middlesbrough last season, was in the stands.

Wenger could've introduced the former and moved to a back four but the Arsenal boss is nothing but stubborn and persevered. If the Gunners are to continue with the 3-4-3 system, they need more central defensive cover. 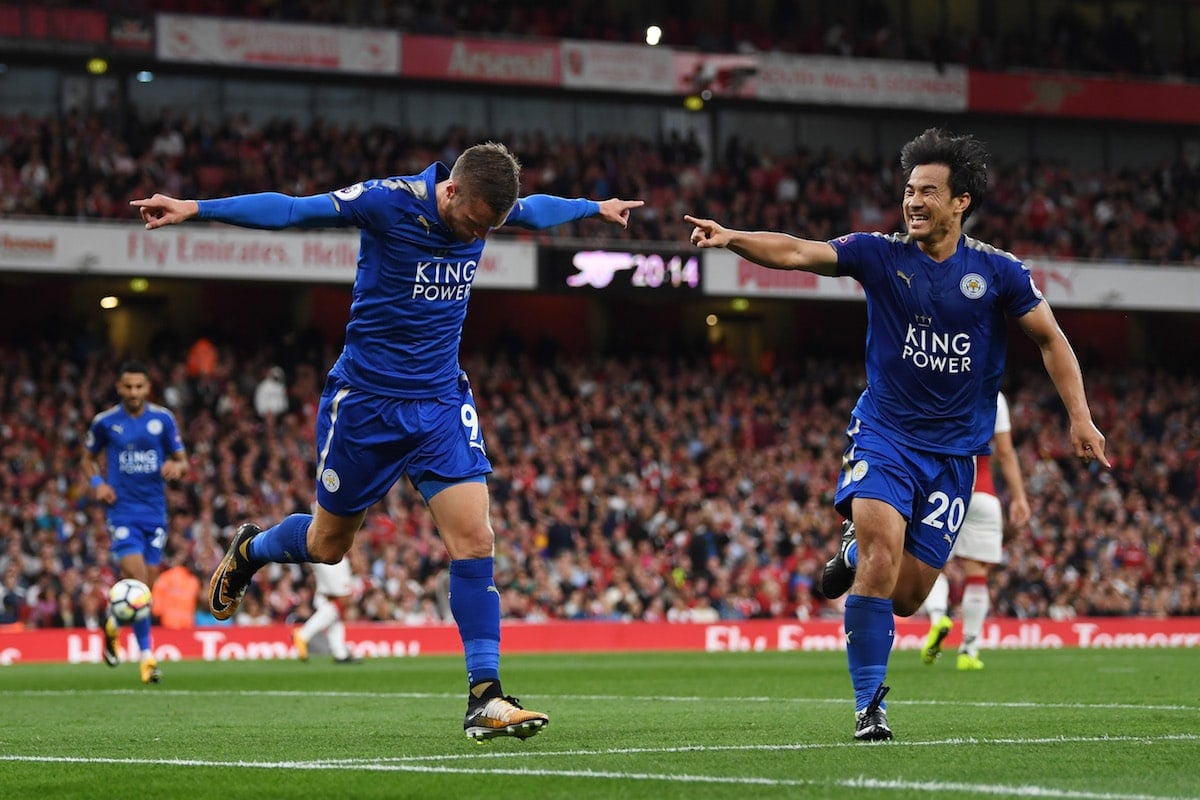 Craig Shakespeare was in a no-lose situation when he took over from Claudio Ranieri last season.

The Foxes players had fallen out with Ranieri and were extremely demotivated. A fresh face was needed and that's what Shakespeare provided.

He didn't change how Leicester played or the set-up, he quite simply was not Ranieri and that meant a great deal to the Foxes players. So they raised their game and the 2015/16 Premier League champions quickly moved away from the relegation zone and into mid-table.

Shakespeare was handed the Leicester job permanently this summer as a result and this season will be the true test of his managerial ability. Based on the first 90 minutes of the season, he is more than capable of matching one of the Premier League's best.

Leicester were motivated and well drilled. They may have struggled to contain Arsenal for spells but they constantly harassed the Gunners and looked to break forward with pace.

The way Shakespeare set-up the Foxes was hardly revolutionary but it was certainly effective. And while the game ended in disappointment, the performance suggests Leicester will be far more competitive this season.

There is little doubt that, when on form, few teams in world football can live with Arsenal when they quickly shift possession around an opposition penalty area. It can be so quick, so incisive and so impressive.

However, a common complaint is that, for all their possession and intricate passing, the Gunners have lacked a clinical striker who will finish the chances created. But Lacazette appears to solve that problem.

It took the striker less than three minutes to open his Premier League account and the goal, an instinctive header, was that of a natural goalscorer.

Lacazette could prove to be the missing piece of the Arsenal attacking puzzle, although it'll be interesting to see how Alexis Sanchez takes to being shunted back out on the left wing – that is assuming he stays, of course.