Arsenal recorded a first Premier League clean sheet under new manager Unai Emery as they saw off the challenge of Everton at the Emirates.

The Gunners triumphed 2-0 thanks to second-half goals from strike duo Alexandre Lacazette and Pierre-Emerick Aubameyang.

But the result was not as comfortable as the scoreline suggests, with the Toffees more than holding their own for large portions of the game, and only some outstanding goalkeeping from Petr Čech preventing the home side's defence from being breached.

Indeed, despite just a 38 per cent share of possession, Everton landed more shots on target (six) than their hosts (five).

Arsenal will be satisfied with their afternoon's work, though, moving on to 12 points for the season and up into sixth position, behind rivals Tottenham Hotspur on goal difference and two points above seventh-placed Manchester United.

Here are the five things we learned from the game. 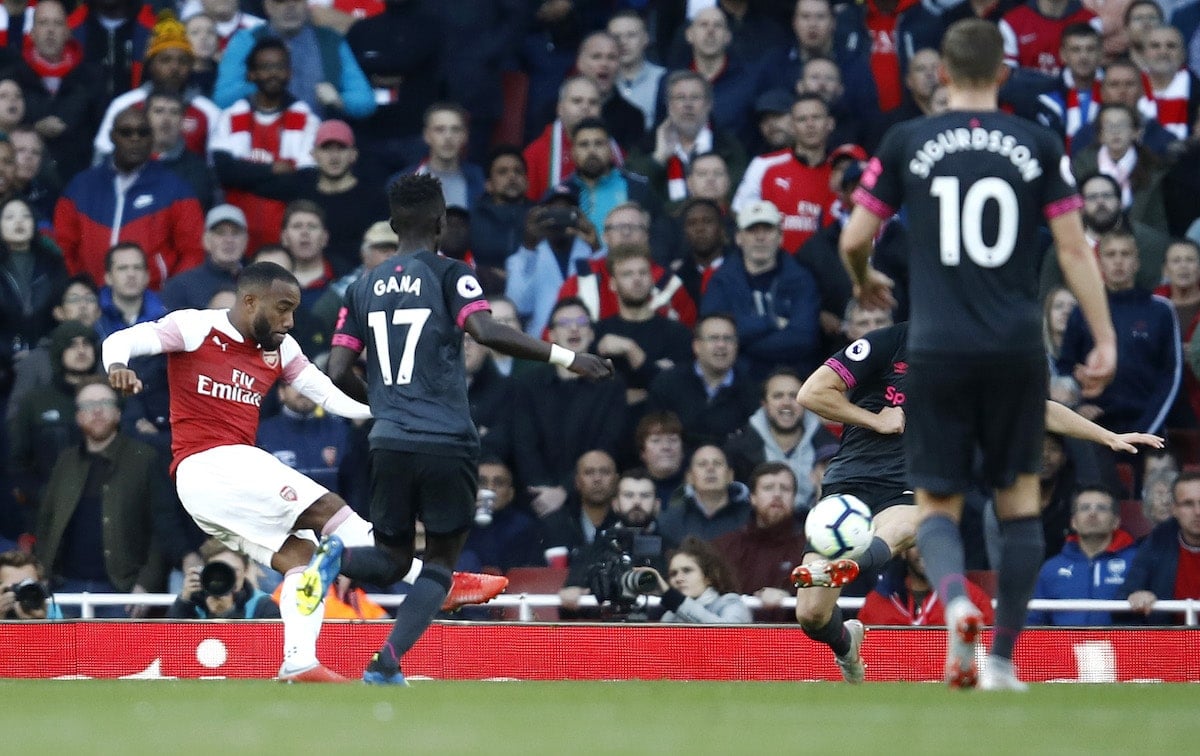 In a game low on technical quality and inspiration, Lacazette provided both in an instant with his 56th-minute strike to open the scoring,

Receiving the ball on the edge of the penalty area from Aaron Ramsey, the Frenchman shifted to his right before sending a sumptuous effort curling beyond Jordan Pickford and into the top corner, kissing the post on its way in.

This was only Lacazette's second Premier League goal of the season, but it is his sixth strike in his last seven starts. And the former Lyon man is proving to be a home banker for the Gunners, with 15 of his 19 goals for Arsenal scored at the Emirates.

While Emery will be glad to have a clean sheet under his belt for the first time in league action as Arsenal boss, the Spanish tactician will be far from satisfied with how his side defended.

Throughout the first half and early in the second, Everton managed to ut through the Gunners' backline with relative ease and consistence, the pace of Richarlison, Dominic Calvert-Lewin and former Arsenal favourite Theo Walcott proving a handful for the home side's ponderous backline.

Arsenal have now won five on the bounce in all competitions, but, on the evidence of Sunday's showing, there is plenty of defensive work for Emery and assistant manager Steve Bould still to do.

Čech back to best

The main reason Arsenal were able to shut out the Toffees was the magnificent form of Čech.

The Gunners goalkeeper has been the subject of no shortage of criticism so far this term, albeit most of which has focussed on his sills – or lack thereof – with the ball at his feet.

Here, though, the 36-year-old proved he can still excel in the primary remit of his position: keeping the ball out of the net.

Called upon five times to thwart the Merseysiders, the veteran shot-stopper was equal to everything thrown at him, rolling back the years and vindicating Emery's decision to once again leave new signing Bernd Leno on the bench.

Far and away Everton's most dangerous player throughout – and, until Lacazatte's opener, looking the most likely man on the pitch to break the deadlock – Richarlison looked every bit a £40million player.

Displaying the strength to withstand the close attention of the Arsenal defenders, the pace to break free and the skill to work shooting opportunities in minimal space, the former Watford man showed why Brazil manager Tite recently selected him for a first senior international call-up.

Everton have been without Richarlison for their last three fixtures, owing to a suspension as a result of a red card against Bournemouth on August 25. With him back, the Toffees are an altogether different proposition.

Defeat at the Emirates means Everton still have just one Premier League win to their name this season, but manager Marco Silva, who is already beginning to face doubts from some sections of the media and the Toffees fan base, can take heart from how his side outplayed Arsenal for long periods.

Unlucky not to be ahead at the break, Everton started the second half well, before Lacazette's strike took much of the wind out of their sails.

The issue was one of sub-par finishing – with Calvert-Lewin and Walcott both squandering presentable one-on-one chances – and coming up against and inspired Čech in the Arsenal goal.