Second-half goals from Victor Moses and Sead Kolasinać ensured the honours finished even after 90 minutes before spot-kick misses by goalkeeper Thibaut Courtois and Álvaro Morata for the Blues handed the Gunners the first silverware of 2017/18.

Little more than a showpiece friendly, neither side will have been putting too much stock into the result, but the fixture provides an opportunity for Arsène Wenger and Antonio Conte to refine their tactics and allow their players to build on-field relationships ahead of the new campaign.

We've analysed the main tactical talking points for each side.

Both sides started nominally in a 3-4-3 formation but there were some stark stylistic differences between the pair.

The Gunners were fielding just one new summer addition from the start in the shape of striker Alexandre Lacazette, although full-back Kolasinać was asked to fill in at left centre-back midway through the first period when Per Mertesacker was withdrawn due to a head injury.

Without first-choice inside-forwards Mesut Özil and Alexis Sánchez it was Alex Iwobi and Danny Welbeck either side of the club-record signing from Lyon.

The stand-in pair offered a greater degree of threat in behind than as is ordinarily the case with Sánchez and Özil starting. Iwobi and Welbeck are both fast, powerful runners and looked to break through the half-space and behind the Chelsea backline at every opportunity.

This forced the Chelsea defence to sit deep but it meant that Arsenal were somewhat starved of creativity. Without Sánchez and Özil coming to meet the ball and thread passes in behind, Lacazette was starved of service.

The £52million Frenchman's game is based largely on his timing of forward runs and deadly one-on-one finishing. Instead, he was forced to come deep to look for the ball. Linking play is not his forte but he did so to great effect in the 22nd minute, making two give-and-gos before curling a delicious effort onto the post with Courtois beaten.

Lacazette was replaced by countryman Olivier Giroud in the 66th minute, ending a frustrating afternoon for the new man.

Iwobi and Welbeck were both lively throughout. Perhaps more effective in their pressing duties than Özil and Sánchez, their energy opened gaps in the final third, but Arsenal missed their star's creators' ability to exploit these openings.

In midfield, the paring of Granit Xhaka and Mohamed Elneny acquitted themselves well, with both men astutely finding pockets of space on a regular basis, escaping the attentions of N'Golo Kanté, and the Egyptian was the one to break ahead of the ball on occasion while his partner held the fort.

Most of Arsenal's success came down the left, where the two-pronged attack of Welbeck and wing-back Alex Oxlade-Chamberlain kept the Premier League champions pegged back, with Victory Moses able to spring forward far less soften than usual. 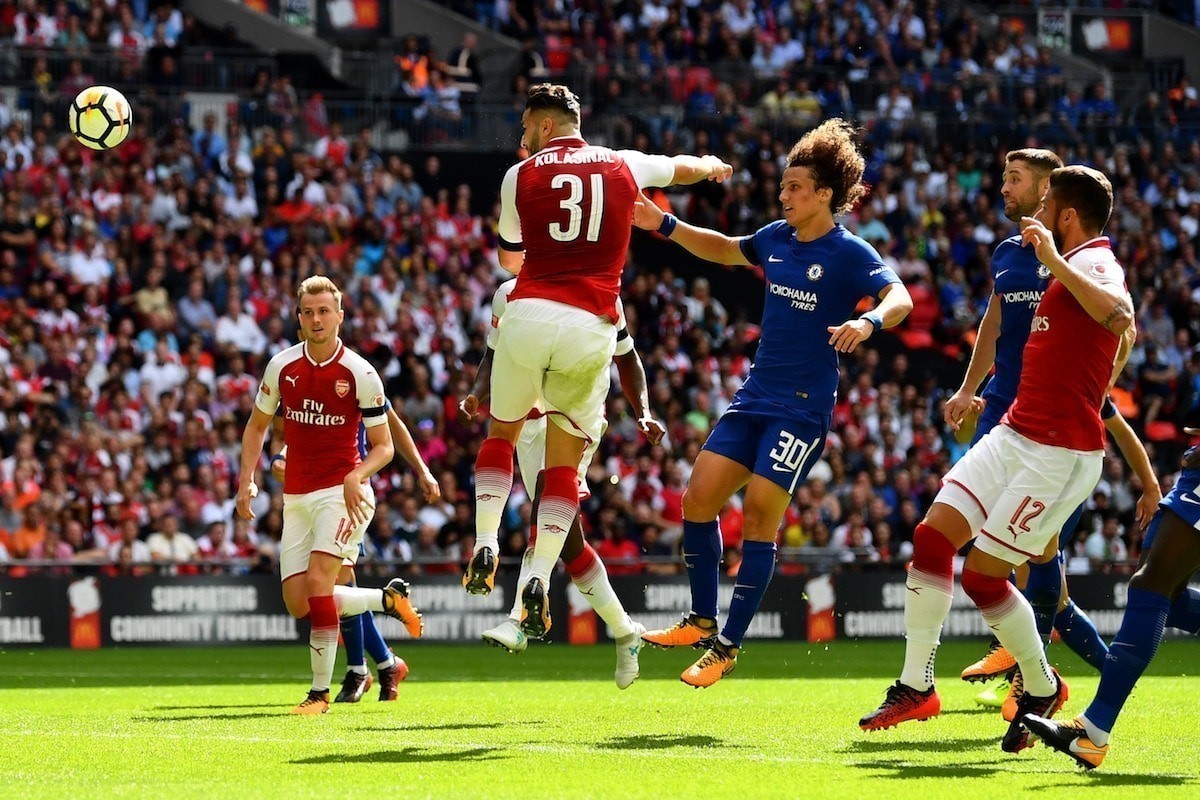 The Gunners were less convincing defensively, but understandably so, missing both Shkodran Mustafi and Laurent Koscielny. Through the sheer force of his physicality, Kolasinać's arrival – the Bosnian equalised via a towering header from a free-kick after 81 minutes – shored them up, but an inability to clear a corner, coupled with multiple lapses in concentration, enabled Moses to score early in the second half.

Overall, the Gunners' display was a positive one, able to exert pressure through midfield and keep Chelsea penned in their own half for much of the game. They just lacked their usual inventiveness in the final third, something the re-introduction of Özil and/or Manchester City transfer target Sánchez should remedy.

The most startling tactical observation to be made of Chelsea's performance was their newfound, almost dogmatic, insistence on playing out from the back.

At every goal-kick, captain Gary Cahill and César Azpilicueta would split, assuming a position either side of the penalty area, close to the goal line, to receive a short pass from Courtois.

This in itself is not a wholly unusual tactic, and has been a regular feature of Pep Guardiola's sides throughout the years. But it mean that Chelsea were looking to build via their two least technically able central defenders – their stoppers – rather than, say, manufacturing a way to get David Luiz on the ball.

For the most part, Arsenal were happy to leave them to it and put pressure on the player receiving the subsequent pass – usually one of the wing-backs. Invariably, when hurried, Chelsea would either cough up possession to the Gunners or concede a throw-in by hurriedly overhitting a pass in their own half.

The Blues' wing-backs have been a crucial tenet of Antonio Conte's back-three system ever since he introduced to last October – after a 3-0 thrashing by Arsenal, no less – and they tended to adopt a slightly higher starting position than their Arsenal counter-parts.

But Chelsea's inability to get a foot-hold in midfield – where Cesc Fàbregas and the usually impervious Kanté were outrun and outgunned by Xhaka and Elneny – meant Moses and Marcos Alonso were soon pegged back and less effective than they had been for most of last season.

In attack, Eden Hazard was sorely missed. The fluency and creativity the Belgian offers was grossly conspicuous by its absence at Wembley, with Pedro and Willian offering, as always, graft and commitment, but little else.

Even more notable by his absence than Hazard, though, was Diego Costa. With new signing Morata deemed not ready to start, Michy Batshuayi lead the line. The Belgian poacher is always alive and alert inside the penalty area, but he does not offer the same kind of physical focal point as Costa, and it showed.

Whenever Chelsea advanced, they struggled to make the ball stick in high areas. The nuisance and borderline brutism of the Brazil-born Spain international was an asset last term; work to do to that end for Conte.

Morata came on for the final 25 minutes and offered the Blues a more direct option, which they duly took, looking to locate the Spaniard with high balls. The former Real Madrid man almost restored his side's lead late on too, heading wide from close range.

Conte decided against starting any of his new signings, with Rüdiger and Morata both coming off the bench in the second half and Tiemoué Bakayoko still out injured.

The Italian tactician will be hoping Bakayoko in particular hits the ground running as the central midfield partnership of Kanté and Fàbregas left plenty to be desired.

The Frenchman was, in typical style, a buzzing presence in the middle of the park, but Fàbregas' inability to cover ground and track runners from midfield left Chelsea exposed. Nemaja Matić, recently sold to Manchester United, might be leaving behind bigger shoes to fill than first thought.