Manchester City got their Premier League title defence off to a winning start, with goals from Raheem Sterling and Bernardo Silva giving Pep Guardiola’s side a 2-0 victory over Arsenal on Unai Emery’s competitive bow as manager.

On this showing, City are still the team to beat, possessing too much quality for an Arsenal side still finding their way under Emery. It was clear that the defending Premier League champions are still not in top form, with the Gunners improving at the start of the second half, but ultimately this was another display of strength from Guardiola’s side.

Emery handed debuts to Sokratis Papastathopoulos and Mattéo Guendouzi, with and Stephan Lichtsteiner and Lucas Torreira coming off the bench in the second half. Summer signing Riyad Mahrez was also given a debut by Manchester City after an impressive pre-season by the Algerian following his club record move from Leicester City.

Sterling opened the scoring after 14 minutes, cutting inside off the left to fire home a low right-footed shot from just inside the Arsenal box. The Gunners never really recovered from that, with Bernardo doubling City’s advantage in the second half, finding the top corner following a Benjamin Mendy cut back.

With Liverpool blowing away West Ham earlier in the day, this result in response might have shaped the 2018/19 Premier League title race already. Here are five things we learned from Arsenal 0-2 Manchester City.

City only likely to get stronger, not weaker

Last season’s Manchester City side became the first team to reach 100 points in Premier League history, breaking all sorts of other records in the process. Conventional thinking dictates that they cannot possibly match that sort of level again, particularly with Liverpool expected to be genuine title challengers this season. This was an ominous performance from the defending champions, though.

City weren’t even at their best, with Kevin De Bruyne starting on the bench after the World Cup, but they had no trouble in sweeping aside a motivated Arsenal side away from home. They claimed 58% of the possession, completing 84% of their total passes, getting 17 shots away on goal over the 90 minutes.

By City’s usual standards, this actually wasn’t the most prolific of performances. They will chart higher numbers than this over the course of the season, which is a terrifying prospect.

Factor in that Mendy is fit again, Aymeric Laporte has had a full pre-season to adapt to the team he joined in January and the continued development of players like Bernardo, Phil Foden, as well as the signing of Mahrez, and Guardiola’s side could counter conventional wisdom. Last season was historic. This could be even better.

New season, new manager, same old Arsenal. Kind of. This was always likely to be a tough opener for Arsenal. Emery might have hoped for a soft start to life at his new club. Instead, he got an opening game against the Premier League champions, with a trip to Chelsea looming next week. And so what the Gunners produced against Man City cannot be taken as a total illustration of where they are in their development.

There were some hairy moments, like when Petr Cech very nearly passed the ball straight into his own net. In fact, the Gunners had problems playing out from the back all game, with the Emirates crowd even sarcastically cheering when Cech eventually decided to stop playing passes from goal kicks. There were also a series of loose passes from Arsenal further up the pitch, prompting groans from the stands.

But these are problems with the new system being implemented at Arsenal by Emery rather than issues with the personnel. The Gunners tried to match City with their passing game but ended up playing just 425 passes compared to City’s 581, with just 358 short passes. Against lower calibre sides, this will be far more effective, but against Guardiola’s side, they were out-classed by an outfit that has had the benefit of two years of coaching under their manager.

What’s more, it will take time for Emery to untangle the culture of defeatism that has taken hold of the club over the Wenger years. Particularly in defence, it was clear in this performance that Arsenal will require more than one transfer window to scrape away at the rot. This was the start of a long process for the Gunners in the post-Wenger age.

Guardiola finally has his Dani Alves figure at City

Last summer, Dani Alves was expected to become a Manchester City player. The Brazilian had been a key figure for Guardiola during his time at Barcelona and so the Catalan wanted a reunion with the full-back in the Premier League as he overhauled his squad. Of course, Alves performed a late u-turn to sign for Paris Saint-Germain. A year later, Guardiola finally has his Alves-like figure.

City absorbed the loss of Mendy to injury well last season, but it was obvious in their opening Premier League win against Arsenal the extent to which the French full-back raises his team’s level. The return of Mendy allows Guardiola to go full Guardiola, particularly in the way his side plays in possession at the back. 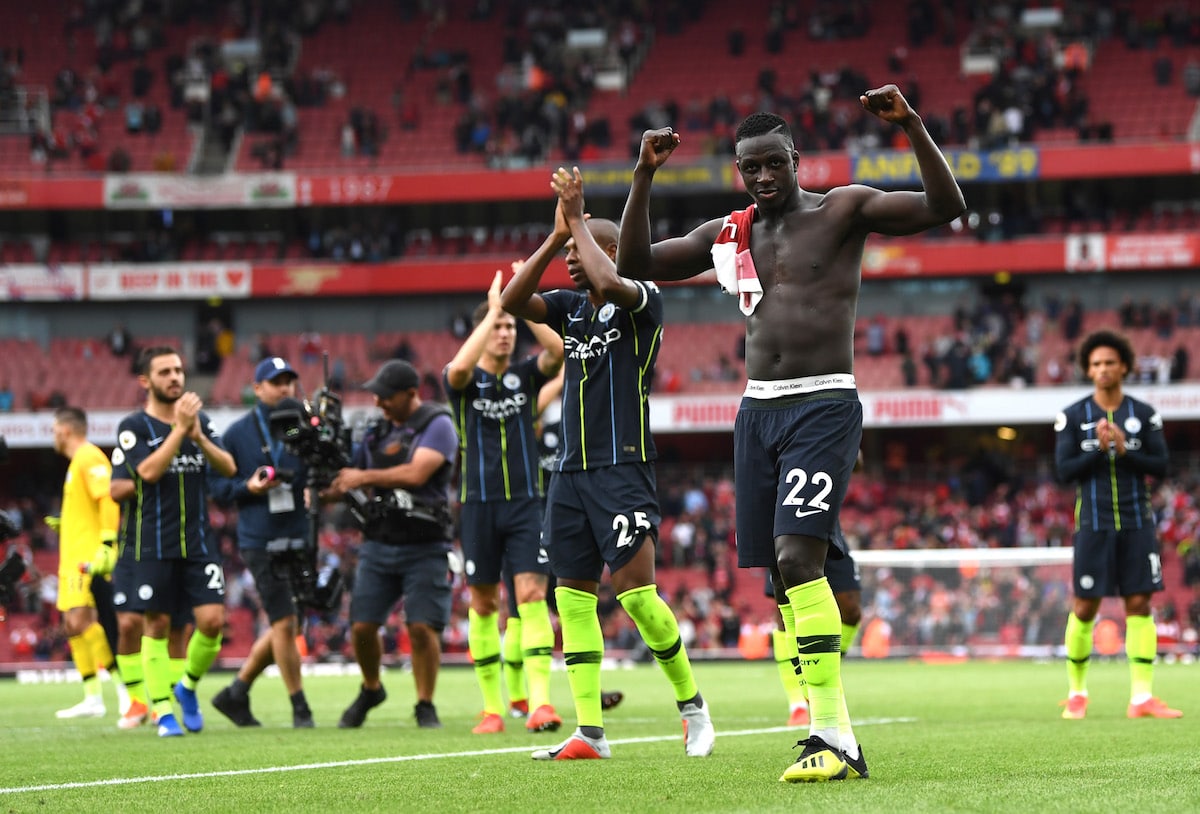 Just as Alves did all those years ago for Barça, Mendy played as an out and out winger when Man City had the ball, even pushing inside to link up with the midfield play. But rather than leaving the back three as a narrow trio, as most teams would, Guardiola had them spread as wide as the pitch would allow.

Laporte was the one sent to the left touchline, with Kyle Walker sent to the right. This gave John Stones options on the ball, but also heaped the pressure on the centre back not to give possession away cheaply. Guardiola is a gambler and this is the sort of risk he likes to take. With Mendy back and fully fit, contributing the assist for both goals against Arsenal, Manchester City are edging closer to becoming a pure Guardiola team. 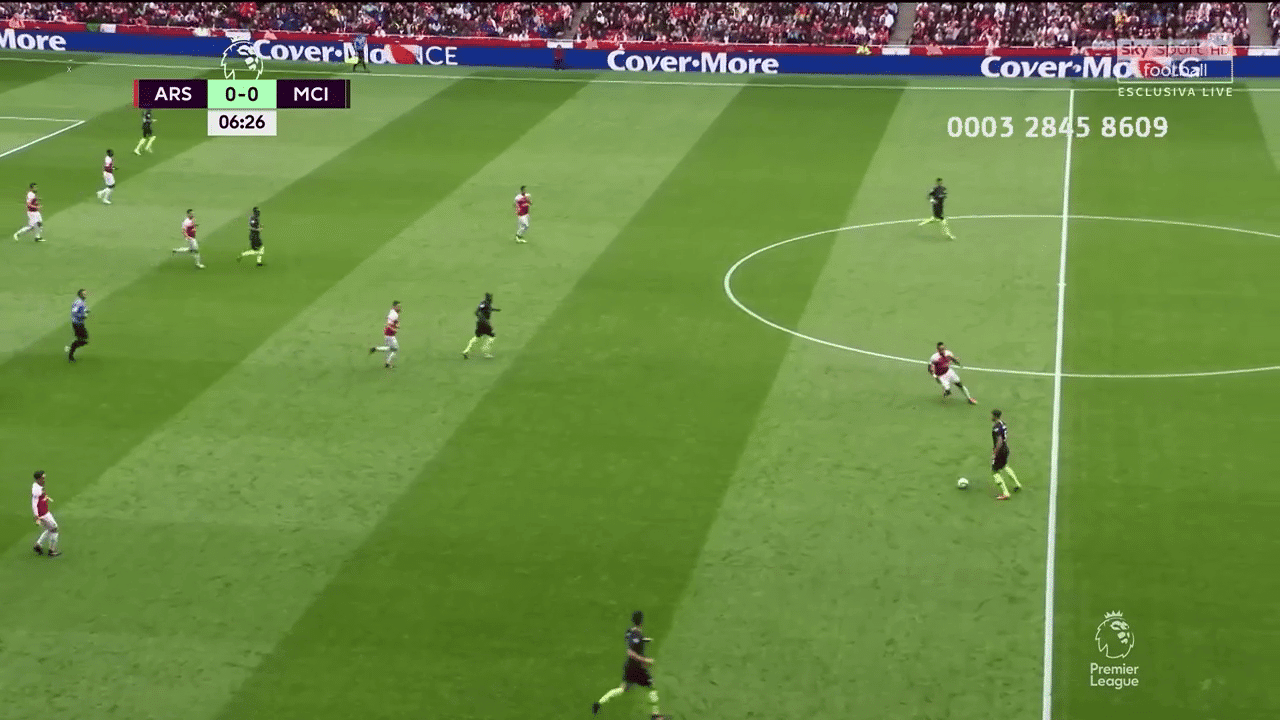 Can Arsenal play out from the back with Petr Cech in goal?

On the whole, Cech didn’t have a bad game for Arsenal, making a number of key saves to keep Man City’s lead at 1-0 in the first half. But the veteran goalkeeper struggled more than once with the ball at his feet. The worst moment came as Cech very nearly passed the ball straight into his own net, somehow giving away a corner kick after a back pass.

Only Guendouzi (47) and Granit Xhaka (43) made more passes than Cech (42) against Man City. However, Cech also recorded the third worst pass success rate (73.8%) of any Arsenal player on the pitch. That is perhaps to be expected of a goalkeeper, but in many of those misplaced passes were some hairy moments.

Of course, Arsenal signed a new goalkeeper over the summer. It was somewhat surprising that Bernd Leno didn’t start against Man City, with most expecting that the German will eventually replace Cech as the Gunners’ number one. That process could be hastened by Cech’s inability to play with the ball at his feet. It has never been a strength of his game, but under Emery, it could be brutally exposed.

The Silva transition is in progress 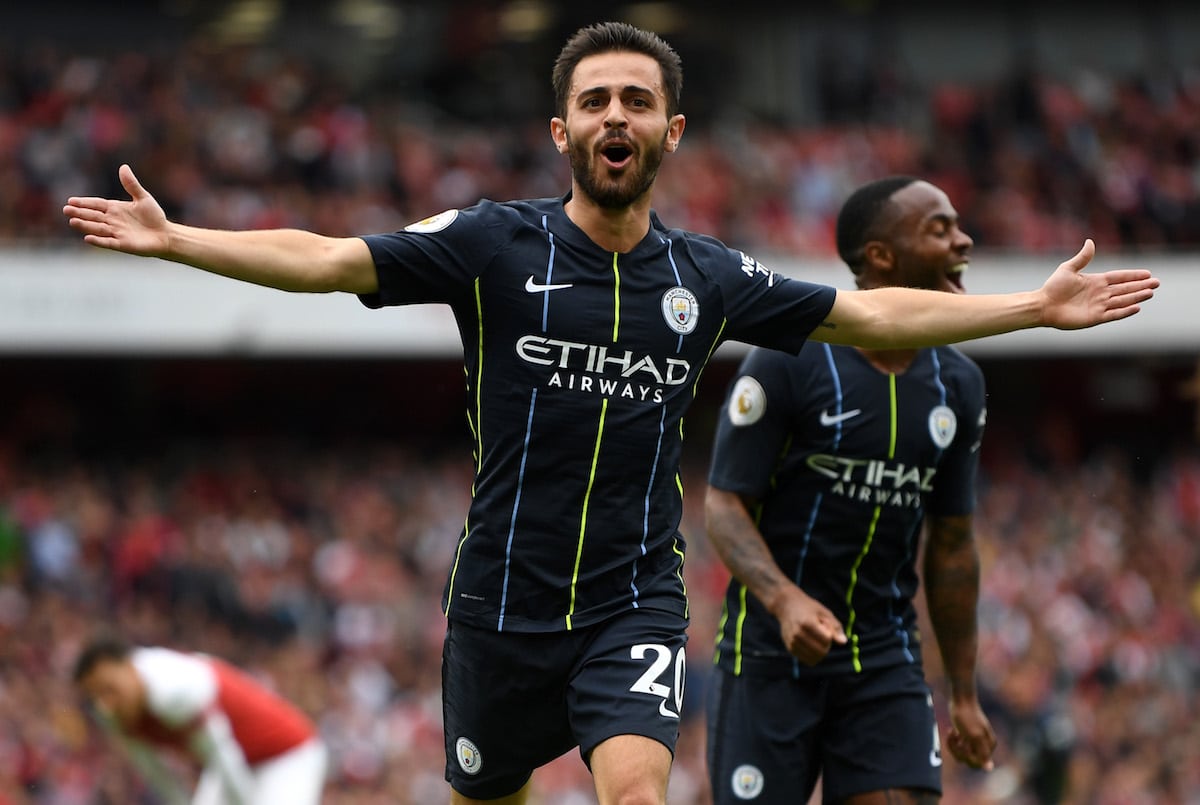 In Bernardo and David Silva, Man City boast two of the best creative midfielders in the European game. The two players share more than just a surname – there are distinct parallels to be drawn between the way they find space off the frontline, the way they can pick a pass and the way they carry a goal threat too.

Silva is a City legend but is fading as a physical force, with the Spaniard left out of City’s squad for this game. Bernardo, on the other hand, is getting better and better, finishing last season strongly and coming into this campaign on the back of a good pre-season. Guardiola, it would seem, has started the transition between the two Silvas, with Bernardo becoming an increasingly key figure.

Bernardo is afforded a freedom that few other players in Guardiola’s system are. He is allowed to take risks, with only Ederson registering a lower pass success rate against Arsenal (69.4%). The Portuguese international’s movement is clever, with his goal (scored from his only shot of the game) scored after a late run into the box.