When he was asked about the reported interest in the pair from both Manchester United and Manchester City, he had this to say: “It’s impossible. It’s no surprise, of course. You’re talking about the two best full-backs in the country.”

It’s a bold claim but just how true is it?

These days, because of how much football has evolved, the value and suitability of a player is determined by the system they’re used in. If they’re playing in a role which hides their weaknesses and showcases their strengths then they’re destined to impress. However, if you’re asking a defensive full-back to play almost as a winger, their limitations will be hard to ignore and they’ll be rightly criticised.

So is there ever a best and a worst? Or are there just players being used effectively and ones being mismanaged? 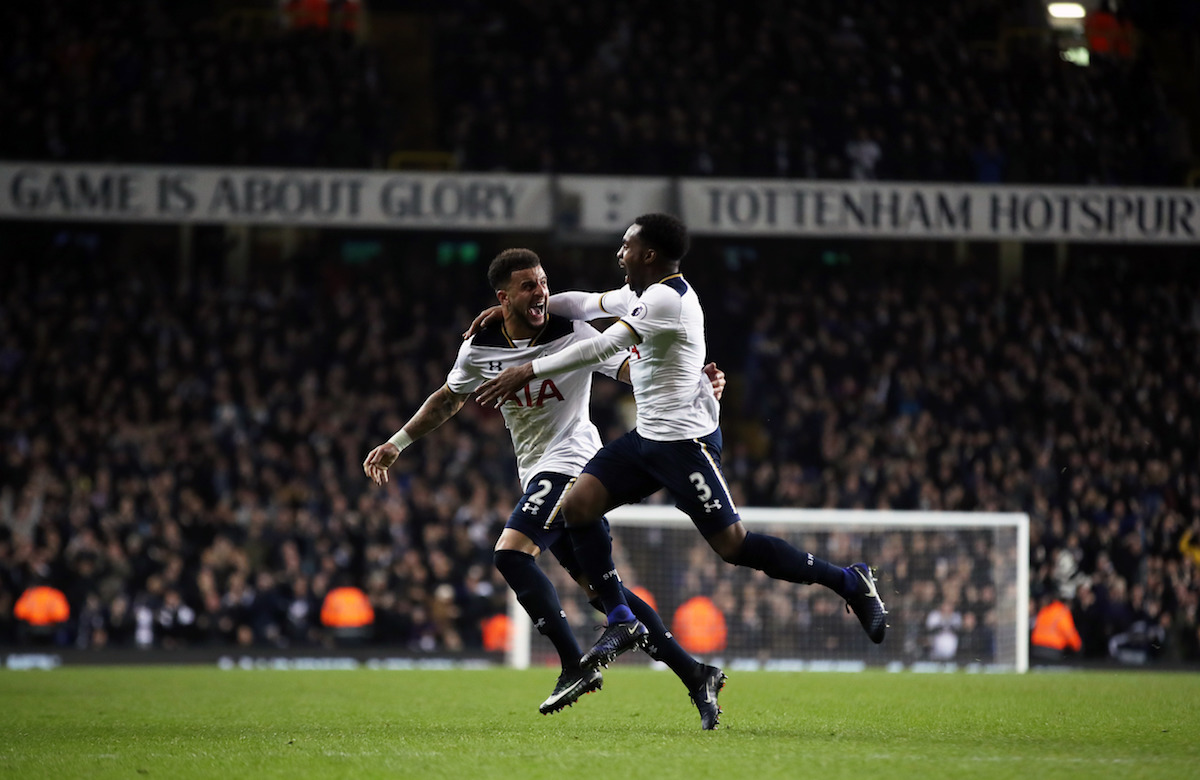 While it’s difficult to give straightforward answer, it is hard to look beyond the Tottenham pair, with both excelling under Pochettino. They are comfortably the best two full-backs in the country for the Spurs system and a few select others. They are perfect for Pochettino.

Spurs have used different starting systems this season but one things that’s been the constant is the fact their width comes from the full-backs/wing-backs. More often than not, Pochettino sets his teams up to look to dominate the centre of the pitch meaning the wide forwards; the likes of Christian Eriksen, Heung-Min Son, Moussa Sissoko, Dele Alli and Erik Lamela, all find themselves in central areas, either behind or ahead of Harry Kane. This leaves a lot of space in the wide areas for the full-backs to exploit. 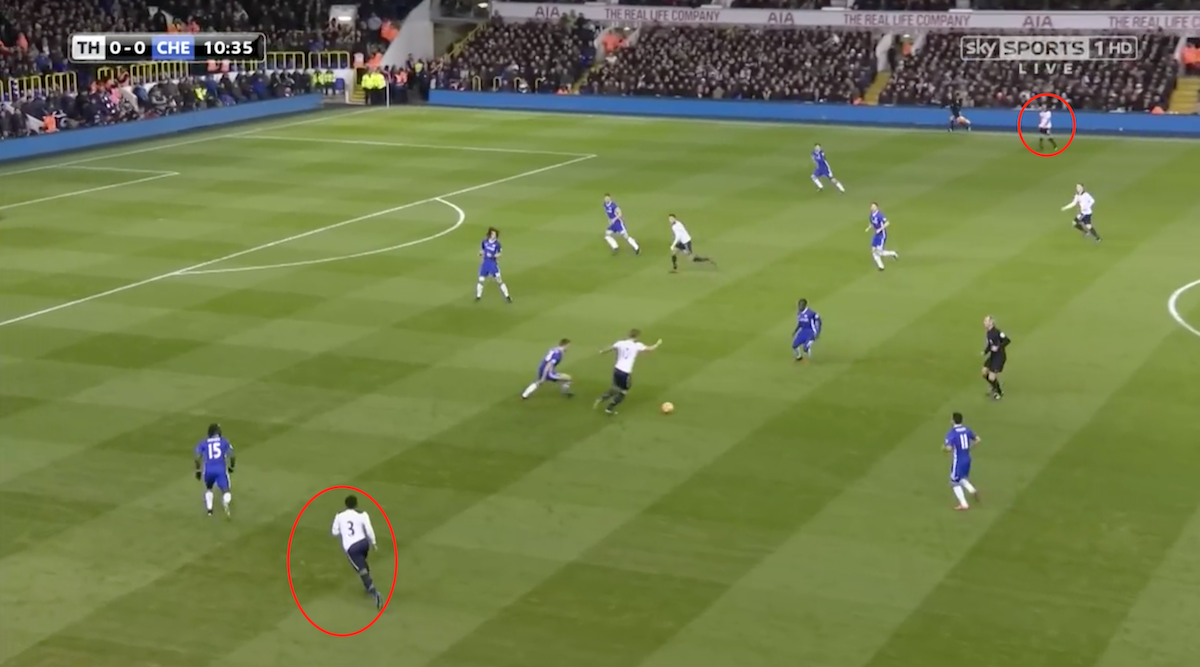 In the picture above, taken during the 2-0 win against Chelsea, you can see Rose and Walker highlighted in wide areas. Both are practically one on one with the Chelsea wing-backs, meaning Kane and Alli are able to work the three central defenders. It was a common theme in both matches against Conte’s men with Pochettino looking to nullify the threat of the Chelsea wing-backs and exploit them defensively.

In the first meeting it backfired but in the second game it worked well.

The reason Walker and Rose work so well in the Spurs system is because the manager doesn’t keep them on a leash. They’re allowed to attack, safe in the knowledge Victor Wanyama and the centre-backs are covering them defensively. It’s in the final third that their class really shows.

The pair are usually praised for their speed, overlapping runs and crosses (especially Walker who has learnt to measure his crosses with unnerving accuracy) into the area. But it’s the stuff that goes under the radar which make them stand out from the rest. 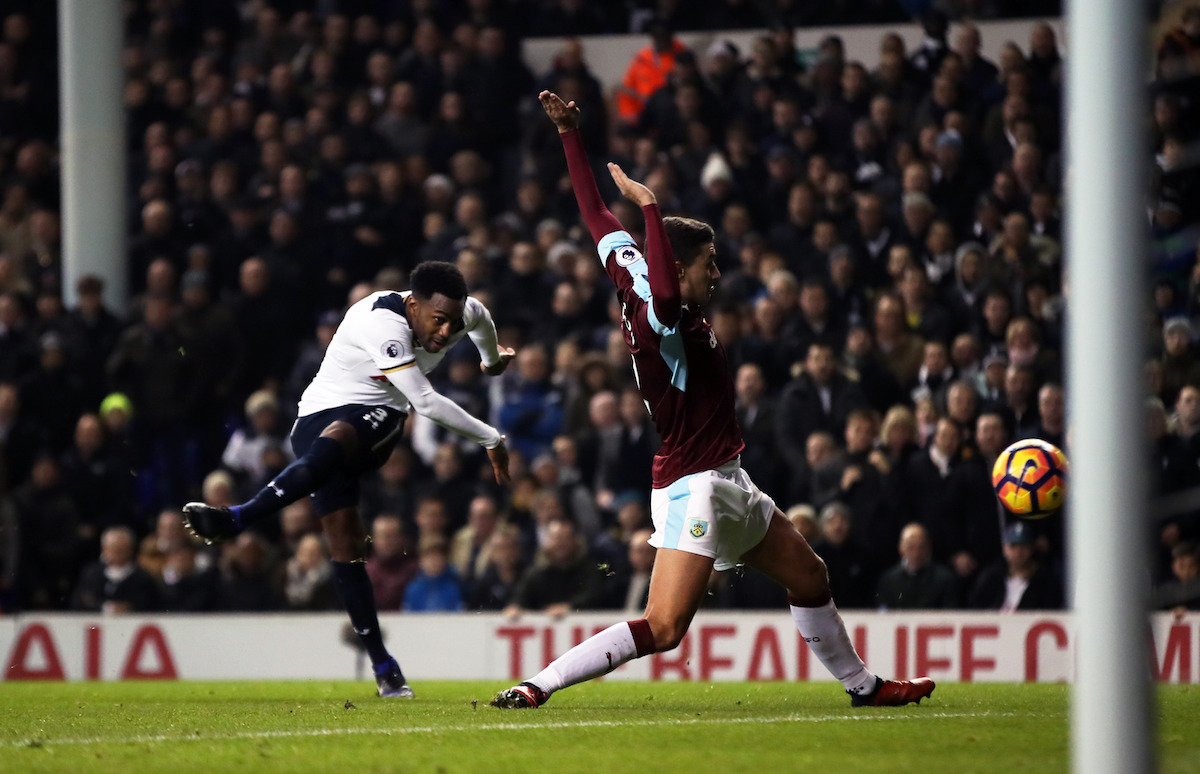 No full-back in the Premier League has made more tackles per 90 minutes than Rose (3.1). The 26-year-old also has a  77.5 percent pass success rate from 45.5 passes he attempts per game. He’s also scored two goals and has a further two assists to his name in the league, and makes 1.3 interceptions and wins 1.5 aerial duels, but is dribbled past 1.2 times per match. 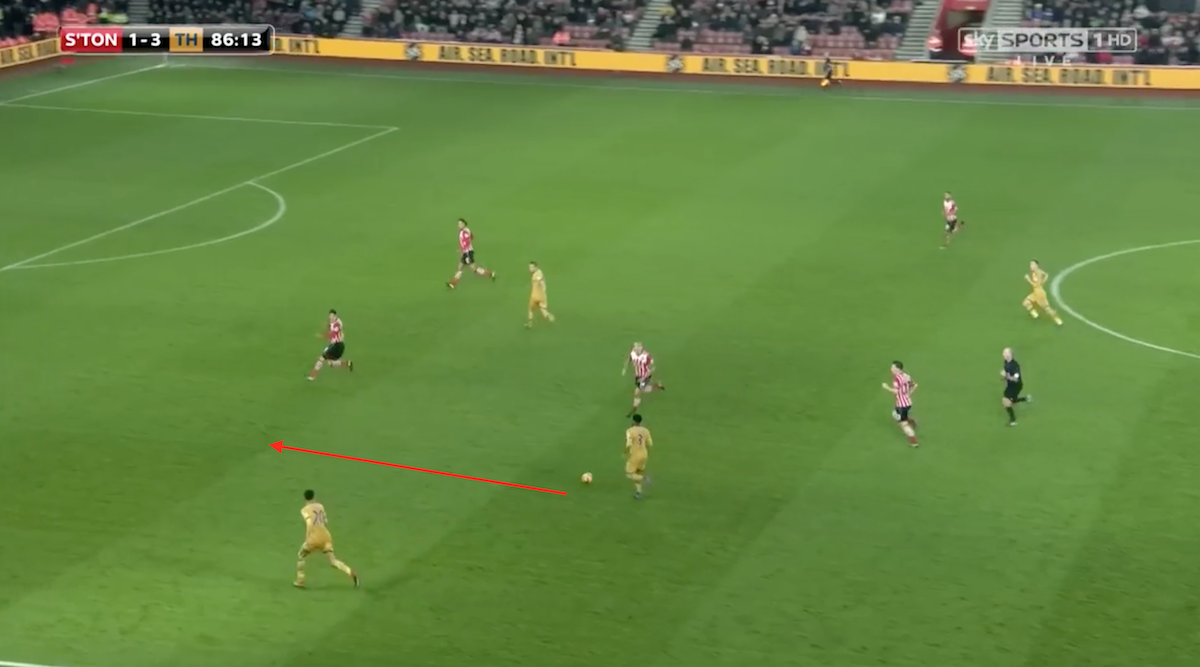 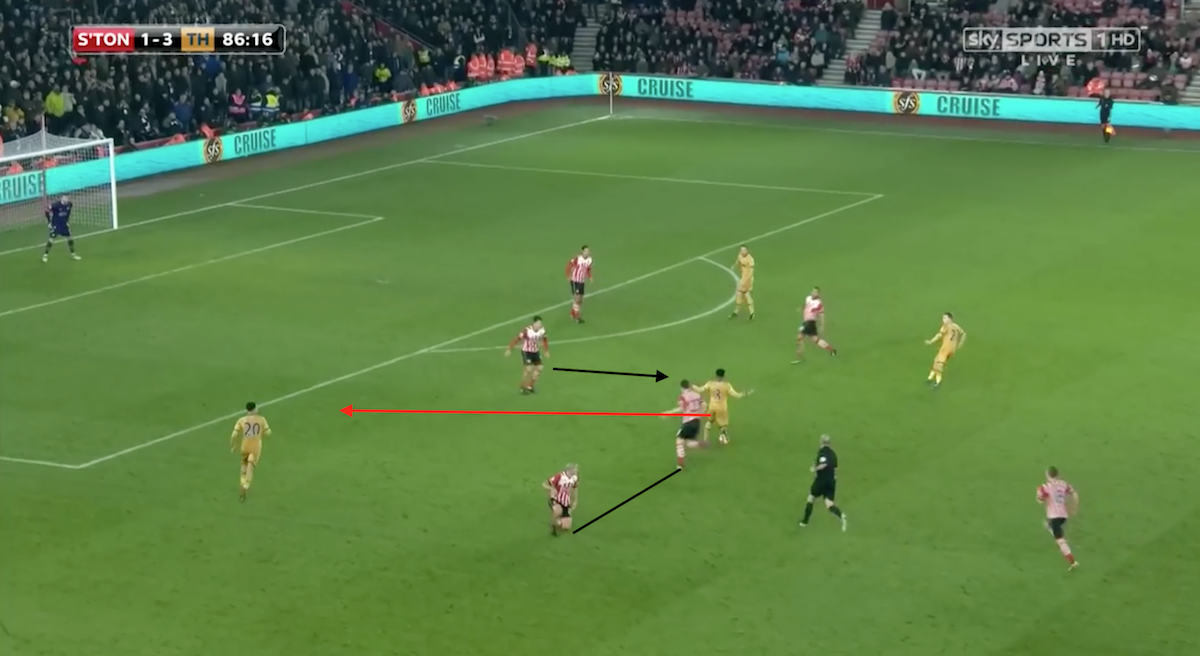 In the above two pictures you get to see how intelligent Rose is. In the first picture there is a pass on to Alli, shown by the red arrow, but the Southampton defender is already anticipating the pass and looks to move out to intercept it. So Rose delays the pass, dribbles past Oriol Romeu and fends off the retreating Southampton man before playing a pass with his weaker foot to put Alli in on goal for the fourth.

He’s confident on the ball and has bags of ability, evidenced by the fact he carries the ball into a central area, engages the centre-back and frees up the Spurs man on the left. It’s rare to find a full-back with such composure in the final third but he did start off as an attacking midfielder, so that will play a part. 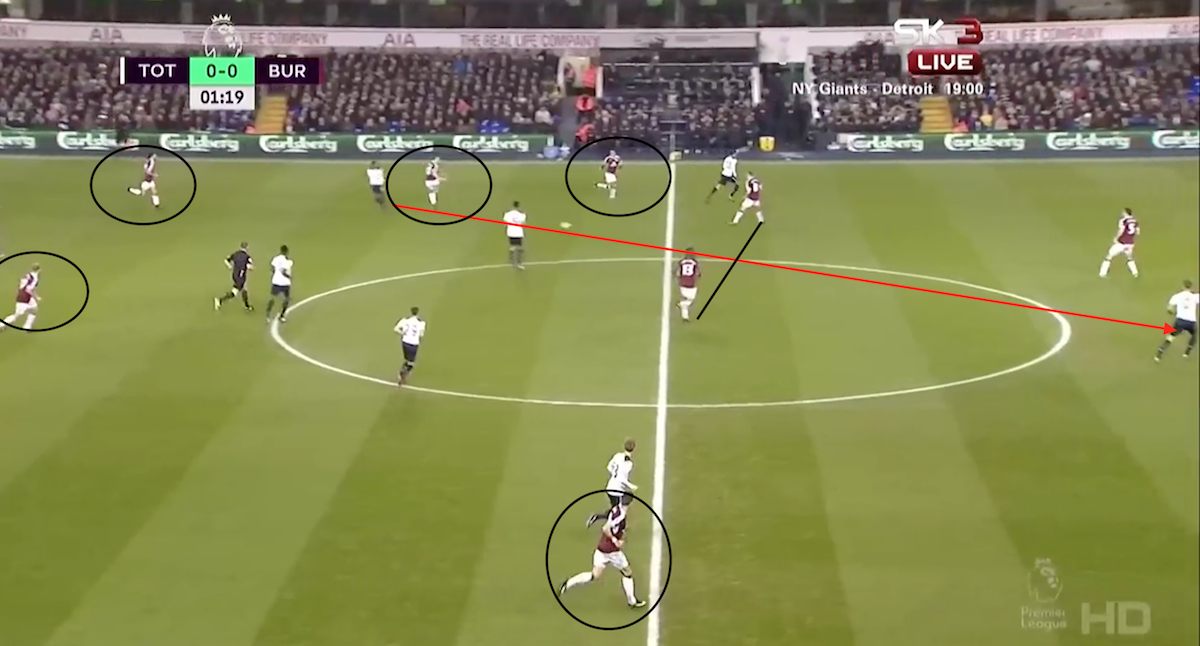 Here, against Burnley, you see Rose hit a pass a deep-lying playmaker would be proud of to start off a counter attack. It’s a pass which shows great technique.

The away side had been on the attack with men committed forward, five are circled and there is one just off screen. Rose wins the ball back and plays an incisive pass between the central midfield two, who aren’t set after the ball had been lost, and Harry Kane is in against the defender.

With so many teams now adopting a high press, it’s vital that every player on the team is able to break the defensive lines/high press with passes. Spurs are spoilt with Rose and Walker. 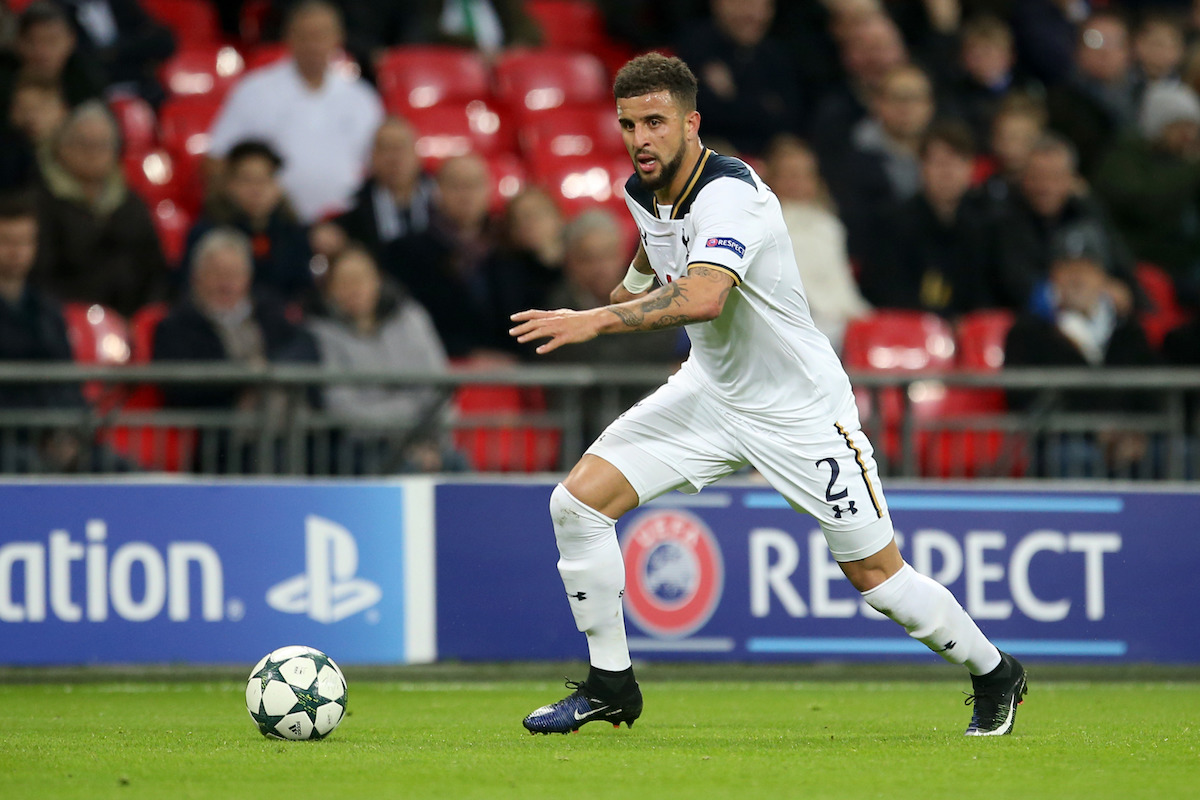 Walker hasn’t found the net this season but he does have four assists to his name. He’s winning on average 2.2 aerials per 90 minutes to go alongside the 2.6 tackles and 1.2 interceptions he makes. He’s completing 80 percent of the 46.5 passes and he’s dribbled past just 0.5 times per match.

Not to be outdone by Rose, Walker shows what he can do on the ball. 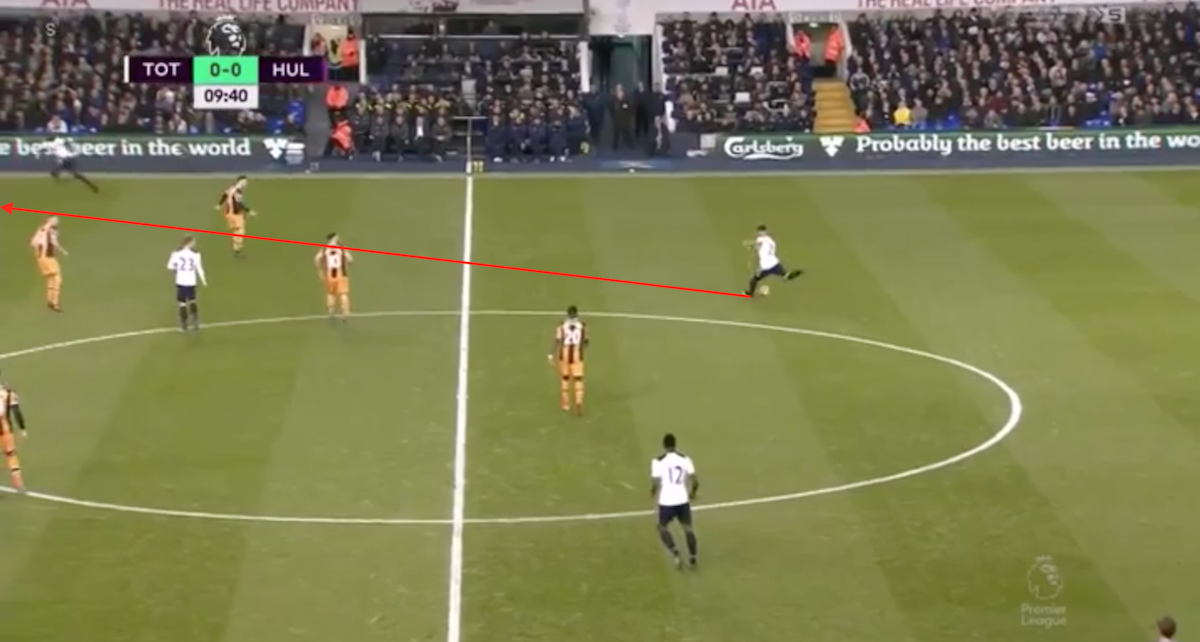 In the picture above, taken against Hull City, the away side are using the half press, meaning they’re comfortable allowing Spurs to have possession in their own half but as soon as they reach the halfway line they will be pressed in an attempt to repel them. However, Walker nullifies this press with an incisive ball which takes out the Tigers' midfield and stretches their defence. Sissoko gets on the end of the pass and Spurs win a corner. 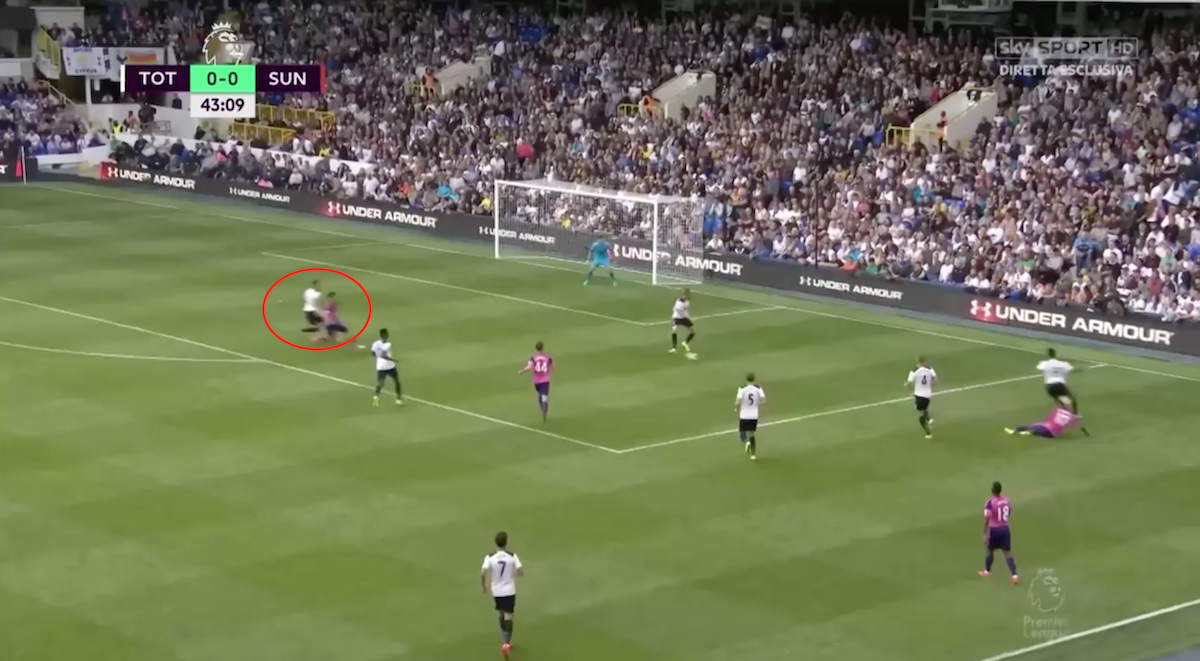 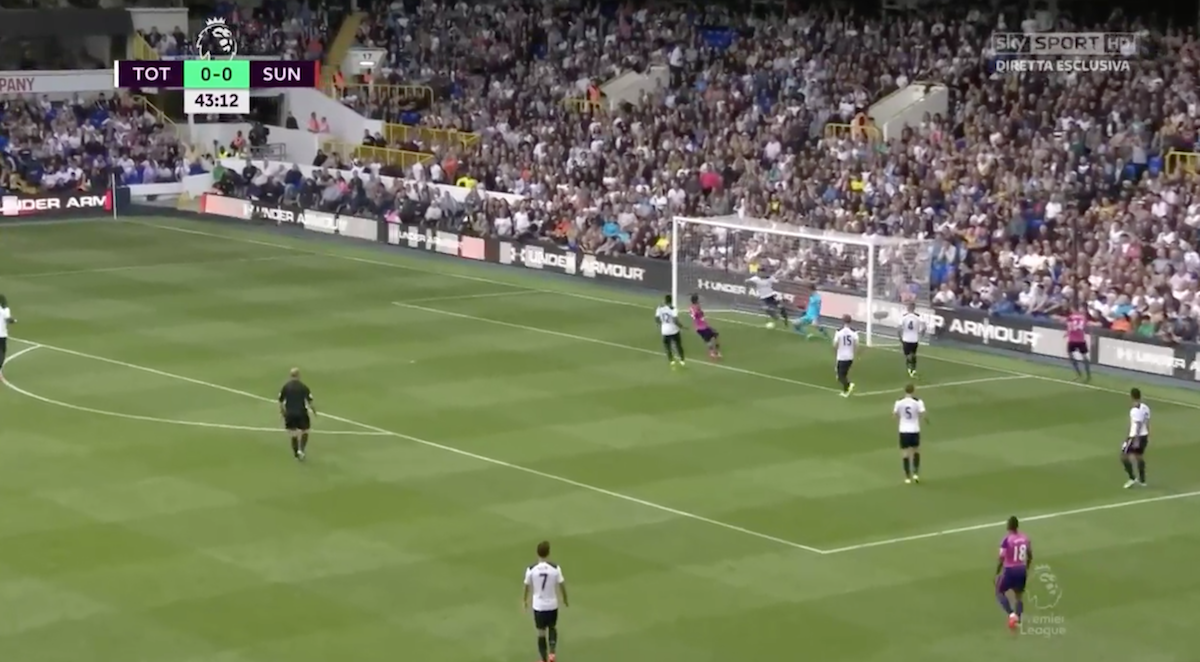 Walker is often accused of being lazy with his defensive play, but he’s switched on these days. He tracks the Sunderland man into the penalty area and then get’s back onto the line to clear the ball away.

They’re both well rounded full-backs who are allowed to attack, but can defend when called upon: gold dust in the modern market. The reports claimed both City and United had put together a £60million package for the pair, but with Chelsea spending a reported £25million on Marcos Alonso, Daniel Levy shouldn’t be answering calls for anything less than £80million.

Fans will never agree that the Tottenham two are the best in the league — Arsenal fans will obviously prefer Hector Bellerin and Nacho Monreal; Chelsea fans quite like the look of Alonso; Antonio Valencia is putting in some dominant displays at right-back for United under Jose Mourinho; Pablo Zabaleta is a cult hero at Manchester City and Liverpool now have the marauding James Milner down their left flank and Nathaniel Clyne on their right.

But if you were asked as a neutral to pick your best Premier League XI, would you really put any of them ahead of the Rose and Walker?